So much has changed in the world since we found ourselves in the cockpit of Codemasters’ F1® 2019.  A pandemic has swept the world, forcing many of us inside, even Formula 1 as a sport came to a grinding halt.  But Codemasters have been hard at work, ready to deliver the realism, breathtaking visuals, and precision gameplay that’s been at the forefront of racing sims.  And on the weekend of Formula 1’s return in Austria, F1® 2020 launches and builds upon the greatness of the series, while bringing gamers new modes, teams, liveries, and experiences.  You’ll need nerves of steel and blistering fast hand-eye coordination to stand on the podium with the greats in this game.

As a massive Formula 1 fan who will take any opportunity to experience its open-wheel action, I was blown away at the steps Codemasters took to deliver the closest experience one can have to driving a Formula 1 car.  As we all wait to see if the great Lewis Hamilton can equal the championships of the winningest driver in F1 history, Michael Schumacher, F1® 2020 pays homage to Michael by releasing the Deluxe Schumacher edition.  With this edition, players will have access to a plethora of Michael’s most iconic cars from teams such as Benetton, Jordan, and Ferrari, his race suits, and even seeing his memorable celebration when taking home a first-place podium.  F1® 2020 not only feels larger in scope when it comes to circuit venues and giving the player more of a hands-on approach to race decisions, but the cars feel more dynamic than ever.  Even at blistering speeds, you can see the stunning levels of detail in the circuits and the cars as you race wheel to wheel with them.  While the visuals gave me a deeper sense of being in the world, it’s the options that are available that kept me begging for more. 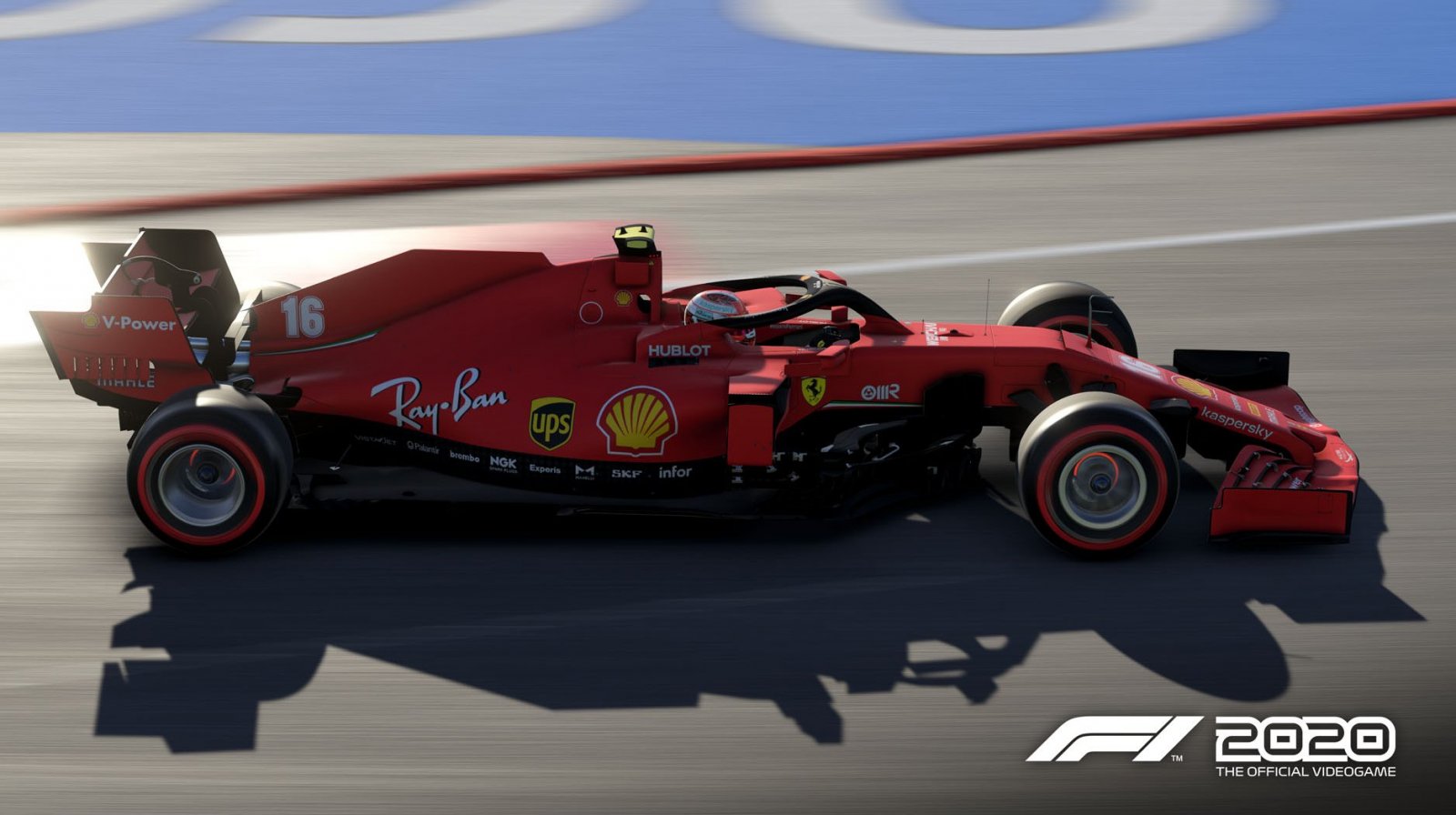 I won’t lie, I was a bit overwhelmed at the amount of game modes at the selection screen, but I quickly dived in as everything is presented in an orderly fashion.  I must give kudos because when it comes to the menus of racing games, they either work or don’t.  Most can be convoluted with inefficient mode selections, making you dredge down into submenus as you look for your selection, but F1® 2020 has learned from the failures of others.  Now, the pet peeve of every PC gamer is knowing that a PC port of a game can be downright unplayable, but Playing F1® 2020 on PC, even before the final updates reached us, its build is stable and impressive.  I was floored at the many options available to tweak and tune for peak performance of my PC.  Even with the settings maxed out and playing on a Nvidia 1080Ti (not a slouch by any means), I reached over one-hundred FPS easily while racing.

As expected, you can start a career mode and choose your favorite driver on your favorite team.  Like F1® 2019, the Career mode is all about giving you the experience of a race weekend and putting you in the shoes of the fastest drivers in the world.  You can also begin your career from the Formula 2 ranks and work your way up, giving you the full experience of what it likes to earn your seat.  In my first few minutes of trying Career mode and finding myself behind the steering rack of a Formula 2 car, there is no question that there’s a stark difference between the cars from last year’s game. 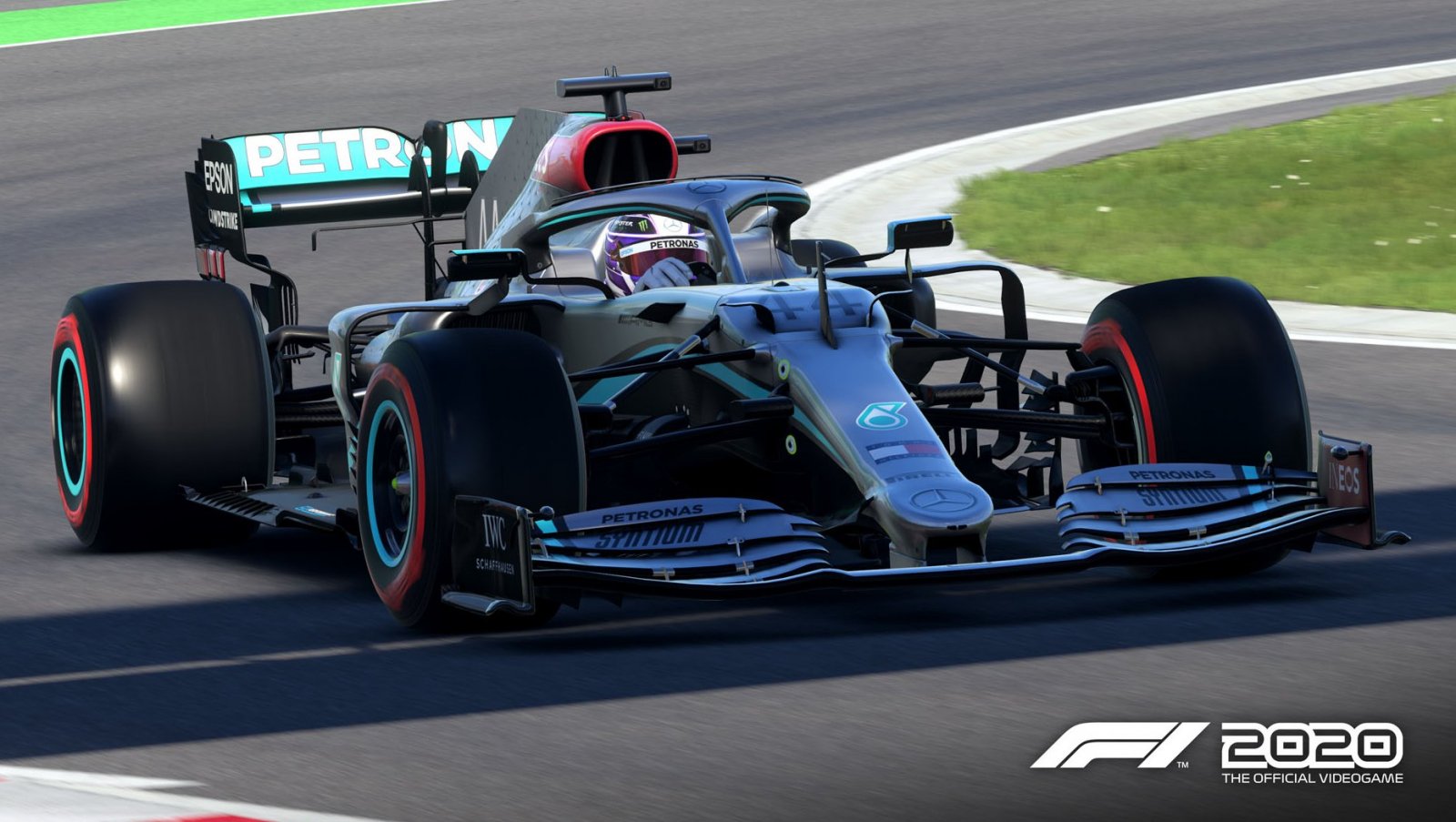 Mercedes for the win

The sound and design of each car show that the developers took their time in giving each car and team their unique place in the game.  Turbos whistle, tyres screech as you lock the breaks into a turn, and shards of carbon fiber fly off, giving a sense that everything in the environment is dynamic.  Like previous iterations of the game, weather is dynamic and plays into your driving style and how you prepare for a race.  In typical fashion, you can use the race weekend’s practice sessions to prepare for qualifying and race day, or go straight into qualifying, if you’ve got the experience.  For those who aren’t initiated in the F1 world, there’s also new options for those who are coming to grips with the handling and performance of an F1 car.  After getting my bearings in a Formula 2 car, I went back and explored the menus more where I was shocked to see that Codemasters have included a split-screen option, allowing for couch co-op play.  With this being a relic option, but one that’s often requested by gamers, it’s good to see that Codemasters have listened.

But F1® 2020 wants you to put your own stamp on this game.  You can create your own driver in Career mode, allowing them to race against the best drivers and teams in the world.  This also translates into the new My Team mode.  My Team mode is more than creating a driver, it’s creating a new team from the ground up as the eleventh team on the grid.  You’ll act as both owner and driver, wearing many hats to be successful.  I immediately hopped into this mode for a chance to create a lasting legacy against some of the greatest racing drivers and teams.  Here, you’ll get to create your own driver, choosing their country to represent, giving them a cool name, and even designing their race suit and helmet.  Next, you’ll finally get to see how and why teams have certain liveries plastered over the car.  You’ll choose a primary sponsor for the team who injects cash into the team for them to operate.  You’ll have a few options here, each having their own stipulations. 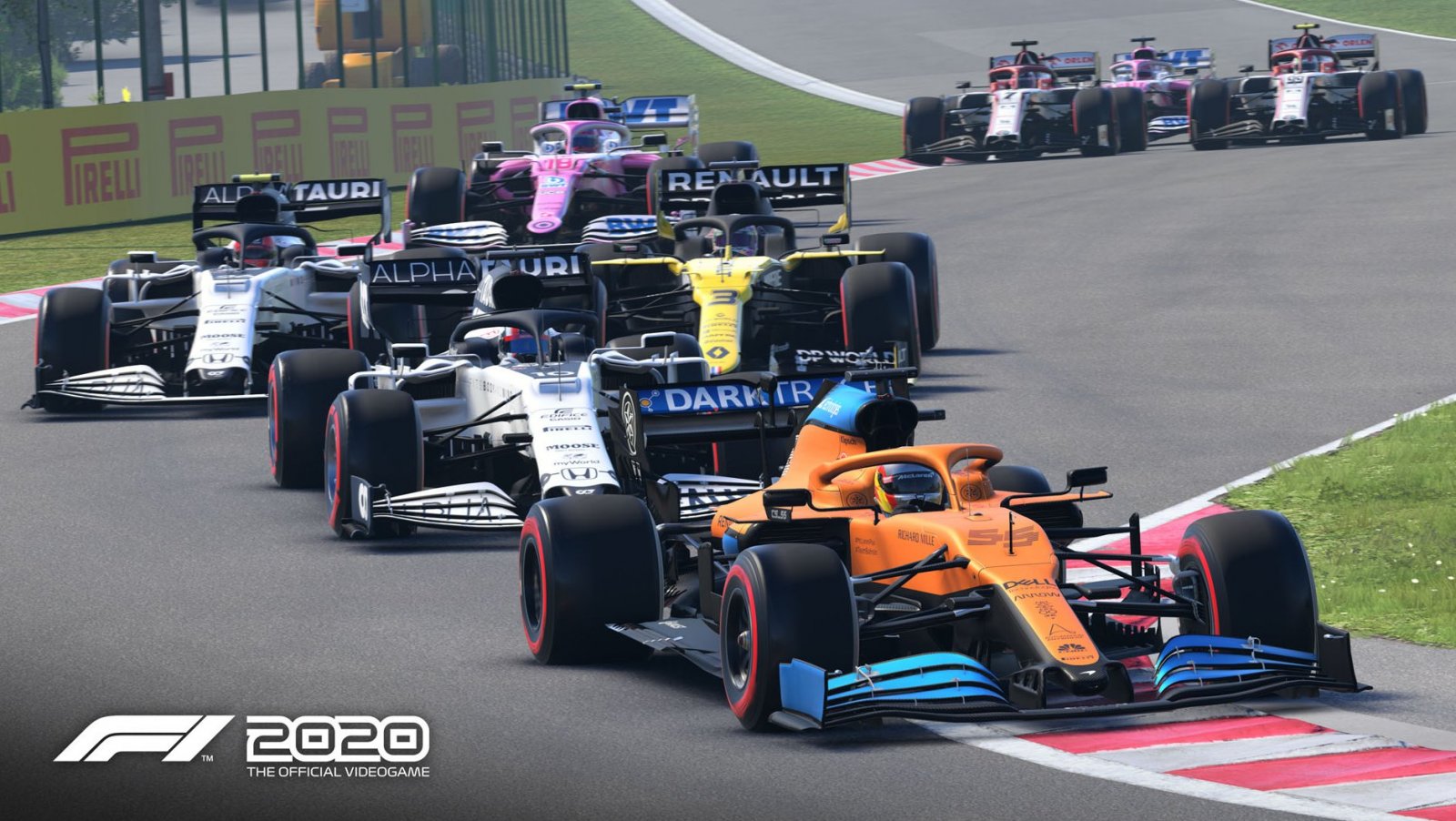 As a manager and driver, you’ll have goals that need to be met in order to earn bonuses, extra income, and increase the Acclaim of the team in the paddock.  And like a real F1 team, you must balance the budget of the team.  With me being a well-versed fan of F1, I knew there were certain corners to cut and certain ones not to.  When it came to choosing an engine manufacturer, I knew that Mercedes was going to be hard to beat.  But it would also eat into my allotted budget, and managing the team budget, I learned the hard way, is just as important as the results on-track.  Finally, you get to choose a teammate.  I won’t go into great detail about this, but some of the racers you can choose from will definitely put pressure on you to perform and put your team in a position to win.  You’ll also be able to design your team’s own livery for the car, memorable badge, and team colors, giving your team and drivers a unique look to stand out from the pack.

Other modes include, Grand Prix, where you can race a full 2020 season with current cars, classic, where you can drive some of the most beautiful and analog racing cars ever, or compete in the F2™ 2019 series. Now, what would F1® 2020 be without a presence in the F1® Esports?  With the start of the real Formula 1 season being on hiatus until this past weekend, many Formula 1 drivers took to the Esports series to play against gamers across the world.  F1® 2020 allows you to take place in online qualifying events, letting you race against the best players in the world, catch up on news, events, and watch as gamers race the top step of the F1® Esports podium. 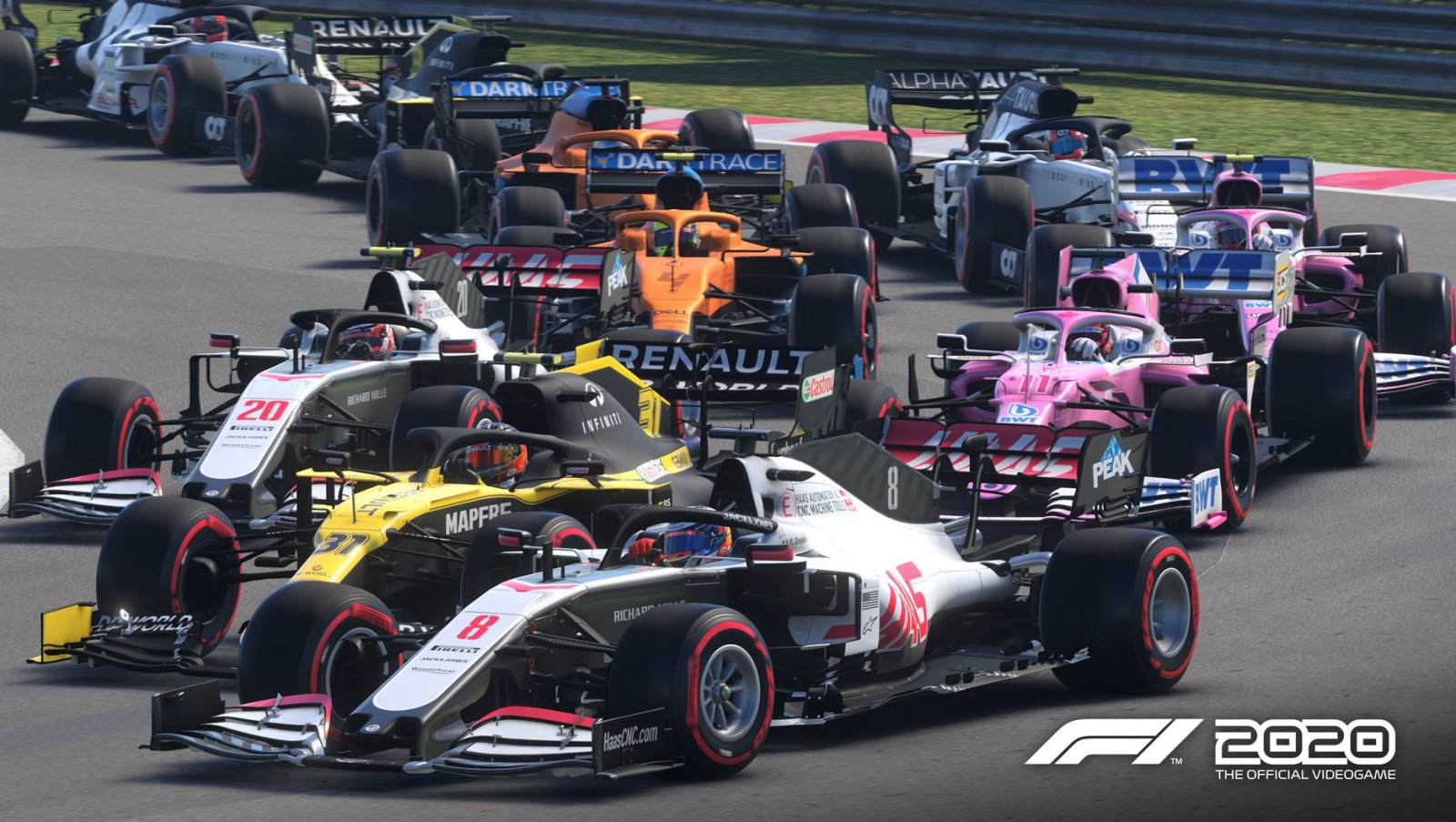 With minor tweaks here and there, I found little to nothing to complain about as I took sweeping corners in excess of 150 mph.  Load times are short, the cars feel sound, perform, and are as dynamic as they are complicated.  I did feel as though the game’s difficulty has been tamed a bit, possibly for allowing players to come to grips with the gameplay more.  There were a few questionable decisions on the team’s and car’s performance level that I reserve the right to speak on after the game launches, but this is as close as someone who cannot afford an F1 car can get to the real thing.

F1® 2020 is an amazing step in the right direction for Codemasters. By adding the My Team mode to the series, it gives this racing game a different personality; one sprinkled with adventure elements, and it works.

T.K. is a freelance writer, narrative designer, and author. Writing and developing narratives and giving voices to digital world and characters is his passion. As a game writer, QA game analyst, and editor for Gaming Trend, he enjoys being a part of the gaming industry.
Related Articles: F1 2020
Share
Tweet
Share
Submit