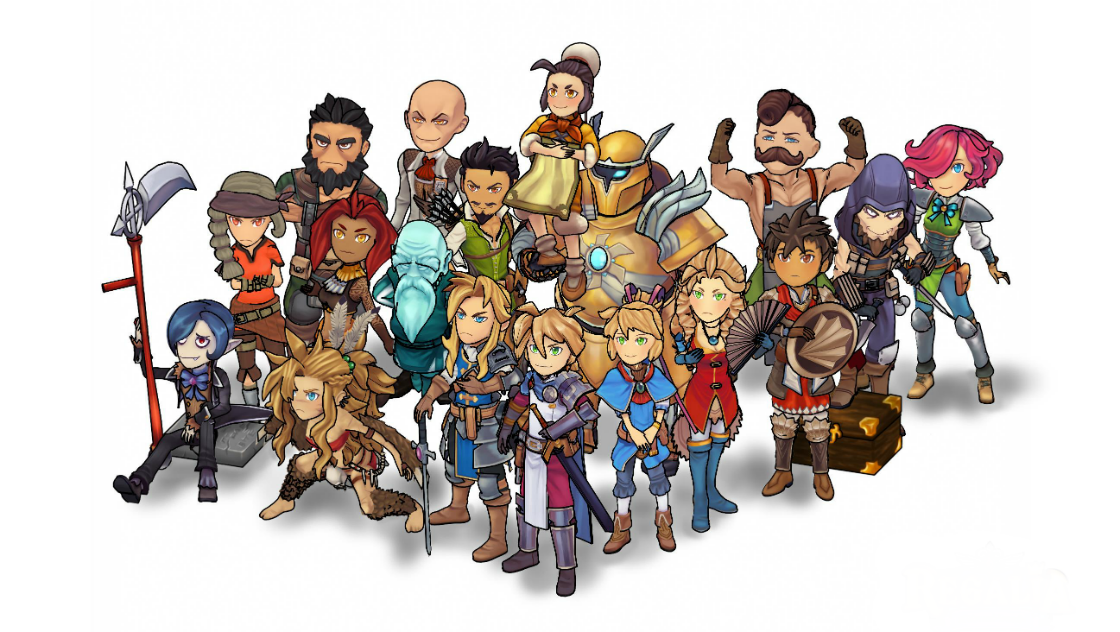 Have you ever mixed all the fountain sodas together into one magnificent ambrosial soda? The taste is a festive mix of sweet and incredibly sweet, but the flavor of each individual soda is overshadowed by the taste of the overall product. Regalia: Of Men and Monarchs is the suicide soda of video games, a very tasty, mixed up experience that takes several video game styles and elements and mashes them into a new product altogether. While it’s an ambitious effort, it unfortunately fizzles out in a weird mish-mash of flavors.

A tactical RPG first and foremost, Regalia also plays as a town builder and a choose-your-own-adventure visual novel, and fuses the three gaming styles together through a multi-stage dungeon system. Overall, I had a fun experience, but it is one that doesn’t really satisfy fully the expectations I have for any of those genres. This red mage jack-of-all-trades style of game also lacks excitement throughout and struggles with pacing due to frequent loading screens.

The story of Regalia is the highlight of the game. A half-competent roustabout named Kay, his two sisters, and his dedicated knight come upon an abandoned castle, having just learned that Kay and his family are of the Loren lineage of rulers. The castle is in shambles, but abandoning this claim is no option, as Kay learns soon that a massive Loren family debt has seen all of his belongings repossessed. His options are limited, and he must rebuild his family wealth to get out from under the financial rock that has landed on him.

The story itself is not complicated, but the dialogue is really well done, mature, and funny. The knight character is boisterous and over-the-top, the protagonist’s sister is a stuck up hyper-noble, and they, as well as the other characters you meet, are mostly caricatures, so they aren’t very dynamic, but fit a role that makes the overall story a hoot.

Regalia has several dungeons split into “nodes” that are one of three styles: battle, event, and camp. Battle nodes are tactical RPG style fights that are done within typically small, constrained arenas. You place your party members and battle in a series of rounds, with a turn based system based on character speed. Rather than allowing characters to use their special moves infinitely with a magic points pool, skills are timed, meaning you’ll have to wait a few rounds (with exception) to use it again.

These battles are painfully slow and feel an awful lot like using figurines during a Dungeons and Dragons game, only without all the charm and social fun that those table top experiences bring. The turns move like molasses, and I found that both I and the enemy have attacks miss on a frequent basis. The game also employs a “line of sight” mechanic that further complicates things. It is not a negative addition on its own, but it does add to the slow drag of these fights.

The event nodes are text based choose your own adventure mini-games, and these are much smoother and quicker to get through. You are faced with something you have found, be it a treasure or a creature, and you have to decide how you want to proceed. These can result in great prizes, side quests, or battles.

The camp node is the only of the dungeon nodes that can be revisited. You are able to rest characters here, which is the main effective way to regain HP and downed characters. This is also the only space you can save games outside of towns, which adds some old school challenge, but also re-introduces that old school drag to a game that really doesn’t need to be any slower than it is naturally.

While the gameplay is painfully slow, the overall goal of the game is a race against time that gives the game a sense of urgency throughout. Chapters demand that you clear areas around your castle, all the while completing tasks as they arise and building up the city. Each task, be it a dungeon node, travel, spending time with a companion, or building takes up a day.

If you don’t complete the needed tasks on time, it is curtains on your debt. The constant driving workload is in direct conflict with the game’s generally slow pacing. This is a strange dichotomy, but I love that the game doesn’t give you much in the way of excess time, making each individual decision important.

The design of the game is very cartoony, with soft and round aesthetic throughout the scenery and design of the characters. The monsters are very creatively designed, both in terms of function and look. Each dungeon provides a unique roster of monsters to battle as well. There are also a ton of music lyric “easter eggs” to be found throughout.

The worst part of the game, however, is a nearly constant flow of loading screens. They aren’t very long, but they are far too frequent, and they require input to pass to the next screen, making it very easy to “space out” for a moment.

Regalia: Of Men and Monarchs

Regalia: Of Men and Monarchs is a mish-mash of a game that combines tactical RPG battles with a visual novel and world building elements to create a fairly new experience. There is a lot of fun lines in the dialogue and the game provides an urgent, multifaceted challenge, but is poorly paced and plagued with loading screens that take away from the polish and joy that could have been.

Patrick Rost has been with Gaming Trend since 2013. At first focused on sports coverage, Patrick has gone on to cover a wide range of games and other products for the website. Outside of Gaming Trend, Patrick writes and records music, grinds perpetually in Elder Scrolls Online (PS4), and lives day to day with his two dogs, Bob and Stella.
Related Articles: Regalia: Of Men and Monarchs
Share
Tweet
Share
Submit