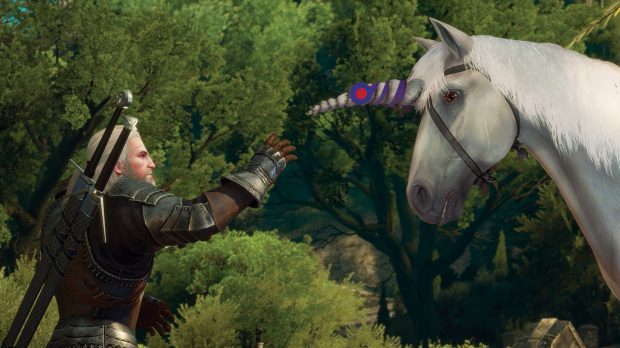 The story of The Witcher 3: Blood and Wine calls Geralt to a new country in the Continent (yes, that is really the name of the land in The Witcher) called Toussaint, where Geralt is tasked with hunting down an especially elusive and dangerous monster. However, as is usually the case in the witching business, things do not go according to plan, and the situation becomes more complicated than Geralt had anticipated. Without spoiling anything, the narrative is interesting, complex, and full of twists and turns that fan of the series would expect. The characters in Blood and Wine are especially impressive, as each individual has an incredibly rich history and an extensive set of motives that the player uncovers as the story unfolds.

Toussaint is an area unlike any other we’ve seen in The Witcher 3. Rather than immediately appearing battered by war, troubled by political strife, or plagued by monsters, Toussaint is bright, beautiful, and seemingly at perfect peace. Gallant knights with large, colorful feathers in their helmets ride about on steeds draped in chrome armor, and the populace are mostly dreamy, cheerful, and love-obsessed. It’s a very different tone from what we’ve seen before, and sometimes Geralt feels out-of-place in a land so grossly optimistic. However, Geralt knows that the true nature of things is rarely obvious at first glance, and the sprawling expanse of Toussaint is no exception. Behind Toussaint’s outward beauty lies a long history of political intrigue, and monsters hiding in plain sight. It’s a familiar theme in The Witcher series, presented in a compelling new way.

Geralt is a bit of a nomad, but in Blood and Wine he is given a place to call home in the form of Corvo Bianco. Corvo Bianco is a modest vineyard with quite possibly the coolest name of any protagonist headquarters. The vineyard also houses a majordomo with an equally amazing name, called Baranbas-Basil Foulty. “BB,” as Geralt lovingly refers to him, assists the player in making Corvo Bianco their own, and offers pricey renovation options that Geralt can add to his residence, which include a greenhouse, smithing equipment, a stable for Roach, and more. Corvo Bianco adds something that The Witcher series has needed for a long time, as not having a place to regroup at in a game as massive as The Witcher can be a huge pain. Unique alchemical ingredients can be grown, Geralt can sleep in a bed rather than meditating for hours, and NPCs the player meets will go there, even taking up residence there in some cases.

There is an abundance of side quests in Blood and Wine, and in typical Witcher 3 fashion, most of them are unique and substantial. The quests range from solving a mystery regarding strange sounds emitting from a cemetery, searching for a pair of stolen testicles, and figuring out how to overcome the bureaucracy of a local bank. Alternatively, players have plenty of new areas of interest to explore, which results in mini-challenges like destroying a horde of monsters, or searching for hidden treasure, although most of these encounters retread the experiences in vanilla Witcher 3.

When the player first boots up Blood and Wine, they’ll immediately notice an overhauled UI that looks much cleaner, and navigates much more smoothly than vanilla Witcher 3. In addition to the cosmetic improvements, though, is an all new “mutations system,” whereby Geralt can acquire a sizeable collection of new, powerful abilities to suit the player’s playstyle. As a melee-heavy witcher, I gained an ability that cause me to dismember each enemy I struck down, each of which increased my deadliness for the remainder of the encounter. New potions, equipment, and weapons have also been added, which give Geralt a staggering amount of endgame options.

Counteracting some of the new tools that Geralt has at his disposal are a slew of new enemies, which are tougher than anything we’ve seen him face before. Vampires turn invisible and move at near-imperceptible speeds, giant man-eating plants spit acid and explode in the witcher’s face, and hordes of human warriors and their battle hounds attack our hero from all sides. Although most of the new enemies breath new life into the game, some feel like a re-skinning of existing enemies, like scurvers, which are just the uglier cousins of drowners. All-in-all, there are plenty of new and dangerous foes awaiting Geralt in Toussaint, even if some feel a tad unoriginal.

The Witcher 3: Blood and Wine looks and sounds even better than the base game, with some notable caveats. The landmass of Toussaint is enormous and colorful, and I was impressed by how much of the map rendered on a console. However, some assets load a little too close to the player, and Geralt is prone to falling awkwardly into certain objects in his path. Similarly, the music and sound effects are top-notch, aside from the occasional choppiness that seems to result from the player entering and exiting the menu too rapidly, or by some other glitch. Despite the infrequent hiccup though, Blood and Wine’s presentation is a step-up from the already-gorgeous Witcher 3.

The Witcher 3: Blood and Wine

The Witcher 3: Blood and Wine is a nearly flawless sendoff for Geralt of Rivia, and the world of The Witcher.

You know that jerk online that relentlessly trash talks you after every kill? That guy was probably Travis "Tie Guy" Northup. Competitive, snarky, and constantly wearing a tie, Travis has been writing his opinions about electronic media since he was a teenager, and is pretty much the only person to hold his opinions in high regard.
Related Articles: The Witcher 3: Blood and Wine
Share
Tweet
Share
Submit