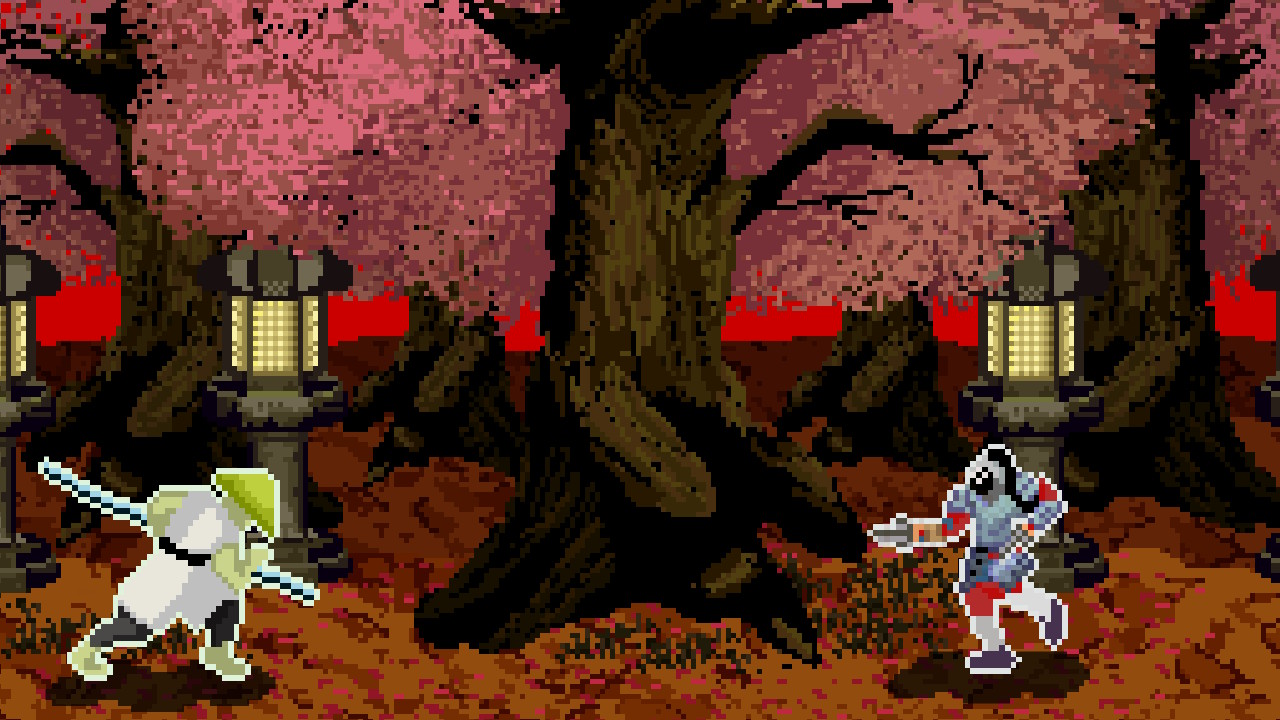 When it comes to battle, one move can be the difference between life and death. One Strike takes this to heart and makes it the core concept behind its gameplay.

One Strike takes place in feudal Japan and revolves around six fighters battling to survive. Every match starts with the mantra “strike or die.” Those three words fully embody your encounters in One Strike. The gameplay boils down to attack, block, and dash. There is no jumping, which is an interesting choice for a 2D fighter. This leaves the player with only head on attacks as an option, so you must wait for your opening to strike.

The basic combat might sound overly simple at first, but upon entering a match, you quickly realize that timing is everything. Going strictly on the offensive can leave you wide open, so you can’t always rush in. In fact, sometimes the best strategy is to wait for your opponent to make a move, and then counter accordingly. All six characters fight differently, which means you’ll want to learn how they operate as soon as you can. You have Kenji wielding a samurai sword, Tomoe with a short-sword, Bailong sporting a polearm, Soujirou wielding a longsword, Hangaku swinging her sickle and chain, and Hindo rushing in with sais.

There are four single player modes available: One Life, Arcade, Team Duel, and Tournament. You can choose easy, normal, and hard difficulty in all four modes; when you feel confident enough in your skills, I recommend raising the difficulty. One Life aims to represent real life: you only get one life to defeat all six opponents back to back. If you die, you must start over again. It’s a nice challenge, and it’s very rewarding to take down every warrior back to back. Arcade mode is similar to One Life mode, but both fighters get five lives instead of only one. It leaves more room for failure and mistakes, which eases the tension a bit.

Team Duel is my favorite mode of the four, mostly because it makes me think back to games like Tekken. Tekken had a mode that would let you choose a team of playable characters and you would fight until one team is wiped out. Team Duel follows that same idea, but the team is limited to three fighters. Each battle starts with a one on one fight, and once one combatant is killed, the next round starts with a different team member taking their fallen comrade’s place to avenge them. Once a whole team is eliminated, the player moves on to the next team and repeats this process until the final group is defeated.

Tournament is your standard tournament mode, nothing special about it. You fight to make your way to the finals and prove that you’re the most deadly warrior around. You can choose to watch the AI fights or just skip them entirely if you don’t feel like watching them. The AI fights can be entertaining to witness, so I’d recommend checking them out at least once. There’s also the versus mode, where you can take your friends on in deadly combat.

The pixelated art style is charming and gives the game a unique feel to it. In addition to a pleasing art style, One Strike features a few different locations. You may find yourself on a beach, in the woods, or even on a bridge near a village. Also, the music and sound effects as you’re engaged in combat increase your adrenaline and add to the tension. It’s amazing that such a simplistic game can involve such intense battles.

The game’s limited roster is kind of disappointing, but their diverse ways of attacking make up for that. There isn’t a lot of content to the game, but that doesn’t stop it from being enjoyable. One Strike feels more like a game you pick up to play in short bursts, possibly no more than an hour at a time. Some players may find themselves immersed for longer chunks of time, but I found that after an hour or so, that I needed to take a break. One Strike’s low price point works in its favor, so if you’re looking for a cheap yet enjoyably tense fighter, it’s worth picking up. I know I’ll be hopping back in every now and then to prove that I’m the deadliest warrior.

One Strike lets you take control of six different warriors as you fight to determine who is the deadliest. The simplistic yet tense gameplay will keep you on your toes. The small roster and limited variety to the modes are fun in bursts, but not for extended periods of time. That being said, One Strike is a fun fighter to pick up and play at a low cost.

Codi loves to play video games and watch movies. He will watch almost any kind of movie just to experience them. His ideas take inspiration from the shows and movies he watches, and games he plays. He also loves a good pun.
Related Articles: One Strike
Share
Tweet
Share
Submit