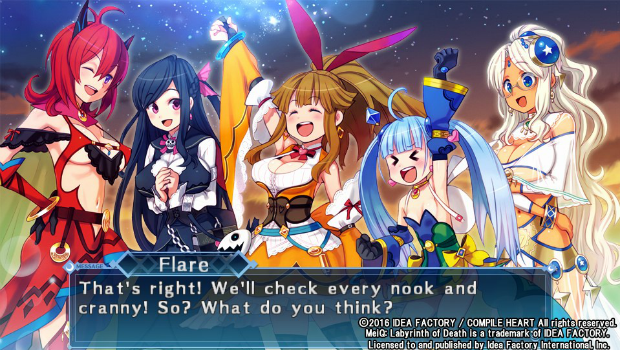 Like the stages of grief or the Hokey-Pokey, learning to cope with Compile Heart titles comes in five steps. You put your left hand in, see a boob there, and you deny ever playing the game. You pull your left hand out, realizing you’ve spent hours playing something equal parts bad and sexy, and that angers you. So, of course, you stick that left hand back in, start playing and tell yourself “It can only get better, let the story develop, there has to be more than boobs.”

By the time you’ve hit the Hokey Pokey and played a few of these JRPG softcore adventure titles, depression sets in. Then you pick up MeiQ: Labyrinth of Death. A game where the breasts are so large, that they demand being held up by the forearms of their female bearers. However, MeiQ is also a game that provides hours of fairly unique gameplay for the genre, and maze-like exploration mechanics that work magnificently. You can see the good through the bad, and contentment sets in.  You shake it all about, and reach acceptance.

Like most of MeiQ’s predecessors from Compile Heart’s catalogue, I can barely keep up with or care much about the story going on. There are five women who lead elemental guardians akin to robotic fighters into battle. In this world, the essence of life is stalled like a lawnmower, and these five brave ladies are tasked with finding the pull cord and restarting it before all is lost. The one who performs the best gets a great job of some kind.

The story is barely comprehensible in a sea of constantly cheesy dialogue. The overall importance of the story’s central conflict is also made negligible by the general aloofness of the characters. With little real comedy to be had, this represents another sloppy, uninspired story told. If you were coming here for a good tale, you won’t find it.

If you can look past that, you will find a lot of really interesting and unique gameplay choices that will surprise you as you play along. The entirety of the game takes place in first person view.  Estra, the protagonist, views her elemental guardian from afar in battle, and can attack and use items as well. This means you have two separate characters acting as one, but with different health and ability bars.

The game touts itself as a dungeon crawler, and definitely fits that bill. You move along square by square on a grid, but the game does a decent job of making it feel a little less rigid with its ambient design. MeiQ also employs maze style tactics to this, so you reveal the map as you travel, and can find many dead ends, some special routes, and alternative doors or dungeons that require special keys.

While I do appreciate how much they’ve put into making the exploration seem less boxed in, the truth is that there is no avoiding it. I love the challenge of the maze but once you’ve unlocked the space, getting around is a real slog. Luckily, MeiQ does provide a high number of navigation aids that making getting around easier, such as a sprint and auto-cornering which makes turns for you.

As mentioned above, there are some interesting features at work in the game’s battles, but for the most part this is a boring affair. The guardian is the primary source of fighting, but Estra and the others can use spells and items as well. Turn based in the most simple of manners, battles are purely performed by selecting an attack, and then watching the way it works out. No time meter, no order of operations, and no movement at all means that these are the most rudimentary RPG battles I’ve played in years.

The guardian you control is customizable, however. You can change the body, the arms, and there are two crystals as well which determine buffs and special abilities. The body and the arms change not only the look of the guardian, but also what moves the guardian can use. So, if you are in an area that is weak to fire attacks, you can quickly attach arms to the guardian that provide that type of attack, and swap out others as needed. As you defeat other guardian bosses, you are also able to use them for battle, and are customizable as well.

So, what you have is a game that has a little to like and a little to hate gameplay wise, that comes along with some baggage. Characters are over-the-top caricatures of human beings, for some a satirical statement, and for others objectification. I tend to lean more towards the latter. Beyond that, the graphics are unspectacular, particularly on the guardian models. Towns are nothing more than menus.  The music and ambiance is decent, if unspectacular. Truly, MeiQ: Labyrinth of Death is just that: good enough, but underwhelming.

MeiQ: Labyrinth of Death is an acceptable title dotting the grievous past of Compile Heart. A dungeon crawler with maze style gameplay, and a fairly unique and customizable battle system, MeiQ does a good job of providing some fun and interesting moments. Falling short overall in the battles, and leaving very much to desire with story, characters, dialogue, and respect for human dignity, MeiQ is a title only for the most dedicated RPG player.

Patrick Rost has been with Gaming Trend since 2013. At first focused on sports coverage, Patrick has gone on to cover a wide range of games and other products for the website. Outside of Gaming Trend, Patrick writes and records music, grinds perpetually in Elder Scrolls Online (PS4), and lives day to day with his two dogs, Bob and Stella.
Related Articles: MeiQ: Labyrinth of Death
Share
Tweet
Share
Submit