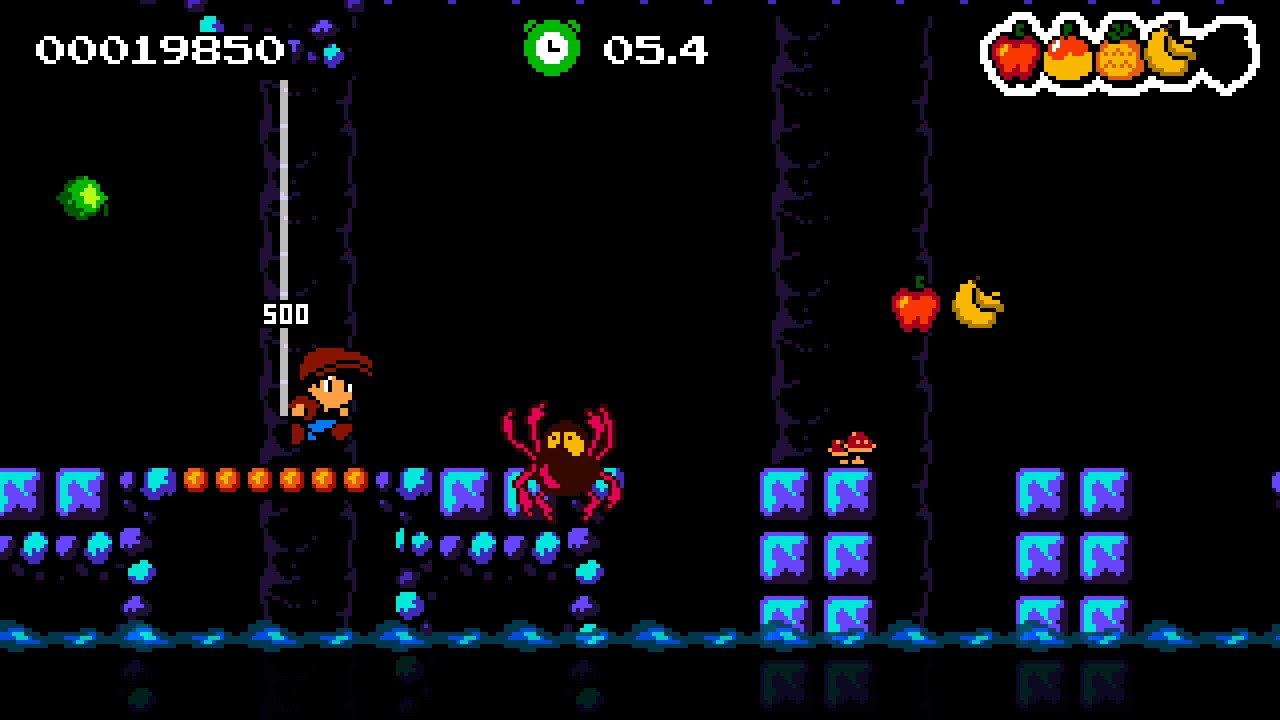 A while back, Four Horses released its platformer Kid Tripp on the Nintendo Switch and I bought it since I missed the 3DS release. While there was a lot to like about the game, I ultimately was turned off by the unwieldy autorun controls mixed with frustrating pixel perfect jumps, as well as an archaic lives system that served no purpose except to infuriate. It seems that the developer has learned from the experience, however, and released Miles & Kilo, a sequel that adds a multitude of improvements that makes it a wonderfully exciting platformer that I wholeheartedly recommend.

Miles & Kilo stars the titular boy and dog duo as their plane crashes on a mysterious island, where monsters take their plane parts. The two have to travel five worlds in order to get their precious cargo back and leave the place, but in true platforming fashion, it’s easier said than done. Interspersed between worlds are pixelated cutscenes that give an SNES/Genesis feel to the game; they’re not super deep, but give enough backstory that the adventure makes sense.

Everything in the worlds are out to destroy the two, from spikes to bees to monkeys, and you’ll have to dodge, jump, and shoot fruit pellets in order to complete levels. You mainly control Miles as he runs to the end of a level, making sure not to collide into enemies. You can jump on some enemies, while your main method of attack is fruit pellets, which you can shoot up to five at a time and can replenish with pickups. (Having all five available shots is required for a higher score, which we’ll get to later). In some levels, you get to interact with Kilo, who drags Miles as he moves automatically. Here, you can utilize a roll move as well as a homing attack ala Sonic. I enjoyed these levels more than the Miles ones, but it’s a shame that we don’t get too many of these; peppering a few more here and there would be a nice option.

Boss stages punctuate the final levels of the world, which are interesting endless runner-type levels where you have to dodge enemy fire while hitting back at the right time. While they’re still technically less than a minute long, they’re nice ways to add a little variety to the main gameplay loop. I especially enjoyed the boss stages where you needed to control Kilo, as it was an innovative control scheme that relied on homing attacks to save the day.

Compared to its predecessor, Miles & Kilo controls perfectly. Autorun in Miles’ stages are disabled by default (though it can be toggled on for those that want an experience similar to Kid Tripp), and most levels work better when running at all times, there are some moments where pausing for a second is crucial. The platforming is tough but tight, and almost every time I died, it was more because of my poor judgement rather than it being the game’s fault. There were a few instances where my hand cramped up by trying to exploit height mechanics (jumping on an enemy and quickly pressing the jump button will make you jump higher), so that might be an issue. While stages last less than a minute long, you will die multiple times; thankfully, restarting the level is easy and effortless, without loading of any kind. It’s this kind of flow that fits the challenging difficulty perfectly. It’s a nice touch to immediately restart, and I really think all pixel-perfect platformers need to do this more often.

I also liked how Miles & Kilo operates on a score-based achievement system and does away with lives from the last game. Having a lives system in Kid Tripp broke the flow of the last game, and getting plopped back to the menu every time I lost all my lives killed a lot of enjoyment when really getting into the game. Here, you’ll be judged based on time taken to complete the stage as well as how much fruit you have left in hand. While you can pick up fruit from levels, there are some levels that restrict how much you can grab, so you’ll have to make some split-second decisions in order to either risk losing an attempt or losing a higher grade, from D to S. in addition to letter grades, there’s an in-game achievement system that is more cosmetic than anything else, but is still a fun diversion that perfectionists can complete to eke out a little more replay value. A playthrough won’t last more than a couple hours, but the replay value (and an unlockable time attack mode) will more than double that amount. It’s also one of those games that I can imagine speedrunners can try and complete in the shortest time possible.

As for the rest of presentation, Miles & Kilo has a solid pixelated style that works well with this type of game. Think of something from Mighty Gunvolt Burst or Mega Man 9, which is a faux 8-bit style that still feels modern and fresh. The music is mostly frantic and fast-paced (aside from some slower numbers), and they contribute to the quickly moving mood of the game. The game moves smoothly, and there were no slowdowns in my playthrough, although there were a couple of times in the final level, where after dying, lava would fill my screen but would just hang there, forcing me to do a soft reset in order to play again. This only happened a couple of times, and it wasn’t a dealbreaker.

Miles & Kilo is a massively improved sequel that mixes great platforming mechanics and tough but fair difficulty in the package. It’s a cheap title that you should definitely pick up if you have an hankering for fun, lighthearted platformers. Grab your canine friend and get ready for a howling good time!

Elisha Deogracias is an aspiring accountant by day, freelance writer by night. Before writing for Gaming Trend, he had a small gig on the now defunct Examiner. When not being a third wheel with his best friends on dates or yearning for some closure on Pushing Daisies, he's busy catching up on shonen manga and wacky rhythm games. Mains R.O.B. in Smash. Still doesn't know if he's a kid or a squid.
Related Articles: Indies, Miles & Kilo
Share
Tweet
Share
Submit