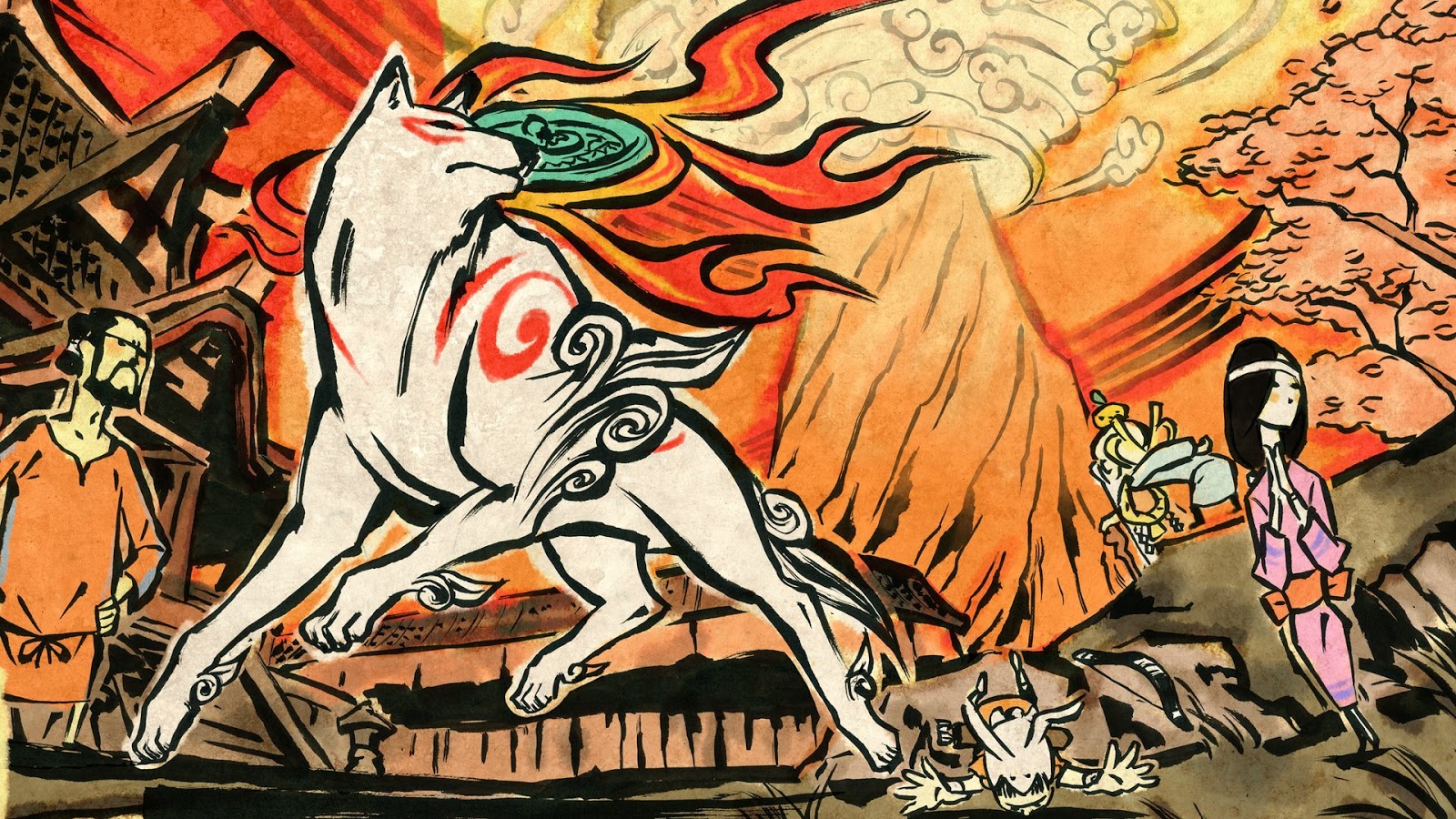 Imagine you’re walking through an art gallery. It’s a long white hallway with a door at the far end. Adorning walls on either side of you are beautiful Japanese paintings. Thick black brush strokes filled with brilliant watercolors depict sweeping Japanese landscapes, bright pink cherry blossoms, traditional Japanese architecture, and various forms of wildlife. It’s all breathtaking at first, but as you get closer to the end of the hallway, you realize that each painting is very similar to the one before. The style doesn’t change. Each brush stroke is of the same thickness, and the vibrant color palette begins to wash away as each painting bleeds into the last. Door after door keeps you locked in what feels like an eternal loop of what has now become a swirling, blotchy mess of color.

Okami HD is O.K. for the first 20 hours (hell, O.K. is written in the title), but it’s when the game opens new doors to the same stuff as before, and does so over and over again, it loses any allure or charm it had to begin with. This remaster pays homage to a classic game from over a decade ago, and if you enjoyed it then, you’ll enjoy it now. It’s pure in the sense that it keeps true to the original, but it’s an artform that has faded over the years. Even with its HD upgrades, it feels dated.

The story follows the fierce wolf goddess Amaterasu and her spunky sprite Issun. Amaterasu, or Ammy, as Issun so affectionately calls her, does not speak. So Issun provides her half of the conversation when meeting various characters throughout Nippon. He’s obnoxious, sexist, and very chatty, making a vast portion of the story unbearable to read. In fact, the entire script is a bore to slog through. You’ll spend hours and hours clicking through text bubbles filled with choppy and repetitive dialogue. The same tasteless jokes about female chests and one-sided name calling from Issun grow old very quickly.

The world of Okami begins 100 years ago when the eight-headed demon dragon Orochi was defeated and banished by the white wolf Shirunai and legendary swordsman Nagi. Now, it’s been unleashed by the fabled hero’s bumbling descendant Susanoo, and is blanketing the land in darkness once again. Your job is to restore the ancient Guardian Saplings to their former glory, dispel the cursed mist clouding the country, and defeat Orochi by harnessing the otherworldly techniques from the 13 Brush Gods.

The story works all the way up to your encounter with the big baddie himself, but grows tiresome once you have to repeat the same process three or four more times. Every time you think it’s over a new demon erupts from the corpse of the last and covers the land in shadow. There’s literally a part where it’s revealed that being defeated was all a part of Orochi’s plan, so that an even greater evil could arise. It’s a lazy plot device intended to extend gameplay hours. I wanted the game to end on several occasions and it just dragged on until I was discontentedly pressing buttons to get through it.

The defining characteristic of Okami is using the brush techniques to pause and paint the screen in various ways to solve puzzles, open new pathways, and combat enemies. Using the right analog stick to draw circles, lines, and curves is natural and helps to break up the button mash-style combat. The first few times you paint a bridge, bloom a tree, or draw a water lily is unique and interesting. Drawing 15 lilies in a row to tediously jump your way across a large body of water, on the other hand, is tiring and dull. The novelty of the brush mechanic thins out during these platforming sequences.

Learning certain new brush techniques often acts as a key to access new areas that were previously unreachable. There is a Metroidvania quality to the game that will resonate with fans of the old school exploration style. There is a bevy of landscapes to explore from Imperial cities to snowy forests to coastline villages and even a few more unique and unexpected places. It’s unfortunate that the painterly landscapes are washed away by the repetitive action and monotonous narrative.

There are dozens and dozens of characters to interact with, but they feel more like clutter. Anthropomorphic birds living in a hidden sanctuary, a dragon-controlling race that lives underwater, and celestial beings that come from space seem like they’re just thrown in to populate the narrative without actually contributing to building an interesting world. It’s a convoluted mess that weirdly juxtaposes with the simple and repetitive story.

In keeping with the monotony, combat is also repetitive. The best strategy is to jam on the attack button and dodge every so often. Only during boss fights and a select few other encounters are you required to use your brush techniques in interesting ways. It’s unfortunate that you will even have to fight the same bosses multiple times. Feeding a dragon sake by drawing a line from the pool of alcohol to its mouth or using the wind to blow out an enemies flame attacks are fun, but sparsely implemented. There are ways to mix up the traditional combat like training in the dojo to learn new combos and moves, gaining new weapons from vanquished bosses, and finding various forms of equipment that grant you temporary boosts in defense or attack. But most of these elements weren’t necessary until the last quarter of the game. I could get by with just mashing attacks.

Throughout the world you can also collect treasures to sell, catch fish, feed animals, bloom trees and more, most of which grant you orbs that can be spent on upgrading Ammy’s health, ink reserves, and purse size. As you progress, you’ll need to increase each aspect of your character to survive.

There’s a lot of content in Okami HD. Unfortunately, interacting with the wealth of characters, locations, and collectibles becomes more of a chore when the story and action is so repetitive. Despite the different coat of paint, each new encounter felt like the last. The colors began to fade around the halfway point, and the game just kept painting without adding anything new to the page.

On December 5, 1986, Josh was born into this world pink-faced and squalling. His only thoughts were, "WHAT IS GOING ON? WHO ARE ALL OF THESE PEOPLE? AND WHY THE HELL AM I NAKED?" 19 years later he bought an Xbox 360 and now plays and writes about video games. Life is funny that way.
Related Articles: Okami HD
Share
Tweet
Share
Submit