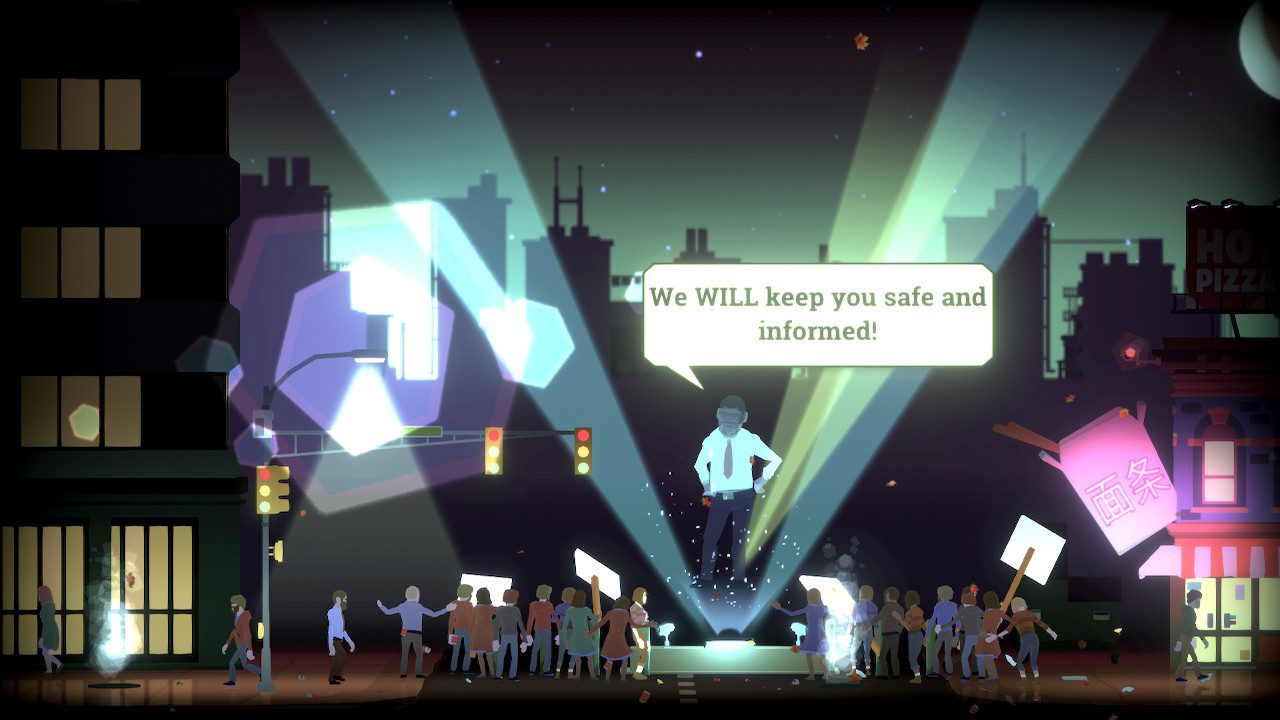 Two pieces of paper stapled together lay on your desk this morning. The first is a story about healthcare reform: how healthcare is a basic human right and the benefits of the newly proposed system. The second is an exposé on the prime minister, his corruption, and why your home country of Novistan needs a new leader. Only one can fit in tonight’s news broadcast, and you, as the headliner, must decide which.

In Headliner: NoviNews, you play as the titular headliner: a man, woman, or non-binary pal of your choosing, and your job at NoviNews is to decide what stories will appear in tonight’s news broadcast. As the country’s most prolific news outlet, any pieces you decide to highlight will greatly affect the opinions of the people of Novistan: a dystopian nation where all citizens are genetically modified before birth, government surveillance is everywhere, and no one can seem to get treatment for the mysterious plague affecting many people. There’s a lot of weight on your shoulders, but that’s why you get paid the big bucks, right? They say you can’t change the world overnight, but that’s not exactly true here: every day after you leave the office you can see the fruits of your labor. People on the street will talk about what’s going on in Novistan, how it affects their lives, and their opinions on it. Random passersby will give you a general gist of how the nation feels, but when you speak to your coworker, your aspiring comedian brother, a local convenience store owner, or a police woman on the trail of a murderer you’ll get a better idea of how your decisions impact others. 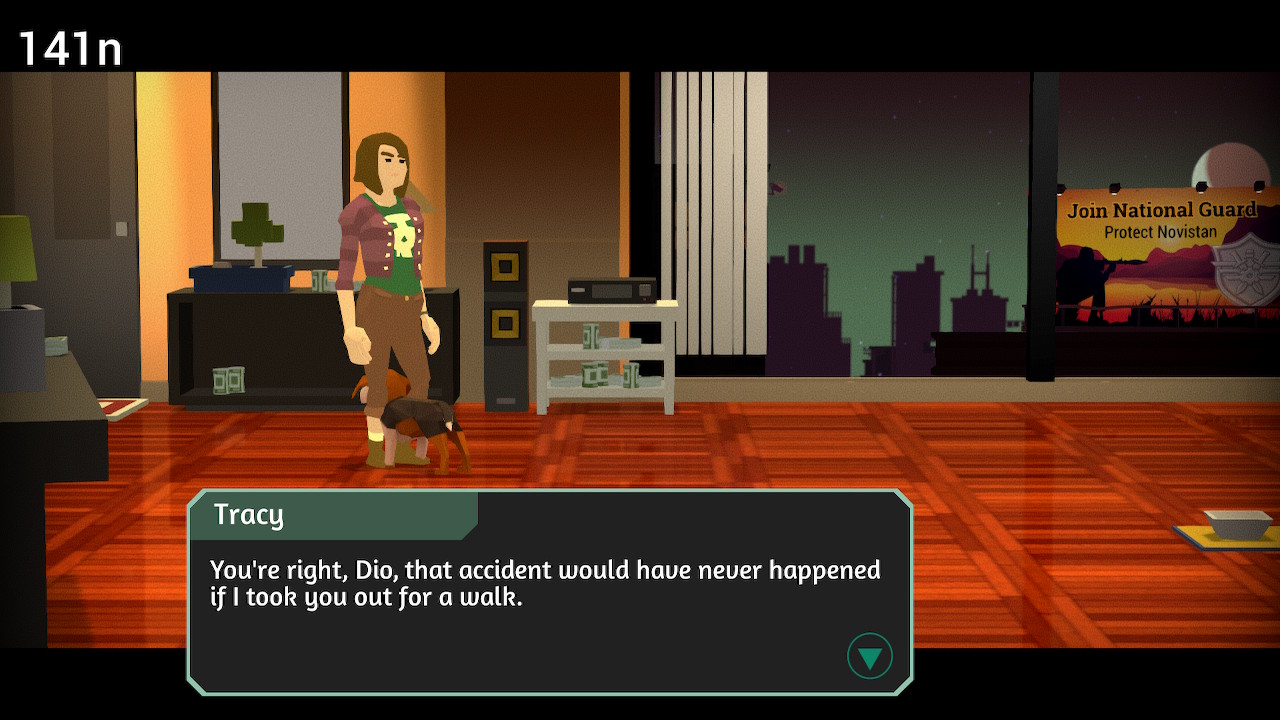 How do you make those decisions you may ask? Well, it’s a bit underwhelming. You look at all the proposed stories on your desk, stamp which ones you approve and which you disapprove, and then you go home. This simplicity removes some of the gravitas that I think you’re supposed to feel in this situation, and while there are some difficult decisions you have to make when restrictions are placed on you, like when you can only approve 2 to 3 stories or you have to choose between two stories that would take up the same slot, it’s hard to take your job too seriously when all you’re doing is stamping things.

When playing Headliner, it’s hard not to notice certain parallels between the current… situation of our real world and the nation of Novistan. Fascist leader who somehow hasn’t been ousted yet? Check. Xenophobia on the rise? Check. Big debates about healthcare? Check. The list goes on and on. These similarities do help to bring some weight back to your decisions, and the game becomes an interesting simulation of what the world could be like if certain opinions win out over others. In my first playthrough, ace headliner Tracy Donahue focused on approving healthcare for all, improving foreign relations, and exposing the truth about the strange plague. She also had a weird vendetta against the new alcoholic(?) drink BetterBuzz. In the end, things turned out pretty well: her brother was able to get medication for his anxiety, the corrupt government was exposed and deposed, and she even got together with the company’s foreign correspondent, Evie. While Tracy did lose her job, she did a lot of good in the process. 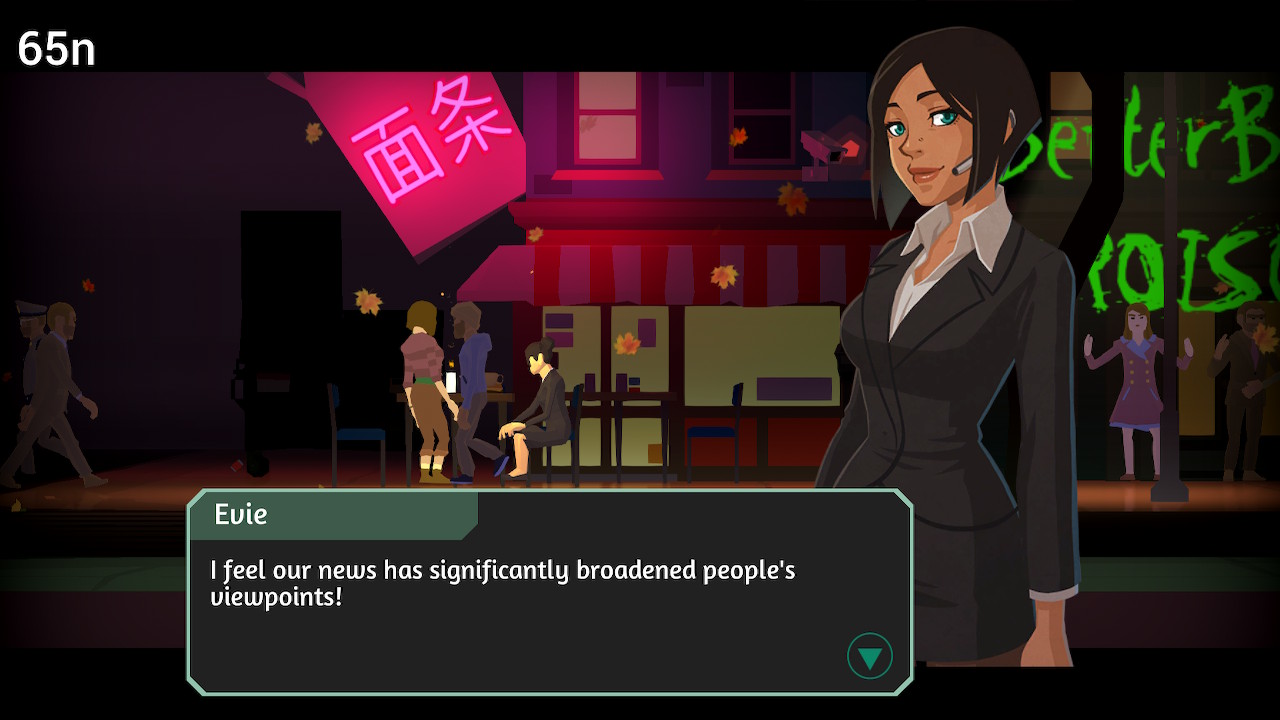 Unfortunately, after beating your first playthrough is when the game starts to falter. You unlock a new character to interact with: a police officer trying to solve a murder while dealing with past traumas. Everyone else you got to know in your initial run also start acting a bit differently, your boss mentions that you are the second headliner they’ve gone through in as many weeks and you find mysterious notes on your desk saying you’re ruining another timeline. The game contradicts itself constantly now, after the ending there’s a message saying the game was meant to be played multiple times, but you’ll keep encountering things and people telling you to stop playing the game. You also may think that as you keep playing you’ll unlock a few more characters, but you’d be wrong. Headliner tries to be both an interesting national simulation, and a meta-narrative that really doesn’t go anywhere. It easily succeeds in the former, but the latter can really drag down repeat playthroughs.

The visuals and sound continue this trend. The 2D backgrounds look great and character portraits are expressive and endearing, but the 3D models used when exploring the city or in your apartment go for a low-poly style that ends up looking very generic. Some characters’ 3D models look nothing like their 2D counterparts, and everyone is poorly animated and stiff, for example, petting your dog makes your character just shove two hands in the general direction of the dog. The game also has some rocking music that sounds a lot like compositions from the Sega Genesis, but the sound effects are clearly stock and suffer from compression and clipping. The controls feel very slippery when walking around, and for some reason dialogue choices will reset to the top choice after a few seconds which can make you say something you didn’t intend. There’s a lot of little things that hold the game back.

Headliner: NoviNews has a great concept, interesting characters that you’ll care about, and potential of an enormous amount of replayability. But each part of the game is hindered by something else that can make getting through it a bit tedious or annoying. However, despite these problems, it's at least worth one or two playthroughs.

David is the kind of person to wear his heart on his sleeve. He can find positives in anything, like this is a person who loved Star Fox Zero to death. You’ll see him playing all kinds of games: AAAs, Indies, game jam games, games of all genres, and writing about them! Here. On this website. When not writing or playing games, you can find David making music, games, or enjoying a good book. David’s favorite games include NieR: Automata, Mother 3, and Gravity Rush.
Related Articles: Headliner: NoviNews, Indies
Share
Tweet
Share
Submit