A Hat in Time, on PC at least, is one of my favorite games. It’s an incredibly fun platformer that’s charming, funny, and cute-as-heck (their words, not mine). I’ve 100%-ed the game on PC multiple times, played a bunch of mods as well as make my own, and I even contributed to the kickstarter waaay back in 2014, so one could say I’m pretty invested in this game. A Hat in Time along with its two DLC packs, Seal the Deal and Nyakuza Metro, was recently ported to the Nintendo Switch. We already have a review of the base game, which you can check out here, so this review will primarily be covering the two DLC and the quality of the port.

In A Hat in Time, you play as Hat Kid: a little girl who has recently crashed on an unknown planet. Hat Kid needs to find the Time Pieces (Think the Stars from Mario 64) scattered about the planet to refuel her spaceship and get home. Along the way she’ll meet a colorful cast of characters like the mischievous Moustache Girl and ruler of the haunted forest, Snatcher. The game is filled with tons of different styles of platforming, from more linear sections to a full on open world, and you’ll use your various hats to navigate each level. It’s incredibly inventive and full of variety; in the video above you can watch me solve a train murder mystery. Seal the Deal offers a new chapter that takes place on a cruise ship with an incompetent yet adorable seal crew, while Nyakuza Metro takes place in a complex metro system run by criminal cats. 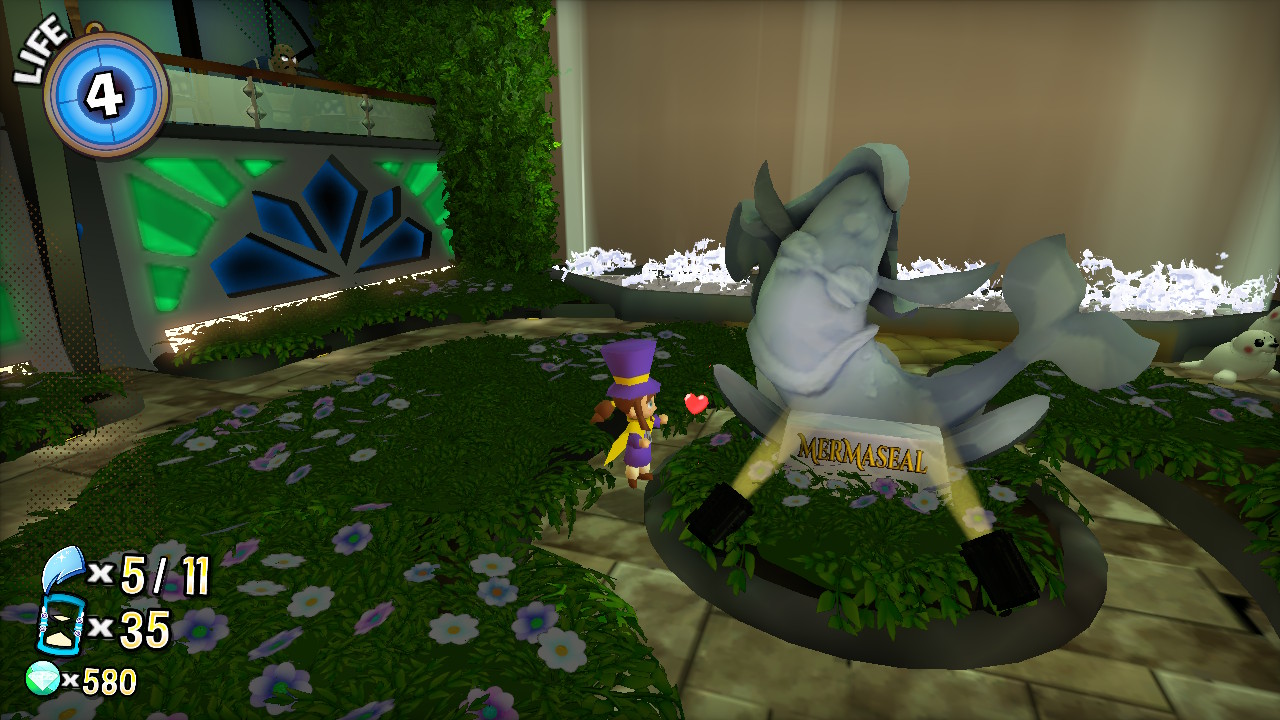 On Switch, textures are super scaled down resulting in a pixelated look, which is a shame because the game looks great on PC. This is more tolerable in portable mode, but it’s a bit harder to see everything on the smaller screen, especially in some of the darker areas. The camera doesn’t help matters either, it’s locked into what the PC version calls “Top Down” mode where pressing up or down on the right stick will zoom the camera in or out. It’s confusing as to why the other camera mode isn’t an option here, I’ve had absolutely no problems with it in the past. In addition to the visual and camera control problems, the game will occasionally freeze up for a second or two when moving too quickly or when it needs to load a new chunk of a level. It’s not a problem most of the time, but it can happen in the middle of a jump which, while it never messed me up, was fairly frustrating.

First on the DLC docket is Seal the Deal. I was surprised to see that this new area performed the worst out of anywhere in the game as I expected the more open chapters would fare worse. While the cruise ship doesn’t stutter or experience frame drops like some other locations, it does have the most glitches. There are a lot of moving parts on the ship that would frequently break, for example an elevator connecting the daycare center to the deck broke multiple times in very weird ways. When entering from the daycare, the elevator would just take me back to the same place despite appearing to move, and when I tried to enter from the deck it was stuck in the middle. In addition to the new chapter, you get a ton of challenges revisiting previous levels with special conditions. For example, you may be tasked with completing a level again but with a severe time limit and new obstacles. These appear to have been made much easier from when they launched on PC, still difficult but not as impossible as they once were. Having the most difficult, and sometimes frustrating content, this chapter and the Death Wish challenges take 35 time pieces to unlock. While I think the new chapter is one of the weaker parts of the game, the new challenges are worth the price as you get a ton more content including new costumes and badges. 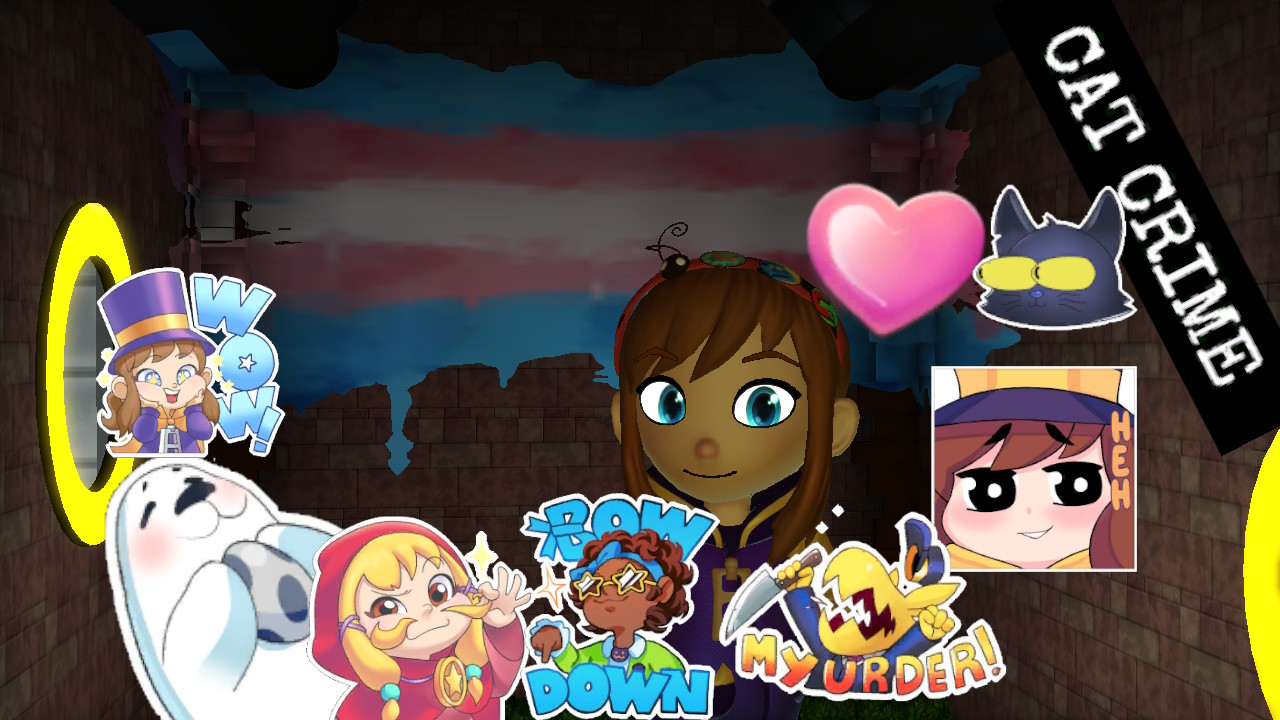 Next, we have the Nyakuza Metro, a massive train complex with kitties, criminals, and shopping galore. Whether you like it or not, you’ll be forced into Cat Crimes if you want to collect the numerous Time Pieces in each section of the metro. This DLC contains some of the most fun and pure platforming in the game; it’s also very freeform: you can explore any section of the metro in any order you wish in any direction. This feat of design is incredibly impressive, it’s possible to do some fancy jumping and skip large swaths of the level, which is especially helpful since you’ll be revisiting areas multiple times.This DLC also introduced stickers which you can use in photo mode or by pressing the right stick. On the PC version these were helpful for communicating with other players in Online Party mode which is absent in the Switch version. It’s disappointing, but understandable that this feature wasn’t included since adding in 50 players at once would probably crash the game on this little console.

A Hat in Time

Taking into account the stuttering, low resolution textures, and downgraded 3D models, this is still an incredible game. When I started playing, the game was a bit harder to look at, but as I continued and got back into the flow of its platforming I stopped caring about the visuals. While the glitches are still bothersome, it’s a testament to just how good A Hat in Time is that I still adored the game in this compromised state.

David is the kind of person to wear his heart on his sleeve. He can find positives in anything, like this is a person who loved Star Fox Zero to death. You’ll see him playing all kinds of games: AAAs, Indies, game jam games, games of all genres, and writing about them! Here. On this website. When not writing or playing games, you can find David making music, games, or enjoying a good book. David’s favorite games include NieR: Automata, Mother 3, and Gravity Rush.
Related Articles: A Hat in Time
Share
Tweet
Share
Submit