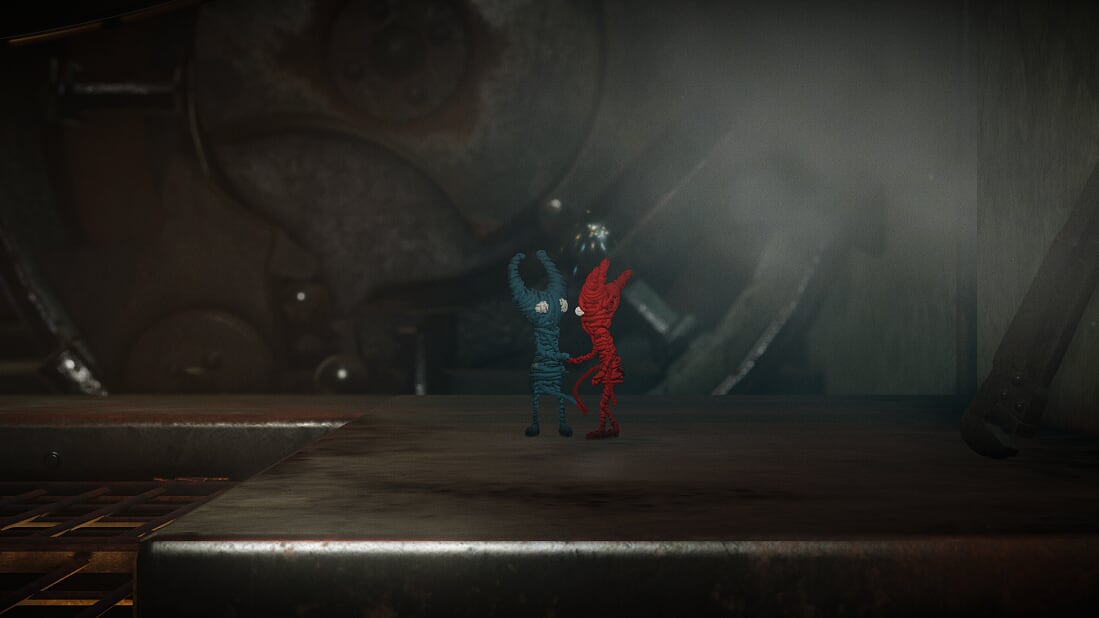 When the first Unravel was announced, it stood out from its competition immediately. More importantly, the character of Yarny captured hearts with its charm and warmth. That warmth permeated the whole game as you moved through a life of memories as a yarn doll constantly…unraveling. In the sequel, the developers at Coldwood Interactive have managed to maintain much of the rustic and austere themes while also critically improving all of the mechanics at the core of their puzzle platformer series.

In the original, as you moved from left to right, your character regularly needed to replenish its stock of yarn or it would run out of slack that allowed you to continue, so the game’s puzzles revolved around managing your excess yarn so that you would be able to reach the end of the level. That concept was fine, but you ended up trusting that there would always be yarn within reach, and if you ran out it meant you needed to backtrack a little and find the spindle you missed. Unravel Two abandons that concept completely. This time out there are two Yarnys to prioritize a cooperative experience. Now instead of managing a long single line of yarn, you have string connecting the two characters. The game puts more of a focus on getting that tangled and wrapped around obstacles.

The priority on co-op means that even when you are playing single-player you control both Yarnys, but you are forced to switch back and forth between them. Thankfully, you are also able to absorb your buddy into you and run around as one unit until you need to split to solve puzzles. It is simple enough and playing single-player was never frustrating, but I certainly had the best time with Unravel Two when I was playing with a friend.

The co-op mechanics are well thought out and smooth. If you are playing by yourself and maybe need some help, then someone need only grab a controller and take over player 2 to help out. If you are already playing co-op and get to a platforming challenge that proves too difficult for two players to manage independently, you can still absorb into the other player and let just one player carry the duo through a tricky situation.

Co-op is certainly the main new addition for Unravel Two, but Coldwood also did a lot of work to the base platforming mechanics to make everything faster and more fun. You still have the ability to connect two grappling points in the world to create bridges and trampolines, and you can still lasso those points and swing around the level, but this time they’ve added a wall jump and the second player can also function as an anchor point on ledges to allow you to swing from any raised platform. It means that this game can build more interesting and challenging levels around the sheer act of swinging and jumping than the the original Unravel was able to. They also added a slew of challenge levels that unlock once you finish regular versions of levels that offer a deeper dive into the game mechanics. These additional goals are an excellent reason to come back and test yourself, but they are not necessary to enjoy the game.

The yarn between the two characters stays and interacts with the world, so there were a lot of instances where I was required to figure out how to wrap the two characters around the objects in a level so that after reaching my objective, the second character could climb the yarn and reach me. It was an interesting and fresh mechanic that really made Unravel Two feel like something new and interesting rather than attempting to tug on the same heartstrings as the first game.

That story that served as the backdrop for the first game doesn’t make an explicit return, but it manages to say something similar, yet completely new and relevant. In the background of the levels there is a loose narrative of two young children growing up, getting into trouble, and becoming closer. You see them as wispy figures acting out small vignettes in their lives together. They might be exploring the forest to go spend the day at the lake together, or they may be fleeing from someone who means to reprimand them for some mischief. For how little the developers engage in an explicit narrative it is quite effective in conveying a tone and message. A message that is also completely relevant given the added cooperative nature of the game.

What helps further drive home these emotional scenes is the fact that the game world is beautifully rendered in such a realistic way that it lends a depth to the anthropomorphized yarn dolls. Despite being an overly cute, somewhat cartoonish figure, the fact that you occupy what looks like completely real environments makes it feel less like a children’s story and more a story with just enough whimsy to endear the characters to the player.

Unravel Two is surprising for a lot of reasons: after the first game was quirky and interesting, but maybe not the most fun as a platformer, I’m surprised that the sequel so successfully is able to blend the heartwarming characters with some genuinely fun and thoughtful gameplay. And it does all that while seamlessly incorporating a cooperative experience into the gameplay and the story. My biggest complaint with the game is that if you don’t have another person to play through the game with, you simply won’t be seeing the game at its best, but if you do, it is a fun and clever game with something to say.

For a game where you play as an adorable yarn doll, it does an admirable job setting up a touching narrative intertwined with clever and unique puzzle platforming. And if you have a friend to play with, then Unravel Two is a treat in the visuals and the gameplay.

Nathan lives in Colorado catching Pokemon on the Go and at home. He previously spent three months interning for Game Informer before coming back to Gaming Trend to spread the good word on video games. His real passion, though, is collecting different versions of the 3DS and other weird Nintendo garbage. It's a never-ending quest for less space in his house.
Related Articles: Unravel Two
Share
Tweet
Share
Submit