Being in the entertainment business can be hectic. One minute you’re signing autographs for fans after a concert, the next you’re recording lines for an upcoming anime series, and after that you’re fighting demons in another dimension. Wait, what?! That’s the idea behind Tokyo Mirage Sessions #FE (pronounced Sharp FE). The long awaited crossover between the worlds of Shin Megami Tensei and Fire Emblem was nothing like anyone thought it would be, and being on the Wii U didn’t help its case much. With this new Encore edition, the game gets a new life and new content on Nintendo Switch, but is it worth signing on? Or should you take your talent elsewhere?

#FE begins with main character Itsuki and actual protagonist Tsubasa attending a contest to become an idol (basically a Japanese version of celebrities, though it’s more complex than that), the former cheering on the latter as she competes. In the middle of the competition, the MC turns into a monster, sucks all the talent out of the contestants, then takes them through a mysterious portal. Itsuki dives in to rescue his friend and after a series of events the two bond with their respective Mirages and gain the ability to fight the evil inhabitants of this new world. They meet up with their friend Touma, who already has a Mirage, rescue the kidnapped contestants, and sign on to Fortuna Entertainment to become idols and fight this new, mysterious menace. 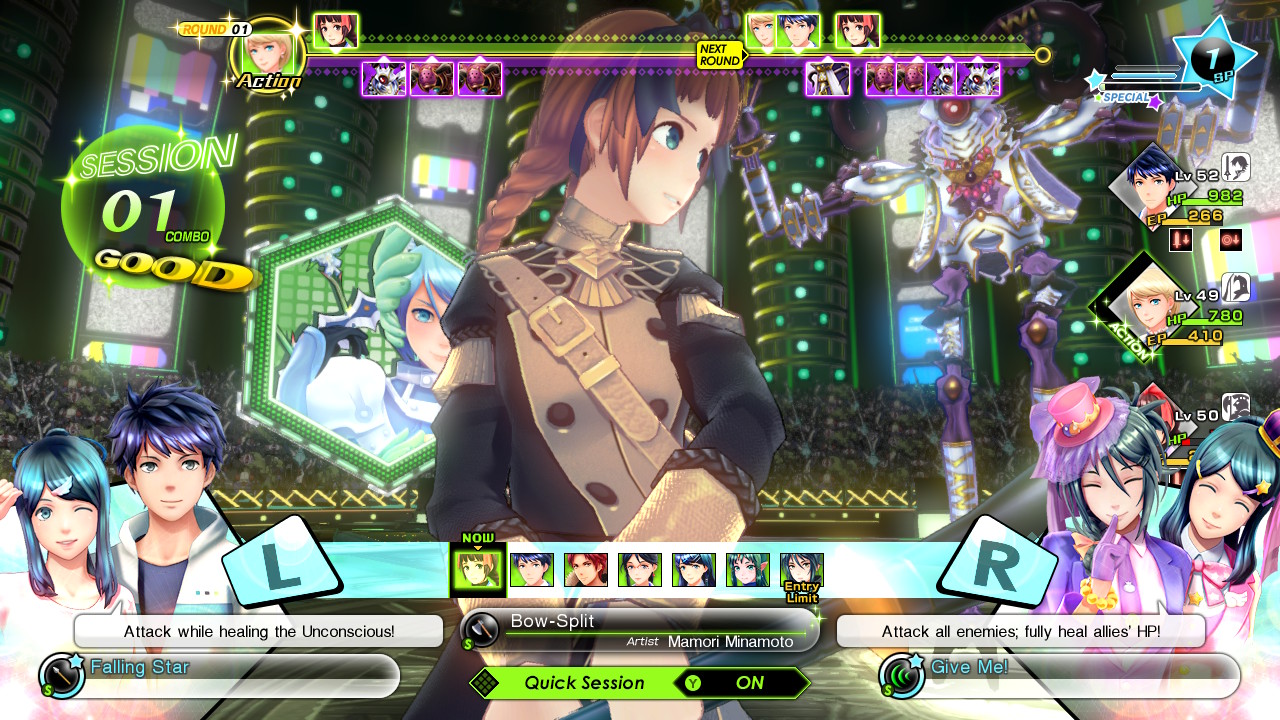 Mirages are the inhabitants of the Idolasphere, and while they mostly serve as enemies, each party member has one based on a character from Fire Emblem, who turns into a weapon called a Carnage that allows them to fight other Mirages. For example, Itsuki bonds with Chrom from Fire Emblem: Awakening and uses swords in combat. This might sound familiar to any fans of the Persona series, and while it sort of is, you won’t be getting any new mirages, you’re stuck with what you’ve got until the end. However, you can return to Fortuna Entertainment’s office at any time and speak with Fire Emblem series staple Tiki to forge new weapons which will give you new spells and abilities in combat the more you use them, develop new character specific abilities, and later on change your Mirage’s class, all using Performa earned by becoming better entertainers. While the game doesn’t have you balancing life as a struggling actor with that of an otherworldly warrior, it does get this theme across very well using three things: the combat, Stage Ranks, and texting.

Let’s save the juiciest bit for last and talk about texting first. In the original Wii U version, the gamepad would serve as your phone allowing you to view a map of the current area as well as chat with your friends over text. In Encore, you just press the plus button to bring up the same menu on your screen. While you won’t often be able to send messages yourself, characters will text you about their thoughts or feelings quite a lot. It gives everyone a nice amount of depth outside of the main story or their personal missions once they reach a certain Stage Rank. Speaking of, Stage Rank represents a character’s current skill as an entertainer. As you rank up by participating in combat, you’ll gain new performa to use in Carnage Unity for new weapons or Radiant Unity for passive buffs (Side note: it’s hilarious to hear the girl playing the very tiny child Tiki say Carnage every time you forge a new weapon). Once you reach certain thresholds with someone’s SR, they’ll contact you for help with something and you’ll be able to attempt their side story. Afterwards, they’ll gain a new ability, be able to reach further heights of SR, and possibly do a special collaboration with another character attack in battle. 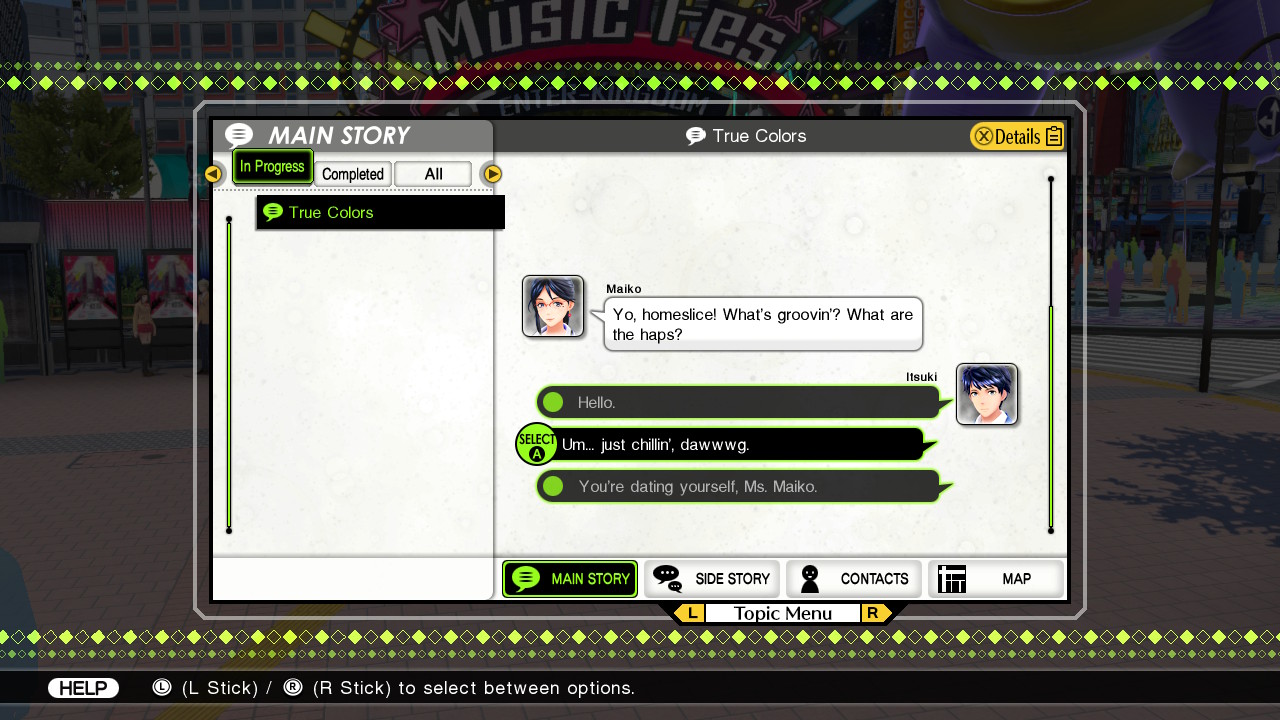 The combat is what holds all of these systems together. It may seem pretty typical for an SMT or Persona game; it’s turn based, enemies and characters all have weaknesses to be exploited, but what makes this one of the best combat systems I’ve played in a long time are the Sessions. After hitting an enemy’s weak point, other characters will jump in and attack one after another. At first, this is just limited to whoever is active in your party and you can’t change targets in the middle of a Session, but later on inactive members and, new to Encore, characters who don’t even join your party will all join in on the Session. The fun comes from setting up a long combo to decimate an entire enemy party in a single action. You have to carefully decide who to attack and when to get the longest session you can, since defeating an enemy after you gain the ability to switch targets during a session will put you in the Overkill state, which ignores enemy resistances. For example, you could encounter a boss whose weakness doesn’t give you a very long combo. The best strategy then is to defeat the additional enemies they summon to Session on the boss and get as much damage in as you can. It’s an interesting and most importantly fun battle system that just gets deeper and deeper as you progress, with things like crossover attacks activating at the end of a Session then immediately starting another one. The highest combo I’ve gotten so far has been 22 hits in a single session, and even after beating the game I can’t wait to go back and see how high I can push that number.

For a game that focuses on the music industry, you’d hope that the music would be good, and thankfully #FE’s tunes are excellent, especially the battle theme and Kiria’s music videos. I do wish there was at least one more battle theme just to spice things up, but I never got bored or annoyed with the Pop-Rock stylings of combat, there are just some songs that don’t get to play out to their full length in cutscenes. Visually and technically, Encore is a nice upgrade to the Wii U version, load times are much shorter, the DLC costumes (except swimsuits) and mini-dungeons are included, and everything just looks slightly better with a bit more anti-aliasing and less general haziness, it also helps that the UI is incredibly stylish. This may just be me, but I found the sound quality to be a bit higher as well. Also, upon starting a new game (cutely called Debut) after choosing a difficulty you’ll decide if Tsubasa wears glasses or not for… some reason. 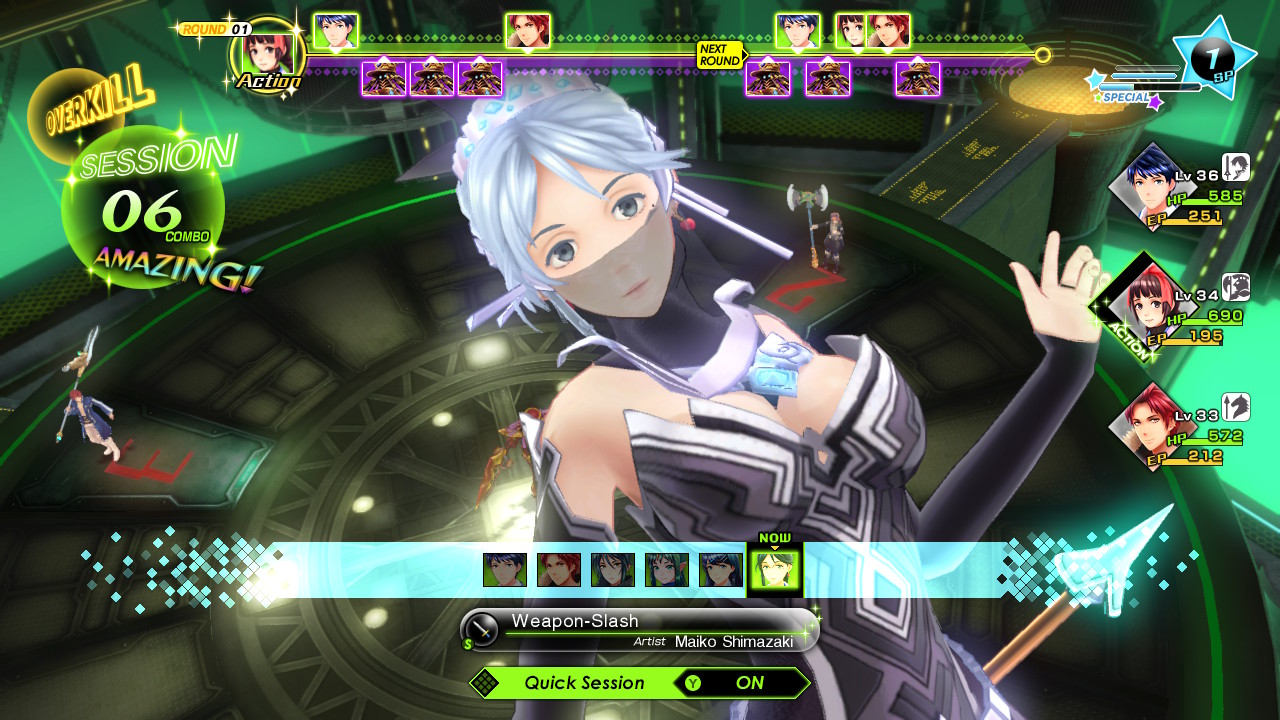 Tokyo Mirage Sessions isn’t all sunshine and roses though, there were a few things that bugged me. Sessions can go on a bit too long, especially since they happen every turn. The new Quick Session toggle remedies this slightly, but it can still make combat feel slower in normal encounters. The removal of the gamepad comes with the addition of a minimap, which can make the screen feel cluttered at times. I also wish there was more gameplay to do with working in entertainment. My biggest problem, however, was with the main character Itsuki. He just doesn’t do much in the story, has almost no personality aside from being nice, and everyone likes him as soon as they meet him and praises his skills. He’s basically the definition of a Mary Sue, as much as I dislike that term. Most of the story revolves around Tsubasa’s growth as well, so why are we playing as this guy? Usually, I really enjoy stories where you’re not the protagonist, like Tidus in Final Fantasy X, but in this case Itsuki eternally feels like a third wheel, even in battle. Since he’s the main character, you can’t switch him out of your active party, and it can get pretty annoying when he can’t really contribute or exploit a weakness to start a Session in some battles.

Tokyo Mirage Sessions #FE Encore is the best version of a great game. It’s got great characters with a lot of depth (except for Itsuki), varied visual themes, wonderful music, and an addictive battle system. Its debut didn’t get the attention it deserved, but maybe this encore will shine a spotlight on one of the best RPGs in recent memory.

David is the kind of person to wear his heart on his sleeve. He can find positives in anything, like this is a person who loved Star Fox Zero to death. You’ll see him playing all kinds of games: AAAs, Indies, game jam games, games of all genres, and writing about them! Here. On this website. When not writing or playing games, you can find David making music, games, or enjoying a good book. David’s favorite games include NieR: Automata, Mother 3, and Gravity Rush.
Related Articles: Tokyo Mirage Sessions #FE Encore
Share
Tweet
Share
Submit