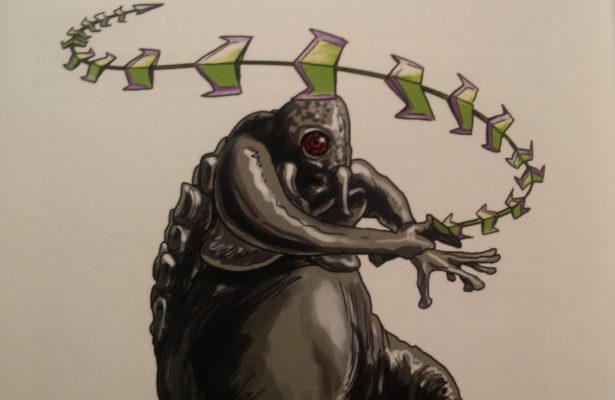 Two great empires, wrapped in their majesty and history, watch one another with wary eyes from across a neutral expanse known as the Frontier. Within this untouched stretch of stars are planets under their own rule, and some that have never been touched by the mighty powers. Cogs and gears constantly turn as they vie for power and survival, but these issues are beyond you. You are Bulldogs, struggling all on your own in a harsh and violent galaxy. You are the lowest of the low, a crew who sold themselves for five years to do the jobs no one else will take. Or in many cases, the jobs others died trying to do.

While Bulldogs has been an established franchise for some time, in late 2016 it came to us in a brand-new package, reincorporating itself into the Fate Core engine. Fate is already a system well built for cinematic action, but Galileo games has gone further than to update Bulldogs into the system, adding and removing elements to uniquely fit it into the high-flying space adventures you will be playing.

The book itself is 6 inches by 9, and clocks in at a hair over 200 pages. It is well bound, except at the edges, which stick out and seem to be threatening to break away. Luckily, the hard cover is attached firmly enough that they will be safe, and the only real impact is that the book seems to want to open to these specific areas automatically.

The pages are sprawling with a cast of characters that fit right into a pulp science fiction adventure. The aliens of all personalities tell you exactly what Bulldogs is all about. It also helps that the human characters range across races and gender, letting everyone know they have a place in the Bulldogs universe. The star maps come from NASA resources, and the detail is impressive, with the majesty yet callousness of space displayed on the pages. Each chapter is coded at the edge with a different shade of nebula or astral body, helping you navigate the book.

Unfortunately, the art goes no further; apart from a few ships, the art is sparse. When it comes to depicting groups, locations, or gear there is almost nothing.

This shot shows us the alien more than the equipment it is using, and is one of the few pieces of art in the gear section

The setting is also sparse, but more deliberately so. The writers give you all the tools you need to fill the galaxy out yourself, without crowding your creativity. The ground they lay is comprehensive enough to set the stage for years’ worth of adventures. If you do find yourself yearning for more, the Heart of the Fury, an extensive campaign recently released, has everything you need in terms of extra lore.

The two powers that sit on either side of the Frontier are distinct, both in philosophy and societal makeup. The Frontier contains unaligned or unexplored worlds to fit whatever your mind can make up. The political overlay will fuel as many intrigue-based plots as you want, or it can loom over your plot without interacting with it, and the elements play off of one another fantastically. Your characters are aware of a wider, more ordered world, but for reasons of their own, they are not a part of it. There are deep conspiracies in the universe, embroiling noble races. There is also a race of sentient teddy bears that are universally reviled for how violent and vice driven they are. The disparity at play reminds you of your place in the universe, and shows you how far you can go if you play our cards right.

The system is based off of the Fate Core engine, but adds in plenty of its own flair. Characters have skills and equipment as you would expect. The most unique facet of the system is Aspects, tags that describe people, places, factions, or anything else you feel you need to stat out. These tags inform everything, and act the same way mechanically. This makes it effortless to determine how something’s properties will affect the environment. Aspects can be invoked by players to their advantage or compelled by the GM to make a character’s disadvantages manifest themselves.

Play is fast and intuitive, but can get repetitive The Aspects system can make things feel bland, as everything comes down to the same key set of bonuses and penalties. It’s an inescapable part of the system, but Bulldogs sidesteps it as much as it can. Characters have Aspects as well as special abilities gained from their race, and they can modify their skills through stunts, special abilities unique to their character.

Less intuitive is the fact that compelling or invoking aspects are done through gaining and losing Fate Points, a sort of story currency that helps players shape the narrative. Constantly keeping track of these points can take some headspace you aren’t always in for during a high-flying space adventure. Also, while the gamplay is intuitive it takes some time to wrap your head around the rules in the first place, to truly understand how they and the Fate Point economy fit together. That said, Bulldogs is one of the best incarnations of the Fate engine I have seen. It intelligently weaves Fate’s story mechanics into its own identity to make something stronger overall.

Overall, Bulldogs has streamlined itself in rare form, without cutting out anything too important. The essentials are still here, but well-honed to make each of them all the more integral to the experience. Ship combat, for instance, removes some of the complexities that bogged it down in previous editions. However, with the addition of the Discover action, your options for exploring space and utilizing your ship’s capabilities are vastly increased.

Combat is faster, more lethal, and has more lasting effects. As you take wounds, which now accumulate more quickly, you also gain negative conditions. These conditions affect your performance during the battle in a multitude of ways. Before death, you can also take Consequences, which are much longer lasting, if not permanent. Your characters gain history and personality as they lose limbs, gain concussions, or get infected by their wounds.

Best of all is the resource system, which perfectly reinforces your status as a down and out crew of underdogs. Resources, like everything else, have a stress track that functions as HP. Starting with all stress boxes filled, it will take work to raise the track to the point where you will have real buying power. The only way to begin with advanced equipment is to take out a loan from one of a number of parties, whether crime lords, disparate nobles, or mysterious patrons you barely understand.

Bulldogs gives you all the tools to kick ass across the galaxy and narrowly escape once you nearly get caught. The lethal combat, simple resolution system, and expansive universe make it among the most satisfying ways to set out and explore the stars.

John Farrell is a legal aid attorney specializing in domestic violence, living in West Chester Pennsylvania. You can listen to him travel the weird west as Carrie A. Nation in the Joker's Wild podcast at: https://jokerswildpodcast.weebly.com/
Related Articles: Bulldogs!, Tabletop
Share
Tweet
Share
Submit