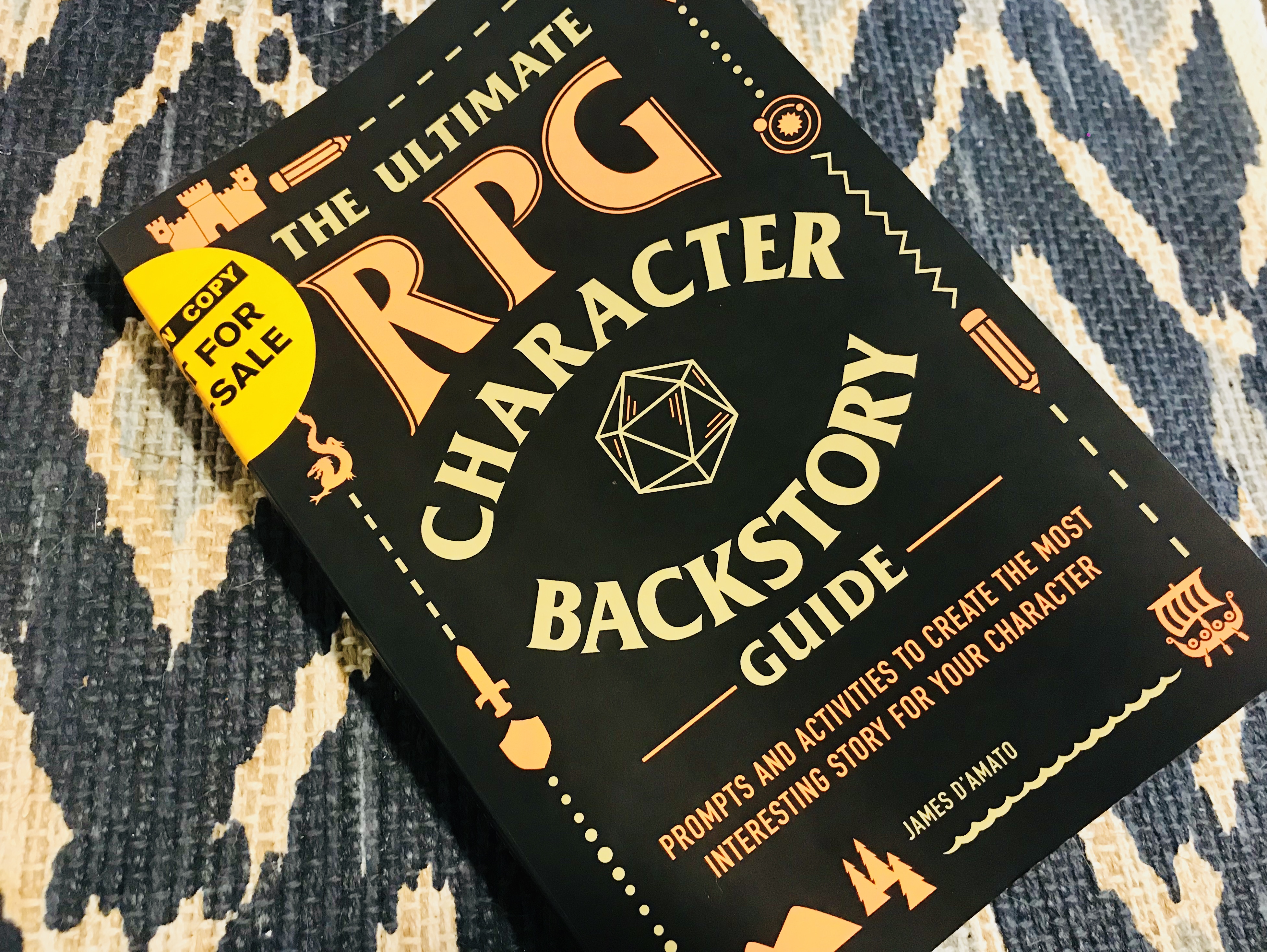 Building a character, be it for a D&D campaign or for a short story, can be as exciting as it is frustrating. There’s a lot to consider when building an interesting character, especially when you have to react in character to something completely unexpected. Just how would your character react in this situation? With fear? Anger? Was that really how your character would have reacted, or is that just how you would have reacted? How fleshed out is their background, how unique are their quirks? How do you go about adding more depth or interest to a well-established character? If you struggle with these questions, then worry no more: The Ultimate RPG Character Backstory Guide by James D’Amato is loaded with exercises, challenges, and hair-brained ideas to help you flesh out your character, regardless of if they’re level one or level 20.

The book is broken up by character level, with a section for characters who are level 1-5, one for 6-10, 11-15, 15-19, and a whole section dedicated to the level 20 characters who are ready to defy a god. Each section is filled with the kinds of questions and situations you’ll be facing around those levels. Levels 1-5 focus on things like winning a bar fight and hunting a non magical beast, where as levels 11-15 involve averting a natural disaster, and the 16-19 crowd will be sealing ancient evils and battling an entire army with their small party. This softbound book measures in at 271 pages of workshops, exercises, and mini-games that are as entertaining as they are useful. Lightweight and easy to read, this book has survived several trips in my backpack, as well as some rather rough treatment of the spine, without suffering any major damage other than bent corners and a few nicks along the edges of the black cover.

Character development is handled a number of different ways in this book, many of which include simply asking you to fill in a blank, or pick an option that best suits your character. Others involve rolling a six or 12 sided die to determine emotions, reactions, etc. Even more charming, several of these exercises involve incorporating your party members into your character’s thinking. For example, when building a fictitious religious holiday for your character to celebrate, the book not only helps you decide if it is celebrated by dancing, feasting, or a religious ceremony, but also has you select a party member who would be perfect to help make decorations, who you’d first approach with the idea of helping you celebrate, and who in your party your character is not going to tell, because they will, inevitably, ruin everything.

While there’s not necessarily anything in this book that you couldn’t dream up on your own, it does a fantastic job of helping you get to know your character quickly, and it does so in a very fun way. It helps you jump right to the core of your character and the experiences that shaped them: what they think about their traveling companions, and how they react to different situations. In addition to helping you understand your character, it also helps you understand what your character thinks about their teammates–perceptions which can sometimes be wrong. I really enjoy the idea of going into a game with my character having already made up their mind about certain party members, only to see my character genuinely surprised by an unexpected act of kindness, competency, or betrayal.

Early chapters focus on simply getting to know your character with simple tools like creating custom idioms and the “Save the Cat” test, which helps you determine your character’s alignment through a hilarious set of options. Is your character the kind of evil that throws a rock at the cat to get it out of the tree, or the kind of evil that convinces a child to try and save the cat, injuring both kid and cat in the process? Do they spare a guilty passing thought that they don’t have time to save the cat, or do they squirm beneath the cat’s judgmental gaze, staring back at it while lecturing it with all the reasons why they can’t save it? These are all solid character development exercises, grounded in lessons taught in writing and screenplay classes, and making use of these tools won’t just help you build a better character, they’ll start you down the path of being a better creator.

The Ultimate RPG Character Backstory Guide has uses beyond creating new characters, it is packed with hilarious thought games to play in order to help you better connect with, and come up with, new quirks for your well established characters. The Towers of Terror exercise, in particular, caught my eye and left me laughing with delight. Designed for characters level 15-20, this scenario has your character move into their dream neighborhood, only to find their most hated rival lives in the tower right next door. Unwilling to be bullied into moving away, your character decides to do everything within their power to terrorize their most unwanted neighbor in the hope that they will vacate.

The setup involves creating this hated rival, either by building your own story or by rolling a d6 in order to determine their race (Undead, Elvish, Fae, etc), their class, and their alignment. Now that you’ve got a clear image of this hated individual, a Draconic, chaotic-neutral bard, in my case, you have to decide why the two are feuding. For my character, it all stems from a flippantly critical view of his autobiographical epic poem, and then a reason why your character can’t simply move away. My character just found a tile that really works in the master bathroom. And yes, in case you’re wondering, those are all options taken directly from the book. The next step is to drive the neighbor away by any means necessary–this includes using animals, noise, obstructing their view, sabotaging their house and equipment, and ruining their social life, among other things. You can either hand-pick options from a hilarious list, which includes raising endangered screaming butterflies, hosting weekly fireworks viewings in your backyard, enchanting the mirrors in the neighbors house, and hexing your rival’s grass so it continues to grow until it violates the homeowners association’s standards, but you’ll have to be careful! If your acts of sabotage accrue more than 20 points, the HOA will come after you, instead.

Okay, so all of that is a little ridiculous, but it’s an incredibly fun mind game to play with your character, and can help you think outside the box. At best I found myself pondering up new obsessions, weaknesses, and unexpected yet IC (in character) ways for my character to react to a situation; at worst it felt like I was writing one of those funny, what-if TV episodes. It does a great job of explaining each section and what you’ll learn from the challenge. Examples include, “This exercise will help you take an existing monster and make it into something truly strange,” “A look at five people [your character] has bested, swindled, or hurt on your journey,” and “How should you play a rebellious, antisocial character in a game that calls for collaboration?”

I took my time reading through this book, trying out exercises with new and existing characters, and handed it off to friends, both those who D&D players and short story writers. I was pretty quickly getting questions about how much it cost, ($14.00 USD MSRP, though it’s currently on sale for a lower price several places), when it comes out, (October 2nd) and if I’d be willing to let them borrow it, which I think speaks volumes. I’ve found myself reaching for the book when trying to come up with a clever little something to fit into a character’s backstory while writing a script, and have had other writers suggest they’d use it to do the same. It’s not only a useful tool for building and fleshing out characters, it’s also written in an incredibly entertaining way, making it fun way to get the creative juices flowing. You can grab your own copy from a number of places, including Amazon, Barnes and Noble, Simonandschuster.com, IndieBound, and Books A Million.

The Ultimate RPG Character Backstory Guide is an entertaining workbook which will help you flesh out characters and dream up backstories, regardless of if you’re working with your first level 1 character, or looking for something new to add to your level 20’s backstory. From basic writing exercises like Save the Cat, to challenges like forging your own heroic relic, to helping you figure out how your character views their teammates, this is a convenient and useful character building tool, for writers and D&D players alike.