I may drink too many energy drinks. In fact, I’m drinking one of the very drinks I’m reviewing as I write said review. Besides that, I buy cases of Mountain Dew Game Fuel, and I did our first review on an energy product with Aimbot 1.1 (check it out here). I was recently contacted and asked if I’d ever tried Xite before, and a few weeks later I’m the proud owner of two cases of the stuff. I’m almost done with the second case, and I have a few thoughts about how Xite might fit into your weekly and possibly daily routine.

So, in a space inhabited by a bunch of other drinks like Rockstar or Monster, why Xite? Well, there are a couple of reasons why this one matches up and does a great job keeping you awake. Xite is a sparkling energy drink, and it’s made up of caffeine, ginseng, amino acids, and sweeteners. And yes, I did read that off the back of the can. Where Xite is a bit different is both in taste as well as in composition, and that’s by focusing on a nootropic formula rather than pumping you full of caffeine and sugar.

I’ve been trying my best to stay away from a ton of caffeine and sugar myself, with not only the intake being a bit much for me, but the crash is pretty quick. This is also accentuated with the fact that, because I drink so many of them, the formulas tend to wear off on me quickly, with the only exception being Mountain Dew Game Fuel. I can only guess those simply have a specific concoction that works for me. Xite is still using caffeine, but in a dose that doesn’t leave you as dependent, with only 118mg in a 330ml/12oz serving.

This, combined with other nootropics in B-vitamins (B6 and B12), and zinc seem to be a good blend in keeping you alert. As I’ve been working my way through these, I’ve noticed my body adjusting to them more and more. While at first it wasn’t really doing much, these have a similar effect to Game Fuel for me. I can say this with certainty when playing Call Of Duty: Black Ops Cold War, a game that requires your full attention. The other day I played four matches, with a 1.85 kill to death ratio in them, 113 kills to only 61 deaths. I play a lot of Call Of Duty, but I hadn’t recently, so the Xite does seem to be giving an extra alertness to go with my already quick trigger fingers. 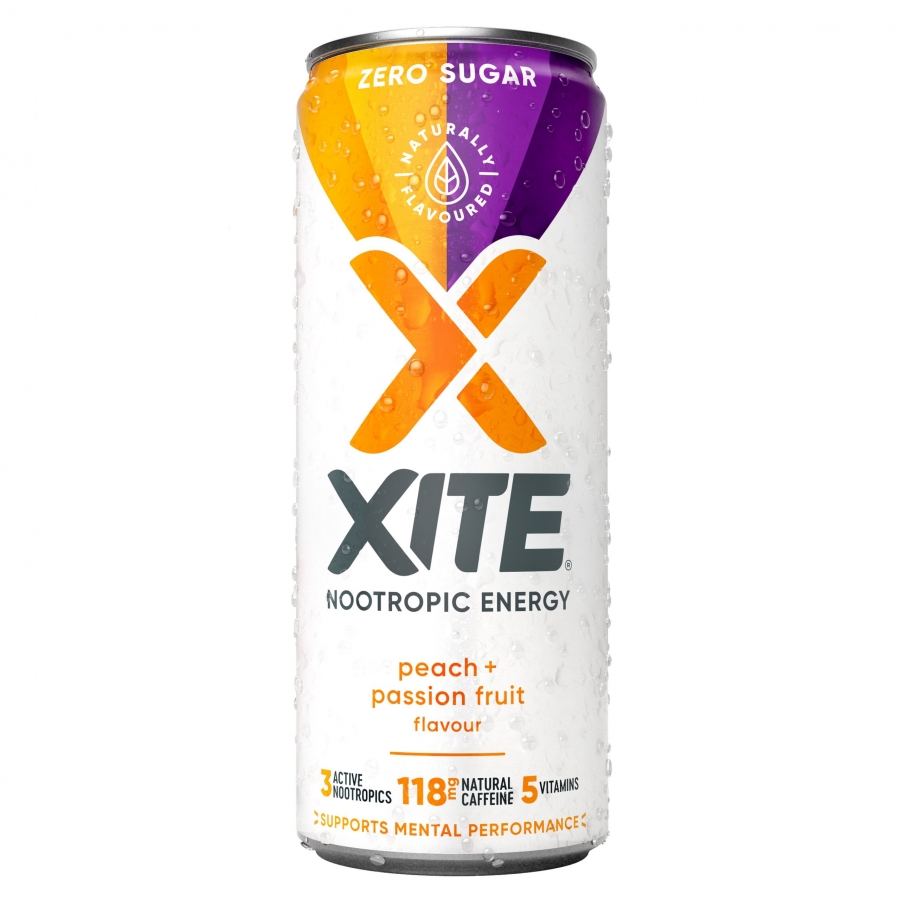 The biggest thing many will ask will be how Xite tastes, and that’s an interesting one to answer. I’ve honestly never tasted an energy drink quite like this one. As mentioned before, it’s advertised as a “sparkling energy drink”, which is something I’ve started to see on the market. I’ve tried Yerbaé, only to be met by a foul taste that resembled more of a tonic water, and I don’t like that. Xite still follows those lines, but in using natural flavors has put together something that tastes pretty decent, although it’s still not great compared to other energy drinks. The Peach+Passion fruit is probably the most sugary tasting of the two flavors available, with Raspberry+Watermelon the more tonic-y. I can’t say I’m the biggest fan, but they are definitely ahead of where most sparkling brands are right now in trying to capture the growing market. I do wish there were more in terms of flavors available though, especially being someone who enjoys blueberry drinks, and the more acidic tone of Xite might fit that well.

As far as the consistency goes, I’m really happy with the “mouthfeel” of Xite. A lot of times I’ll pick up a Red Bull just because it isn’t nearly as syrupy as it’s brothers in the cooler, and Xite compares pretty well to it, even if Red Bull does use a syrup. There’s also no nasty aftertaste, at least for me, and I’m really surprised at that given plenty of energy drinks taste fine going in but howl at you going down. Pleasant surprises seem to be at the forefront of what Xite manages, and I’m down with that. 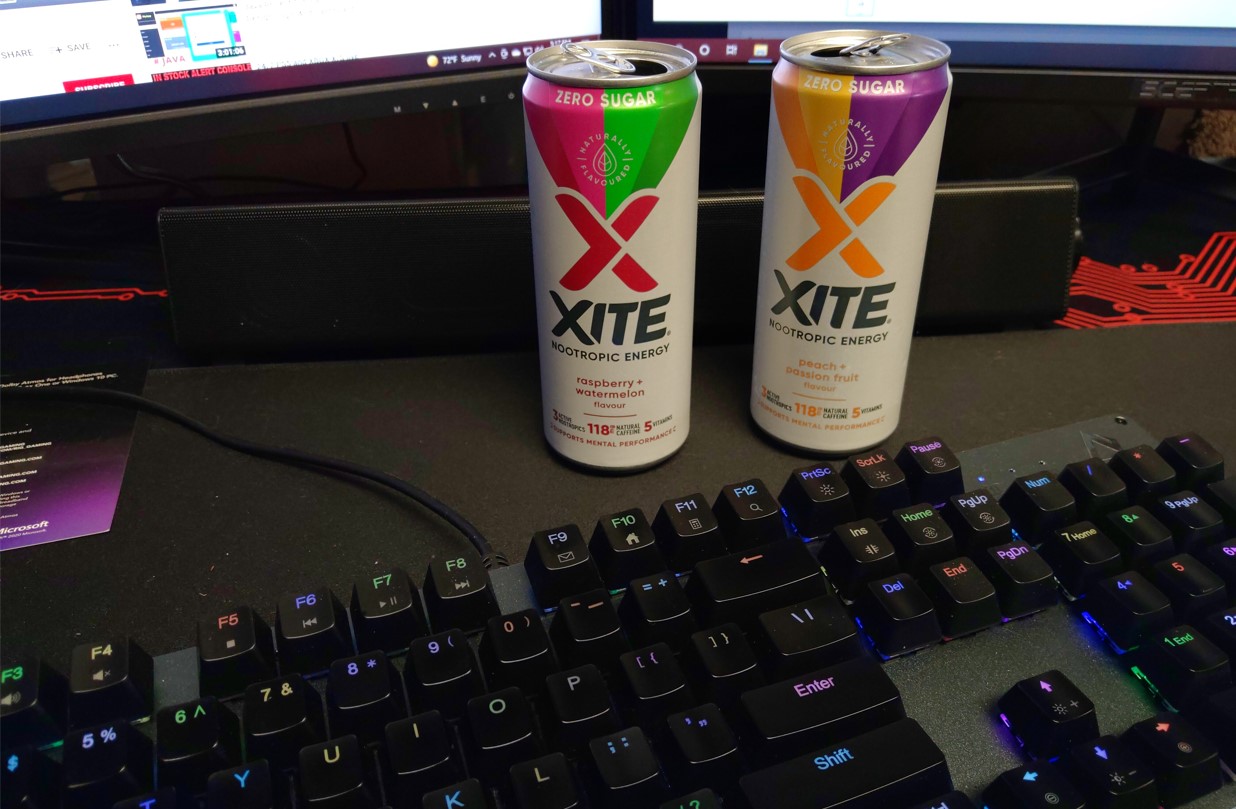 Besides all of the tastes and such, I keep bringing up sugar, and without mentioning that Xite doesn’t have any in it. It also has bypassed the aspartame factory on the way, and that is a big win with all that has come out on the effect aspartame can have on your body. I won’t get into particulars, but it’s not the best way to artificially sweeten a soda. Not only will this drink make its way into your diet, but it’s also vegan friendly, so no matter what your dietary decisions, this should fit in perfectly.

With no sugar being present, the focus being on a lesser amount of caffeine, and sporting more natural energy infusion, I’m happy to say I’ve not crashed while drinking Xite. Lots of energy drinks laser in on that sugar boost or massive caffeine intake to give you a surge of energy, but leave you feeling worse after the fact. Xite seems to fall into a similar vein as Aimbot did for me awhile back (albeit without the 300mg of caffeine), like a leaf slowly descending as it falls from its tree branch. It’s appreciated, especially since I can drink two of them in a day and still not reach the same caffeine consumption as some others.

Xite is a good alternative for energy drink consumers who want to either come off the sauce, or just cut down on the crap from other brands. It’s got a good blend of nootropics, and with zero sugar and no aspartame, it’s probably better for you and won’t leave you crashing from a sugar high. I’m still not the biggest fan of the taste, but for a sparkling drink it’s not half bad. Overall, Xite does what you need it to, giving you an extra mental and physical boost when you need one.

David Burdette is a gamer/writer/content creator from TN and Lead Editor for Gaming Trend. He loves Playstation, Star Wars, Marvel, and many other fandoms. He also plays way too much Call Of Duty. You can chat with him on Twitter @SplitEnd89.
Related Articles: XITE ENERGY
Share
Tweet
Share
Submit