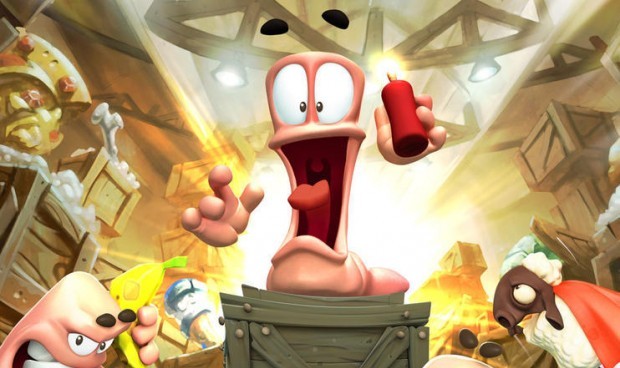 The Worms Series started nearly twenty years ago and spans more than 20 titles available on nearly every platform along the way, so it’s a safe bet that if you’re a gamer, you’re familiar with the series. Their latest title, Worms Battlegrounds, brings the familiar gameplay to next-generation consoles in one of their biggest Worms titles yet.

The story of Worms Battlegrounds isn’t very interesting, but as is the case with previous Worms games, the story is hardly the point. The plot has the player working with rich and famous explorer Lady Tara Pinkle to defeat the evil Crowley-Mesmer, who has hypnotized worms in order to destroy the museum or something. You listen to Lady Pinkle make a few jokes, then blow stuff up, then rinse-and-repeat. Like I said, the story doesn’t matter and is really just a platform for destruction, which is fine, because that’s never been the focus or the point of the Worms series.

Gameplay has really not changed at all, which should come as no surprise to anyone who has followed the series closely. Players take turns moving worms through levels and destroying all of the evil worms that stand in their way. Worms Battlegrounds has more weapons than any before it, with 65 available in total that will either directly damage enemies or help the worms traverse stages. The Worms games have a format that works and they stick by it pretty closely, so if you’ve had any exposure to the series, then you should know what to expect.

The story mode has 25 missions in all, with a pretty strong variety of maps mixed in, but carrying few surprises. Additionally, ten time attack missions are available that provide an added challenge, but are more-or-less the same as the story missions, albeit with a ticking clock. Of course, multiplayer returns as well, which pits up to four players against one another in free-for-all combat, and this mode hasn’t lost an ounce of charm. Fighting against your friends is every bit as chaotic and fun, even if almost nothing has been added to improve upon previous entries (aside from more weapons).

For all of Worms Battlegrounds’ positive similarities to its predecessors, the difficult controls are not one of them. Jumping, wriggling, and otherwise finagling oneself around awkward mountains of dirt is not any easier than it ever was, and I found myself constantly jumping off cliffs and making really dumb mistakes due to unpredictable controls. In multiplayer, these mistakes are pretty hilarious, but after the first dozen times the joke gets old and one begins to just wish they had made the worms easier to control.

Considering that Worms Battlegrounds is the Worms Series’ debut title on the new consoles, the game doesn’t look or sound any better for it. The graphics still have a cartoony look and feel that don’t really need improving, but the fact that after all these years my worms are still shoving half of their bodies through objects and walls due to poor object clipping is disappointing. The game’s audio also seemed to start freaking out twice during my time with it, which caused my speakers to make a popping noise every few seconds, and I had to restart the game. Overall, the presentation is sub-par from what I’ve come to expect from games on the new consoles, but exactly what I’ve come to expect from the Worms Series.

The good news is that fans can now play a new Worms game on their new consoles; the bad news is that Worms Battlegrounds does almost nothing to advance the series and so makes it hard to justify yet another Worms entry to begin with.