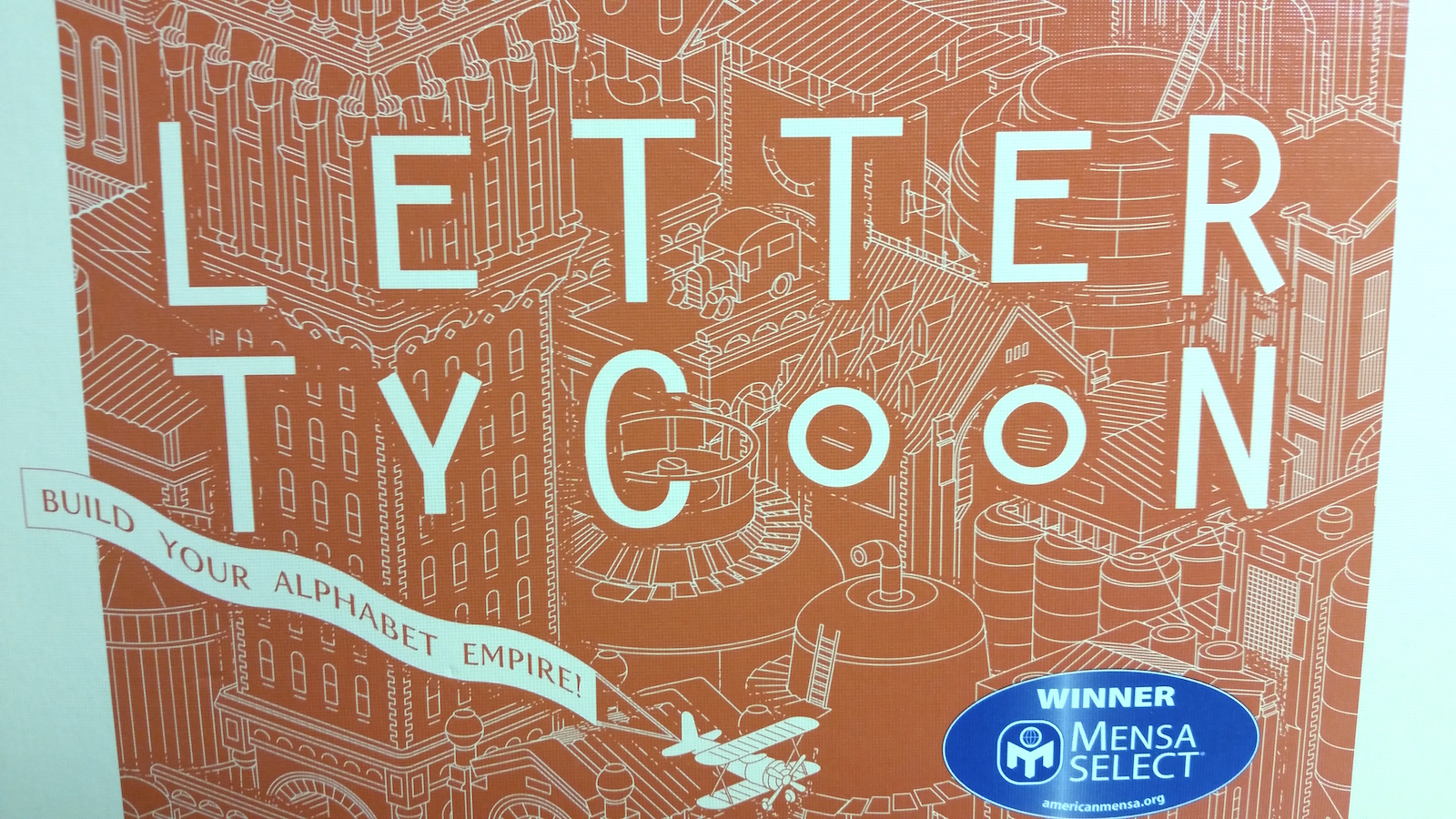 It’s interesting to browse through Boardgamegeek and see the multitude of word game offerings that are available. You wouldn’t think there would be so many games based on the 26 letters of the English alphabet, but there have been over 100 games with some sort of word association to them in the past three years. There’s no shortage of games for logophiles to practice their skills, and it’s certainly appreciated when a game puts a unique spin on word construction. Breaking Games’ Letter Tycoon does just that with its engaging game of building both words and stock portfolios.

The premise of Letter Tycoon is to use cards to build words to score points. The length of your words will determine your income for the round, and that income may allow you to buy a patent of a certain letter. Patents can generate further income to buy greater patents or simply amass wealth. It may sound more like Monopoly than Scrabble, but this is a word game wrapped around a remarkably streamlined business engine.

Letters are priced based on their usage frequency, but the seldom used letters come with special bonuses.

You begin with a hand of seven letter cards drawn from a deck, and you will also always have a community pool of three cards to aid you. From there, you work to build the longest word you can. Unlike Scrabble, the types of letters are really immaterial. The length of the word is the sole determination of income for your round. Also unlike that ubiquitous title, two letter words are not used. Three letter words are the smallest you can make and will garner you a single dollar. If you manage to score six letter words or longer, you’ll also gain a stock along with your income. Stocks are unusable during play but are banked to be added to your scoring total at the end.

Once you’ve played your word and earned your income, you’ll look through the available patents. Each letter of the alphabet has its own patent, and on your turn, you can only buy a patent for a letter within the word you just created. This adds a subtle strategic layer to the game where you may forgo a longer word to play a shorter one containing a letter with an available patent.

As you collect letter patents, you’ll earn money each time other players use them.

Patents will help you earn cash later in the game. Should an opponent use a letter you own a patent for, you earn an additional dollar from the bank. The more patents you own, the more money you’ll generate. Patents vary in value, with common letters such as E and A being the most expensive to purchase.

Rare letters, such as Q or Z, are inexpensive. They lack income value due to the infrequency, but they earn the owner bonuses, such as adding an s to any word or the ability to each double value to words that contain at least half vowels. Additionally, the regular game Q card allows you to double the value of any word where it’s been used.

These bonuses can make for some interesting word play in the later stages of the game. All bonuses can piggyback off each other. For example, playing the word “quite” would normally result in $3 going to you. The Q would double that to $6. If you own the J, which allows you to double words containing at least half vowels, would double that again to $12.

Longer words not only grant you more money but can also earn you additional stocks.

The number of players, two to five, will determine how much value in patents need to be owned by someone to trigger the end of the game. The winner is the one who has the highest value of patents, held stocks, and cash. The way the patents are scored really balances out the importance of each letter. Common letters have great value with the highest scoring patent cards, but rarer letters can help you land precious combos to earn cash. It’s a nice balance that allows you to follow the strategy you want, whether that be amassing a monopoly on vowels or chaining combos together.

The caution is to not be too myopic in building your letter empire. The game can become a runaway with someone is allowed to collect too many of the rare letter bonus patents. Multiple combos can result in a single word being worth so much cash that the game becomes a battle to catch the letter. While you can’t directly affect your opponent’s empire, you do need to keep a watchful eye on what they are buying.

Breaking Games went with a pleasing retro design. The letter cards are illustrated with various industrial businesses or supplies while the patents depict different products. The game is colored in simple greens, dark oranges, and blacks that give the game a slight Steampunk feel to it. The money and stocks are of such a thick cardboard, they almost feel like chips rather than pieces. For what you get in the box, it’s well worth it’s $35 MSRP, and even more so considering it can easily be found for less.

Sometimes games can get too cute with their mechanics and lose sight of what the core game is about. Not so with Letter Tycoon. The emphasis is clearly on building words to score points, while the patents add an interesting layer to game play that will keep this game fresh. In a world of many word games, this is one worth playing.

Letter Tycoon combines a simple stock system with word building to create a strategic word game. Players will score cash from constructing words while using that cash to buy patents on letters of the alphabet. Your prowess at wordsmithing will be the key, but managing which patents to buy early and which to save money for will determine your victory.