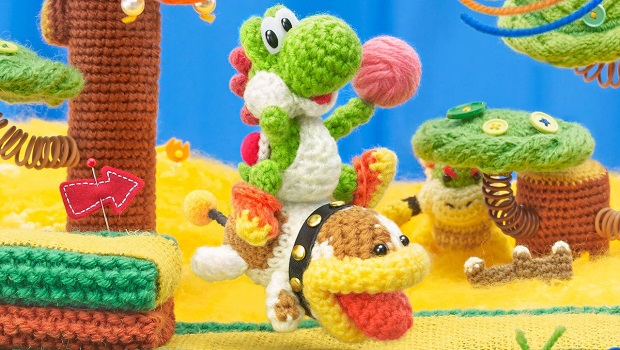 While the Wii U is officially discontinued and will not have any more first-party titles after Legend of Zelda: Breath of the Wild comes out, the 3DS is still alive and kicking. With a couple of Wii U to 3DS ports and remakes, Nintendo seems content to port another Wii U exclusive to the handheld, with Good-Feel’s Poochy and Yoshi’s Woolly World the next title up for grabs. While the enhanced port of the game does sport some new features, are they enough to make you venture forth this adorable yarn of a tale again?

If your first reaction isn’t trying to hug the cutest thing you know, you might be a robot.

Poochy and Yoshi’s Woolly World stars a cast of loveable yarn Yoshis in a world made entirely of arts and crafts materials, such as rolls of yarn mixed with pieces of cloth. One day, the mischievous Kamek wrangles up a bunch of Yoshis and captures them. It’s up to you and fellow teammate Poochy to save the day in over 48 levels and 6 worlds.

C’mon Poochy, after I said you were going to help us out…

The game plays as a standard platformer would, with your Yoshi jumping and gulping around the landscape. Yoshi can eat most enemies and use them as eggs in order to ricochet them to hurt bigger baddies or find secrets scattered around the levels. In addition, he can manipulate the environment in order to traverse secret segments, like sucking up a thread of yarn in order to reveal a hidden pipe. Each level has a horde of collectibles which will garner some replay value; these unlock different skins for your Yoshi as well as some brutal bonus levels. The game still sports sharp controls, and getting on track is very simple.

If you read our review of the Wii U version of the game, you’ll notice that Poochy and Yoshi’s Woolly World is very similar to its console counterpart. The new features revolve around the cute little doggie companion, Poochy. While he is in some main levels as a helpful sidekick, in this game he’s given a few different bonus levels that you can experience as you go through the main game. These levels have Poochy running around in an endless runner type stage, complete with obstacles and other collectible items, where he has to find three of his mini-offspring as well as get to the end. They’re short little reprieves, and nothing too substantial, but it’s a nice touch in an otherwise identical port. The Yoshi Theater is also a new inclusion, which sports 31 different shorts featuring the Yoshi gang. These affairs last less than a minute, with a simple question asked at the end that will grant bonuses if you can answer them correctly. While these additions are great fun, I really clamored for more Poochy content, and bonus content in general.

The shorts aren’t in 3D, but they’re adorable.

While the bonus features do make the experience worthwhile, the same problems remain with this release as in the original game. The yarn world isn’t used to its full potential, with short segments featuring a Yoshi morphing into various contraptions as a highlight of the levels but too infrequent to be satisfying. The difficulty seems a bit inconsistent as well, since you have gargantuan bonus levels contrasted to meager boss battles. Perhaps the reason for this is the lack of local co-op, a big draw for the original release. It does become a bit more difficult to grab every collectible without another person to help you out, after all.

Finally, the performance of the game is solid. Regardless of what 3DS model you use, the game runs at a satisfying pace, with a miniscule amount of slowdown during more demanding stages. While newer 3DS titles hamper the original 3DS’s performance, this game holds up on either model. However, the biggest problem with the port lies in its graphical style; while the original game had a very vibrant yarn aesthetic, and exploited the Wii U’s hardware to provide some very great eye candy, the 3DS version feels like a standard platformer with a coat of yarn-colored paint splashed on it. It doesn’t look terrible, but it doesn’t have the shine of the Wii U version.

Poochy and Yoshi’s Wooly World remains a solid platformer and a little added content will make newcomers who experience the game for the first time happy. However, the same problems are prevalent in this port, and while it’s a great experience, does lose some of its luster next to its console counterpart.

Elisha Deogracias is an aspiring accountant by day, freelance writer by night. Before writing for Gaming Trend, he had a small gig on the now defunct Examiner. When not being a third wheel with his best friends on dates or yearning for some closure on Pushing Daisies, he's busy catching up on shonen manga and wacky rhythm games. Mains R.O.B. in Smash. Still doesn't know if he's a kid or a squid.
Related Articles: Poochy & Yoshi's Woolly World
Share
Tweet
Share
Submit