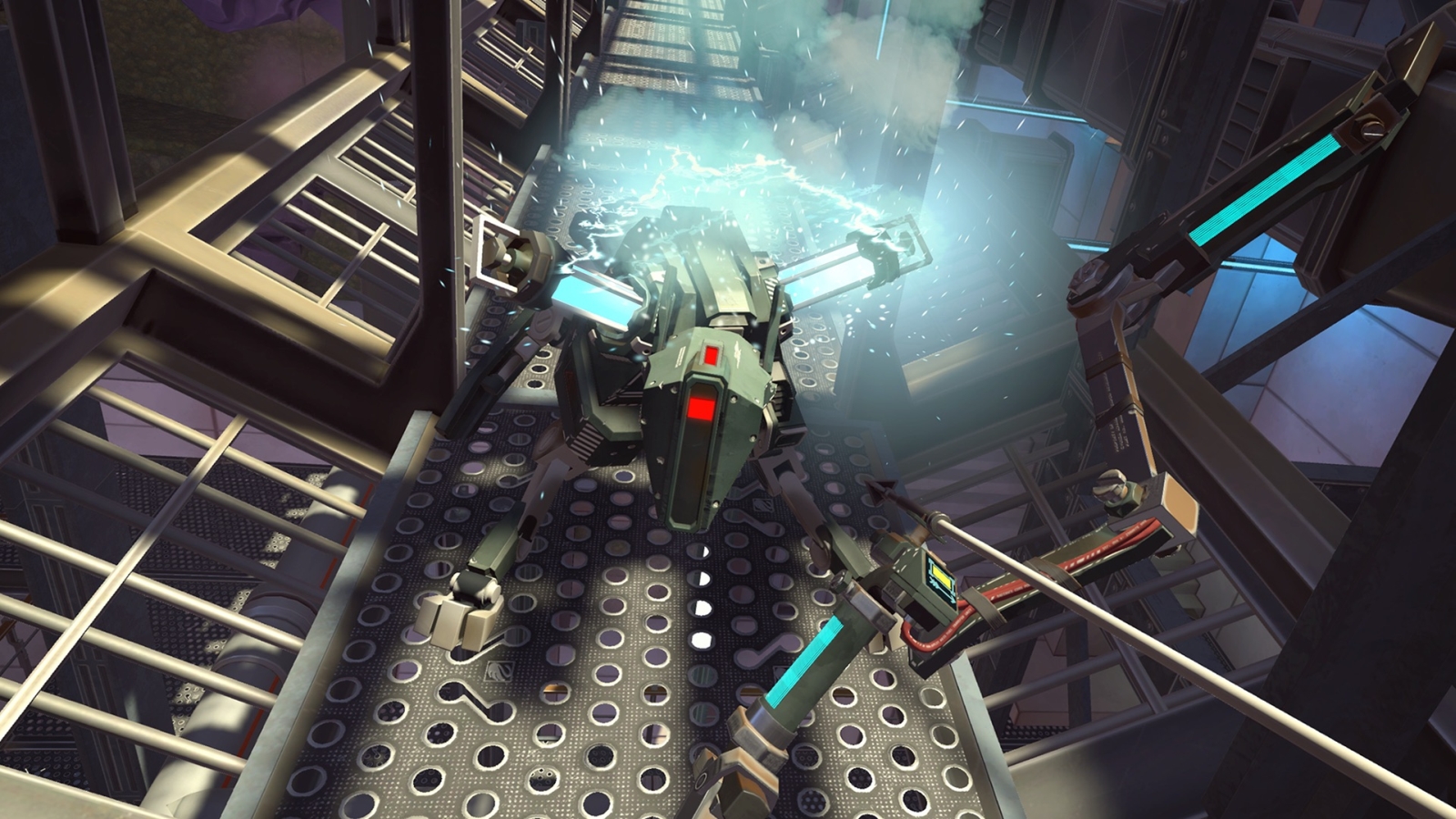 The VR space is full of simple demo-like experiences, but only recently are developers leaping into the world of virtual reality with what could be described as full games. Apex Construct casts you as a silent protagonist turned arbitrator between two rogue AI, aptly named Fathr and Mothr. These two AI preside over a dystopian and broken version of what I can only imagine is Earth. While both accuse the other of trying to kill you, it becomes increasingly obvious that neither of them have entirely clear motives.

The game opens as Fathr resurrects you after an event called “The Shift” has wreaked cataclysmic havoc on the planet. He immediately sets himself as savior and hero, pitting the player against Mothr and her roving band of robot creatures. It doesn’t take long before the player begins finding hastily scribbled notes from what seem to be previous iterations of the player, raising questions around your resurrection, what happened to those previous incarnations, and an eyebrow-raising query about why your hand has been swapped out with a robotic replacement.

Developer Fast Travel Games leans heavily on the bow mechanic, something we’ve seen in quite a few VR titles. What’s different here is that it also has a baked-in energy shield capable of absorbing incoming fire from the aforementioned spider-like robotic foes. This takes a little bit of practice as the arrows fire in an arch, and without a targeting reticle to set up your aim. That said, there is a twist.

Your replacement hand has a trick up its robotic sleeve, and that’s a full inventory system, and the ability to gather up energy which doubles as experience points. Banking this energy and schlepping it back to the central hub lets you spend it at a specialized vending machine that provide mines, energy recovery, mines, and upgrades to your bow and shield. You’ll have an opportunity to do this between missions, but dying causes you to lose all of that precious XP, which can be frustrating when you are resurrected back at the hub with nothing to show for it.

These little guys? They aren’t your friend.

Apex Construct is one of the better looking titles on the platform. Throughout the six environments in the game, and despite how close you’ll often get to objects, there are very few jagged edges. The bizarre world is somewhat unpredictable, often dropping a body of water right in the middle of a skyscraper. Signs, bus stops, and buildings jutting out of rock outcroppings are completely normal here, and all of them are presented in a soft stylized color pallet. The framerate also stays rock solid, which is critical to reducing movement-based nausea.

One of the best parts of Apex Construct is that it doesn’t hold the player’s hand. From the opening moments, you are left to uncover things through observation. There are signs on the wall, but they don’t glow and make themselves obvious. There are computers, but there’s no tutorial to walk you through the manual input interface. Hacking these computers helps you uncover additional story elements, unlock doors, and often providing some direction on where to take your exploration next.

Puzzles and danger around every corner.

Unlike other VR games, there is also a collection element in Apex Construct. Some puzzles simply can’t be solved with the equipment you have when you first encounter them as you need an additional upgrade or two.

On the other robotic hand, the game feels decidedly hamstrung by the flick-based control scheme. Pressing triangle on the Move controller and then whipping it in the direction you’d like to rotate causes you to turn that direction most of the time, but simply pressing triangle also causes you to spin around 180 degrees. This means you’ll often under or over-rotate, which can be lethal in combat, or simply frustrating during exploration. Hunting through the menus reveals the “smooth” motion option, but tracking in this mode is largely dependent on your ability to withstand that type of motion control. Outside of the smooth movement option, movement is handled with the typical teleportation mechanic we’ve seen on other PSVR titles. Knowing that this title is coming to Vive and Rift, I can’t help but feel like the greater fidelity of the light towers on those platforms would create a smoother movement set. Movement is a nut other developers have cracked, so I’m not sure why this Apex came out with such a rudimentary approach.

Future technology amidst the ruined world.

Beyond the controls, my biggest complaint in Apex Construct is that the gameplay loop becomes obvious very quickly. You’ll hack a computer, get a code, find a key, use the key to open a door, kill some enemies, retrieve a power cell, open a door or activate a machine, and repeat this process in the next area. It’s a step up from the scourge of wave-based bow shooters on the PlayStation VR platform, but I wish it was a little more nuanced.

Apex Construct provides some excellent exploration and exposition in a compelling and beautifully bizarre world. While there is a fully-baked experience here, the engaging story and compelling gameplay is marred by PSVR’s limited control scheme. It represents a step forward for the platform, and for storytelling, but a bit of polishing or patching would bring the controls to heel.

Gerard is a tech-obsessed sci-fi aficionado. Working in entertainment, music, and tech - he blends his love of gaming with a passion for art and storytelling. You can find him on just about any network by searching "GerardUht".
Related Articles: Apex Construct, VR
Share
Tweet
Share
Submit