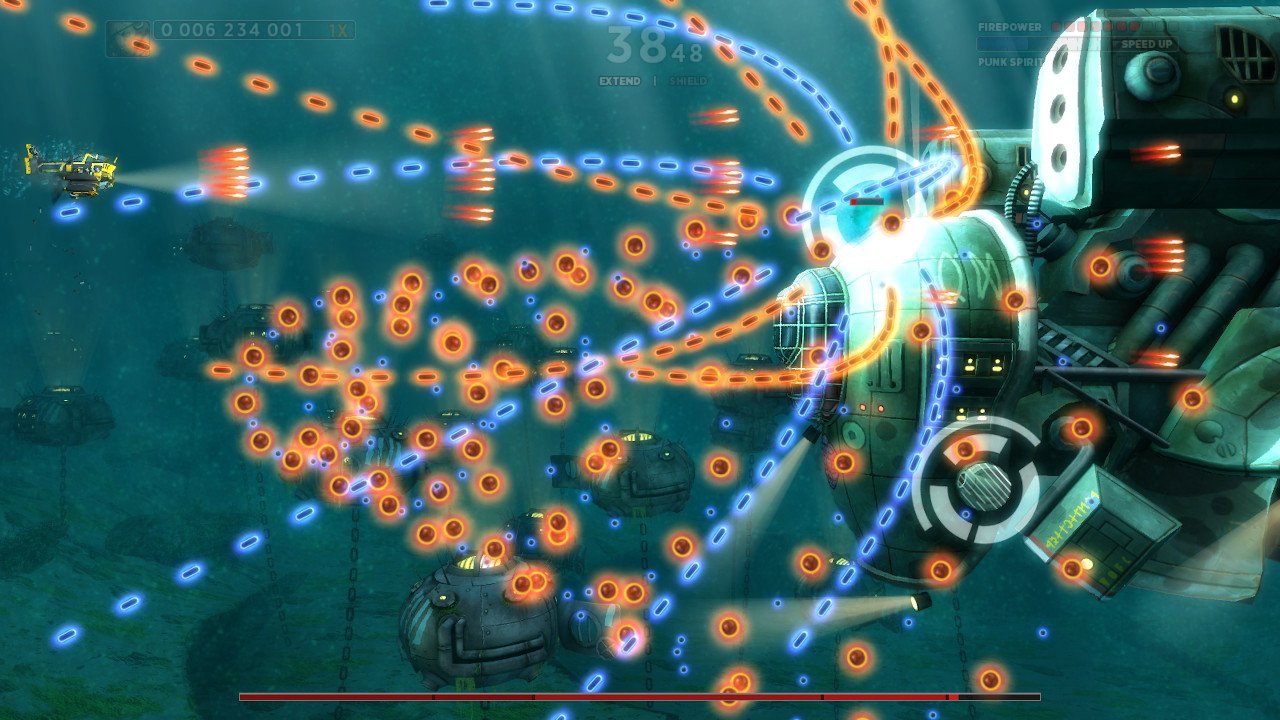 From excellent titles like Graceful Explosion Machine to enhanced re-releases like Striker 1945, there’s no shortage of shoot ‘em ups on the Switch right now. The bullet hell subgenre is also gaining some more representation on the console, with the release of Sine Mora EX, an enhanced release of the 2012 Sine Mora. With bone-crushing but fair difficulty, a creative slew of bosses, and a plethora of content, this is one shooter you should check out.

Like all games in the shoot ‘em up genre, Sine Mora EX pits you against a horde of different enemies as you dodge and shoot opposing forces. Each of the seven characters you can control has two weapons, a primary shooter that is upgradable during levels, and a sub weapon that has limited use. By grabbing different powerups, you can also increase your score, but getting hit will cause you to lose some firepower upgrades.

The main mechanics, however, lie in the title (“Without Delay” in Latin): You get no lives and a scant amount of continues, and the amount of time left constitutes your health. Destroy enemies to get seconds back, get damaged and your time is shaved off. If your time is zero at any time, boom goes the dynamite. (There are also some insta-kill situations that range from logical to preposterous.) Additionally, you can have a limited use capsule that has effects like slowing down time, reflecting bullets, and even rewinding time (the last of which can save you from death.) These two mechanics create a chaotic gameplay flow that is equally reliant on shooting and dodging, and while the tutorial stage eases you into the swing of things, you’d better get used to it all before you get pulverized.

Getting pulverized into mush is par for the course here, however, as the game offers four difficulties, all varying degrees of challenging. While the included story mode has the two easiest difficulties (normal and challenging, the latter of which is required to play for a “good” ending), the arcade and score attack modes are permanently ratcheted to hard and insane difficulties. In the latter difficulties, perfect play is all but necessary, as one hit could spell death since time penalties are more lethal the further you go. However, the story mode difficulties are reasonable for casual fans, and offer more accessible mechanics to assist with the brutal bullet patterns.

The bosses here are a delight.

While the main gameplay is great, there are parts of the game that feel unfair, like taking damage and scrambling to grab your firepower upgrades with no invincibility frames. This caused a few moments where I was stuck in a loop with grabbing powerups and then losing them immediately as I went headfirst in a stream of bullets, killing me in a matter of seconds. Coupled with its difficulty, this may turn off those who aren’t used to the frantic gameplay. Some scoring mechanics may concern veteran players as well (such as the use of your capsule ability or subweapon resetting your score multiplier back to one), so score junkies might have a bit of an issue later in the game. There are online leaderboards for each mode for those that want to brag about their achievements, so that may motivate hardcore players to try and power through the stages without using certain powers.

One of the highlights of this game is the boss battles. You have mini-bosses and end of stage bosses, and they’re all pretty unique, from the very first mini-boss spraying tentacle beams at a quick pace to an end boss that’s a literal fortress you must traverse and destroy. They’re all brutal, but have different tells and strategies you can memorize, thus giving you an upper hand if you practice and retry. There’s even a boss training mode you can try after encountering an enemy, so feel free to try again. It’s because of the tools given to you that the bosses feel fleshed out rather than tacked on. It was interesting to see the boss design and how to tackle each one, and I always had a feeling of dread and excitement as my precious seconds ticked away but I got closer and closer to decimating my foe.

The story mode is a great way to begin the game, however (Sine Mora EX has all of its modes unlocked, unlike the previous release which had arcade mode locked until you beat the campaign). It’s a surprisingly mature tale that deals with time travel, death, and even sexual themes. The story centers around the Enkies, a species that is versed in time travel, who are being enslaved and exposed to a fate worse than death. There are two storylines that intertwine with each other, and while I won’t spoil anything here, it’s a pretty neat narrative for a genre that isn’t usually known for story-driven experiences.

That said, there are times when Sine Mora EX attempts to be too edgy, with one character dropping some very strong language (most likely contributing to the game’s M rating). It’s not a deal-breaker, but with the cast comprising of anthropomorphic animals, it can come off like Shadow the Hedgehog with the story at times. Sine Mora EX also includes an English dub with its original Hungarian dub, and both are serviceable, with adequate delivery in both versions.

Something something chaos emeralds?

I really enjoyed how Sine Mora EX plays on the Switch. The graphics look gorgeous either in handheld or docked mode, with bullets and enemies clearly displayed on the foreground. The game runs at a smooth rate most of the time; I believe the only times when I really suffered a framerate dip was in a mid-game stage featuring tons of enemies, but other than that, it’s fine. The added content, while slightly superfluous, is a nice addition to round out the package. You have two player co-op and versus modes (which don’t hurt, but I just stuck to the single-player modes), as well as assorted challenges which make the main game look like a cakewalk. The biggest detractor on getting this version is the price, however: While the PlayStation 4 and Xbox One versions are $19.99, the Switch version is $29.99. It’s a great price for gamers that like the genre, but for those who haven’t experienced a bullet hell game and want a cheaper experience on the Switch, I’d recommend Graceful Explosion Machine to ease you in before tackling this.

Prepare to drop your joy-con a few times.

Sine Mora EX is a tough-as-nails but engrossing shoot ‘em up that has some innovative mechanics and a pretty interesting story. While it may not be for everyone, those who are interested in the genre will find something to love with the new improvements that the EX version provides.

Elisha Deogracias is an aspiring accountant by day, freelance writer by night. Before writing for Gaming Trend, he had a small gig on the now defunct Examiner. When not being a third wheel with his best friends on dates or yearning for some closure on Pushing Daisies, he's busy catching up on shonen manga and wacky rhythm games. Mains R.O.B. in Smash. Still doesn't know if he's a kid or a squid.
Related Articles: Sine Mora EX
Share
Tweet
Share
Submit