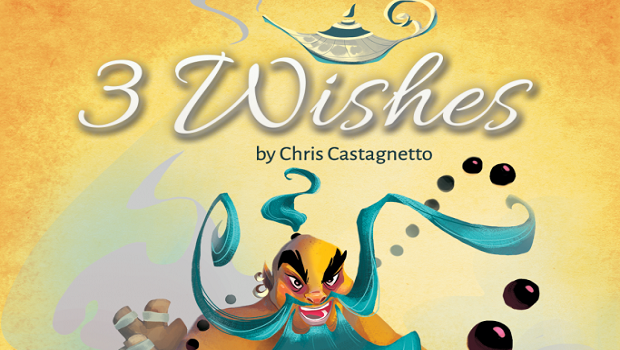 As a casual board game player whose experience caps off at Catan and Pandemic, I like games that are very simple and quick, while also being lighthearted and fun. Strawberry Studio has released 3 Wishes, a small card game that rewards quick thinking and a little mischief in order to win, but does it have what it takes to settle in between rounds of meatier board games?

3 Wishes is a social deduction card game for three to five players, where a genie desires to fulfill everyone’s wishes. Each player is given three cards, with an additional three cards placed in the middle. Each card has a given type and color: superpowers, world benefits, and gifts. Each card displays an illustration, a wish type, and how many points you can earn if the wish is fulfilled. In order to score points, you need to have one of each type by the time the game ends. Lacking even one of these types means you don’t get to gain points, and thus lose the round. Additionally, there are certain cards that can grant you more points and another card that, if in possession of it by the end, makes you lose automatically. The player with the most points by the end of the game is declared the winner.

There are wooden markers included which can keep score, but they’re not necessary for full enjoyment.

The main gimmick of the game is that all of these cards are face-down, including your own hand, and you’ll have to deduce what types of cards your opponents have. At the beginning, you’re given the opportunity to look at one card before you begin, which means you still need to figure out the rest of your hand. On every turn, you’re given the option to do two actions: peek at one of your cards, shuffle your own hand and then look at one card, switch any card in the game (there’s a variant where you can only switch with one of your cards, but this makes the game less interesting), or declare the game over. The last action can only take place after the fourth turn begins, and you can do any other action twice (e.g. peeking at two cards or switching two cards in a turn). However, the game over action is the only action you can take, so you need to make sure that you don’t need to peek or shuffle before you do this. Once someone declares this, everyone flips over their pile and calculates their scores if they have one of each type of wish in their hand.

A complete set for five players; these can be reduced for less players.
Not pictured: reminder rule cards given to each player.

My playthroughs involved two of my closest friends who don’t really mind me exploiting the rules, so I took advantage of the switching action quite liberally, to one of my friends’ chagrin. Once she thought she knew her hand and could safely proceed with her turn, I took the opportunity to snatch one of her cards with one in the middle pile and with my other friend. It’s these moves that really add to the random and lighthearted nature of 3 Wishes, and I appreciate that it’s a game that you don’t have to take seriously.

Unfortunately, there are quite a few issues that hamper the title. While the art of the cards pairs well with the lighthearted nature of the game, because cards are face-down for most of a playthrough, they don’t get to be seen often. There are cute drawings of talking dogs and invisible people that are charming, so it’s a shame that they’re unseen during most of playtime. Additionally, aside from a few select cards, most of the deck you use is nondescript, with the only main difference in cards being the points they provide and the different power types. One of my friends, after calculating, simply replied, “You could feasibly play this with a regular deck of cards if you tried.” The lack of card variety also means that a lot of strategies depend on luck and chance rather than planning. This would be fine if it wasn’t for the fact that my winning plays revolved around the fact that I shuffled everyone’s cards and ended the game the following turn.

This is what you’re going to be seeing for most of the game.
“Elisha, stop shuffling my cards around!”
-My disgruntled friend

After a few rounds, my friends and I found that there are only a few tried and true ways of playing through the game, since the win condition is a little fuzzy. Due to distribution of cards, whoever can make a winning hand is probably victorious, with point calculation only coming into play once. The game works great in short bursts of two or three rounds, but it’s best to move on after that.

3 Wishes is a quick and fun little card game that pretty much anyone can pick up. While negatively impacted by chance and mechanics, this is a game to play when you’re resting from more complex games or just have a few minutes to kill. Just don’t expect to get too much out of it.

Elisha Deogracias is an aspiring accountant by day, freelance writer by night. Before writing for Gaming Trend, he had a small gig on the now defunct Examiner. When not being a third wheel with his best friends on dates or yearning for some closure on Pushing Daisies, he's busy catching up on shonen manga and wacky rhythm games. Mains R.O.B. in Smash. Still doesn't know if he's a kid or a squid.
Related Articles: 3 Wishes, Tabletop
Share
Tweet
Share
Submit