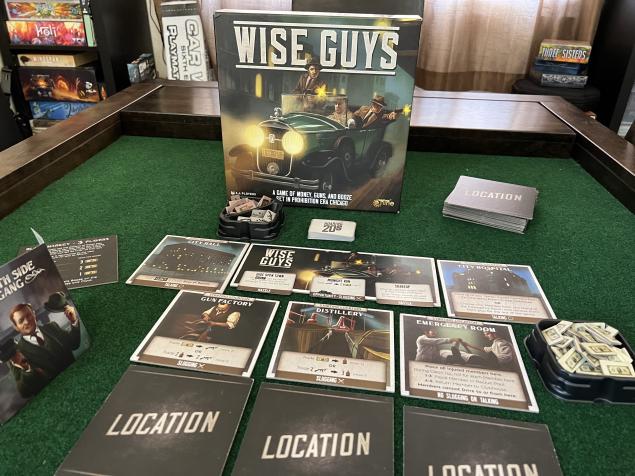 Publishers Gale Force Nine recently released Wise Guys, an unlicensed reimplementation of their sleeper hit Sons of Anarchy: Men of Mayhem. The core gameplay is essentially unchanged; players start rounds collecting orders, which they use to drive their gang to the game’s location tiles, start fights with rival gangs to attempt to clear them out, and eventually exploit any location where they are the only gang present, normally gaining resources or clout. Players also spend orders on their unique gang abilities or upgrading associates to made men, which have much better stats and will give access to additional orders in later rounds. At the end of each of the game’s six rounds, there’s a black market phase, where players can lose clout to sell booze, and gain a nice chunk of change if they sell during one of the markets with little booze sold. Given that the player with the most money at the end of the game wins, you’d be correct if you assumed that the gang that  most successfully manages their clout will usually win, but there’s some secret  sauce on top of this otherwise pretty standard area control game that really makes it sing: players can freely exchange guns, booze or money tokens at any time, adding an interesting wrinkle of negotiation and intimidation that I loved during my plays.

Of course, there are some noticeable changes made for Wise Guys. Plastic has been eliminated  and replaced by cardboard, which a more cynical person would suggest  was a move to cut production costs, but I appreciate the move to more sustainable components. The biggest change, however, is purely mechanical: there are now two types of fights, slugging and talking, with every location being linked to one or the other exclusively.   Additionally, every gang now has an extra level of asymmetry, as made men have varying talking and slugging attributes, and selecting which made man you want access to has strategic bite. 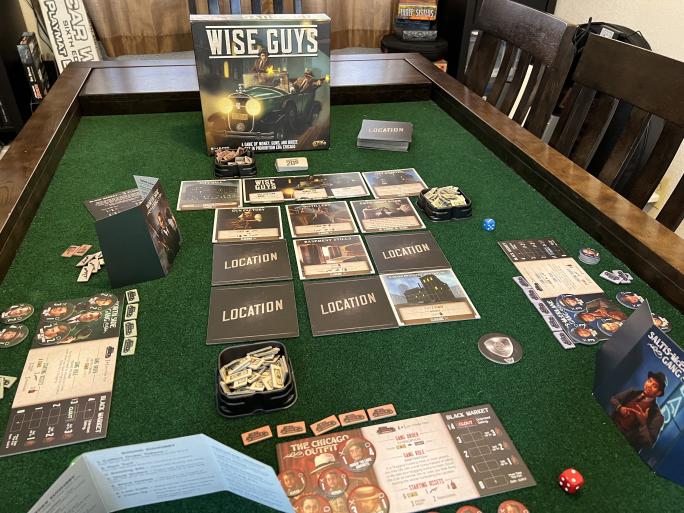 But there is something rotten in the state of Illinois. While the underlying area control and negotiation hybrid game may actually be a design coup, the frills on top tarnish what would otherwise be a masterpiece. There’s definitely other issues I need to call out, but I really think the core issue is how the various factions’ asymmetry was executed. With the standard area control mechanics of moving around the board and fighting (subdivided into two with slugging and talking), and with the addition of clout management and negotiation, I had thought  that there’s plenty of room for every gang to be unique, but instead Al Capone’s gang, the Chicago outfit, gets a unique gang order that just gains them clout,  has a unique rule they can sell that lets them fight on the side of another gang, and is over-statted in speech.  Inarguably, red has too much of the pie, leaving all the other gangs feeling samey, since really all the design space left to give to a gang is slugging, so they’re all good at slugging (except for yellow who just kinda can’t do anything). 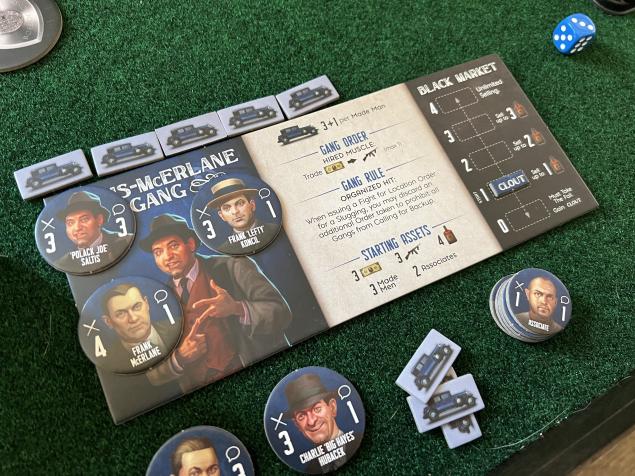 All this is compounded, though, by how talking was implemented. Since  fight types are determined by the location, parts of the board are essentially off-limits for certain gangs once they are contested, since a slugging gang won’t be able to force a talking gang off a talking location.  But it gets worse, since while talking gangs can take guns to a dugout and have a chance, there is no similar mechanic for talking.  Taking into account that all the clout gaining locations are talk fights, it really exacerbates the feeling that the Chicago outfit is pushed to the point where they really have a stranglehold on the game. They have the clout to be bringing guns to slugging fights where they’re outmatched, to be selling booze at every black market, and reap whatever curveball rewards the game’s events, “Roaring 20s” cards, give based on clout, and avoid any punishments for low clout, while also being the only gang that can even consider using the locations that cost clout to exploit. I understand how a lot of these decisions make thematic sense on the surface, but poor implementations of the new ideas in Wise Guys  tank the overall  experience of what could have been a great game. I’m honestly excited for an expansion, because I do feel like these problems could be fixed with some relatively simple tweaks that  are beyond what you can do with the core box.

In what's becoming an unfortunate recurring theme in my reviews of Gale Force Nine games, Wise Guys has a legitimately great game buried under a list of faults that could have been easily fixed with a bit more playtesting. The good to great parts of this game are lifted from the Sons of Anarchy game that came out in 2014, meaning Gale Force Nine had eight years to improve upon it, and instead they just slapped some mechanics on top that actively detract from the game. I know it sounds harsh, but they already had a great game and made it worse over the course of almost a decade, which I don’t need to tell you is just short of an eternity in board gaming terms.

Nick grew up reading fantasy novels and board game rules for fun, so he accepted he was a dork at an early age. When he's not busy researching the intricacies of a hobby he'll never pick up, Nick can be caught attempting to either cook or befriend local crows.
Related Articles: Tabletop, Wise Guys
Share
Tweet
Share
Submit