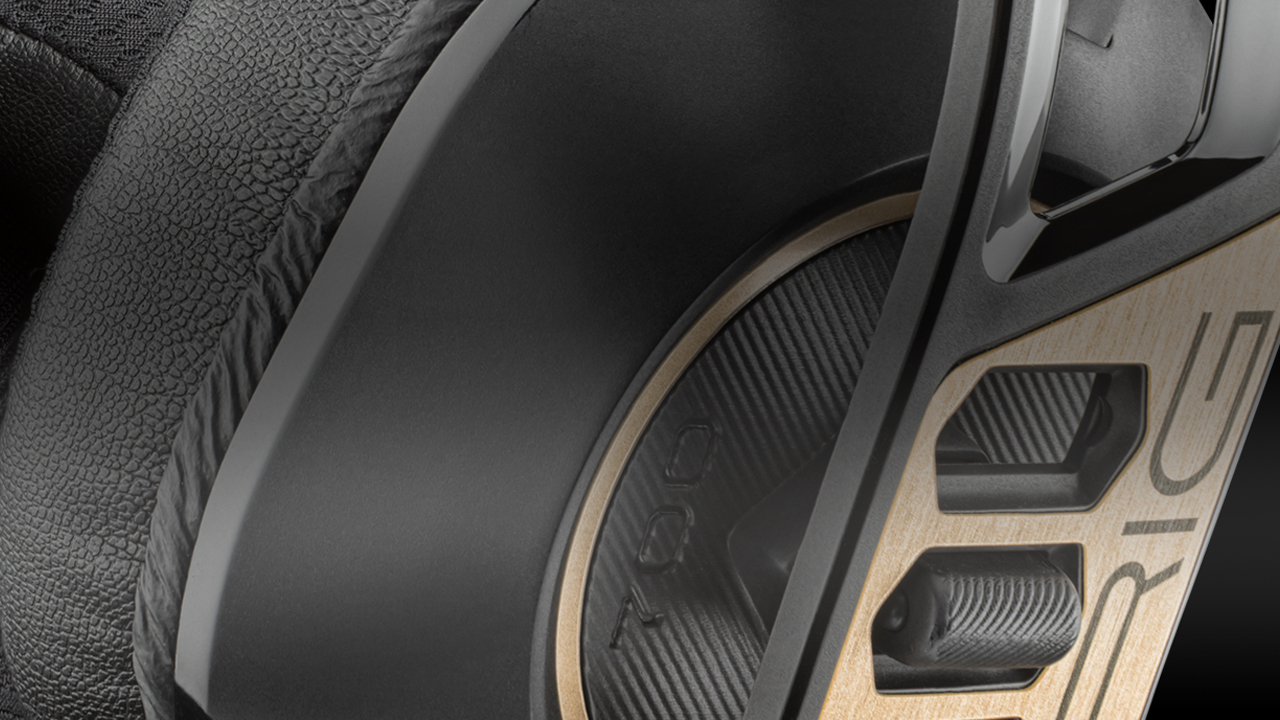 If you work in the corporate world and asked “Who makes the highest quality headsets” the answer is always the same — Plantronics. If you work in the gaming space, you might get a variety of answers. Well, Plantronics has been working diligently over the last few years to break into the latter, and with their recently-released Rig 700 HD headset, I think they just might have cracked the case.

The Rig 700 isn’t the first foray into the gaming market, not by a long shot. The Rig 800 XL hit the streets in 2017, with the Rig 300, 400, and 500 filling various price and feature niches in the market over the last few years. Having used the Rig myself for a time, I liked the quality of the mid-range headsets they released like the 500 Pro, but wasn’t a huge fan of the aesthetics or the comfort. This caused me to skip the 800 XL entirely, so I was interested to see where this newest headset would fit. Let’s unbox the headset and get started.

Right out of the gate I was immediately impressed with just how incredibly lightweight the Rig 700 HD is. Since I have a variety of headsets, I put their claim of being “one of the lightest headsets on the market” to the test and compared it to the Turtle Beach Elite Atlas, the Turtle Beach Recon Spark, and the Astro A50. In order of weight we have the Elite Atlas at 13.3oz, the Astro A50 weighing 12.7oz, Recon Spark at a svelte 8.7oz, and finally the Rig 700 HD at just 8.5oz. For comparison, an Xbox One controller weighs 9.9oz.

The reason I’m putting such a heavy emphasis (enjoy the pun) on weight is that it is the largest contributing factor for long gaming sessions. Heavier headsets will ride on the top of your ears (the helix), eventually putting pressure on the portion of your ear that connects to your head. This can cause your ears to hurt as this puts pressure on the cartilage of the ear canal. While we all may appreciate the extra armor a metal headband or swivel arms on a headset may bring, those things also bring extra weight and bulk to the table. 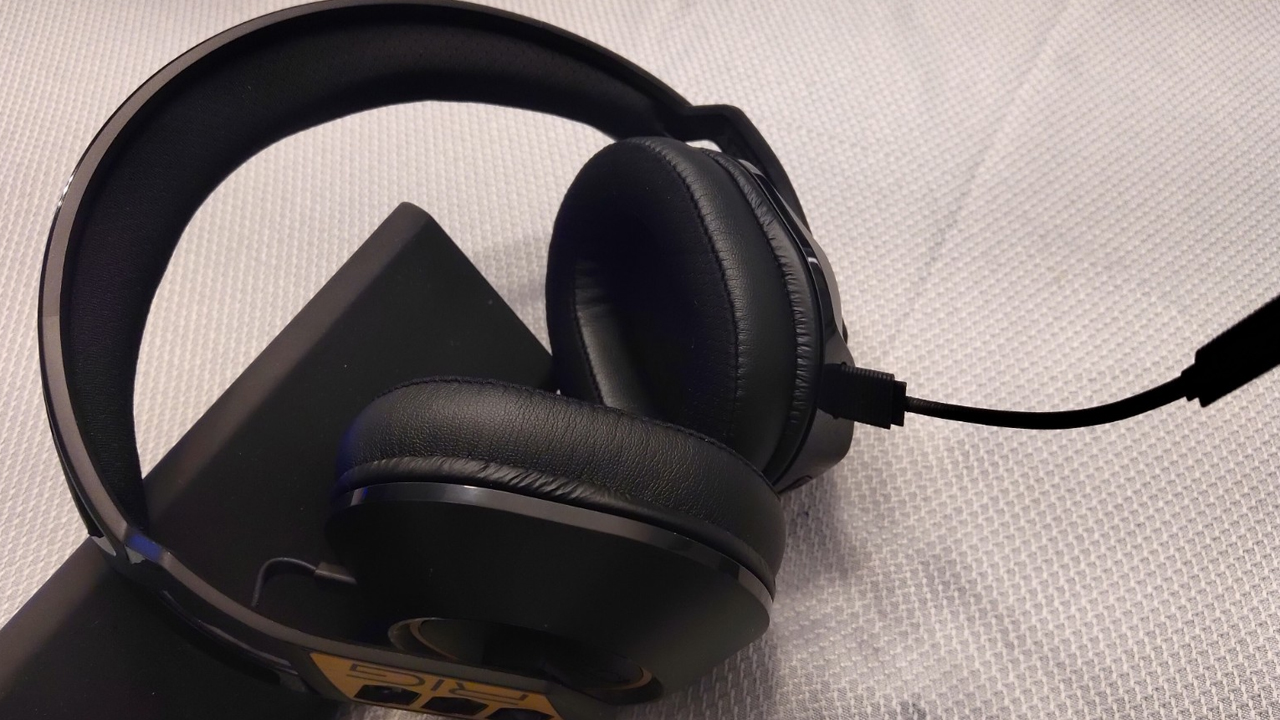 To be frank, the best implementation I’ve seen for adjustability comes on the Astro A50 with its notched gradient adjustment bars, but that headset is over double the price of the Rig 700 HD, so it’s hardly a fair comparison. To help with the overall “fit” of this newest headset, Plantronics did something I’ve never seen anywhere else. Rather than an adjustable slider that can move, they’ve instead provided three notches for the ear cups, allowing you to solidly place them where they may fit your head best. We tried this out in the best way possible with me using the lower notch for my comfort level, my wife using the middle, and Holly’s 5 year old son Gavin able to wear the headset on the highest notch. If you’ve ever watched a 5 year old play a game, spinning around and hopping up and down, knowing that the headset will stay on his noggin is a good thing.

Checking out the buttons on the Rig 700 HD, a mute button resides at the very bottom of the left cup. This is the best placement as there is no chance of accidentally hitting the wrong button amidst the other adjustables. Just above that lies the micro-USB charge port. It’d be nice to see the industry move towards USB-C and Quickcharge 2.0 as everything else seems to be — maybe next time. Further up the left ear cup is the digital dial for sound. Rather than having a top and bottom, you simply scroll it until you are comfortable, and an audible notification will tell you when you’ve maxed it out. Above this is the only other depressible button on the headset — the power and pairing button — more on this feature later. Above this is the final dial on the headset — the aforementioned audio mix dial. This dial is the secret sauce of the Rig 700 HD. 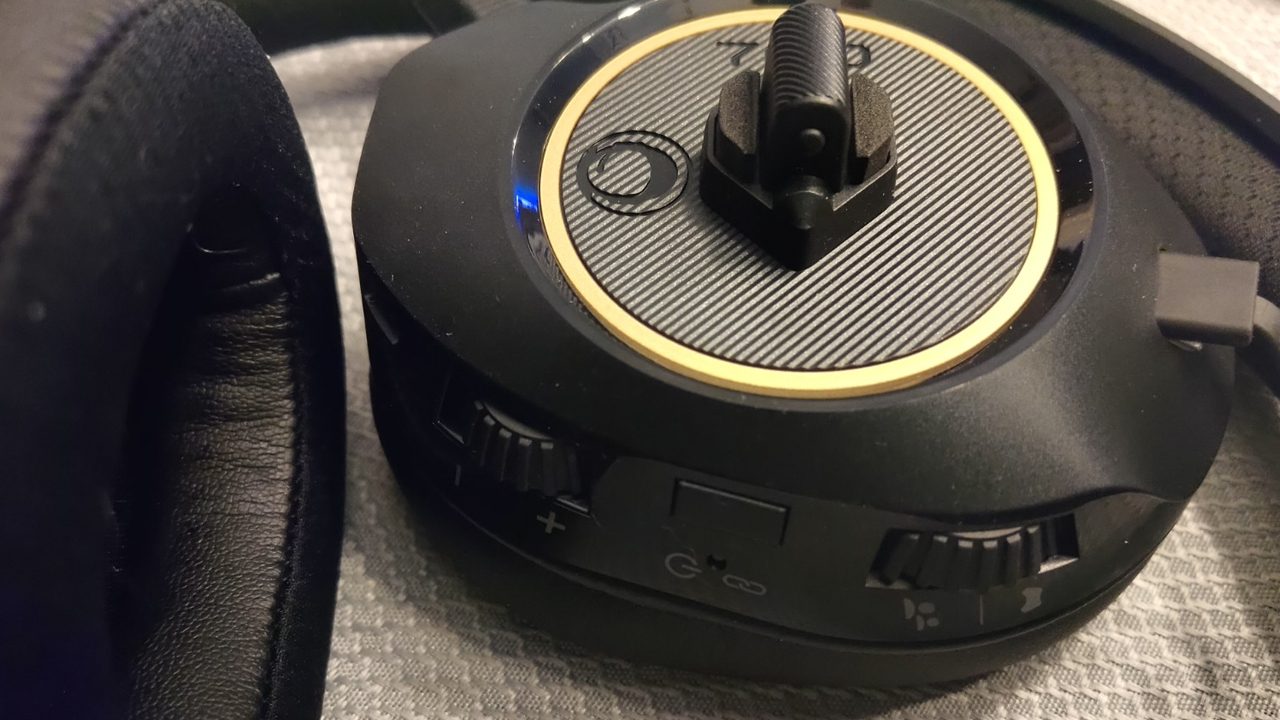 I’ve detached the headset and you can see all of the dials and buttons.

Audio Mix isn’t something new for headsets, but the Rig 700 HD is the only wireless headset I’ve used that has one. With a physical min and max hard stop, this dial lets you adjust the balance of chat and in-game sound. With a physical knob on the rear of the left ear cup I was able to adjust the balance of my session against my own voice. This is great for streaming as I can ensure I’m being heard clearly, but also that I’m able to hear what’s going on in-game. Having a digital wheel that I can adjust without software or having to alt-tab out of my game is a convenience I didn’t know I needed, but now that I have it, I’m not sure I’d want to live without it.

The 40mm drivers in this headset can really put out some amazing audio. With solid but not overwhelming bass, listening at 50% volume was very comfortable, with 100% being somewhat overpowering. Using a handful of tracks (e.g. The Who’s “Baba O’ Riley”, Daft Punk’s “Get Lucky”, Harold Faltermeyer’s “Axel F”, and of course “The Imperial March” from John Williams) I was able to really test the lows, highs, and midrange of the Rig 700 HD, and I’m happy to report that this headset delivered on every front but one. At max volume there was the slightest bit of distortion, but to be honest, that level is so damned loud that it’s beyond the usable range anyway. 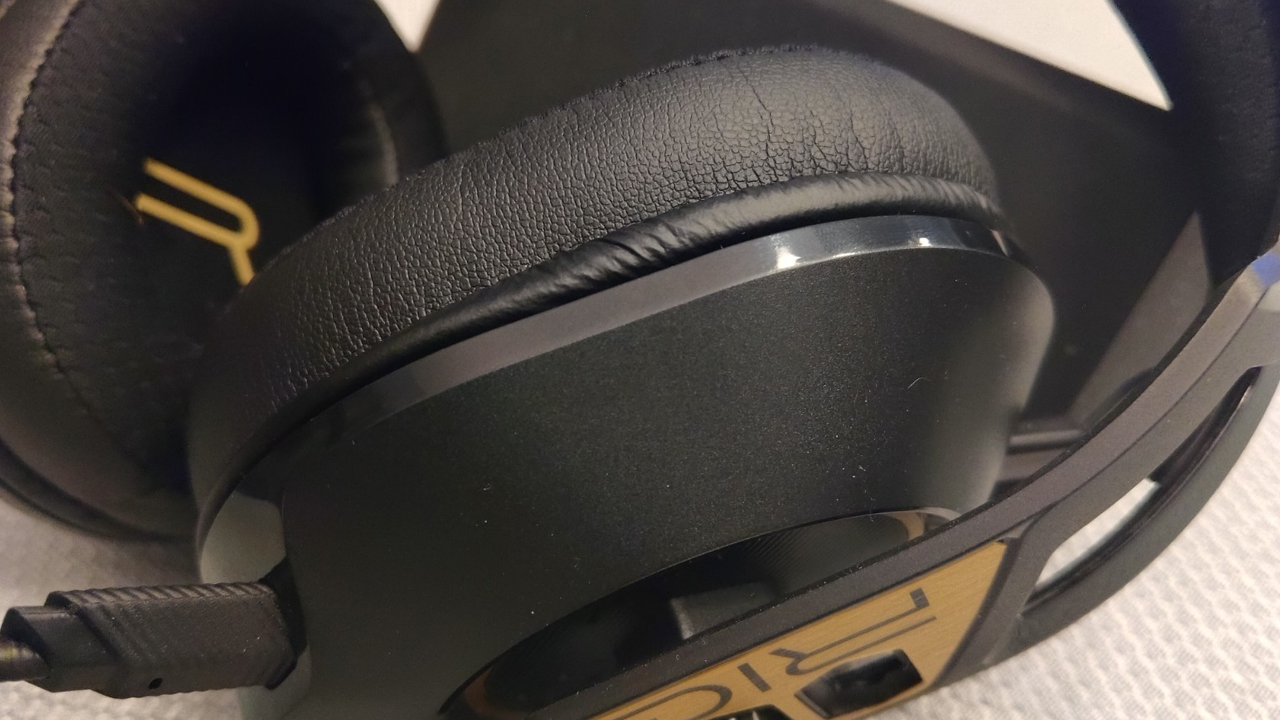 The ear cups are soft, light, and comfortable

As a matter of convenience, the Rig 700 HD also features a removable microphone boom. The boom is slightly longer than we saw on the 800 series, which makes for cleaner voice capture. There is one physical feature that I’d have liked to see in this headset — swivel arms. High end headphones often feature the ability to turn the ear cups perpendicular to the body of the headset, allowing them to comfortably rest on your collar instead of around your neck. This is, of course, a personal preference, so you’ll have to decide if it’s your cup of tea.

I did run into one odd cosmetic bug when I was testing the Rig 700 HD — it’s detected by Windows 10 as a Rig 800 HD. It doesn’t affect the device in any way, but it’s just a thing I noticed when firing up the wireless dongle for the first time.

The primary thing that attracted me to the Rig 700 HD, beyond the 12 hour battery life and light chassis was the ability to use it with my various consoles, as well as my PC. Again, by way of comparison, the Astro 50 at three times the price comes in two variants — one for PC and Xbox, and one for PC and PS4. The Rig 700 HD is capable of working with both the Xbox One, the PlayStation 4, and the PC, and the only thing necessary to rapidly move them between that trio was moving the wireless receiver. I opted for a second receiver that I moved between the consoles, leaving one headset receiver plugged into the PC at all times. In practice, it was as simple as long-pressing the mute button to pair the headset with whatever device I wanted to use, meaning I could easily move between PC and console with the press of a button. 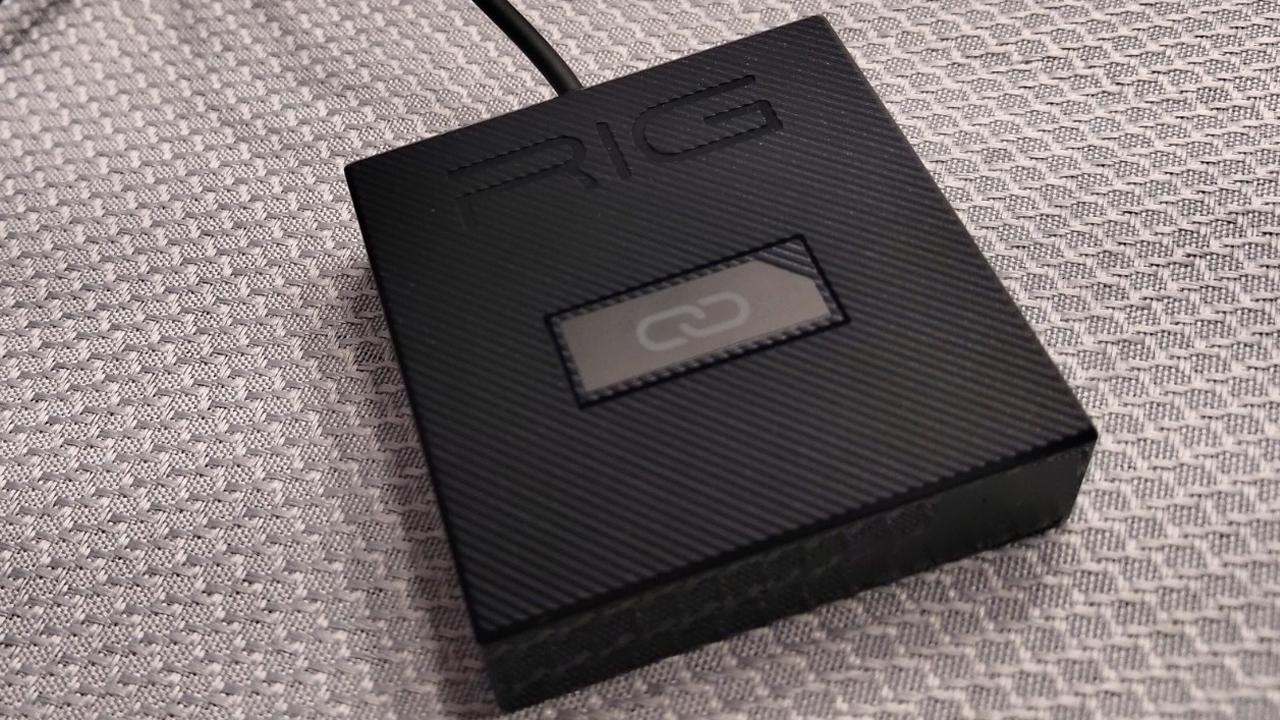 The secret sauce of the wireless. It’s a simple button press to pair it, and it does it in about two seconds.

For fun, I decided to try this on the Nintendo Switch, even though Plantronics doesn’t advertise compatibility with that platform. The receiver is a USB device, the Switch dock has USB ports, so I figured why not? Well, I’m happy to report that Plantronics needs to update their packaging — with zero effort whatsoever, and no special gymnastics to make it work, the Rig 700 HD works perfectly. In fact, it picks up the microphone as well. I’m not going to bother braving Nintendo’s near complete lack of online support, but blowing on the mic picked up the sound, so I imagine that it’d work in-game. If Nintendo can sort out their online strategy, it looks like the Rig 700 could do the trick.

The Rig 700 delivers on nearly every promise they make on the back of the box, and even a few more. It represents the only wireless headset I’ve found that I can use on every platform I use for gaming, whether that’s PC, Xbox One, PlayStation 4, and even (unofficially) the Nintendo Switch. Crisp and clear sound coupled with clean microphone pickup makes this mid-range headset an excellent choice for any setting.

Ron Burke is the Editor in Chief for Gaming Trend. Currently living in Fort Worth, Texas, Ron is an old-school gamer who enjoys CRPGs, action/adventure, platformers, music games, and has recently gotten into tabletop gaming. Ron is also a fourth degree black belt, with a Master's rank in Matsumura Seito Shōrin-ryū, Moo Duk Kwan Tang Soo Do, Universal Tang Soo Do Alliance, and International Tang Soo Do Federation. He also holds ranks in several other styles in his search to be a well-rounded fighter. Ron has been married to Gaming Trend Editor, Laura Burke, for 21 years. They have three dogs - Pazuzu (Irish Terrier), Atë, and Calliope (both Australian Kelpie/Pit Bull mixes).
Related Articles: Hardware, Rig 700 HD Wireless Headphones
Share
Tweet
Share
Submit