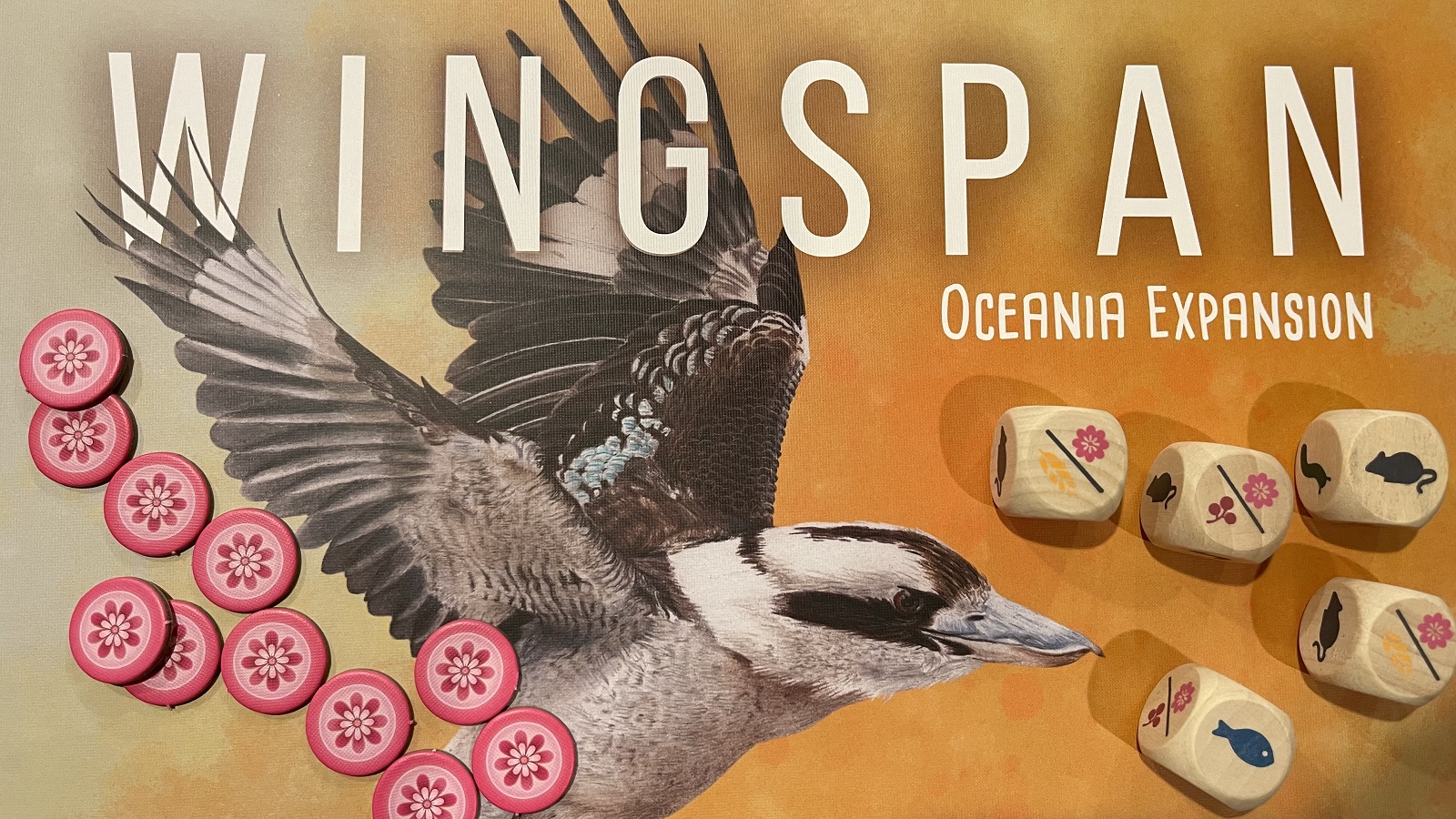 The Oceania Expansion for Wingspan is the second expansion for the game and the first to introduce new mechanisms. As the title indicates, this expansion brings birds from Australia, New Zealand, and that region of the Pacific. These are colorful and interesting birds with vibrant art and fascinating facts. These newest birds include some that rely on the new resource introduced in the expansion – nectar. I rated the Wingspan base game a 90%, (read the review here) with only a few quibbles. I’m happy to say that the new additions to the game in this expansion improve the game play while expanding the fun.

The expansion box, which is different in dimensions than both the original and the previous expansion, is surprisingly heavy and includes a bunch of fun new stuff. There are five new player boards, nectar tokens, five new dice, new eggs, new bonus cards, new goal tiles, new Automa cards, and ninety five new bird cards. The wooden dice differ slightly from the original set with two additional nectar pips added to them, one on a seed face and one on a fruit face. The new egg miniatures are yellow bringing a new color to the egg pile. The goal tiles are double-sided and offer interesting new objectives. The five new player boards have new actions on them, some places that deal with the new nectar resource and new artwork. The artwork is darker as well – I liked it, but others thought it made the boards a bit more difficult to read. The additional cards have new birds and some new mechanisms on them including birds that use the nectar resource. While the new cards, eggs, nectar, and goal tiles are added to the game, the new dice and player boards replace the originals. The components for the Oceania expansion are identical in quality to the original game. 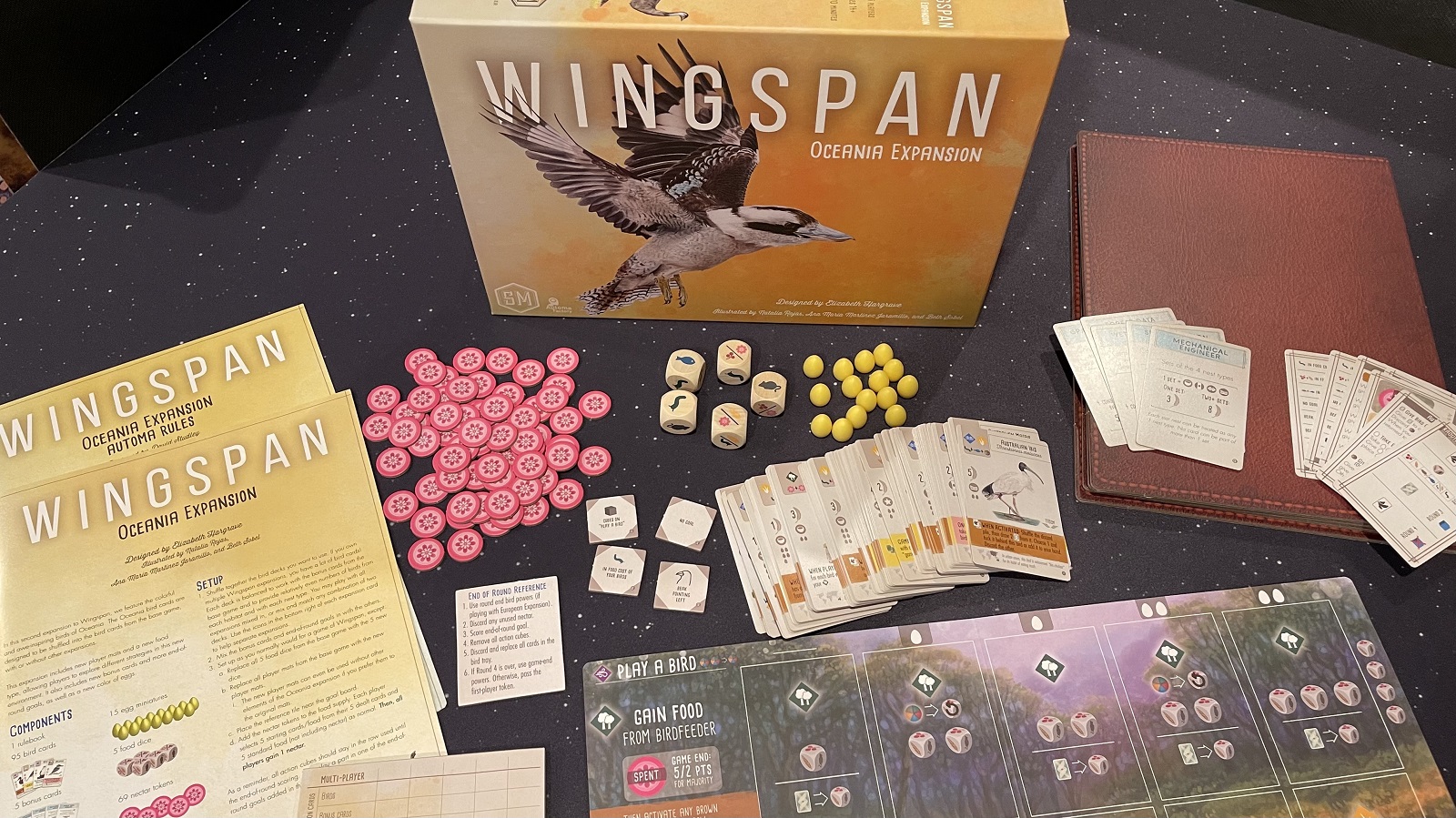 Everything in the Oceania box.

The new player boards shuffle around some of the options, increasing the flexibility players have each turn to swap out eggs, food, and cards for… eggs, food, and cards. There are two new actions available too, in the forest and wetlands. The forest action allows players to trade a food to reset the birdfeeder (reroll all five dice into the birdfeeder), and the wetlands action lets you reset the card trade. Finally, the boards include new spaces on the left side to place spent nectar throughout the game. At the end of the game, the two players that spent the most nectar in each row will earn points. Mechanically, the changes to the actions available on the boards increases the flexibility and options for players. For frequent players, the changes might take a game or two to get used to, but overall, they gave players more options to manipulate resources to accomplish the goals they want.

But that’s not the only change that increases flexibility. The addition of nectar brings a whole new aspect to the game play. While nectar is required for a few birds, it primarily acts as a wild card when it comes to food. Nectar can be substituted for any food to play a bird, use an “any food” bird power, or upgrade an action. The only time it doesn’t work is to pay a bird power that requires a specific type of food. This powerful resource makes it easier for players to play those birds that require three food. With the addition of nectar, players can expect to get their hands on food they need more often. Adding in the end of game score for spending more nectar and players are going to go for this resource. Nectar does have a downside – it vanishes back into the main food supply at the end of the round if it hasn’t been spent or cached on a bird. Crafty players may try to trade away a nectar and another food for some other food back, but you can’t do that. So you have to spend it on a bird, a power, or an upgrade, or lose it. 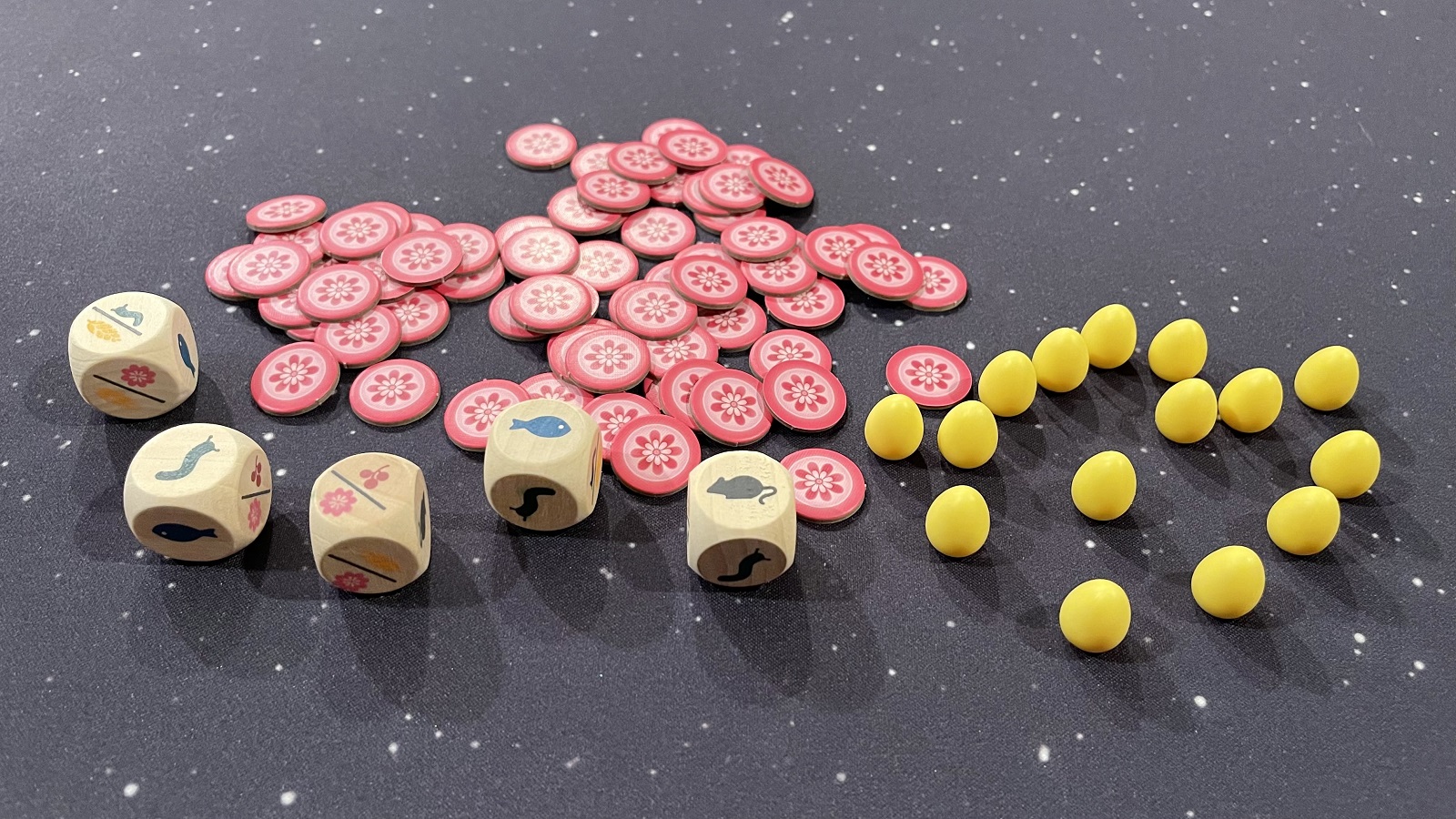 To change up scoring, in addition to the nectar scoring spaces on the player boards, three of the new bonus cards look for birds in a row with ascending or descending wingspans. If you can get five in a row that have wingspans that ascend or descend you can earn eight points. New end of round goals include “no goal” which is exactly what you think, and “beak pointing left” or “beak pointing right”. The pointing beaks are based on the bird illustrations, and the rules include a list of birds that it’s unclear if they are pointing left, right, or center. All the additional scoring features fit smoothly into the game and having a score based on the illustration is a nice new feature. It encourages players to review the pictures in a little more detail. Some players weren’t too happy with the “no goal” tile, finding it reduced the focus of the round, but others liked the freedom to not have to compete for points and focus on other things for a round. 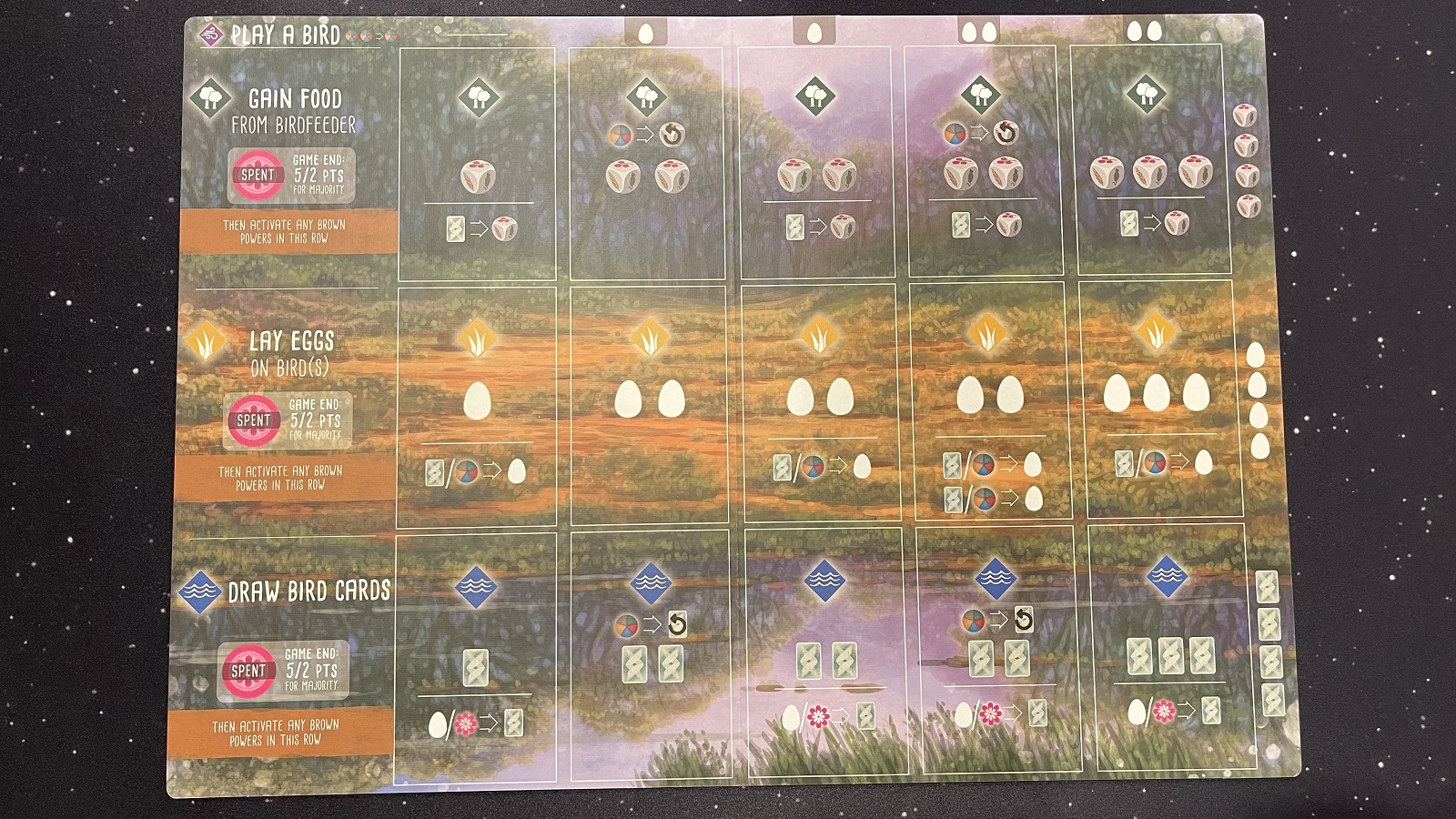 All of these changes and additions come with a big pile of bird cards to add to the deck. The new birds include a new type – flightless birds. There are five flightless birds in the new deck including the kiwi, emu, and a penguin. Any flightless bird in the deck has an asterisk for a wingspan, and is treated as a wild for effects that rely on wingspan. So if you happen to find one at the right time, a flightless bird can help in scoring the ascending and descending wingspan bonus cards. The new cards also add a new power, colored yellow, which activate only once at the end of the game. Helpfully titled “GAME END”, these powers allow players to gain additional points at the last minute. Some of the new bird powers rely on adjacent birds, which are orthogonally adjacent (above, below, left, and right), so there are plenty of new things to think about when these birds pop up in the tray. Sixteen nectar eaters, five flightless birds, over a dozen end of game powers, and a smattering of adjacency powers make these birds a fun bunch. Adding to that their beautiful illustrations and interesting tidbits, these cards are a nice addition to the pile. I found out some interesting facts and enjoyed reading about new birds that I’d never even heard of. I had no idea that there is an endangered, nocturnal, flightless parrot until it appeared in the tray. 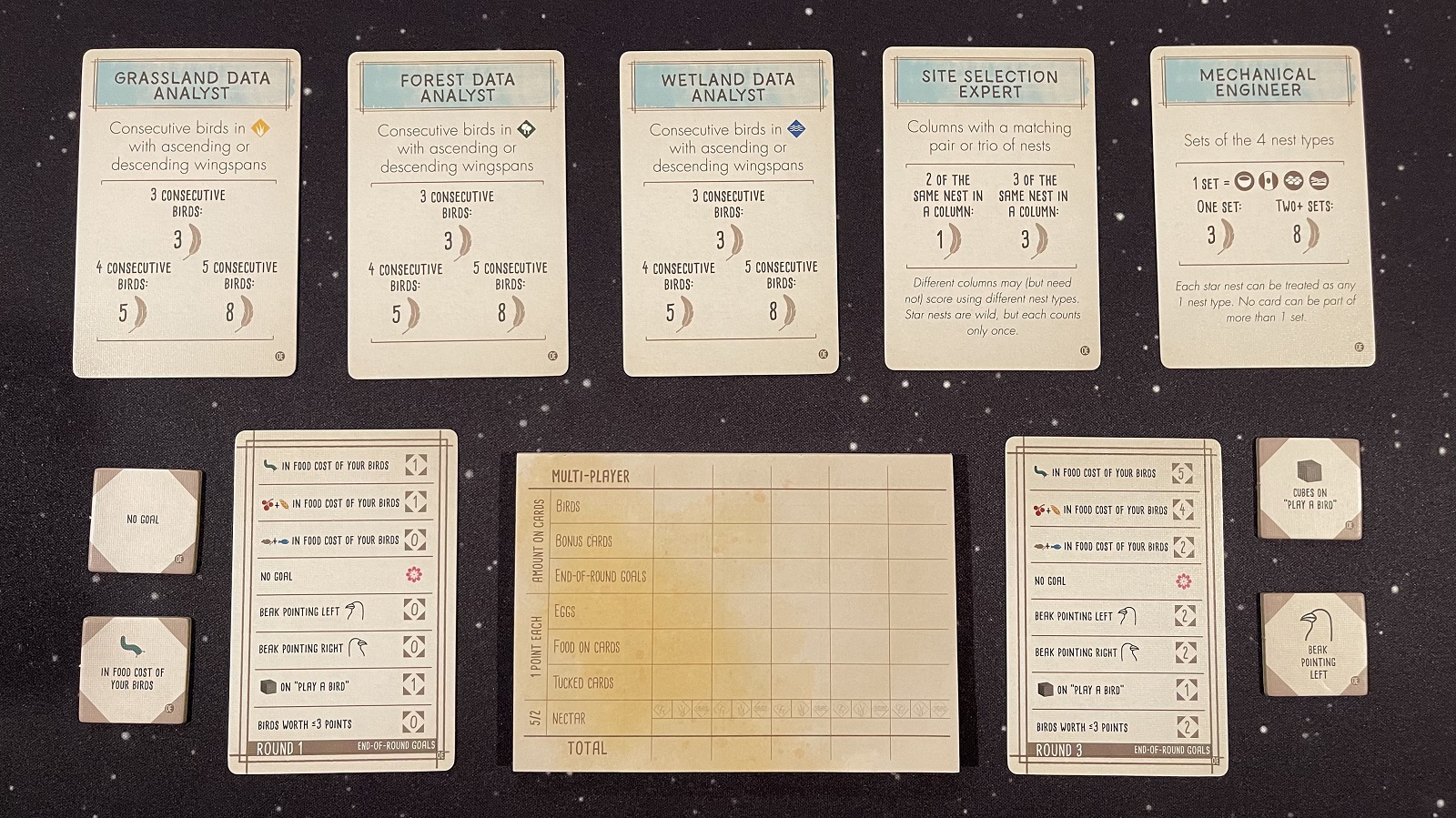 If you want, you can use just the new player boards, eggs, scoring tiles, and bonus cards, but the nectar and additional cards kind of go hand in hand. If you add the nectar to your game, you might as well add in the cards, and adding the cards to your deck requires the use of nectar because it is a food resource for some of the birds. So, if you aren’t keen on the nectar, then you won’t want to use it or the cards. Because of the scoring ratios, you will need to add the whole pile of cards, I imagine it could throw off scoring if you pull out the nectar dependent birds. Adding the nectar increases the flexibility players have, but it also adds a layer of complication to the game that might be off-putting to some newcomers. I can see people wanting to teach the game without nectar then adding it in for later games. This is possible, because the expansion cards are marked, but you will have to shuffle through a couple hundred cards to dig out the Oceania ones to set up the game without nectar. As far as number of cards, if this is the only expansion you add, they’ll make up about a third of the deck, if you also use the European expansion, they’ll make a quarter of your birds. I played a game with only the Oceania birds to get a feel for it, then added them into my main deck with the other expansion. We saw enough of the new birds to make it worthwhile.

When it came to the base game, one of the critiques I had was the lack of player interaction. This expansion addresses that to a certain extent by including new powers that affect other players; sometimes all other players, sometimes you choose. This helps make things feel a little more interactive. Since the effects are beneficial (for example, you and a player you choose gain one food) players tended to pick the player that appeared to be doing the worst. This has a side effect of giving someone that isn’t doing as well as they’d like a little boost here and there. It probably makes the game a little closer when it comes to final scoring. So, it’s not quite like multiplayer-solitaire with this expansion. 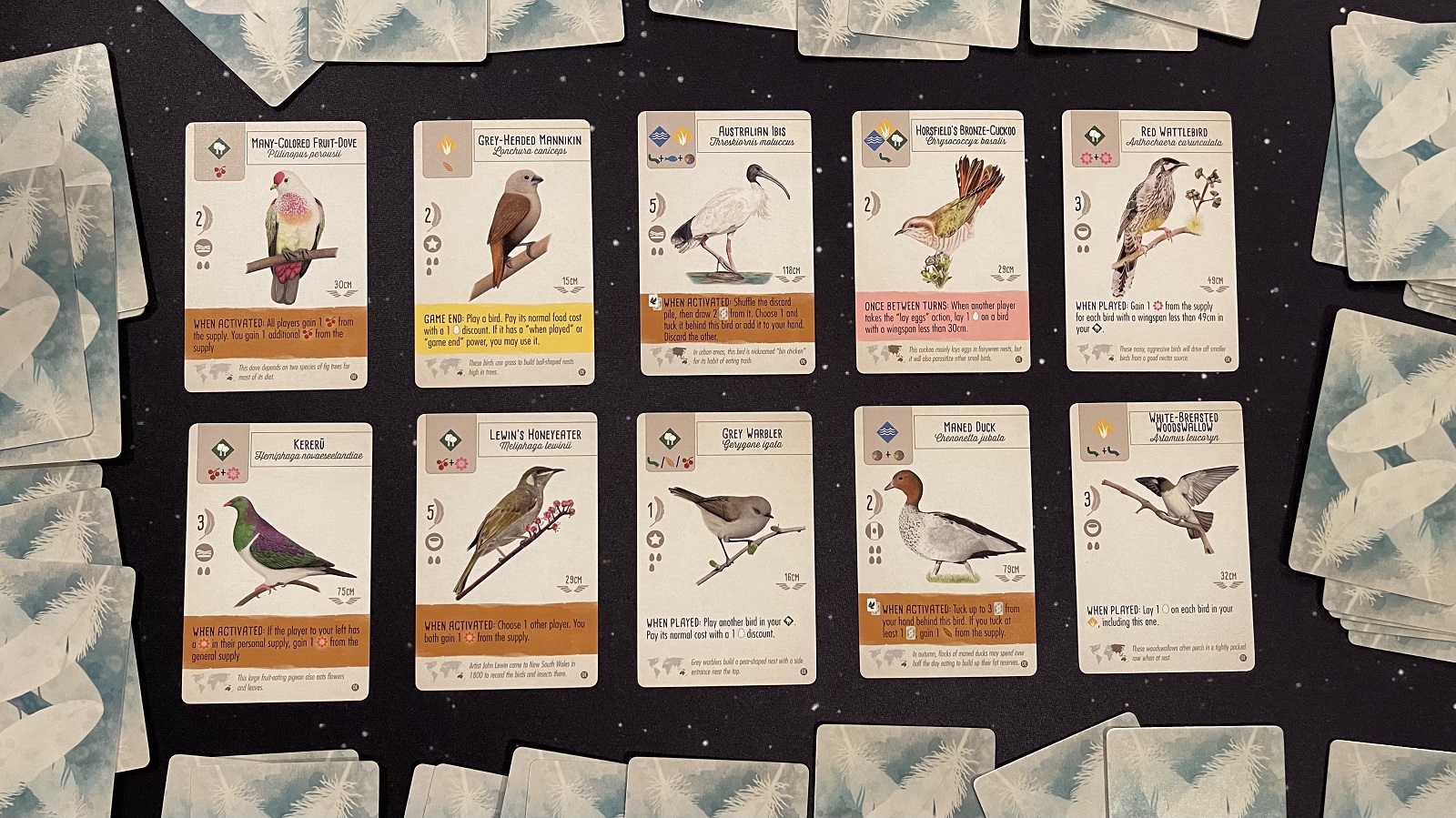 A sample of the new birds.

The Automa gets an update in this expansion as well. There are necessary tweaks to the rules to account for nectar and new dice, but there are also two new variants. One, called Automa’s Hoard, increases the Automa’s resources based on the cards that affect other players. The second variant, called Automarazzi, pits two to four players against the Automa. Automarazzi essentially plays like a cooperative game. One quick run through against the Automa Hoard showed it played well.

The addition of nectar brings a new flexibility to the game that gives players more options. Adding the new player boards to the mix gave the game a boost that I liked. I felt like I could make more things happen and that I could give myself more options by resetting the resource pools. It was unclear to me if the changes affected end-game scoring much, but the play experience itself was improved. Future expansions can add more nectar feeders and flightless birds. I am thinking here about the hummingbirds and penguins of the Americas or the ostrich and penguins of Africa. I’ll be looking forward to getting my hands on future expansions that reveal even more birds that I don’t know about.

The Oceania expansion to Wingspan brings a lot of fun new content to the game. The addition of nectar, while complicating things slightly, overall adds flexibility to the game. Nectar also allows for the addition of nectar eaters to the new bird cards, which, along with their new powers, change the game for the better. The player boards benefit the game as well, by allowing players to reset the feeder or card tray to get rid of unwanted cards. The added complication of nectar may be a bit much for new players. It's a worthwhile expansion that everyone should add to their Wingspan collection.

Steven spends his days working deep in the bowels of a government building and evenings with his wife and daughter. He spent the last quarter century working in and around the US military. His passion is tabletop games. You can catch him playing, talking, reading and writing about RPGs, wargames, board games, party games and card games. Steven is from Texas, but currently lives in Virginia.
Related Articles: Tabletop, Wingspan
Share
Tweet
Share
Submit