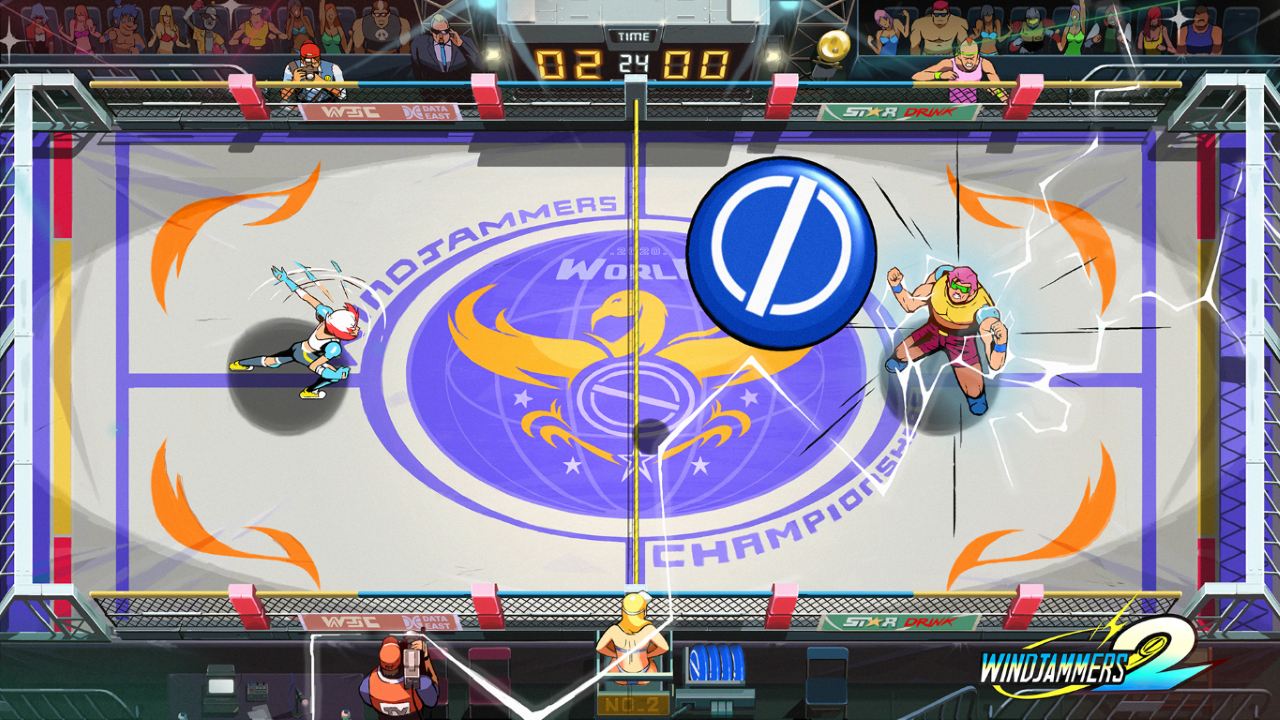 Windjammers 2 is the sequel to Data East’s 1994 arcade sports game Windjammers. After almost three decades, Dotemu has released the game’s sequel after putting it through some vigorous beta testing and launching a demo. Now that I’ve had the chance to play it for myself, I can say the wait was mostly worth it.

As a sequel to a niche yet beloved arcade game, Windjammers 2 wears its inspiration and roots on its sleeve. The first thing I noticed about the game is its impressive and attractive visuals. The game sports heavily detailed, hand drawn, cartoony character designs with both old and new characters having unique looks designed in different shapes and sizes, with backgrounds that remind me of old 70s cartoons. The animations are also crisp and fluid, with no stuttering or lag whatsoever.

Gameplay-wise, Windjammers 2 is a top-down sports game which I can only describe as a mix of tennis and ultimate frisbee where players choose a character in the ten-character roster comprising both new and old characters from the previous game. The aim of the game is to score points by throwing the frisbee over the net at the opponent’s goal post, and whoever gets fifteen points first wins the match. Additionally, some characters have advantages over the others. Some characters have more control, while others are much faster. 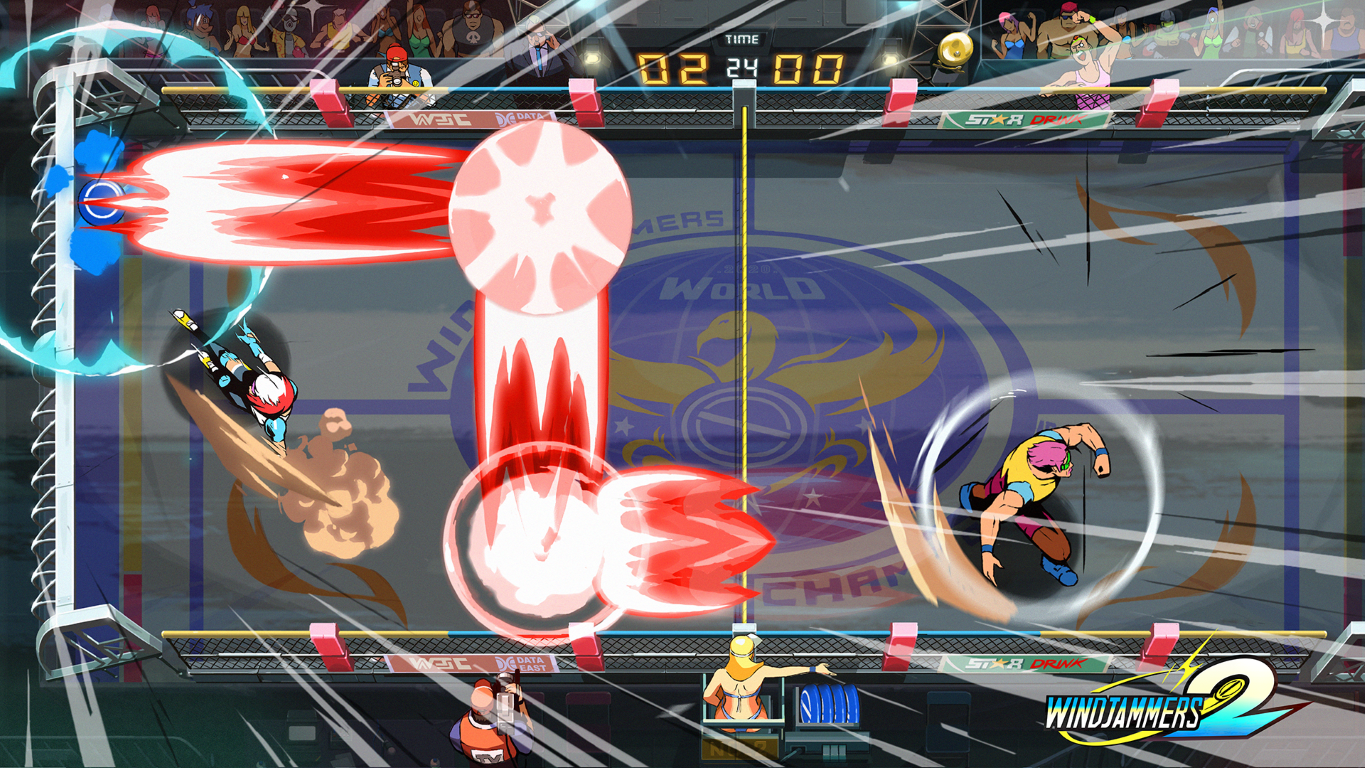 The game also includes several colorful and dynamic stages with gameplay functions. For example, some stages will net you more points if your opponent misses a frisbee and vice versa, while others have different goal posts placements which nets you more points per goal.

Windjammers 2 also features all-new moves along with its new visuals. Players can use a variety of charge shots, drop shots, quick shots, curved shots, and unique EX moves, which serve as the game’s ultimate throws. However, knowing what moves to use is different from learning when to use them. Perhaps due to its arcadey roots, Windjammers 2 can be quite challenging. As such, you’ll need to use a mixture of moves depending on the situation in each match. This means players will need to always be on their toes, as the AI opponents will always be on the attack and have incredible reaction time. It always seems to know exactly where and how to throw the frisbee to overwhelm you and the perfect time to use its special moves.

However, while the game provides a good bit of challenge, it also has some balancing issues. For example, I noticed the frisbee teleporting to the character’s hands multiple times even after it had already fallen on the floor and the opponent character blocking the frisbee after it’s already entered the post. It’s quite hard to distinguish whether these are technical or balance issues as they mostly only show up when playing on the Hard and Medium difficulty settings. 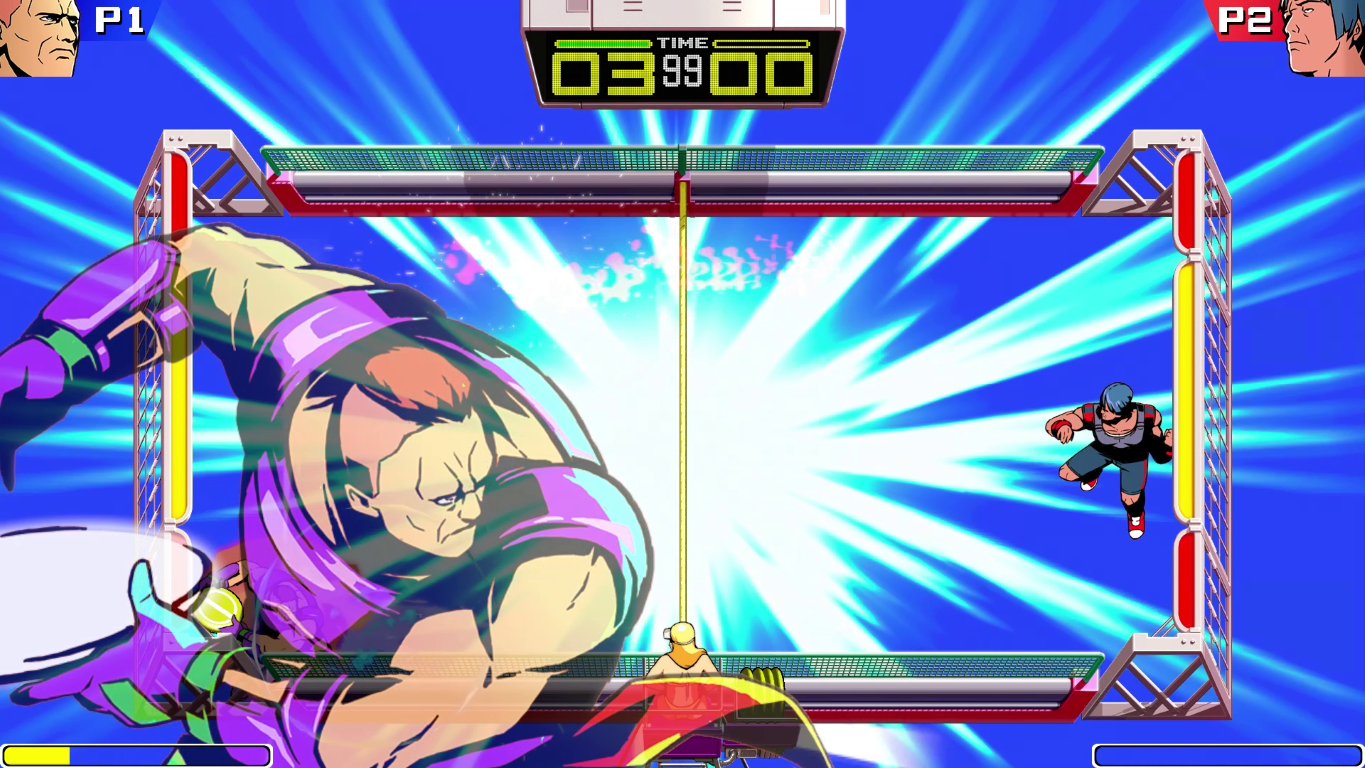 Outside the Versus and Online modes, players will spend a considerable amount of time in the Arcade mode, which the devs seemingly put the most detail into. In this mode, players will select their favorite character to challenge the other characters in the Windjammers Tournament. Players can choose one of two challengers to play against in each stage before moving on to the next. To keep in theme with the game’s difficulty, players will also only have two chances (which the game notes as credits) to beat the Arcade mode. This means if you lose to an opponent twice or two opponents once, you’ll have to start over from the beginning.

It’s not all bad, though, as those who get far in the Arcade mode get access to bonus stages and challenges. However, my main issue with this mode, and frankly with the game in total, is that there isn’t any sort of narrative. You won’t see any character stories being told and will see barely any dialogue in the whole game, which, while not crucial for a game like this per se, is still a shame as it gave me no other reason to continue playing the game after playing through each mode. It’s also worth mentioning that the game doesn’t have a lot of content as the three aforementioned modes and ten characters are all you’ll get at least for the time being. 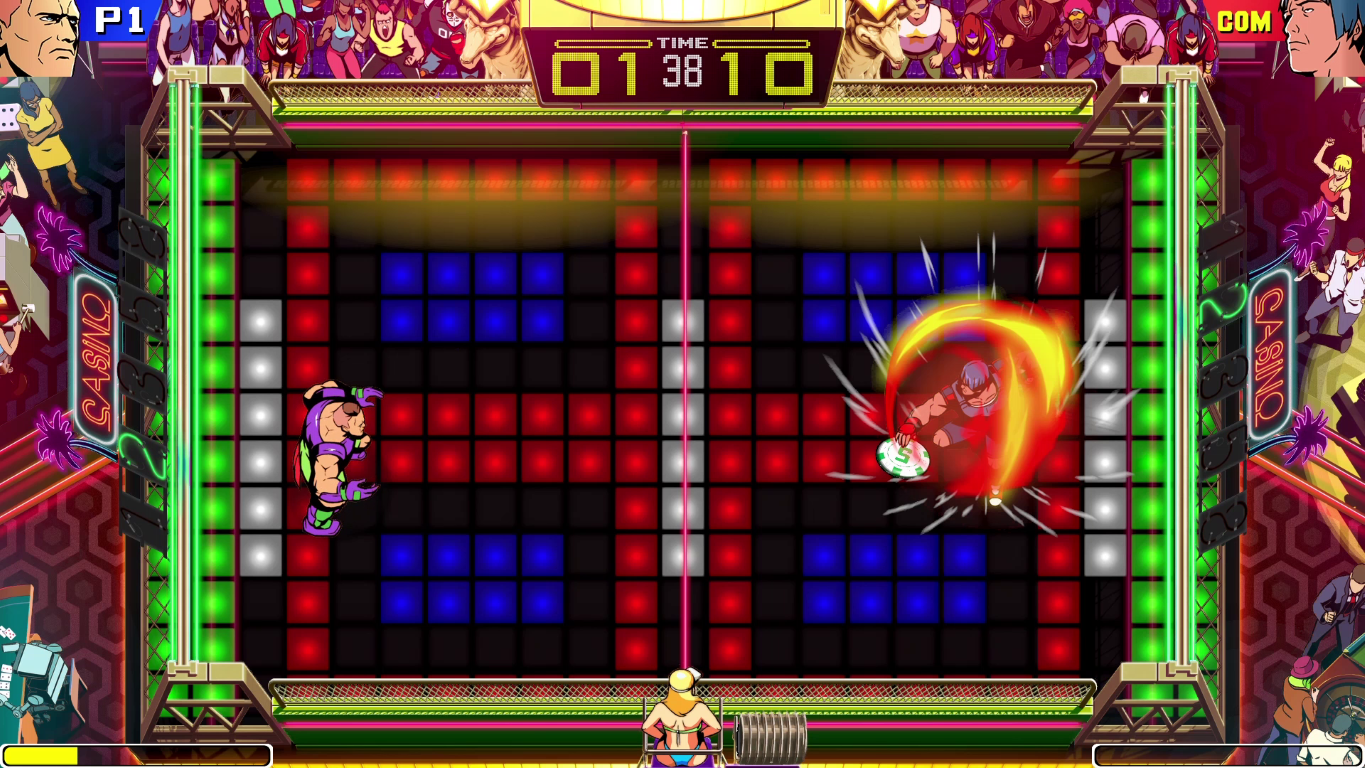 All in all, Windjammers 2 is a great-looking, highly challenging, and mostly functional game. While its difficulty curve can be intimidating to new players, especially solo players, playing with a friend on the couch or through the internet will provide a fairly enjoyable experience.

Windjammers 2 is a great-looking, highly challenging, and mostly functional game. While its difficulty curve can be intimidating to new players, it still provides an all-round enjoyable experience.

Abdul Saad is an avid gamer and computer geek. He's been writing for four years on news, reviews, previews, and more on multiple gaming sites. When he isn't writing or playing the latest JRPG, he can be found coding games of his own or tinkering with something electrical.
Related Articles: Windjammers 2
Share
Tweet
Share
Submit