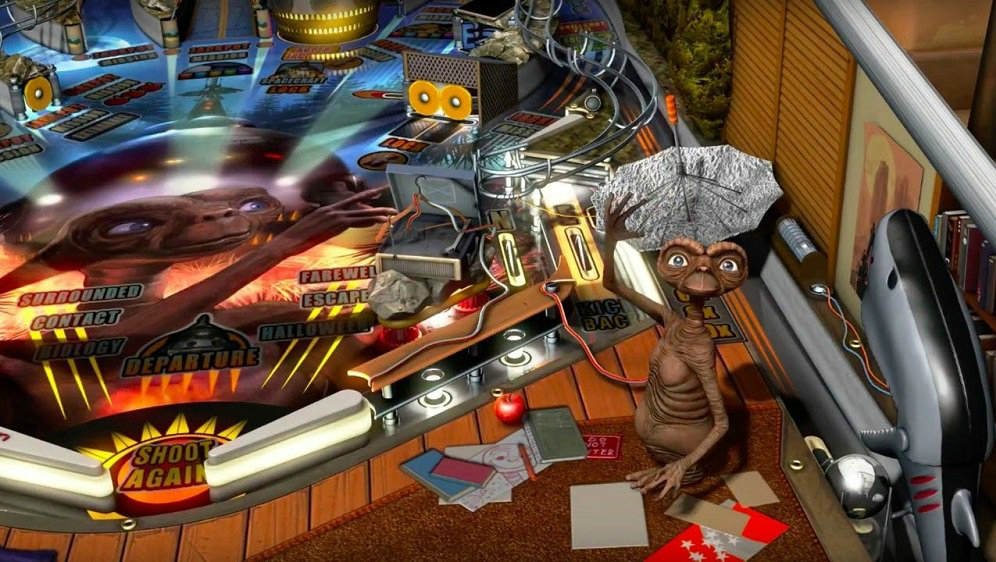 Zen Studios has been in the pinball game for many years now, and I’ve always enjoyed the fun and active tables they have released. Now on their 3rd iteration of the Pinball FX series, the consistency and expected quality is still present, but a question still remains: Will I want to play this game more than occasionally? There are some incredibly fancy features in the pinball tables they provide, but will that keep me returning for more?

Pinball FX3 is doing all it can to solve that problem, and has added some really fun game modes for single player and expanded its online play options greatly. Competition is no longer relegated to an asymmetrical leaderboard, and the different modes of play give the game more fun options to compete locally and also get some much needed practice in.

Along with the new release of Pinball FX3, I was given the chance to check out three Universal Studios themed tables: one each for Back to the Future, E.T. and Jaws. It was nice for the studio to provide the new tables to get a chance to play, but it is even nicer that Pinball FX3 is backwards compatible with both previous releases, giving me even more play options to test these new options out.

The single player mode is far more complex than it has ever been before. There is an experience point system where you’ll level up and gain access to better abilities and special perks called “wizard powers.” You can choose to play a pinball game with these special abilities on, an arcade game style series of active boosts and ball savers also bolstered by several passive abilities and buffs. If you want to forgo all that extra stuff, you can just choose a classic game and play with all default settings active.

What I like here is the fun of building up experience not only overall, but with each table. You unlock the abilities by playing on specific tables, rather than across all of them. This requires you to put some real time in each table and drives the aforementioned desire to play more often. What I don’t enjoy is that playing with these buffs on are going to be very disorienting if you don’t balance it with games without them on. Competitive players would be best served just forgoing them completely.

There is also a hotseat mode which requires you to switch between up to 4 players after every ball out. This is fast paced and highly competitive, and tests your skills with only one single ball to use. Challenge Mode also has a one-ball mode, as well as a survival mode where you have unlimited balls to achieve set score markers before a timer goes out. Lastly, a 5 minute challenge gives you a set timeframe to score the most you can. Each of these challenge modes are unique in how it is best to approach them, and anything that diversifies a game of pinball is a welcome addition.

Pinball FX3 has two really solid online play options, but there doesn’t seem to be any live, side by side competition which is a disappointment. It would be fun to have that old school, split-screen competition with maybe some “attacks” you could utilize, but nothing like that is here. What we do get is an online competition mode which allows you to choose a player from three selections based on your level, with a set score you have to beat within a time limit. It is pretty rudimentary and I’m not certain that anything is even said to the other player regarding the “competition”, but it is still fun, and it still gives you an idea of how well you are actually playing.

The other online mode is in the form of live tournaments. You enter a tournament which is restricted to certain rules, a mode, and a table and all compete to get the highest score. It isn’t a whole big step forward from leaderboards like in the old version, but it is a fairly nice baby step. You can get in on tournaments at any time, and you’ll be able to flex your skills in official tournaments with the best of the best, given you have the skill (and have bought the required table.) If you have a limited number of tables, you’ll be extremely limited in these online tournaments as well.

As for the new tables that I was able to try out, each of the three were unremarkable in terms of gameplay, but had a great look. The Back to the Future table is the largest of the three and has a litany of play options stemming from your ability to choose a decade target for your “time travel.” There is a lot of fire and lightning that lights up this board and looks great.

The Jaws table doesn’t have a whole lot of flashy aspects to it, and it feels the most like an old classic pinball table. A distance effect with a sun setting over the ocean at the back is really spectacular. The last one, E.T., is my least favorite of the three, but that doesn’t mean there isn’t a lot of great detail and design to be had there. It just doesn’t seem very active, and there is a lot of brown tones that just aren’t attractive. None of these tables have any of the crazy extras that some of the prior releases have had, sticking to a much more classic style which works, but doesn’t stick out in any of the three.

Pinball FX 3 is a decent step forward for Zen Studios’ long appreciated pinball series. There are some fun new single player modes that provide multiple challenges, some competitive modes, and plenty of practice options. The game also provides some direct competition and tournament style online options, though they aren’t much different in practice that the single player games. Overall, this is a nice update for the game and makes it much more diverse and interesting to explore, and the backwards compatibility means you have no real reason not to update and enjoy.

Patrick Rost has been with Gaming Trend since 2013. At first focused on sports coverage, Patrick has gone on to cover a wide range of games and other products for the website. Outside of Gaming Trend, Patrick writes and records music, grinds perpetually in Elder Scrolls Online (PS4), and lives day to day with his two dogs, Bob and Stella.
Related Articles: Pinball FX3
Share
Tweet
Share
Submit