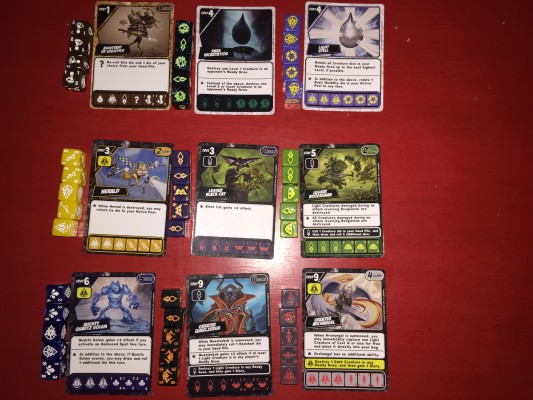 Quarriors has been a popular game for a while now, with a single core set and four expansions, giving the game plenty of variety and adding new concepts to make the game interesting. You might think that WizKids would be happy to give Quarriors a rest, especially after the success of Marvel Dice Masters. However, they have released a new base set called Light vs. Dark with very little fanfare. Again, there are just enough new concepts to make it interesting, but is it something that is better suited for newcomers to Quarriors, or will it invigorate old fans of the game?

If you haven’t played Quarriors before, you might want to go to my review here (link will be put into review) to take a look at how the game is played.

Light vs Dark comes in the same size box as the previous expansions like Quarmageddon, Quest of the Qladiator, and Quartifacts. However, Quarriors players will notice a big difference in the components. Here’s the breakdown:

The obvious change that stands out are the slightly larger Quiddity dice, the currency of the game. Instead of having X Quiddity dice at the beginning of the game that can be culled later, each player is given two specific Quiddity dice. These dice are always a part of your roll and are never placed in the discard area or dice bag, and they are bigger as a reminder of this. They also can’t be targeted by spells except to be rerolled. While the original Quiddity dice would only give you one Quiddity most of the time, and two on a lucky roll, these can give you up to three Quiddity in a single roll.

The setup of Light vs Dark has changed slightly if you are using just this base set. Three different Assistant power cards are provided. This makes the Assistants more useful during the game instead of useless filler because they actually have powers. When drawing the cards to be used for the wilds, you draw two spells and six creatures instead of typical three spells and seven creatures. That’s because only two sets of spell dice and six sets of creature dice are provided. It’s not a huge limitation of the set, and if you have previous sets there is nothing wrong with adding them in and using them with Light vs Dark to get seven creatures and three wilds.

Each spell and creature in this set produces Quiddity on half of its sides. Half of the dice produce Light Quiddity and the other half dispense Dark Quiddity. Each creature can be bought with each kind of Quiddity, but if you use at least one Quiddity of the same type for that monster, you only have to pay the discounted Quiddity cost, which is shown in the upper left corner of the card under the cost. Since you have a high likelihood of rolling Light or Dark Quiddity, it makes it easier to purchase the higher cost monsters earlier.

The power cards also have areas that show Anchored Spells that can be used by any play at any time as long as they have enough Quiddity to cast them. These always require Light or Dark Quiddity to use, and they aren’t like capturing dice from the quarry. All of the Quiddity spent must be of the special Light or Dark type necessary.

Culling dice used to be something you could do whenever a creature of yours scored glory at the beginning of your turn. Now only special powers allow you to cull dice. Culling was necessary before because of the glut of Quiddity and Assistant dice you started out with before, but because the new Quiddity dice are rolled every turn you should be drawing more creatures and have enough Quiddity to summon them.

The game ends when either a player gains enough Glory points to win the game, or when four or more Creature cards no longer have any dice remaining to be purchased. Admittedly, the first time I played this version, I forgot about the rule about having empty creature cards, so my group played a little longer than we probably should have.

With Light vs Dark, we were able to capture the higher cost quarry dice faster than the original game. Having the opportunity to roll three Quiddity on a single die and getting a discount on the creatures if you rolled the right Quiddity made purchasing the higher cost creatures much easier. It also made it easier to summon creatures and capture one during your turn. However, in the four player game it made it seem like the monsters constantly battled, making it hard to score any Glory points. While I feel this helped to balance the game, it did make the game drag on a little more than I would have liked to see.

Having two dice that guaranteed Quiddity meant that the other three dice you rolled were either creatures or spells, and they would be ones that you bought unless they were the Assistants that you start with. This eliminates the rolls where almost all of your dice are Quiddity and you can’t place a creature out no matter what you roll. That doesn’t mean that you won’t have any bad rolls, but your chances of putting a creature out increase significantly.

I like the thought of the anchored spells, it did make the game slower because it added another way to spend Quiddity. While some of my friends could decide fairly quickly what they wanted to do, those who had analysis paralysis took much longer to decide. The spells are pretty powerful for the amount of Quiddity spent, which can make them even more desirable to cast.

In the end, I do like the Light and Dark Quiddity mechanic of Quarriors Light vs Dark. I do hope that it is supported in future expansions. However, I would only recommend Light vs Dark to experienced players because the additional choices available to players make it more complex. Those who enjoy the original though will find a lot to like with this set.