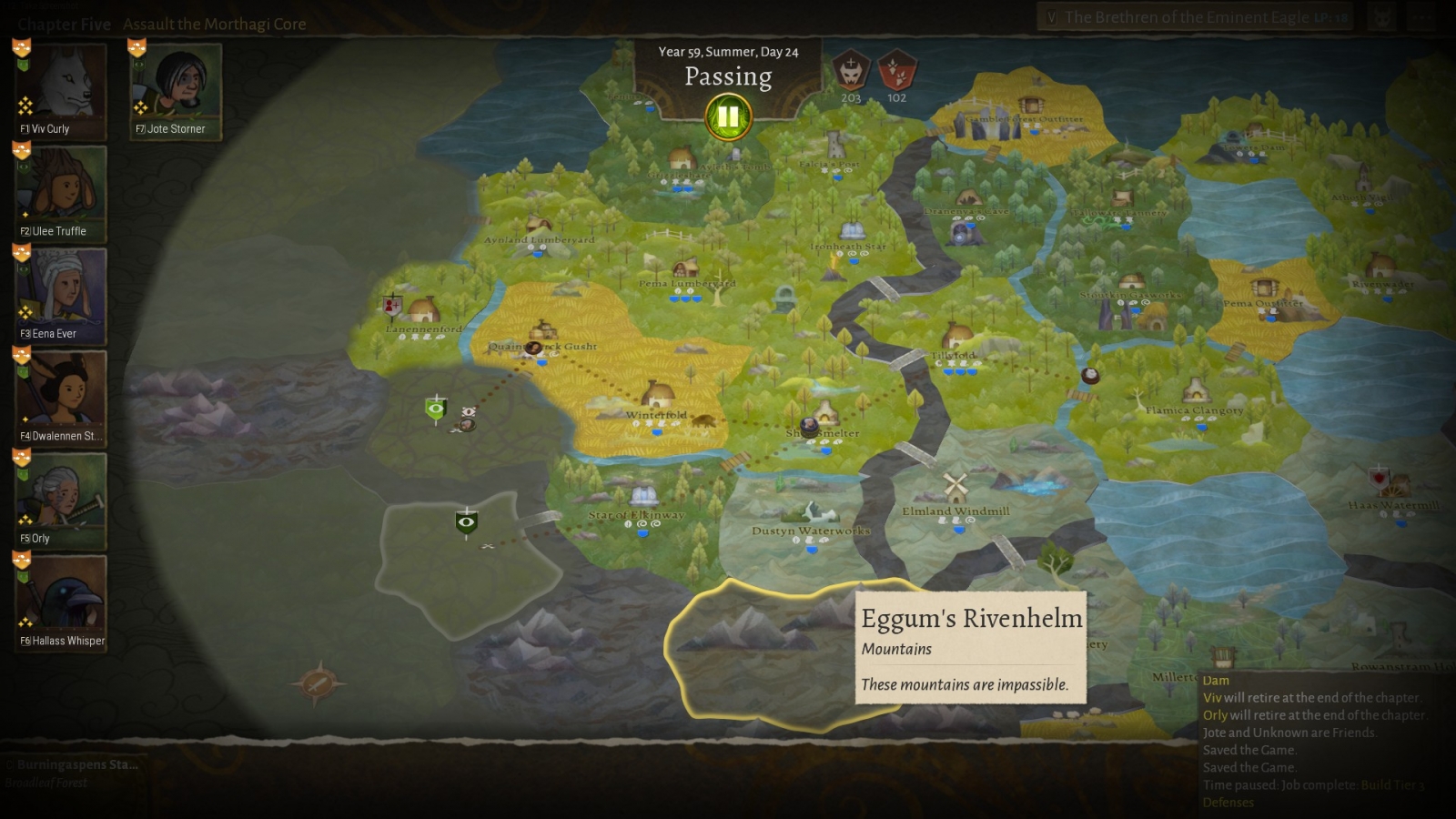 Wildermyth Review — DnD for the lonely

I may adore tabletop role playing games, but that doesn’t mean I can play them often or really ever. I played Dungeons and Dragons exactly once in college, then dungeon mastered for my siblings twice, and I watch actual play shows like Stitch of Fate and The “C” Team, but that’s it for my experience with the game. Thanks to COVID, a lack of nearby friends, and a horrendous internet connection, as much as I want to I can’t play more. Thankfully, Wildermyth has my back; I can create my own adventuring party, and embark on procedurally generated adventures that have big consequences on the characters’ lives.

Whatever campaign you pick (from five pre-written stories or a series of generated chapters), you’ll create a few characters to start the story off with. You can choose from three classes for your characters: Warrior, Hunter, and Mystic. Warriors excel at taking and dealing melee damage to protect the party, while Hunters have a bit more utility and can inflict various status effects. Mystics are a bit weirder, their magic involves interfusing with objects in the environment and using those to cast spells. For example, interfusing with a tree will allow the user to create a small, wood explosion in an area nearby. It can take some experimentation to fully grasp what Mystics can do, but it’s pretty simple once you get the hang of it.

Even if characters are the same class, they can play very differently thanks to their equipment, personality traits, level up bonuses, and relationships with other characters. You might give a Warrior a bow or a Mystic a two-handed axe, and each will deal more damage when nearby each other because they’re in love. If two characters are rivals, they may try to one-up each other in fights, which can lead to some reckless decisions.

Combat itself takes place on a grid, which looks like a neat paper diorama. Combatants have three action points: two are used up in attacks and such while the free action is used for movement and a few specific skills. Your characters can take their actions in any order you wish, attacking enemies, casting spells, or using abilities. Once your turn is up, the enemy will take their turn and the cycle repeats until you fulfil the victory condition, die, or escape. Dying in combat can have big consequences, if you choose that character can sacrifice themself for an advantage, but consequently be, well, dead for the rest of the campaign. If you have them fall back, however, they may still be maimed and lose a limb or gain a scar which will affect them for the rest of the adventure. Both of these situations can create great story moments, like when my main heroine for the first campaign had to sacrifice herself to defeat the big bad or another character losing an eye just before they retired. Because these moments come up during gameplay, they feel like natural extensions of the story you’re telling. 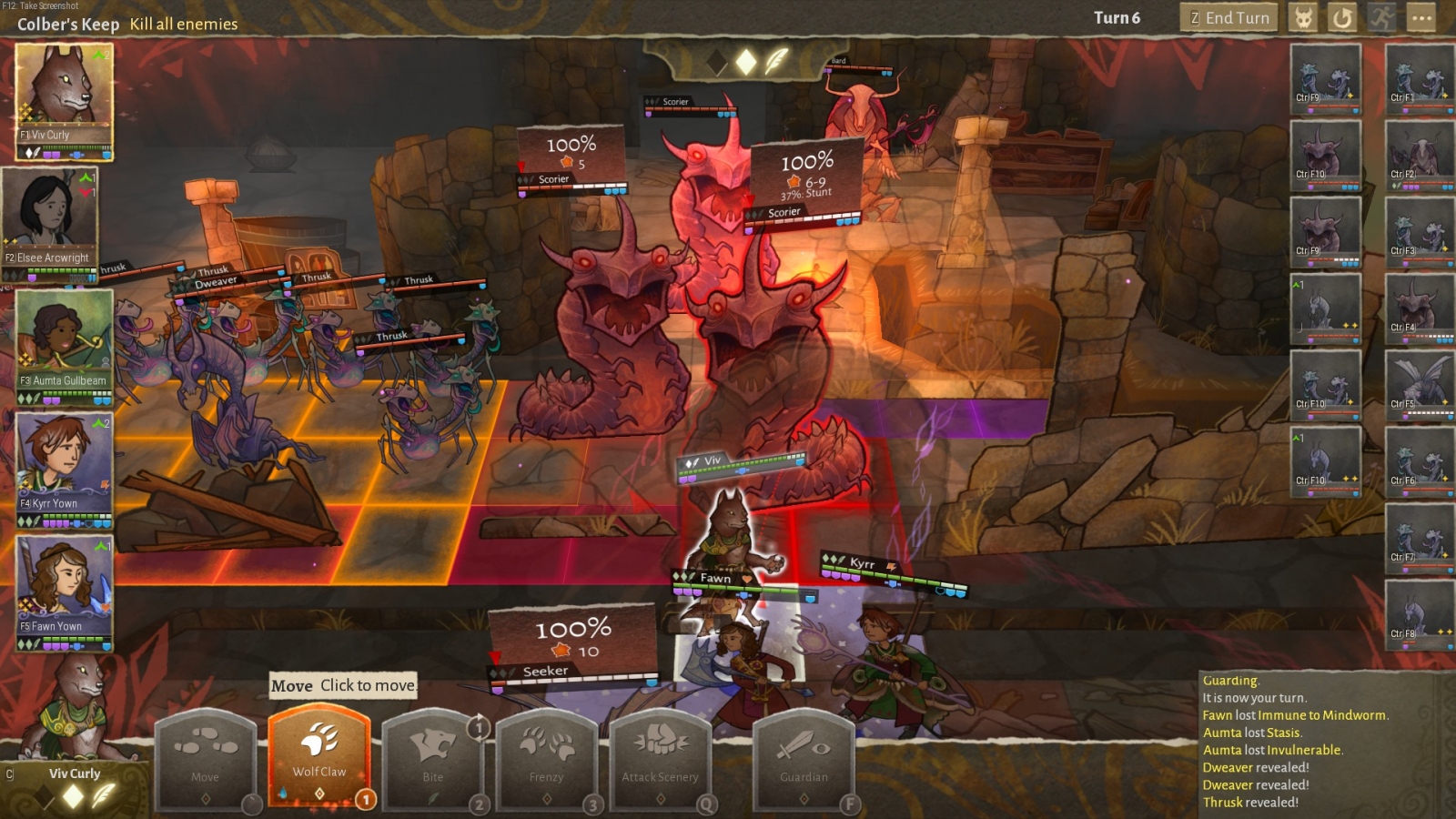 The story is definitely the bigger half of Wildermyth. As you explore the overworld map, sending character tokens to scout areas, build bridges and pathways, craft equipment, or secure a location, you’ll come across events. These scenes are presented in a comic book fashion, a good use of the papercraft visual style. Depending on what’s happening, you may be asked to make a choice, sometimes small like a fork in the road or bigger things like accepting a blessing from the wolf god. Just like in combat, what you do here will affect characters either immediately or further down the line. There are a ton of events, so you’re bound to see new things each playthrough, but there are a few that repeat fairly often between campaigns or even chapters which can get annoying. I wish there was some way to make the game opt for new events more often, as my fourth playthrough was filled with repeats that I had already seen all the outcomes for.

Wildermyth Review — DnD for the lonely

Wildermyth is a fun storytelling game with a ton of possible variance between playthroughs. The stories you make with the game can be very interesting, though it has a tendency to repeat itself a little too frequently.

David is the kind of person to wear his heart on his sleeve. He can find positives in anything, like this is a person who loved Star Fox Zero to death. You’ll see him playing all kinds of games: AAAs, Indies, game jam games, games of all genres, and writing about them! Here. On this website. When not writing or playing games, you can find David making music, games, or enjoying a good book. David’s favorite games include NieR: Automata, Mother 3, and Gravity Rush.
Related Articles: Indies, Wildermyth
Share
Tweet
Share
Submit