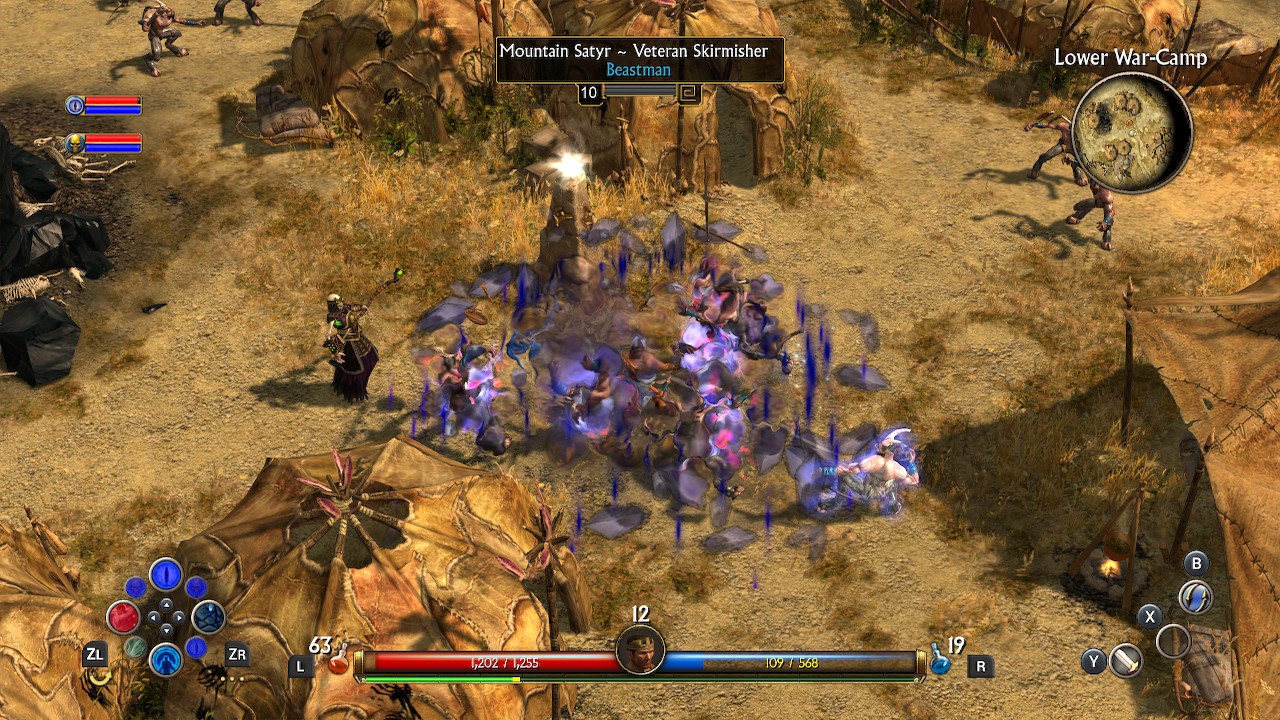 After over a decade since the game’s original release on PC, and ports for PlayStation 4 and Xbox One coming out earlier this year, Titan Quest is finally making its way to the Nintendo Switch. Now’s the time to not only take on this classic ARPG at home, but on the go as well.

Titan Quest focuses on Greek lore, where the Gods fought against the Titans long ago and cast them out. People have been able to live their lives free from the dangers of the Titans, but suddenly that all changes. Hordes of monsters start appearing and attacking people, which causes mankind to turn to the Gods. They realize that they can’t contact the Gods and this signifies that the Titans may become a threat once more. It is up to you, a lone soldier, to determine the cause of the monster attacks, strike down the perpetrator, and hopefully find a way to contact the Gods once more.

You start off as a generic soldier wielding a wooden weapon, but as you progress and level up, you’ll slowly become an unstoppable fighter. When you reach level two, you are given the chance to choose a mastery; this mastery determines what skills you can obtain, and what kind of fighter you will be. There are a good variety of choices, including dream, nature, spirit, storm, and more. I personally opted for dream, which allows me to use skills that manipulate the minds and consciousness of my enemies. Some of these include sand that puts enemies to sleep for a short time, an attack where you turn invisible and rush the enemy before unleashing a devastating strike, and even summoning a nightmare that fights by your side until it gets killed.

A close-up of me and my pet nightmare

If you feel a bit disappointed that you had to abandon so many other masteries, don’t worry! When you reach level eight, you get to choose a secondary mastery. This took me by surprise, but I happily chose spirit as my secondary mastery. I felt like it would fit perfectly with my dream skills, and I wasn’t disappointed. The spirit mastery gave me access to skills such as a blast that siphons health, a spell that forces an enemy to fight for me for a short time, and the ability to summon a lich king that fights alongside me until he gets killed. You can have more than one summoned creature out at a time, but only one of each type can be out at once. So if you have a nightmare out and use its summon skill, you just replace it with a new one. Be mindful of your skill usage though, because using skills requires energy.

In addition to masteries, leveling up increases your stats, gives you two attribute points, and gives you three skill points. The attribute points are used to improve strength, intelligence, and dexterity. Strength affects physical attacks, intelligence affects magic attacks, and dexterity affects aspects such as offensive and defensive ability, elemental damage, and other status effects you inflict. Skill points are used to increase the level of your masteries, unlock skills, and level up those skills. Each mastery has its own level and skill tree, so you have to manage your points based on what kind of fighter you want to be.

Besides skills, you will also fight using regular attacks. Titan Quest has a great variety of weapons that you can equip to slay monsters with. You can find swords, maces, bows, staves, axes, spears, mallets, and more. If you can’t choose just one, you don’t have to; you can equip two weapons and swap between them at the press of a button. I primarily use a staff, but have a melee weapon ready for close quarters combat. Some weapons are basic, while others have some cool effects, such as causing bleeding damage, adding bonus elemental damage, boosting certain attributes, etc. The same thing goes for the armor that you find as well, although their effects focus more on defensive or passive bonuses such as health or energy regeneration.

The story itself isn’t the most interesting, but the setting and world are engaging enough to where that doesn’t matter. Traveling through forests, deserts, swamps, and towns while fighting monsters such as harpies, boars, the undead, and much more, is entertaining to say the least. Speaking of environments, this is where one of my few issues comes into play. Titan Quest looks alright with its updated graphics, but you can still see its age. That isn’t the problem however; the problem is the graphical issues such as textures not loading in correctly and the screen flashing when some areas load. Occasionally, random sections of the world will be a faded white/grey color, although they sometimes fix themselves after a few seconds. Other times, they don’t go away until you move away from the area. I noticed that these texture issues were more frequent in swamp and desert areas though. That being said, it wasn’t enough to ruin the game for me, but it does get a bit annoying when it pops up.

The world is full of many things that you’ll want to take advantage of, including merchants, caravans, mystics, rebirth fountains, and portals. The merchants are your run of the mill stores that offer weapons, armor, and potions to buy, while also allowing you to sell your extra goodies for gold. Caravans act as storage for items that you want to save for later, but don’t want to have clogging up your limited inventory space. Every caravan is connected, so you don’t have to return to the same caravan if you want to retrieve some items. Mystics allow you to reallocate your skill points by spending gold. You can only do so one point at a time, and every time you reallocate a point, the cost to do it increases. There’s no limit, but it can get expensive pretty quickly. Rebirth fountains act as checkpoints, so if you die, you respawn at the last fountain that you activated. Portals are fast travel points that allow you to teleport to any city that you’ve been to. After you touch a portal platform, that portal becomes available for use permanently. You can also open a portal wherever you are in the world, and teleport to one of the city portals. This is especially helpful for cutting down travel time.

The gameplay is smooth, which is impressive considering how old the game is, and the fact that this is a port. There are almost no delays between button presses and attacks being used, unless your character needs to move within range to use that move. Unfortunately, I did have a few times where my game froze during fights with groups of enemies. It seems as if the game got overwhelmed by everything that was going on, and crashed in the process. The Switch itself had no issues, so all I had to do was close the game and restart it, but carefully avoid the cluster of enemies the second time around.

I also took some time to test out the online multiplayer aspect thanks to my good friend Ron. I hosted the game, and we were surprised to see that he started in a completely different location than me when he joined my server. I am a great deal farther in the story, but the fact that we could be in the same server, and not even be on the same landmass was impressive. I teleported over to him, and we started wiping out monsters together. The game still ran as smooth as it did when I was playing solo, with no slowdowns or lag. Experience earned was shared between characters, and the ability to trade gives the chance to share gold and items. We also found that each player’s personal portal was available to use by both players. Through an interesting test, we discovered that one player can open their personal portal in a location that their friend hasn’t reached yet, allowing the friend to teleport to said location before they should. This doesn’t break the game, as they still need to play through the main quests in order if they want to beat the game, but it does allow players to bring their friends to later areas in order to boost their levels faster. It can be a nice way to help your friends catch up in levels if you want to take on the journey together even though they may be farther behind you storywise.

Titan Quest is a fun port of an older PC game, although it does have its share of faults. It shows its age and has some graphical glitches, but that doesn’t ruin the game. There are plenty of fun skills that make combat exciting, along with a great variety of equipment to choose from. Titan Quest is fun enough on its own, but playing multiplayer with a friend adds another layer of entertainment to the game. That being said, Titan Quest on Nintendo Switch is well worth your time if you can overlook its occasional graphical issues.

Titan Quest is an entertaining port that brings back a blast from the past. The gameplay is smooth, the controls are precise, and the skills are pretty cool as well. The texture loading issues and freezes that occasionally happen can be annoying, but they aren't game-breaking. Titan Quest can also be enjoyed solo or with friends.

Codi loves to play video games and watch movies. He will watch almost any kind of movie just to experience them. His ideas take inspiration from the shows and movies he watches, and games he plays. He also loves a good pun.
Related Articles: Titan Quest
Share
Tweet
Share
Submit