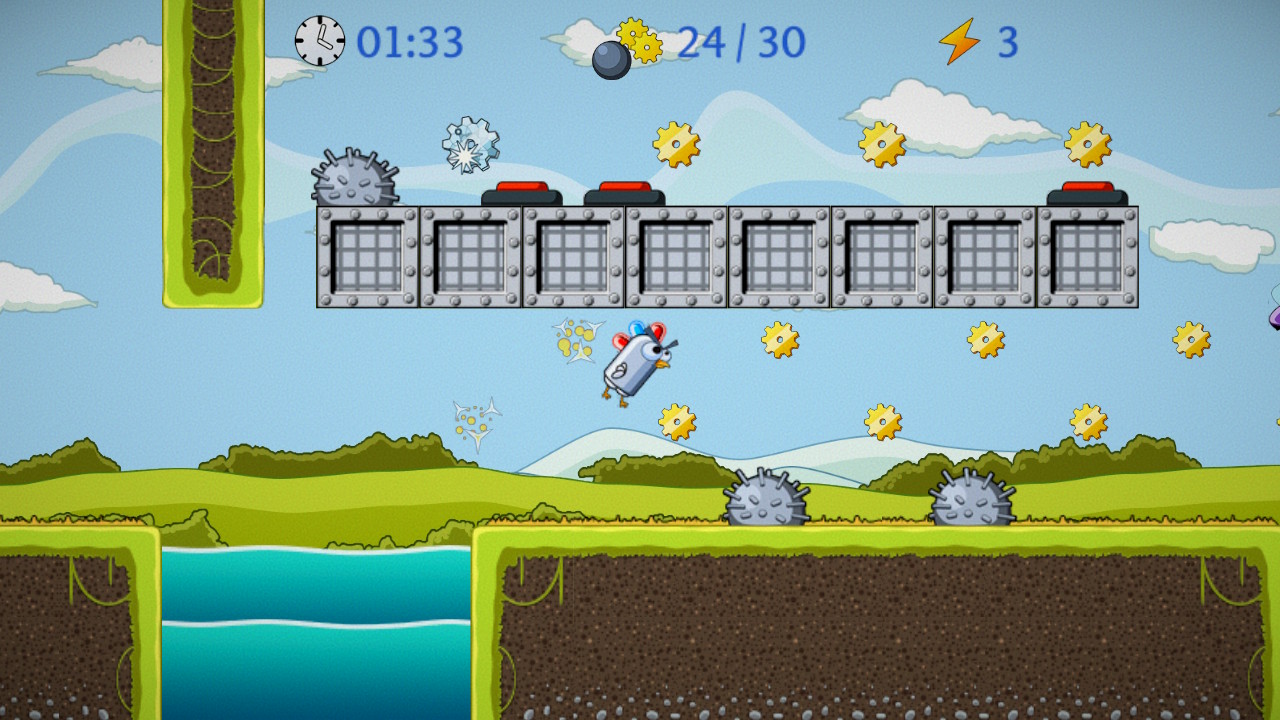 Many games have sought to provide players with a good challenge, but it doesn’t always pan out, and the game ends up feeling fairly easy. Kentucky Robo Chicken falls closer to that side of the scale. However, this works in its favor.

Kentucky Robo Chicken has a paper thin story, but a story nonetheless. The game starts with a TV screen laying out the plot through a series of images. The robotic chicken has two red bulbs and one blue one on top of his head. He spots another red one in a pile of trash at the junkyard, but a mysterious hooded figure snags it and runs away. He starts to chase after the figure in order to get the bulb, and this is where the gameplay begins.

The gameplay is an interesting mixture of Balloon Fight and Super Meat Boy. The controls are moving left and right, jumping, and flapping your wings to fly. Pressing B lets you jump, while continuing to tap or hold B causes you to fly. You’ll need to fly carefully in order to avoid the many obstacles throughout the levels. As such, precise button inputs are crucial. There’s also a boost that you can activate by pressing A. Doing so quickly launches you forward, which can be useful for threading the needle in tough situations.

The levels are pretty simplistic, but they are well designed and colorful. Sure, some of the later levels have some challenging areas, but that just adds to the fun. You’ll encounter a variety of obstacles and traps, including mines, flies, lasers, fire, and red dragon head creatures. Avoiding contact with these obstacles will keep you alive, and sometimes you need to get the timing just right in order to get by. The game only gets frustrating if you get anxious and start trying to rush through the levels too much. You can speed through some parts, but some sections require you to slow down in order to succeed. If you die though, you must restart the entire level.

In order to complete each level, you have two goals to complete: collect a designated number of gears and make it to the barn at the end. There are more gears scattered around the levels than you need to collect, so you don’t need every gear in order to beat the level. It’s best to grab as many as you can right off the bat so you can make sure you don’t have to backtrack. Thankfully, unless you’re intentionally powering through the levels while avoiding the gears, you won’t have to backtrack very often. You can also pick up lightning bolts, which give you extra boosts during that level. Boosts are needed in order to smash through bales of hay that will occasionally block your path.

Kentucky Robo Chicken is a fun little game that will provide a decent challenge for its low price. There are only 30 levels, and it will only take about an hour or so to complete depending on how well you do, but it’s worth the time. The gameplay is simple, but that is part of the charm. If you have a few bucks to spend on a game to pass the time for a bit, then Kentucky Robo Chicken might be worth checking out.

Kentucky Robo Chicken is a cute 2D platformer that takes inspiration from Balloon Fight and Super Meat Boy. There's a decent challenge, but nothing too intense. The game doesn't take long to beat, but it's worth a few bucks to check out.

Codi loves to play video games and watch movies. He will watch almost any kind of movie just to experience them. His ideas take inspiration from the shows and movies he watches, and games he plays. He also loves a good pun.
Related Articles: Kentucky Robo Chicken
Share
Tweet
Share
Submit