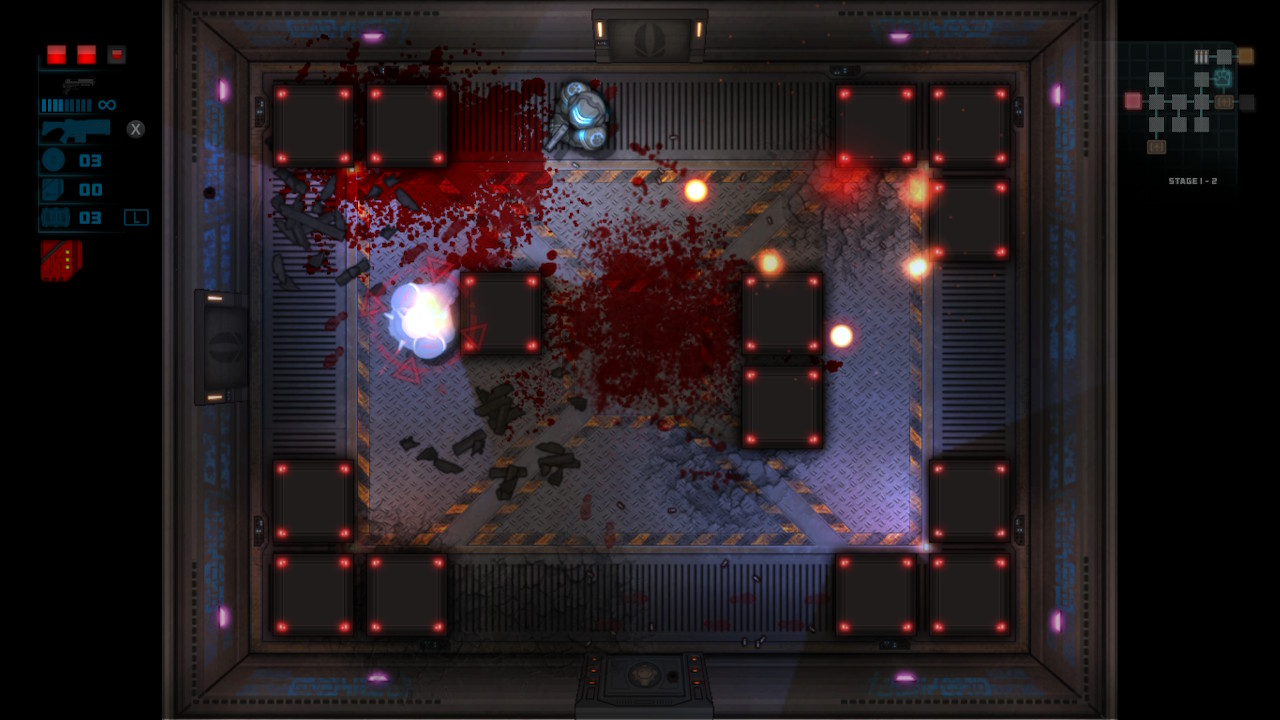 Twin-stick shooters have been very popular over the years, and the genre only grows larger with more high-quality titles every year. Mixing this type of gameplay with procedurally generated stages adds even more fun and replayability to the equation. Games like Enter the Gungeon have proven that very well, and Feral Fury aims to hit that same sweet spot.

Feral Fury doesn’t have much of a story, but the gist is that it revolves around a war between pandas and pigs. It sounds crazy, but it’s true. The characters that you can play as are types of pandas, but you can unlock a pig warrior as well. The enemies include pig soldiers, pig mages, pig warriors, giant bugs, and more. For the most part, they’re nasty looking creatures, so you’ll have no problem wanting to wipe them out as quickly as possible.

The game is split into five chapters, each having three levels and a boss battle. The levels are composed of rooms that are procedurally generated in an almost labyrinth-like pattern. In order to complete a level, you need to find the red computer disk that unlocks that level’s exit and then use it on the exit door. This takes you to a teleporter room that will transport you to the next level. Depending on how lucky you get, you could end up finding the disk and the exit door very quickly, or you might have to search every room in that stage. It’s not always best to rush through a stage; if you take the time to explore, you can acquire better weapons, upgrades, items, and more. That being said, it doesn’t take that long to get through each level even when exploring it to the fullest.

As you fight your way through each room, you’ll be moving, shooting, and dodge-rolling. When you’re shooting, you’ll have to reload when your clip runs out of ammo, but thankfully it doesn’t take long to reload. Your main weapon has unlimited ammo, so feel free to fire at will. Secondary weapons obtained from special chests found in various stages have finite ammunition though. You can find ammo pickups to refill it, but they aren’t that plentiful. If you’d rather save your more powerful secondary weapon for a special occasion or a boss fight, you can press X to swap back to your main weapon. When I picked up a pulse rifle or submachine gun, I almost always kept them on the back burner until I reached a boss. These weapons can help you lay into the bosses with ease, practically decimating them if you play your cards right. Along with that, you’ll need to use the dodge-roll in order to avoid bullets. You can roll through them, which can be incredibly helpful.

As discussed earlier, you can find weapons, upgrades, and more scattered around the stages. The special chests can only be opened with blue computer disks that you can randomly find in the rooms or buy from vending machines with gold you’ve collected. Upgrades can also be found in these chests or even hidden in breakable objects. For example, you can find critical-hit boosts, temporary health blocks, homing bullets, and more. These stat boosts are definitely helpful and should be grabbed as soon as you see them. Speaking of stat boosts, there’s a unique room that offers a risk-reward scenario to the player. If you walk into the center of this room, you get injected with two giant syringes, which give you a permanent boost to all of your stats, but it sacrifices one of your health blocks. You don’t have to make this trade if you don’t want to, but the option is tempting once in awhile. You’ll be turned into a glass cannon; stronger, but far easier to take out.

There are four characters to play as, each with their own signature weapon and health. The starting character is a panda soldier that uses a pistol and has three health blocks. After making it far enough into the game, you can unlock the other three characters: the enforcer, Rose the red, and the traitor. The enforcer uses a shotgun, Rose uses a pulse rifle, and the traitor uses a pulse rifle and grenades. They each have their own advantages and disadvantages, but they’re all fun to play in their own way. My personal favorite is Rose the red since her weapon fires so quickly.

Feral Fury isn’t the hardest game, but that doesn’t mean that it’s a cake-walk. Playing on normal or hard offers a good challenge that will keep you on your toes. The normal enemies only really become a problem if you happen to get cornered or end up in a room that is hard to maneuver through. Once you recognize how each enemy fights, they become easier to read and avoid. The same thing applies to the bosses, but the first time you face them, they’ll probably get a hit or two on you if you don’t know what to expect. Easy mode on the other hand…is incredibly easy. No surprise, but it takes it a step farther than I first thought. The description says ” butterflies and birthday parties,” and I didn’t expect that to be taken literally. Defeated enemies have butterflies swarm above them, while boss fights are replaced with birthday parties for harmless pigs. The sad part is that you have to eliminate the innocent pigs in order to continue, which made me feel a little bad. At the same time, the birthday parties will make you chuckle with how out of place they are.

Even though the game isn’t that hard, it’s a fun twin-stick shooter that is worth checking out. It sadly doesn’t have as much to offer as games like Enter the Gungeon do, but that doesn’t make it a bad game. If more content was added, like more weapons, upgrades, enemies, levels, and so on, then the game could be so much better. Depending on how well you do, it might not take you long to beat the game with all four characters and experience everything. That being said, for its low price point, Feral Fury might just be worth checking out.

Feral Fury is a nice twin-stick shooter that is reminiscent of games like Enter the Gungeon, although it doesn't have as much content. The gameplay is smooth and entertaining, with four different characters to play as. It offers a decent challenge without being overbearing.

Codi loves to play video games and watch movies. He will watch almost any kind of movie just to experience them. His ideas take inspiration from the shows and movies he watches, and games he plays. He also loves a good pun.
Related Articles: Feral Fury
Share
Tweet
Share
Submit