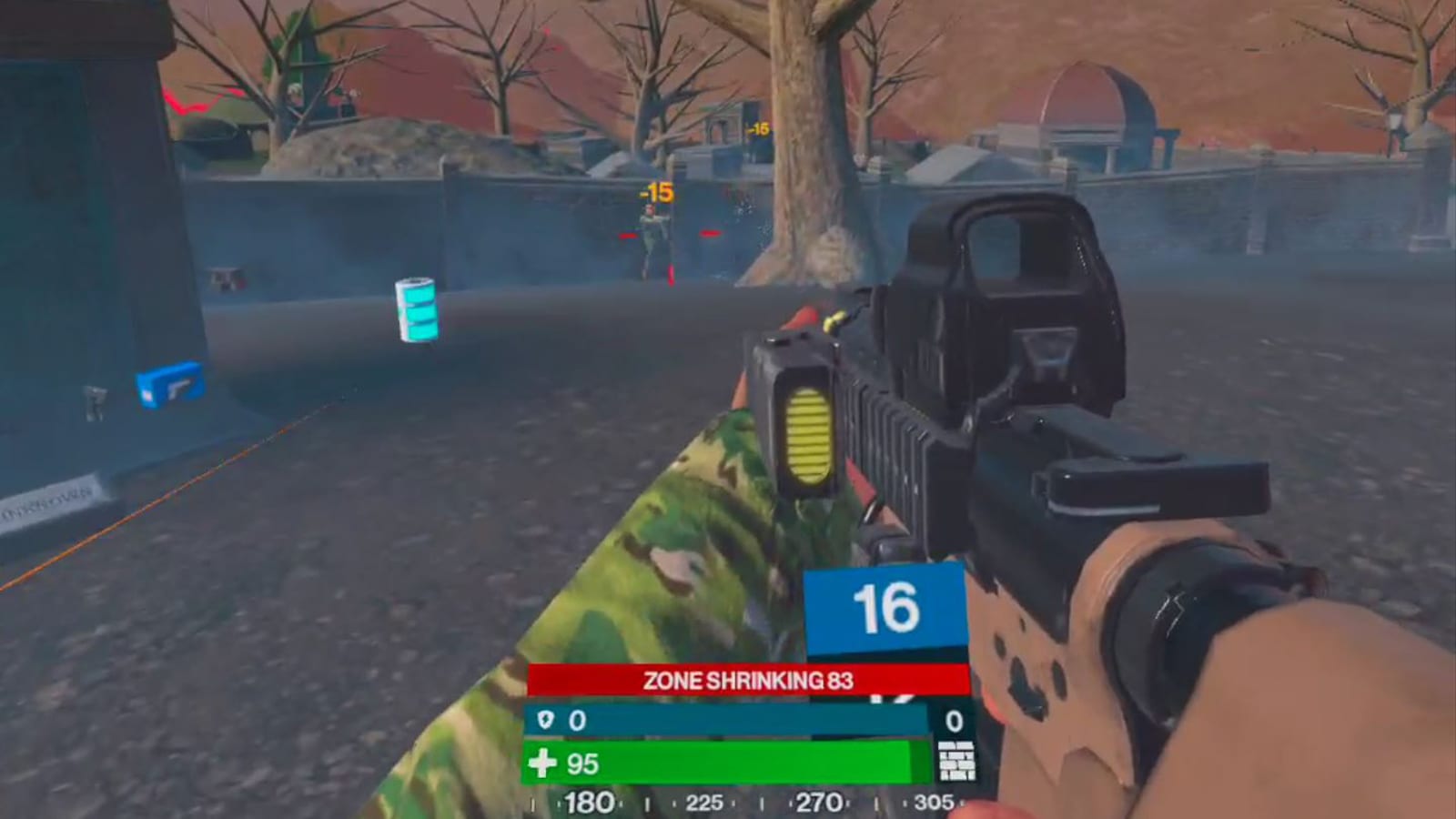 To make a successful and (most importantly) fun game, it needs to be unique in its own way or the first of its kind. We see a lot of FPS or battle royale titles that copy aspects of other successful titles and try to make it their own. Some are successful, others are a drag to play. Population: One is by no means a drag to play, and it’s a refreshing spin to the FPS battle royale genre; all in virtual reality. And man, if it wasn’t for my Oculus Quest 2’s battery dying on me, I’d never be able to put it down.

Population: One is an online-only battle royale that is one of the first of its kind. You’re probably wondering how a battle royale translates into the world of VR? How can one successfully maintain a high level of resource management and game awareness? In battle royales like PlayerUnknown’s Battlegrounds, resource management is the biggest skill to master. Games like Call of Duty: Warzone try to take this aspect at limit it to its barest form so that you can focus on the high-speed gameplay. Population: One stands a bit between the two, giving you the ability to access your loot via a backpack, but limits you from altering attachments and simply displays your kit. And to be honest, this design choice is one of the best parts of this game. 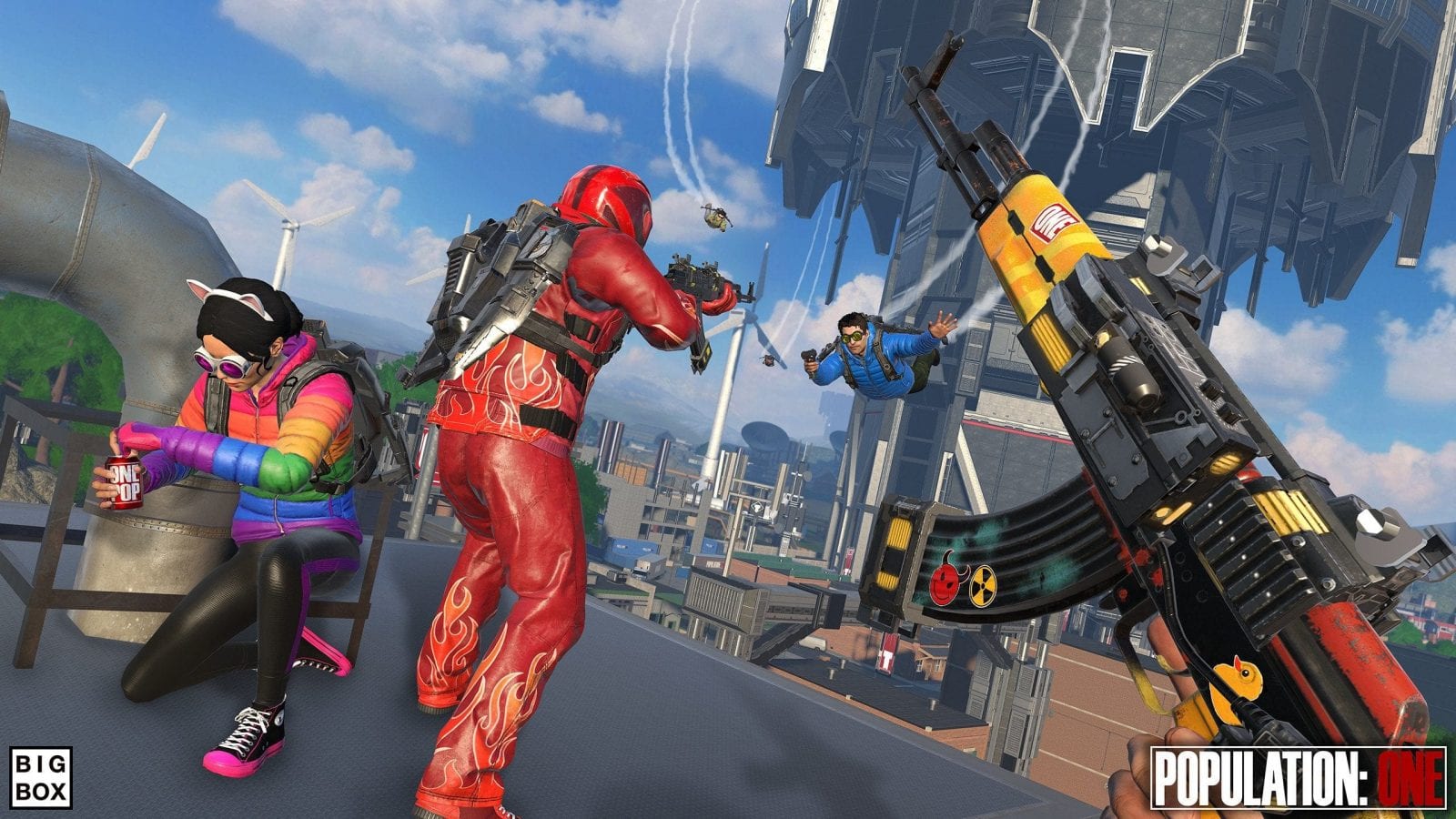 Because for that reason, you can then focus on what’s important in a VR battle royale; game awareness. In all battle royale games, game awareness is key to staying alive and securing a win. It encompasses everything you do in a game, like where’s the best spot to have total line of sight of your enemies or the best place to hole up in and ambush unsuspecting players. In VR, it’s a whole new experience. Population: One does a superb job in allowing you to do basically anything you could want in a battle royale. You can climb, fly, vault, and build, and all these mechanics are easy to use. Getting shot at but can’t find the enemy? Easy, build yourself a fort until you can find them. Want to eliminate unsuspecting players? Sure! Find some high ground and climb it with ease. We see a lot of battle royale games use some form of these mechanics for the betterment of the gameplay, but, for some reason, they’re a whole lot more fun to use in VR.

In Population: One you’ll find plenty of things to do to stay interested in the game. There are XP challenges to accomplish like “do X number of damage with a pistol”, and you’ll get a new one each day. There’s also a loot-battle-pass… thing where you need to collect 20 energy cores within a small number of days. After 5, 10, and 20 energy cores you’ll receive a new weapon skin. As you level up, you’ll unlock characters, character outfits, and weapon skins. All these unlockables are interesting in their own right, and there’s plenty to unlock over time. Do note: there are microtransactions. Thankfully, they have no impact on the game other than letting you buy cosmetics. 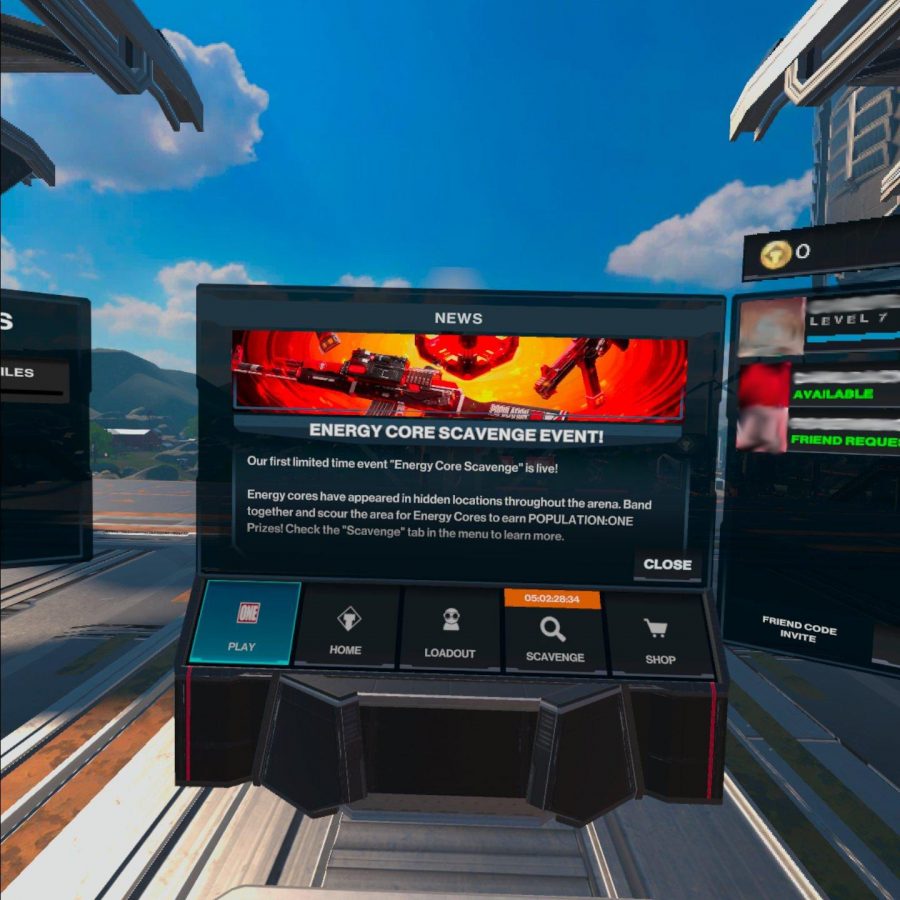 A simple and intuitive menu system

The developers of Population: One, Big Box VR, have made a few interesting decisions to alter the gameplay — all in the name of keeping you in the action. As you already know, there’s a backpack you can access that displays all your loot. In order to prevent you from accidentally dropping stuff, weapons and objects will stay in your hand if you have them selected from the backpack.

There are a few consequences to this design choice however, like not being able to physically throw a grenade (you just pull the trigger and the grenade is thrown on a trajectory path that’s displayed to the player), dual wield pistols, or throw items to your teammates (you’re limited to pinging and highlighting the item). 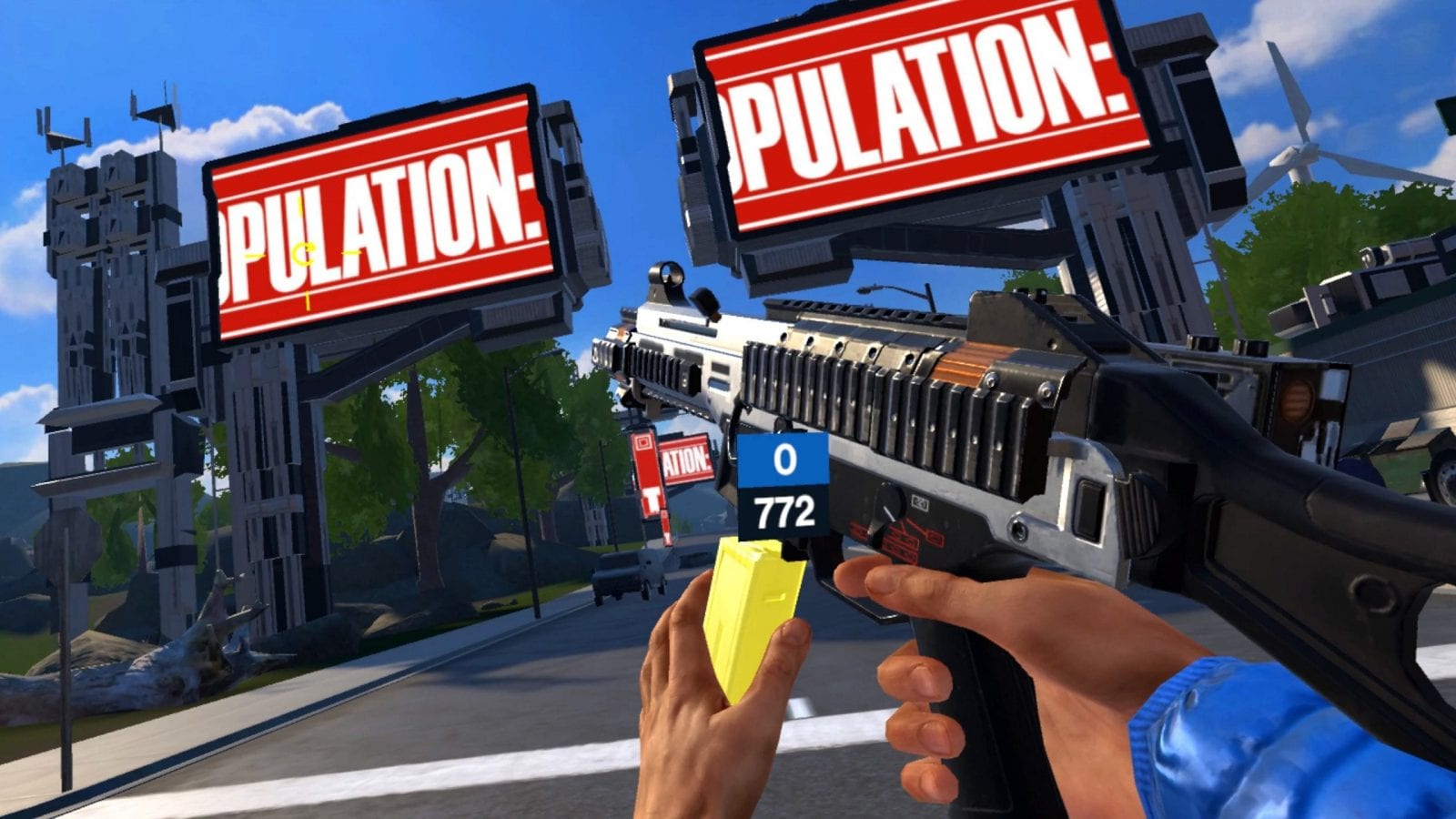 Reloading mechanics, as shown in this image- Courtesy of Big Box VR

Big Box VR have also changed the reloading mechanic from what you might expect in a VR game. Instead of ammunition being holstered to your waist, it instead appears below the magazine well of your gun. So, you’re not drawing a magazine each time you need to reload; simply slide the magazine into the gun, pull the charging handle, and the gun is ready to fire. This design choice makes it really, really easy to reload within 1 or 2 seconds with essentially any gun, but takes away the immersion of operating a gun in a VR game. Not only that, but because you can’t release your hand from the grip, it makes it a bit annoying reloading something like an AK-47 or a bolt action rifle, where the charging handle is on the opposite side of the gun (Do note, I shoot right-handed). So there’s a give and take in this situation — do you want one second reloads? Or do you want immersive gameplay? In my opinion, I’d much rather have the latter.

Another design choice I understand but don’t completely agree with is how a sniper rifle’s scope works. The way most VR players are used to is one of two things; either the scope is realistic (has two lenses), or it’s zoomed in image projected onto the objective lens of the scope (the part you look into). The first one is harder to operate, as you need to treat the scope as if your head is attached to the gun. This makes sense for MilSims like Onward, where realism is key. The second one, and the one I’d have much preferred to see, is the projected image. It means you can raise the gun up to your shoulder and feel like you’re looking through a scope, without having to lose time trying to properly line up the gun. Big Box VR has again gone one step further in the name of fast and efficient gameplay, but two steps back on immersion, and made it so when you grab the hand guard (front grip of the rifle) you’re taken to an image of what the scope is seeing. Check the reference image below. 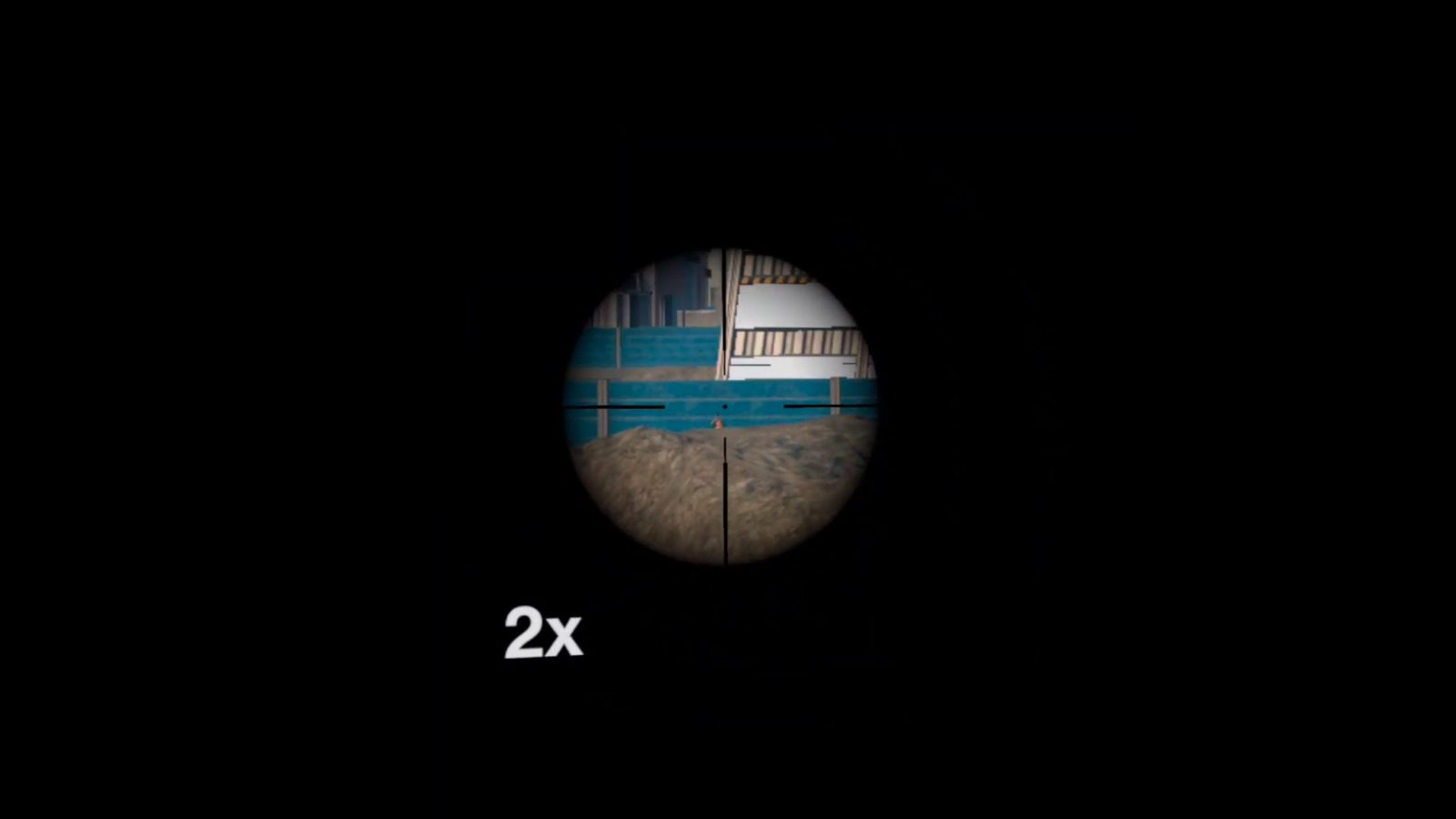 Jumping in and out of this screen is very jarring

Again, I totally understand the design choice, but it’s jarring jumping in and out of the scope, and you also lose total sight of your left eye. It enables players to sneak up on you because you’ve lost all vision bar what the scope sees. It definitely does help players who are new to VR operate a scoped rifle, but for veteran VR players it takes away one of the immersive parts of using a VR gun. An option in the settings to set an enhanced immersion option would be a blessing, but as of writing this review, you’re stuck with it.

One other thing I’d like to see is the ability to go prone. While the gameplay is designed to have the players always moving and climbing, being able to go prone would deeply assist being able to steady your weapon and even set up ambush routes. Hell, even taking cover would benefit. If you try to duck under a knee-high object, the player model goes only as far as if you were crouching.

Population: One is nearly a fully immersive VR experience, it’s just got a few things that take away from becoming a perfect VR battle royale. I’d like to see a few changes implemented for the sake of immersion, like going prone or changing how to reload. As it currently stands, the game is built on speed and efficiency — keeping you right in the action. A revamped settings menu that displays these immersion options would greatly assist veteran VR FPS players. Nevertheless, for what the game has accomplished, it’s done so perfectly. Mechanics are fluid and fun, and each firefight is an adrenaline rush. Being able to do nearly anything you want in a VR battle royale creates opportunities for unique and fun moments. Population: One is exactly the kind of VR game to play right now, and breathes new life into a saturated PC market. Big Box VR has turned the tide of what a VR battle royale should be and has set the bar high for the genre.

Population: One is a fantastic and rewarding experience. Dropping into the map and taking on your opponents feels amazing, and it all comes down to your own skill. There are a few things holding this game back from being a fully immersive VR experience, but for what it has accomplished, it’s done it amazingly. Big Box VR has set the bar high for the VR battle royale market.

With a deep interest in writing, Ben followed that into a Journalism degree. As an avid lover for gaming, he is constantly expanding his library with console, PC, and VR games. He's obsessed with stealth games and loves hunting down the smallest of details inserted by devs.
Related Articles: Population: One
Share
Tweet
Share
Submit