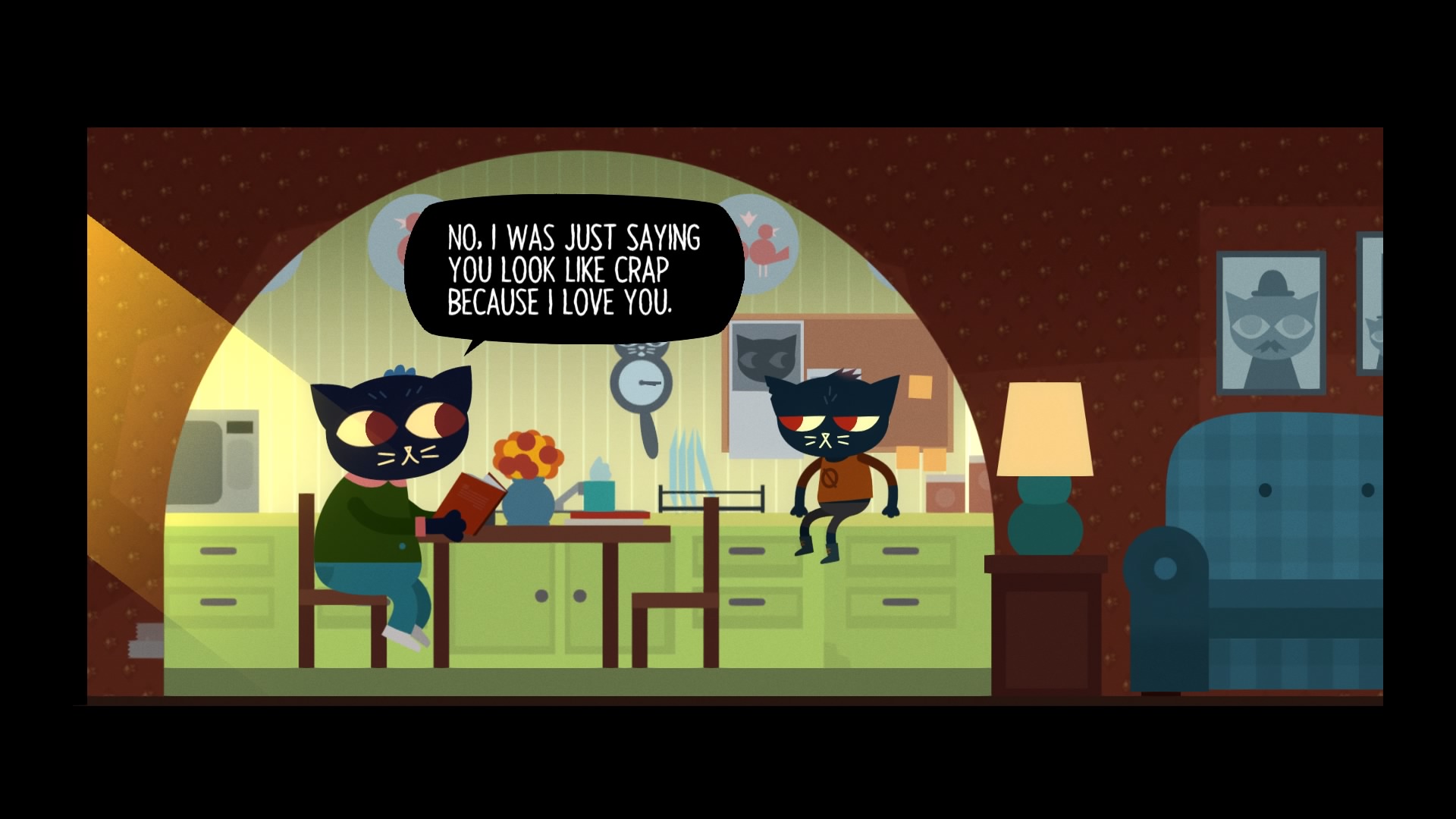 Growing up is hard. There was once a popular thought among teenagers that your growing will end when you become an adult. Of course, this is a common misconception. We’re always growing, and Night in the Woods shows just that.

Night in the Woods, developed by Infinite Fall, is a different kind of beast. It’s an adventure game, but stylized as a 2D platformer. You play as Margaret “Mae” Borowski, a 20 year old recent college dropout returning to her hometown after 2 years abroad. When she returns home, her town, as well as her friends, have changed. You explore the town, jump on homes, wires, talk to people and discover a dark and sinister story lurking in the woods.

As you’re exploring the town, you have the opportunity to talk to your neighbors. This is, for the most part, optional in your adventures. Several neighbors have subtle story arcs that you can delve into if you return to talk to them the following day, like a bear that recites poetry or a pastor bird that talks to you about God occasionally. As you’re mingling, you will sometimes be given a choice of what Mae will say. Choosing your words often leads to hilarious outcomes and may even be mentioned later on in the story. If you accept your mother’s invitation to eat tacos with the family, Mae will later mention to herself something about her “taco breath” while she’s getting ready for a party. While talking to your neighbors can be fun, the heart of the town lies within your friends.

While you were gone, life continued on for your friends. They started working and continued their band, but more importantly, they grew up a little. However, they’ll still remember you, even if you, the player, have no idea who they are. When you meet Gregg, one of Mae’s best friends, for the first time, there is a warm-fuzzy felling you’re given similar to seeing a long-time-friend. I didn’t know who this guy was, but Mae does, and more importantly, I like this guy.

Gregg isn’t the only likable friend of the bunch. Throughout the story, you are re-acquainted with several old friends, each bringing their own layer of depth and development to your story. For example, when you first meet Bea, she seems cold and distant towards you, but as the story progressed, I found Bea to be one of my favorite characters thanks to her subtle character development and motives for her actions. Fortunately, you have plenty of opportunities to hang out with either Gregg or Bea to catch up on what’s happened in Possum Springs since you left.

However, shortly into the game, Night in the Woods is going to ask you to choose who to hang out with each night. If you want to experience both Gregg and Bea’s storylines, you’ll have to play through the game at least twice. While there aren’t “multiple endings,” how the story flows changes slightly and you’re given more backstory into whichever characters you choose to hang out with. If you hang out with Bea the first night you have a choice and then with Gregg the second night, he will give you important plot details he would have told you the first night when it’s relevant to the situation for the second night.

And that’s one of the ways Night in the Woods shines. In many games focused on narrative, the exposition is handed to you in an unnatural way; however, here you have to earn that. Characters will drop vague, but realistic references to events that you, the player, didn’t know happened. Only when you have some of the pieces do the backstories begin to make sense. In a way, it was a smart design choice to have you play through the game twice if you wanted to see everything. By knowing what happens at the end of the story does everything in the beginning make sense.  Your reaction goes from “huh, interesting” to “oh! So that’s why…!” Playing through a second time builds depth to the game’s world, allowing you to fill in more of the story.

It’s the small touches that builds up Night in the Woods. Throughout the town are people waiting to talk to you, or to be eavesdropped. Almost every piece of dialog can only be read once. While some may see this as an annoyance, this helps build the town of Possum Springs up in a more realistic way. You’re living Mae’s life, and in reality, you cannot undo the choices you made. Mae’s choices in words are final, even if they are minor. (You are, however, given the option to reload.) There are several points where the animation in the game has a few more frames than is required, whether it be Gregg throwing a light fixture up for you to hit, or another character dancing. Sometimes, you may get into consequence-free mini-games, where your reward is the characters mocking you or praising you. These are both things that the creators didn’t have to do, but I love the attention to detail they have included in these brief interactions.

You know you’ve found something substantial when Mae logs it in her notebook, often in a humorous way.The art style is simple, almost like a pop-up book, but the characters lack defined borders you’d usually see in a 2D platformer. This allows Mae to blend into the environment more easily, or for the developers to play around with the lighting more effectively in the game’s more creepy settings.

And boy-oh-boy can this game get creepy. During the day, Mae is hopping around seemingly happily, but at night, her dreams are filled with cryptic messages and strange, unsettling imagery. The plot delves into even darker territory, but that’s best left as a surprise. The game knows that the player is expecting something creepy to happen at any point. The anticipation of, “is that mystery about to be solved?” urges you to keep going.

The dreams, unfortunately, are one of the games drawback, game play wise. In these sections, you have to find four musicians to get out of the dream. This is a small transition from one day to the next, but you cannot move on until you find them. Sometimes, you’ll be hopping along aimlessly because you’re unable  to find that last musician. Fortunately, the dreams are brief and can be completed within a few minutes, especially on repeat playthroughs.

But for every flaw this game has, it does many other things right. Night in the Woods tackles issues more realistically than I’ve ever seen done before in a game. Several of the characters, while functional, have definite signs of mental illnesses such as depression, bipolar disorder and dissociation. These problems aren’t the main focuses of these characters, it’s something you learn about them as you go on. The character isn’t a “depressed character,” they are a character with depression. Night in the Woods understands this and runs with it. Mae’s motives for leaving college may seem odd, but when you put yourself in her position, it’s easier to understand why.

At first glance, Night in the Woods may not look like anything special. It’s the little touches and the lovable characters that make it a wonderful narrative. Your choices aren’t very important, but they help you understand the characters better. If you’re like me, you’ll find yourself attached to the characters and even feel guilty if you hurt them in any way. And at the end of the day,  you’ll just want to give them all a great big ol’ bear hug.

Night in the Woods

Night in the Woods is a fantastic narrative with a beautiful artstyle, theme and plenty of small touches occupying a wonderful world full of loving characters covering a sinister story underneath.

Sean Anthony likes to combine two of his passions: gaming and writing. Gaming has been a huge part of his life ever since he played his first game as a child, Kirby's Adventure. He aspires to have his name attached to an article that makes the whole world go, "Huh, that's neat, I guess."
Related Articles: Night in the Woods
Share
Tweet
Share
Submit