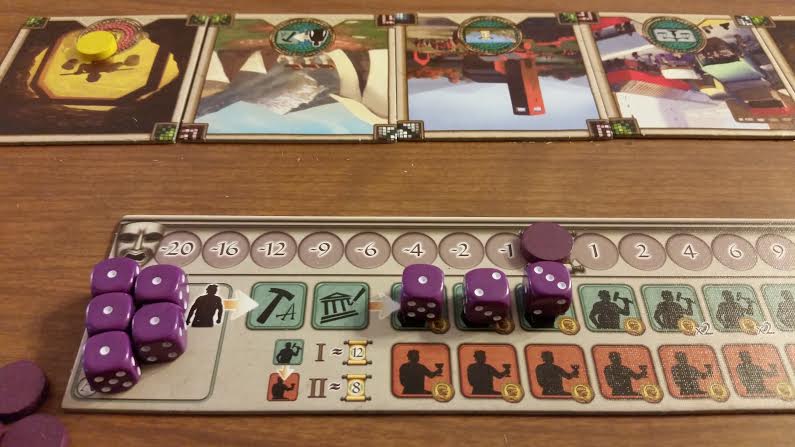 Romans usually conjure up images of gladiators, togas, and Julius Caesar. Often forgotten is how great the Romans were at building things. Sure, they gave us the Colosseum, but they also created roads that connected their empires and aqueducts that watered their cities. The master architects of the Roman Empire come center stage in Praetor where players compete for favor as they build a Roman town on the frontier between England and Scotland as Caesar Hadrian builds his famous wall.

As someone who loves chucking a bunch of dice, I was a bit disappointed to find out that I wouldn’t be throwing around all the dice, 40 in all, 8 per player. Instead, dice act as workers in the game with each pip indicating a worker’s experience. Every time a player is activated to gain resources or use a building, the player’s experience advances one level. The more experience a worker has, the better the worker is at a job. A level five worker would collect five marble at a marble resource tile, while a level one worker would collect a lone cube. At level six, the worker retires. This forces you to be careful with how you use your workers. As workers retire, you’ll need to replace them, but you need experienced workers to gain resources to stay competitive. Either way, all workers need to be paid at the end of the turn, even the retired ones! Figures the Romans would have a better pension plan than modern society. It’s a neat way to use dice and forces players to balance workforce and income.

Each player begins with three of these workers along with a gold mine and a handful of resource cubes. Players then take turns either building new tiles for the town, activating tiles already built, or helping Hadrian build his wall. Seven well illustrated pages set up the game quickly. It’ll take you longer to set up the game than it will to learn up.

Of the three actions each player can take, the early game will involve some building. The meager beginning resources won’t last long, so resource tiles become targets early. When a player buys a tile, he pays its resource price. This can involve using a number of your resource cubes which represent the wood, marble, stone, and weapons to build and protect the Roman frontier. Players also receive the favor value listed on the chart. Resource buildings tend to give a few, while temples and monuments can really impress the Caesar. Once built, the player decides where the new tile should go in the city, but first, the player must perform a poorly executed mechanic. On the corner of each tile is a pattern. These patterns represent plazas located between the buildings in the city. By matching tile patterns to previously placed tile patterns, players can score one to three more favor points on top of the value of each tile. This really adds nothing to the game at all other than to annoy any OCD player that sees tiles turned in every which way. Instead of a glorious city worthy of the Roman Empire, the players end up throwing a helter-skelter town together. The bonus points are of such little consequence to end game scoring that it’s puzzling why this feature was included at all.

After that, the player places his or her colored marker indicating ownership of that city tile. From then on, each non-grey tile can only be activated once per turn. Anyone can activate the tile, but the owning player may use the tile for free to collect resources or gain the tiles bonus. Anyone else wishing to use the tile must pay the owner a fee. Normally this a nominal fee of a gold piece, but some tiles are significantly more to use. One of the best tiles in the game allows players to bring a worker out of retirement to conduct one action. The owner can activate that tile for free and have a retired worked collect six of any resource, including gold. However, if anyone else wishes to use their tile it would cost them three gold. That’s a hefty price in a game where money is usually running low after paying your ever increasing workforce. Owning that tile can throw the balance of the game.

Workers rush to claim resources in the helter-skelter layout.

There are other tiles that can affect game balance as well, regardless of who owns them. The Temple of Plutus allows you to gain favor for each wood and stone you have in your inventory. Even though the updated version has this capped at 22 favor, it’s still a lot of points to be able to churn out each turn. Players are then encouraged to block each other and try to prevent their opponent from cashing in on the valuable temple tiles. This can be offset somewhat if all the temple tiles end up getting placed, but it really leads to my biggest problem with the game.

There’s no cooperation in this game at all. None. The back of the box and information for the game talk about how players will cooperate to build a marvelous Roman city. Yet, there’s no cooperation at all. Sure, other player may build tiles that you’ll need to use, but that’s part of the game. It’s not cooperation. You never share resources. You can’t trade resources. There’s no incentive to build Hadrian’s wall to completion. The game has you go through the city tiles deck as a game’s timer, but there’s no way to lose the game if city isn’t built. Opponents are nothing more than an annoyance, blocking you from using resources or earning favor. Everyone ends up building their own parts of the city without the help of others. Like the helter-skelter tile placement, the game feels sloppy and disjointed at times.

Despite all that, there is a halfway decent game in here I did enjoy. The worker placement using dice is very effective. The tiles’ illustrations really give the game a great Roman feel, and as the city gets built, interesting decisions must be made on how to continue to pay your workers, gain your resources, and expand your favor. For all of this to come together, it would take players willing to enjoy the experience. Once anyone tries to exploit some of the game’s more powerful tiles, the game will delve into a bitter game of tile blocking and resource hoarding. If a game ever needed a set of house rules, it’s this one, though the real shame is some of these issues could have been handled with better playtesting.

Praetor's pseudo cooperation game does have some interesting work placement mechanics and an engaging Roman theme. The good gets overshadowed by some quirky rules and tiles that unbalance the game. House rules are a must to eliminate exploiting the game's flaws.