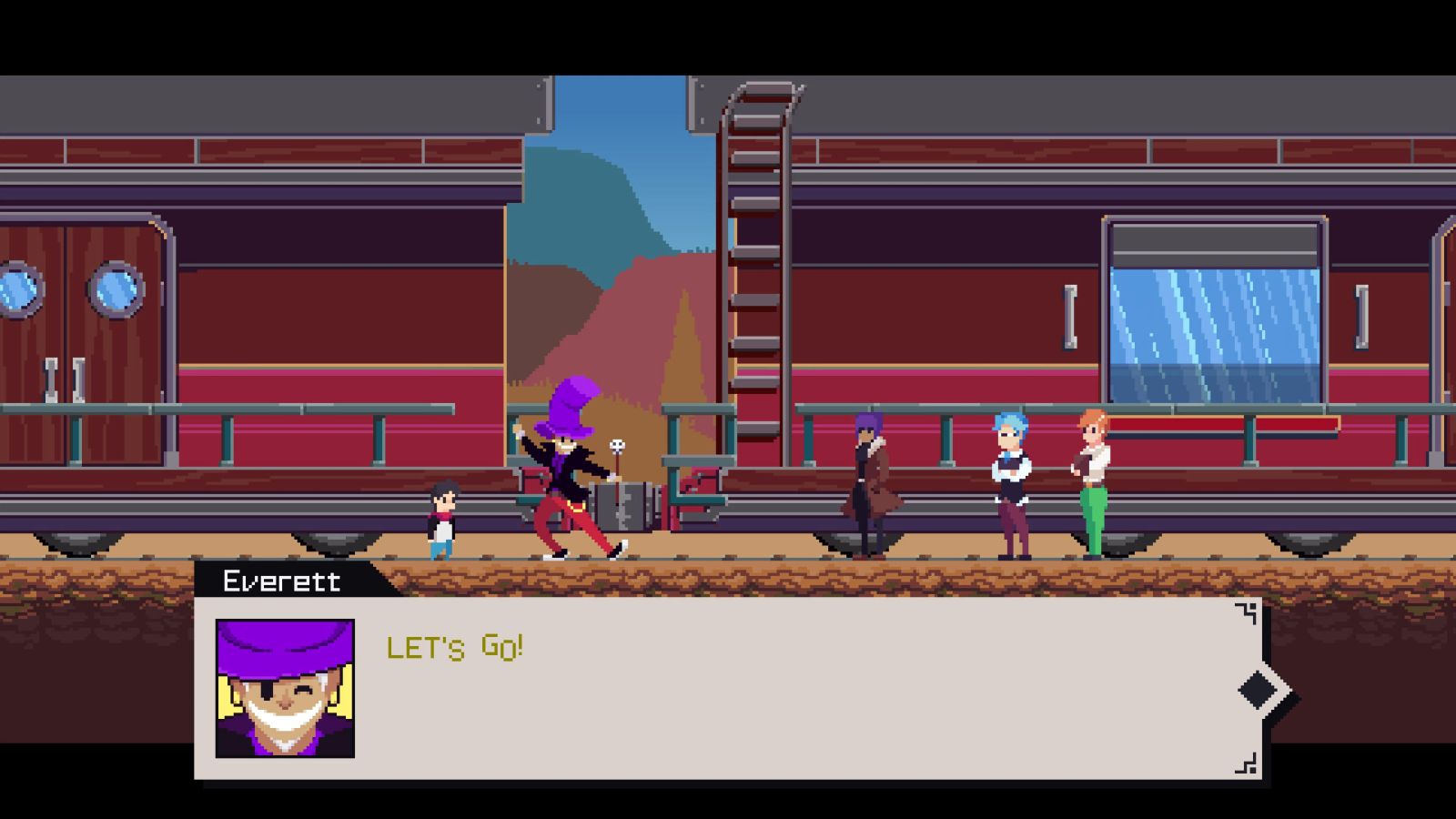 How people can still dismiss the video game medium as a valid means of storytelling is beyond me – video games have always told great stories, but throughout the past few years independent studios have really set the bar for the types of experiences the medium can convey. Unique stories complemented by equally creative gameplay have become the norm and What Lies in the Multiverse, a new adventure from developer Studio Voyager and publisher Untold Tales, continues this tradition by providing a hilarious, poignant, and surprisingly dark tale all told through gorgeous retro sprites and set in a world filled to the brim with creative puzzles to overcome.

The premise is simple: players take on the role of an unnamed kid who, bored with his current life, has spent countless hours attempting to unlock multidimensional travel. He succeeds but is quickly brought back home by a sarcastic and slightly egotistical scientist named Everett, who explains that multidimensional travel is dangerous and can destroy the natural fabric of time, creating countless issues throughout multiple universes. Despite this, Everett himself is on a quest to uncover clues as to the whereabouts of his missing partner Ez and is using a highly dangerous Voyager stick – capable of multiverse travel – to uncover the truth. The kid quickly convinces Everett to allow him to tag along as his assistant and off the two go in search of answers. Their universe hopping garners the attention of a group of individuals who become determined to stop the duo’s exploits. What follows is a frantic, hilarious, and often thought-provoking adventure through multi-universes. 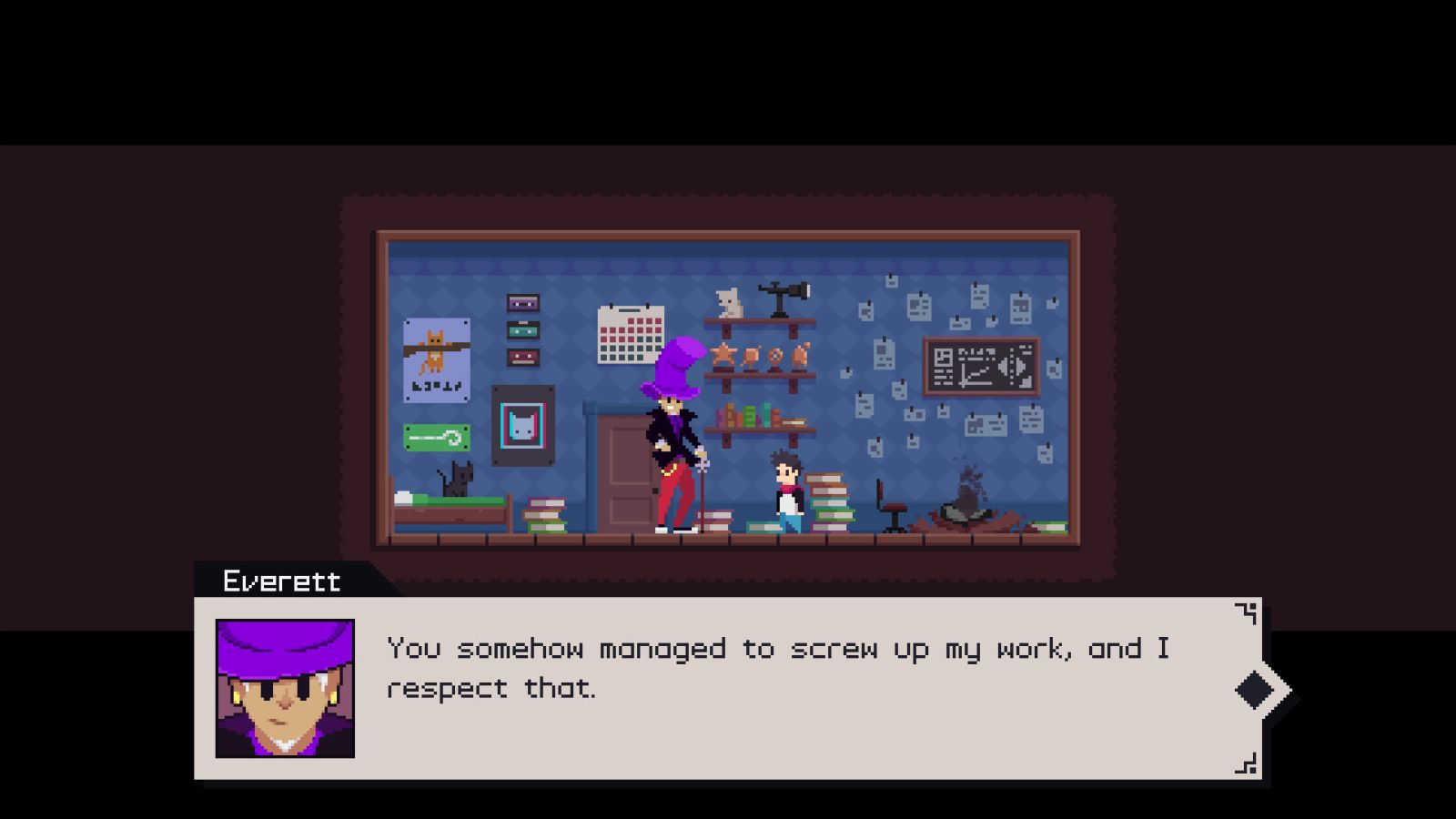 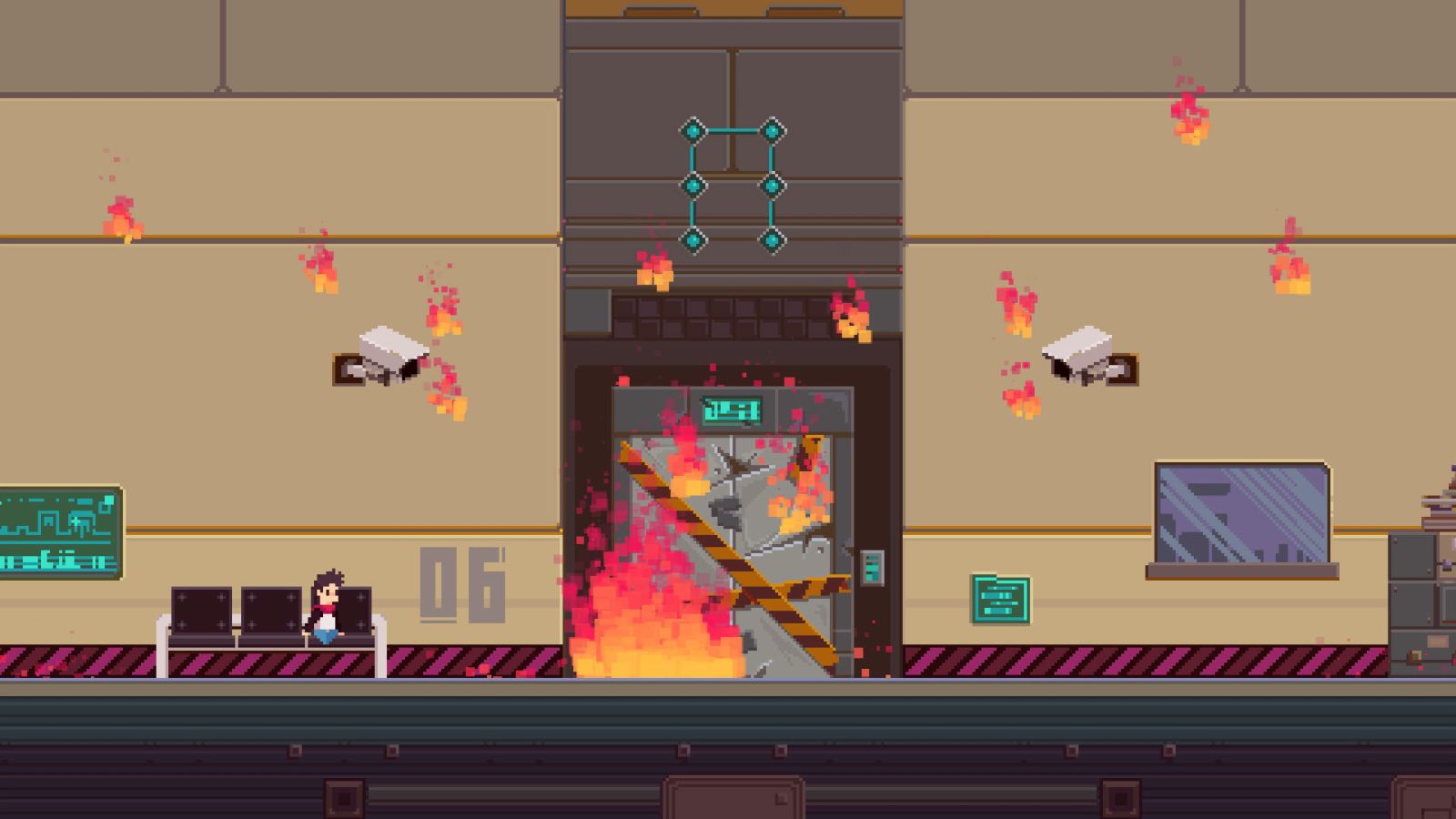 The premise is simple but provides a great backstory for universe hopping shenanigans. Everett, always lazy, transports the duo to new areas only to then warp himself ahead to the nearest town and leave the kid to explore. Playing as the kid, players will have use of the Voyager to quickly swap between two universes, necessary to explore each level and uncover its secrets. There are no enemies to speak of, rather the game’s only obstacles are the puzzles scattered throughout. Locked doors, tears in the universe, poisonous air, overgrown weeds, and countless other obstacles will block the kid and only by swapping between universes will he be able to overcome these obstacles.

The universe swapping mechanic is unique and highly fun to mess with. By simply pressing R2 or L2 you can swap between universes, often showing a universe in its prime and bustling with NPCs to speak to, to a world where often everything good in the previous world has now been destroyed – including finding piles of bones of all the people you had previously spoken with. The stark contrast between these universes is always a joy to explore, and each universe will have areas and items not accessible in the other. Swapping between universes on the fly is a must and players will quickly find themselves having to swap between worlds rapidly to accomplish some of the more difficult puzzles.

Each level features a new mechanic to master, with the kid having to navigate alternate universes with no gravity, poisonous air, overgrown foliage, and even areas where the use of multiverse travel is disabled forcing the player to jump through ubiquitous spots which swap between the worlds instead. The latter levels provide much of the game’s difficulty, as they require skill to navigate and sometimes require some truly clever multiverse maneuvering. Still, the puzzles are rarely hard, and most can be solved with a few minutes of experimenting. There is no penalty for death, and in fact – it is almost expected as you receive achievements nearly every time that you figure out a new way to die. 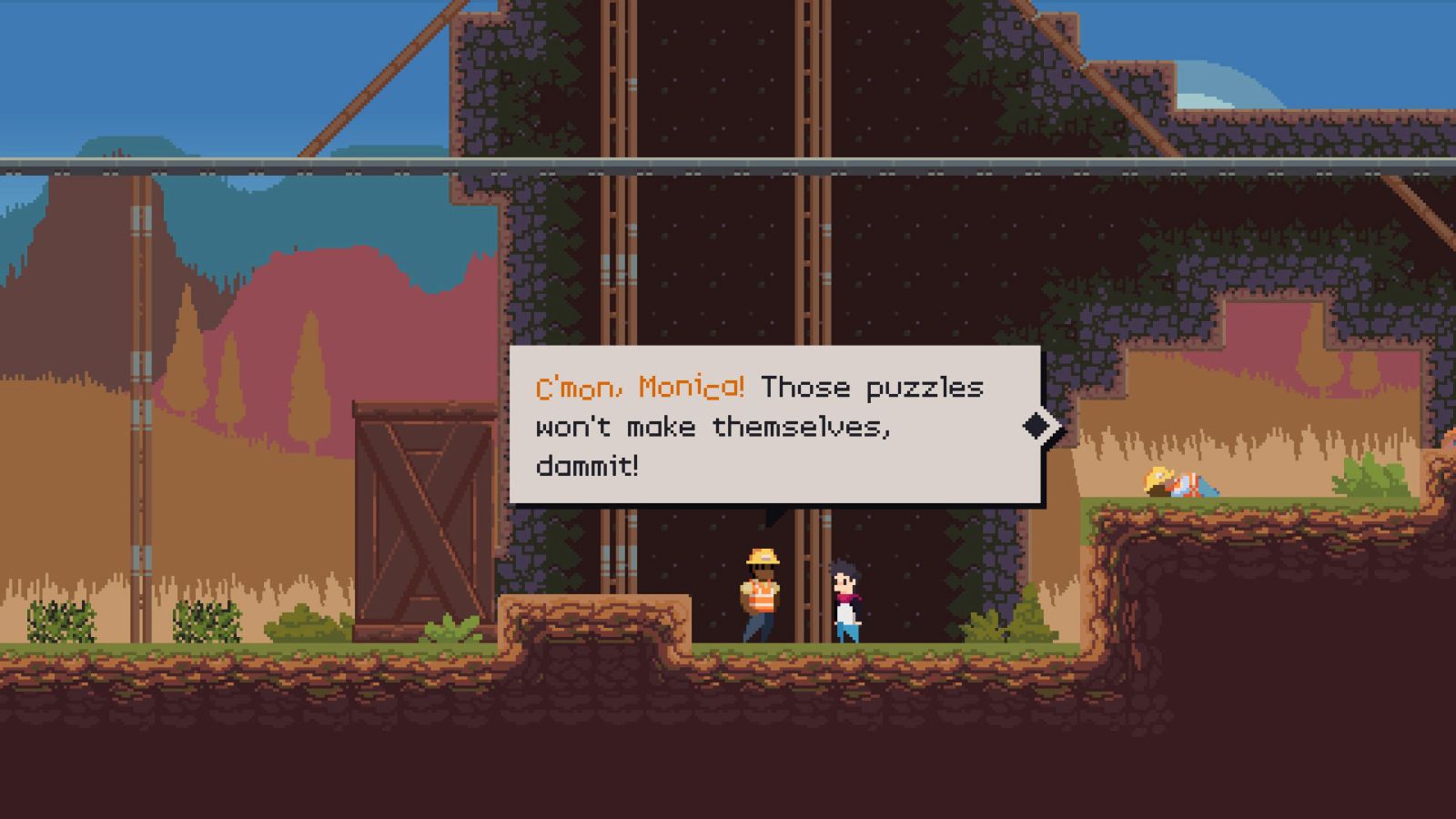 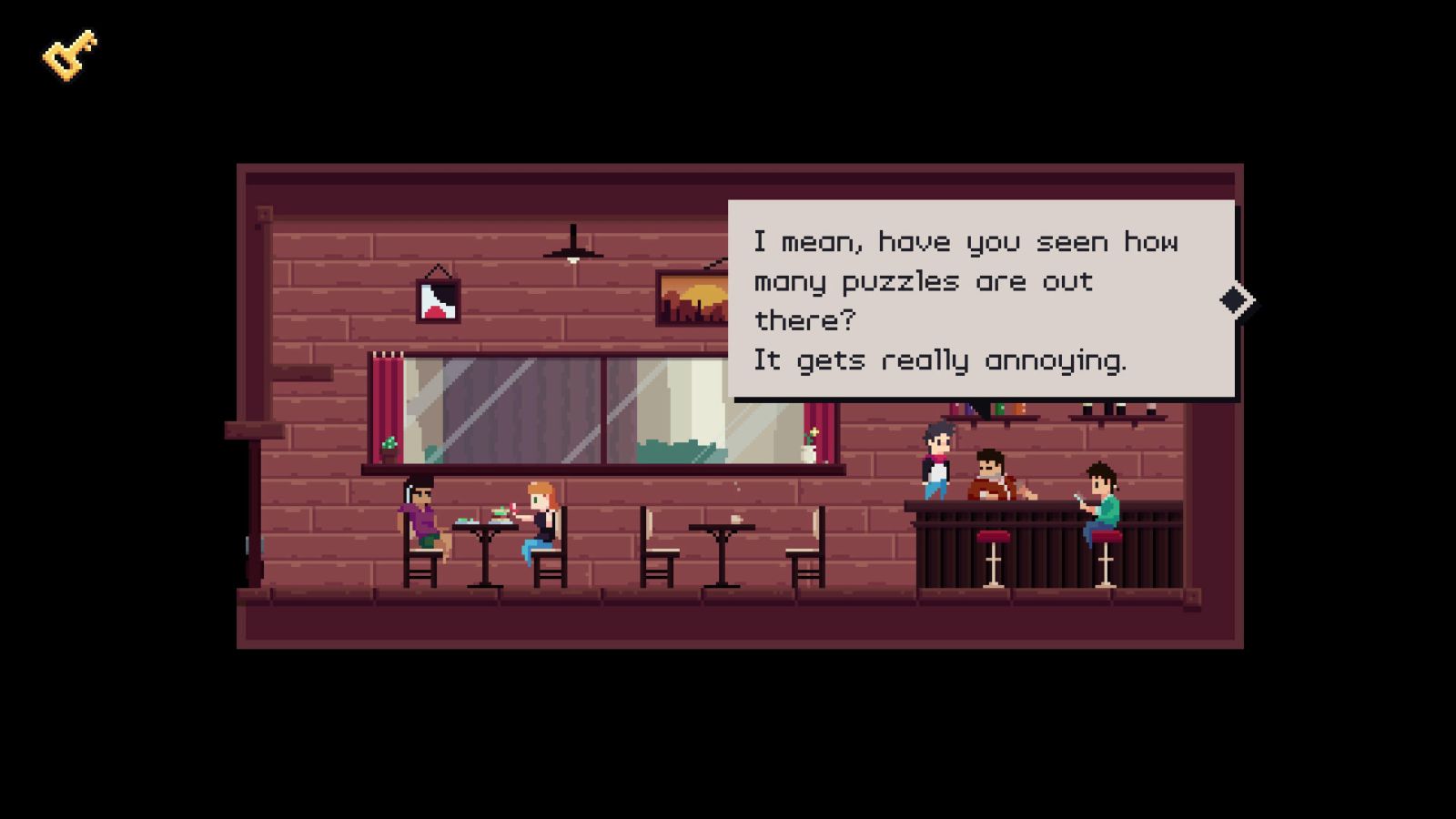 Humor is a constant through What Lies in the Multiverse, with the game rarely taking itself seriously, at least until the end approaches, but the game does teeter into some shockingly dark moments as you travel between worlds and figure out what became of the once happy people that inhabited the area. Most characters are sarcastic, and the game spends much of its time making fun of itself, going so far as having characters complain about the work required to create puzzles for no reason and making fun of the fact that someone put up locked gates in the middle of the forest. My favorite scene involves Everett and the kid walking into a room full of obstacles to overcome and Everett telling the kid how hard it will be to progress. After you take a few steps Everett yells that he found a shortcut and you immediately bypass everything. It is all very charming and clever.

What begins as a hilarious journey through the multiverse, becomes a much more somber tale as you uncover new details about Everett, the individuals chasing you, and Ez. The game begins with a warning that explains that the story deals with heavy themes and warns those who may be triggered by certain parts of the story to be wary of continuing. Whether or not some of the themes may bother you is up to the individual player, and normally I’d be surprised by the fact there is a warning at all – but due to the seemingly light-hearted nature of the game and promotional materials, I believe the developers wanted players to understand what they were walking into. 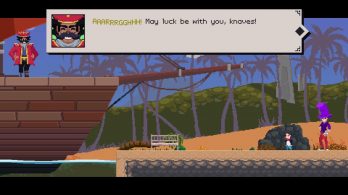 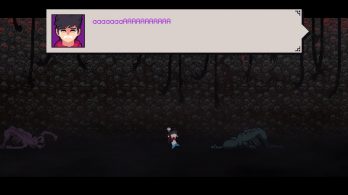 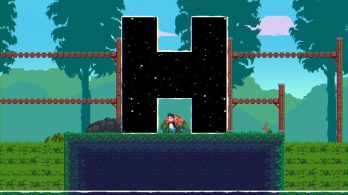 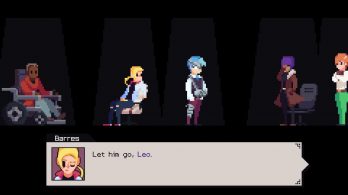 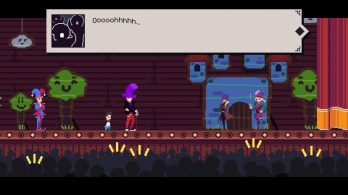 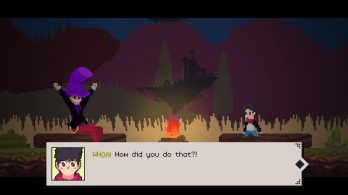 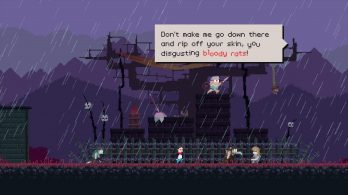 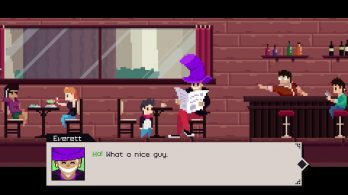 What Lies in the Multiverse uses its world jumping to its advantage, providing a large variety of locales to explore and scenarios to thrust the duo into, including hiding out on a train, becoming an actor in a play, scavenging a labyrinthian mansion, escaping a high security facility, climbing out of a city overgrown with weeds, and more. For a game that is only 6 hours or so long, there is an awful lot of diversity on display.

The constant onslaught of puzzles does get a bit repetitive, mostly because you do become invested in the story and would rather see how it plays out than find another key to unlock yet another door. Still, due to the relatively short campaign and constantly changing situations this rarely becomes a real issue.

What Lies in the Multiverse

What Lies in the Multiverse is one of the most unique puzzle/platformers released in recent years. Featuring gorgeous pixel-based graphics and a charmingly self-aware sense of humor, the game constantly throws a variety of new set pieces and obstacles at you and continues to find clever ways to use its central universe swapping mechanic. Despite some unexpectedly dark undertones, the game remains mainly upbeat, telling a story that deals with loss, friendship, and life in a surprisingly mature way. What Lies in the Multiverse is well worth picking up for fans of puzzle based games.

Richard Allen is a freelance writer and contributing editor for various publications. When not writing for Gaming Trend you can find him covering theatre for Broadway World, movies and TV for Fandomize, or working on original stories. An avid retro gamer, he is overly obsessed with Dragon's Lair. Chat with him via @thricetheartist on Twitter and @richardallenwrites on Facebook and Instagram.
Related Articles: What Lies in the Multiverse
Share
Tweet
Share
Submit