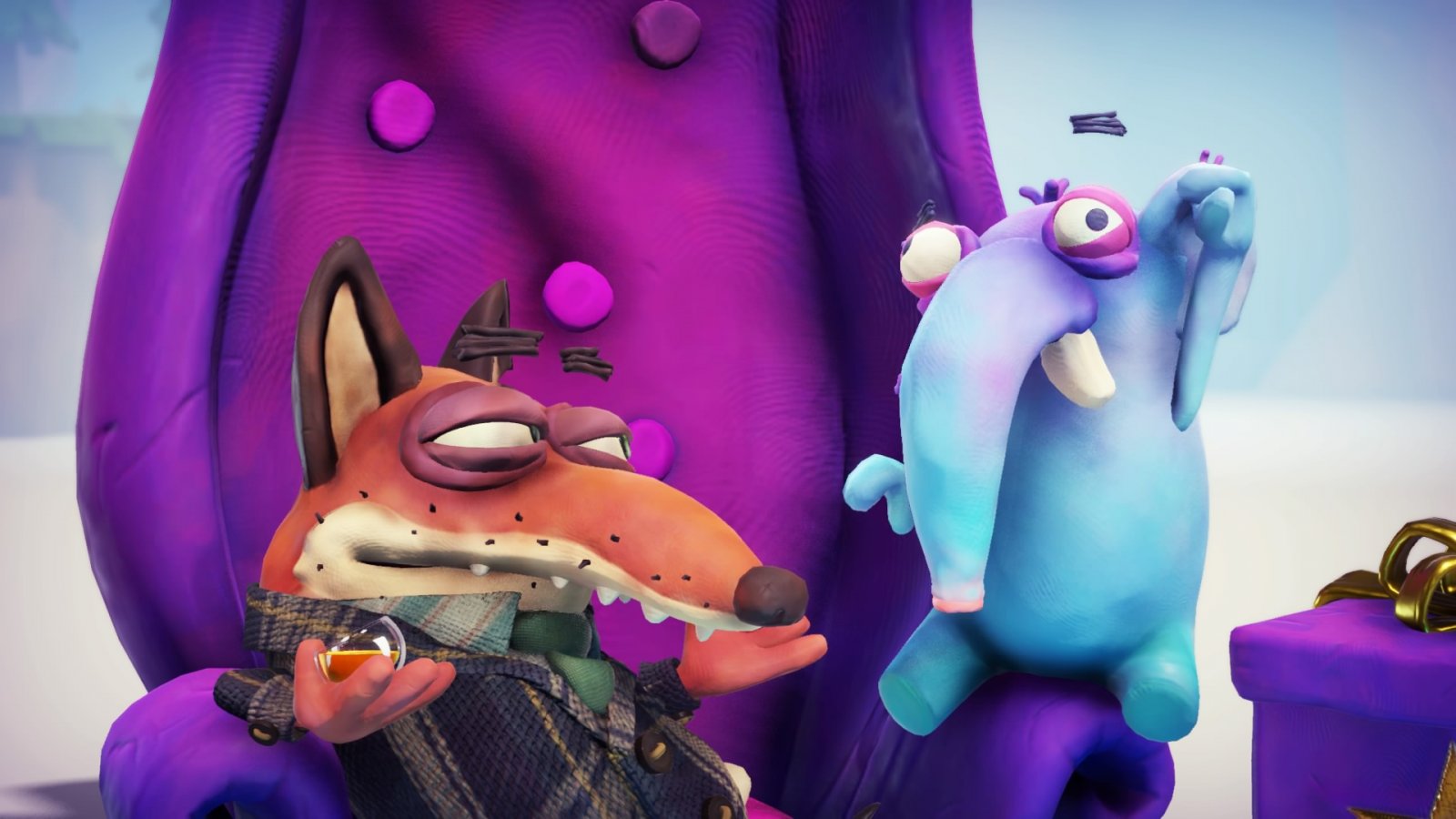 Grab your phone or tablet and get ready to play some minigames in the PS4’s newest addition to the Playlink collection: Frantics. As with the other Playlink games, you must download Frantics’ companion app in order to play, but it only takes a few moments and you’re ready to go.

Frantics is hosted by a suave fox who will be your guide as you and your friends go head-to-head in the title’s 14 minigames. There are three main ways to play: you can play each game individually, play a custom session of grouped games, or a set of minigames known as the fox’s party, which is the most fun experience. The fox’s party involves the players being put through a series of randomized minigames. Each game is broken up into rounds or a time limit; points are awarded to the winner of each round, and in some cases, a lower number of points are given to runner-ups. After the rounds conclude or the time limit ends, whichever player has the most points wins that game. The winner gains a crown that they wear and crowns stack as you win more games.

Before jumping into the mode of your choosing, you are asked to take a selfie. Once you’ve done so, the game matches you up with one of the animal avatars and you are given a chance to name yourself. This prompts a crate to drop down in the menu and you must shake your device in order to open it. This reveals your animal and you can shake your device even more to alter the body of your animal. It doesn’t affect anything gameplay-wise; it’s only meant to add to the goofy visuals.

You can play Frantics with up to four players, so it’s fun to get a group of friends together to join in. Unlike some other party games, you don’t necessarily need to have friends show up so you can play. If you want to go solo, the fox will make a comment about how the game is better with friends and then offer up two of his animal pals to join you. This is a nice touch as it allows even a lone gamer to experience the goofy hijinks of Frantics.

Frantics offers an interesting variety of games to play, including races, battle royales, a version of chicken involving pulling your parachute at the last minute, and more. There’s nothing particularly game-changing about them, but they are still a joy to play. Some of my personal favorites are Friendless Runner and Chair Riots. Friendless Runner has the players running away from the screen on a track split up into multiple lanes. You must swipe your device’s screen sideways to change lanes and avoid obstacles or upwards to jump over them. Each player has three lives, and if they make it to the goal, they are awarded points based on how many lives are left.

Chair Riots is a fun twist on curling; the players take turns trying to launch their animals on the track towards a target. The closer to the center you get, the more points you’ll earn. After you roll into place, you can tap a button that shows up on your screen to bounce a little and move more in the direction you’re facing. This can help you move closer to the center or even just push other animals out of your way. If that wasn’t enough, before each round, every player is given the opportunity to place a spring trap somewhere on the track. The traps are invisible, so remember where you placed yours and aim carefully.

As you play the minigames, there are coins that you can collect by running into them. These coins are used for the auctions that can take place in-between rounds or games. The auction will provide several items that the players can bid on. Each player chooses an item and how much they wish to bid. These bids are hidden from everyone else until the entire group has finished selecting. Whoever bids the highest gets that item for the next round. If you are outbid, you may be given one of the ignored items in exchange for your bid, although you get no choice of the consolation item. Items can include a parachute that opens instantly, a hat that doubles points earned, or even a bomb defusal kit. There are a variety of items possible based on a specific minigame, so you’ll have to choose wisely in order to gain the best advantage. That being said, you don’t have to bid on anything if you don’t want to, which could be a strategy if you want to save coins. The coins can also be saved on the off-chance you are given the opportunity to buy more crowns for yourself in a special auction. Crowns are important because they affect the final results of the fox’s party.

In addition to the auctions, the fox may occasionally call one of the players to give them a secret mission. He will prompt the designated player to look at their phone as he gives them a special task for the next game. If that player completes said task, they will be awarded either bonus coins or a crown. If that call comes in, watch out for that player: The fox could want them to collect the most coins in the next game or even ask them to help another specific player win the next game. This is a clever way to add an extra twist to the already hectic gameplay. You’re already facing off against your friends, but that added secrecy makes things get a little more intense.

The fox’s party works its way towards a grand finale minigame, which is where the crowns come into play. Typically the amount of crowns you’ve earned equal the amount of lives you are given. This gives a good advantage to the players that have been winning the previous games. Even though this is the case, it doesn’t necessarily mean that those players will win the entire game. This is refreshing, as it offers unlucky players the chance to step up and claim victory for themselves and you can become a true underdog and prove yourself at the very end. When the final battle is won, the victor is praised by the fox and a random item is obtained for future use. These items are purely for the sake of fashion in later parties. For example, I earned some sunglasses and a cowboy hat. Now you’re ready to take on another set of minigames in style.

Frantics is a nice addition to the Playlink family, allowing friends to get together and play minigames by using their phones. There is a good variety of games, although more would make it better. Plenty of fun twists such as the secret missions, traps, and auctions add to the experience.

Codi loves to play video games and watch movies. He will watch almost any kind of movie just to experience them. His ideas take inspiration from the shows and movies he watches, and games he plays. He also loves a good pun.
Related Articles: Frantics
Share
Tweet
Share
Submit