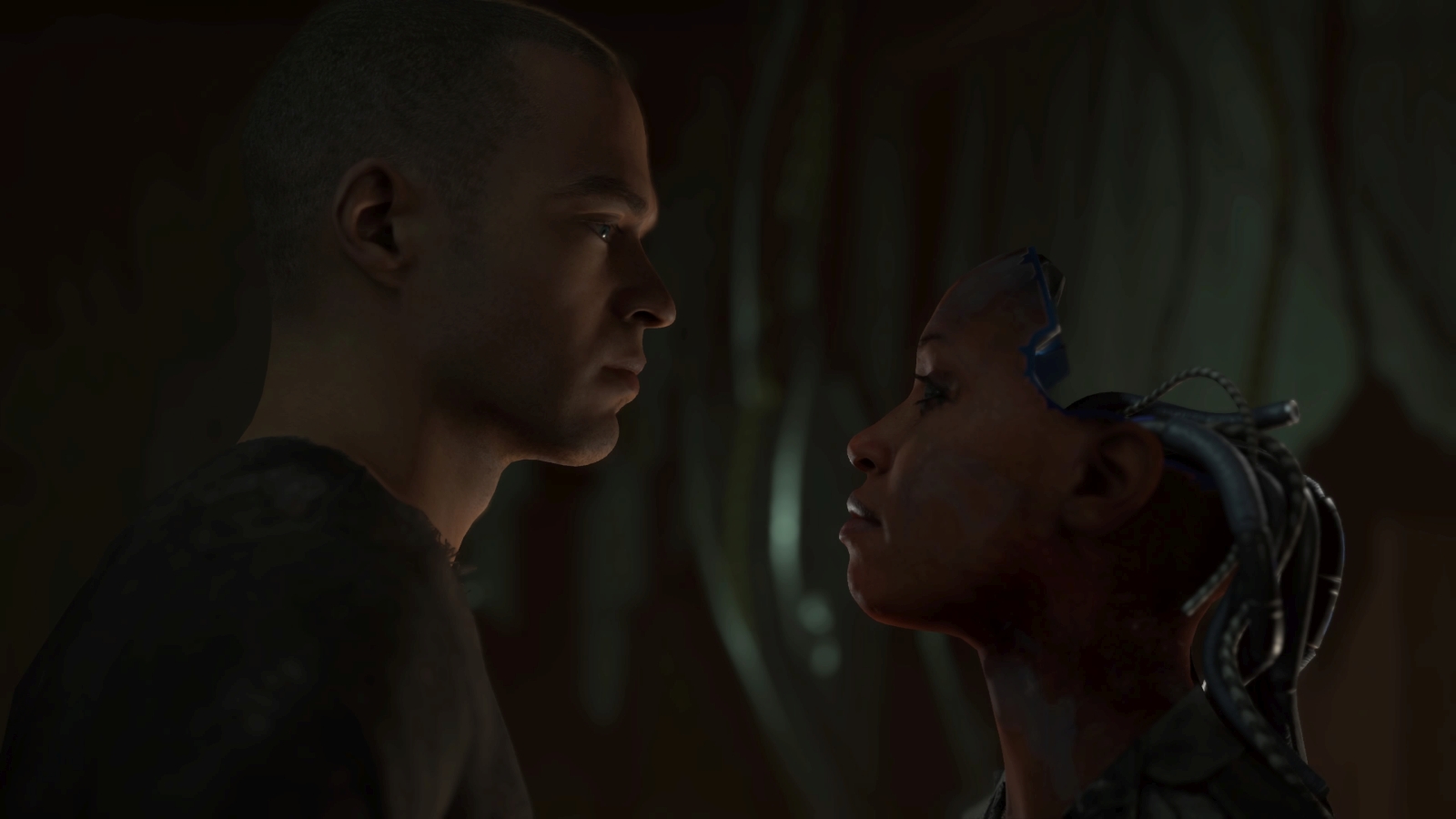 What does it mean to be alive? — Detroit: Become Human review

Freedom. It’s a funny concept that can mean a lot of different things, based on your perspective. For those that have grown up in the United States, it’s even something that you might take for granted as you’ve never known anything else. As the world advances, and robotics reach the point where androids could conceptualize things like fear, anger, resentment, and even self-preservation, where does their freedom start and end? Should they be afforded rights? Should they have freedom? Free will? Detroit: Become Human explores these, and many other morality concepts in what is easily the best game Quantic Dream has ever made.

Developer Quantic Dream has made five games, and all of them have similar themes. They challenge the status quo of conventional storytelling, asking the player to make choices based on their own morality, and they offer no judgement for choice beyond consequences. Their interactive dramas are filled to the brim with famous actors, tough choices that have to be made under the pressure of a timer, and some of the best motion / voice capture in the industry. David Cage and his team have outdone themselves with Detroit: Become Human. Where Beyond: Two Souls often felt disconnected, its narrative unfocused, Detroit’s narrative is tight and cleverly interconnected. As such, I’ll be purposefully vague so as to avoid spoiling any of the story in this review beyond the first few minutes of the game, which you can see below. What makes this game different than previous efforts, however, is that the choices I made created my outcome — your outcome is likely to be very different.

As you can see, there are more organic choices than Heavy Rain or Beyond: Two Souls had to offer, and they feel far less binary. After every mission, you’ll be presented with a timeline that shows you where your story might have diverged, had you chosen differently. This decision tree is straight out of a design playbook, but here it’s part of the game itself. It encourages you to go back and experience other outcomes, or even different paths to the same outcome. There is even a percentage associated with the timeline, so you can know how close you are to discovering all of the options. There is no “good” or “bad” choices here, simply options with outcomes. It’s often not immediately clear which decisions will have lasting outcomes until you are far further into the storyline. This encourages replay as it’s impossible to see all of the choices in a single playthrough. The developers estimate the game will take roughly 40 hours to see everything, and from my multiple playthroughs of the game, that’s easily true.

There are a wealth of choices, each with multiple outcomes, some of which arriving much later.

There are two difficulty levels in Detroit: Become Human — Casual and Experienced. Experienced is essentially the “normal” setting, offering the full gamut of motion controls supported by the PlayStation 4’s Dualshock controller. This means hitting a face button at the right time to land a jump, pull the thumbstick in a direction to dodge an incoming punch, and sometimes pressing multiple buttons and moving the stick at the same time. Casual, on the other hand, is tailored for people who aren’t necessarily gamers, but who want to experience the storyline. The button presses have longer timers, and they are far less frequent. You can change difficulty levels mid-game, so handing the controller to my casual gamer wife was as simple as a difficulty toggle.

Outside of the action sequences we’ve come to expect (Press X to not die, and other quicktime event types), there are now decision-driven computational choices. As you’ll see below, you are given a moment to assess multiple approach angles, rewinding and fast forwarding through the results of that potential choice until you’ve found the correct angle or approach to an obstacle. This preconstruction of a path reminds me of elements out of Remember Me from DONTNOD — one of my favorite cyberpunk titles, and these serve as a highlight to the game.

The storyline of Detroit: Become Human isn’t centered around a single character, instead splitting time between three android protagonists. Kara is a homemaker model android, responsible for cooking, cleaning, and other domestic duties. Markus is a servant to a wealthy painter, acting as elderly caretaker and companion. Connor is a prototype android detective, meant to understand and track down “deviant” androids — androids that have deviated from their prescribed programming, often with fatal results. Each sequence tells a portion of their story, slowly converging the storylines until they eventually intersect. It’s not unlike the storytelling methods of shows like Game of Thrones, or Westworld.

Throughout the story, your decisions will affect the relationships of those around you. Making the right call might make someone trust you, and that trust may uncover additional choices and outcomes. There’s also an overall sentiment towards androids by the general public that, in the latter portions of the game, you can influence both directly and indirectly. These can have wide and sweeping consequences that could ultimately lead to the death of main characters and those that surround them. Thankfully, this isn’t a meter you’ll overtly have to manage against, instead adjusting organically based on choice.

One of the carefully positioned narrative elements I enjoyed in Detroit: Become Human is one of its most subtle — the way humans refer to androids. If you look at the subjugation of human beings of any type throughout history, it starts with simply dehumanizing them. Here, androids are referred to as “it”, and never a pronoun of any kind. Even after saving the life of a particular human being, he was unwilling to say thanks directly (or it could be a consequence of my choices, which is equally as exciting!). It’s this simple dialogue choice of never giving the androids a sense of humanity that makes the moral choices you make when you see them being abused that much more impactful. It also raises the central question of which the remainder is wrapped — what does it mean to be human? It never does answer this question, instead granting all of the levers of choice to players to answer it for themselves, and it does so in a far less binary way than what we got with Beyond: Two Souls.

There is a fine line when you offer up timed dialogue choices of just how much you want the player to read. There were times in Detroit: Become Human that I found myself saying the exact opposite of what I intended because the dialogue choice inferred something different than what came out of my character’s mouth.

There are even impactful choices in a chase path.

To sell the story, the team at Quantic Dream employed an all-star cast. Jesse Williams (Cabin in the Woods, Grey’s Anatomy), Valorie Curry (House of Lies, The Tick), and Bryan Dechart (True Blood, Jane by Design) turn in stellar performances as Markus, Kara, and Connor, respectively. They are joined by highly-recognizable actors and actresses such as Minka Kelly (500 Days of Summer, Almost Human), Clancy Brown (Starship Troopers, Highlander — and yes, there’s a Highlander easter egg in the game regarding immortality), Simbi Kali (We Were Soldiers, 3rd Rock from the Sun), Amelia Rose Blaire (True Blood, Scream: The TV Series), and Ben Lambert (Zero Dark Thirty, Harlots) are just some of the excellent supporting players in what can easily be called a narrative movie. Similarly, Dave Foster and his orchestra provide an excellent musical backdrop, providing the cinematic score the game needs at just the right moments. If this game doesn’t pick up a U-Haul full of awards for visual and audio direction, there is no justice. As an added bonus, you’ll earn points through natural play that can be redeemed at the main menu to unlock the soundtrack, artwork, 3D models and backstory, videos (including a making-of), and even a short 10-question survey about your personal feelings about robots. Seeing how the world will respond is a fun leaderboard-esque bonus.

I did run into a few visual hiccups with Detroit: Become Human. One tense moment where I was being held at gunpoint lost some gravitas when the gun was embedded in the users hand instead of in it. Occasionally there are some very ugly mip-mapping moments (where the game shifts from low visual quality to high as things load and get closer to the camera) where textures pop into the correct level of detail. When the visuals are this gorgeous, it’s very easy to spot when they aren’t, but thankfully this is few and far between.

Yea…it’s hard to infer the gravity of the situation with whatever is going on with your hands, good sir.

What does it mean to be alive? — Detroit: Become Human review

Detroit: Become Human is a cinematic masterpiece, and easily the best work to date from developer Quantic Dreams. It’s gorgeous, sounds beautiful, and the choices made here are impactful and introspective. Better still, the exposed underpinnings encourage repeat playthroughs just to see where all of the rabbit holes go. Come for the storyline, stay for the thought provoking look at a potential near future for mankind, and where AI might fit within it.

Ron Burke is the Editor in Chief for Gaming Trend. Currently living in Fort Worth, Texas, Ron is an old-school gamer who enjoys CRPGs, action/adventure, platformers, music games, and has recently gotten into tabletop gaming. Ron is also a fourth degree black belt, with a Master's rank in Matsumura Seito Shōrin-ryū, Moo Duk Kwan Tang Soo Do, Universal Tang Soo Do Alliance, and International Tang Soo Do Federation. He also holds ranks in several other styles in his search to be a well-rounded fighter. Ron has been married to Gaming Trend Editor, Laura Burke, for 21 years. They have three dogs - Pazuzu (Irish Terrier), Atë, and Calliope (both Australian Kelpie/Pit Bull mixes).
Related Articles: Detroit: Become Human, Let's Play
Share
Tweet
Share
Submit