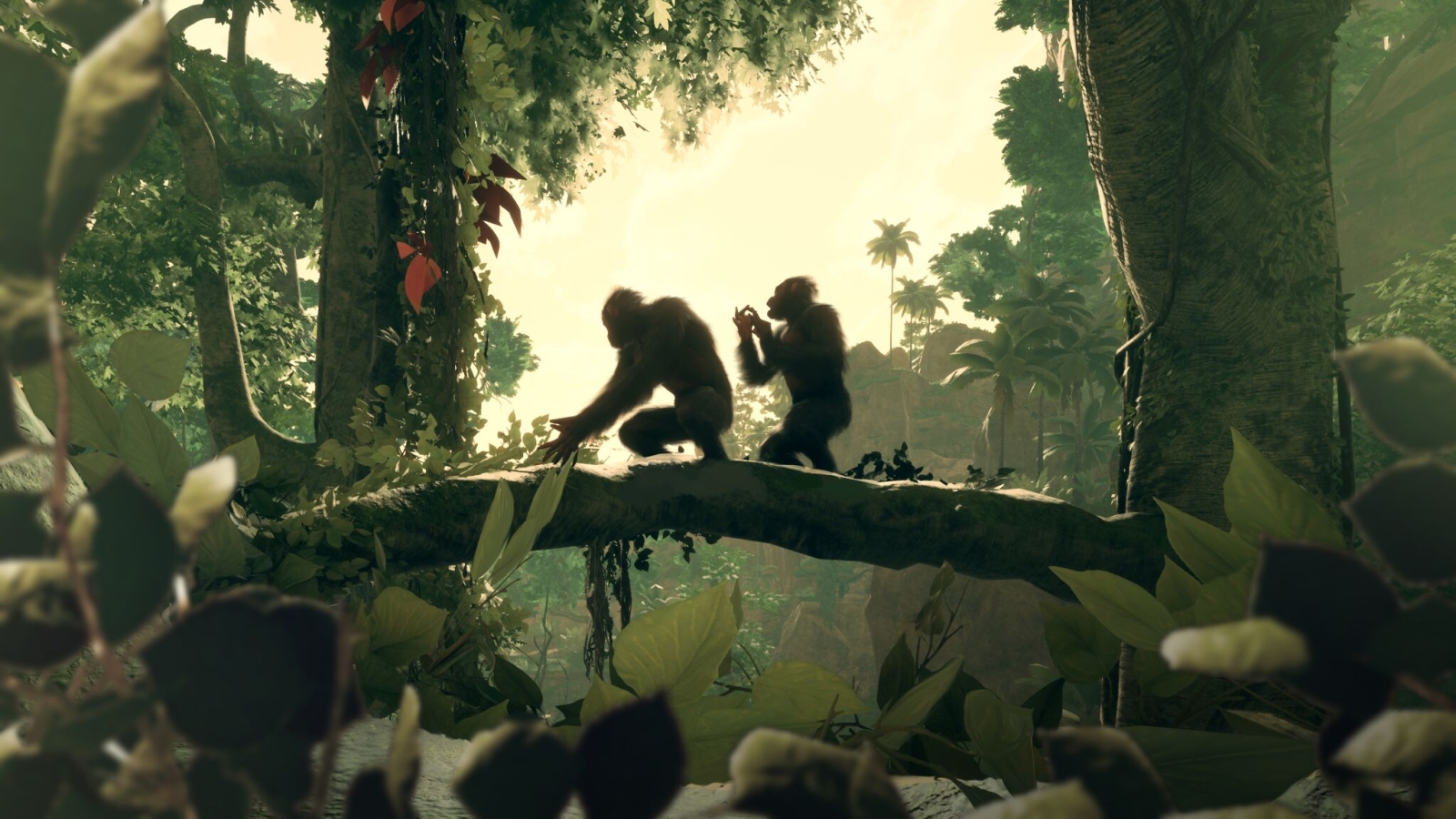 I really enjoy open world exploration and sim games, and Ancestors: The Humankind Odyssey by Panache Digital Games, was definitely something new that I had never seen before. It’s essentially an evolution game, where you start off 10 million years in the past as a baby hominid who watches its mother die savagely before its very eyes. You make your way back to camp, where all the other primates in your clan live, and then slowly but surely figure things out. The ultimate goal is to survive long enough to evolve from prey to predator.

This game does not hold your hand whatsoever. From the get go, you’re meant to figure things out on your own. There is no minimap or quest journal, just you and the jungle. You get a little tooltip at the very start telling you how to use your senses (hearing and smell) to check for predators, and also when you discover something new, but other than that you’re flying blind.

Once your baby hominid joins up with the rest of the clan, it’s relatively safe within the confines of their camp. The first hour or so you’ll spend learning how to drink, eat, and pick things up. You can play as any member of the clan, and easily switch between them. Once you’ve learned how to do something on one ape, they all learn that skill.

There isn’t much to discover in your first camp, but it is meant to give you the basics to build upon later. You’re playing here until you have learned enough to “evolve” your neurons so you can spend your neuronal energy in the game’s skill tree. Some of the first skills you will upgrade are the ability to call all your clan members to you, how to put an item you’re holding into your other hand, and how to interact with things such as branches to upgrade them into tools. You will eventually be able to do more in-depth things with all of the skill lines, and I am already seeing some of the benefits, like being able to spot food sources and useful materials from much farther away. 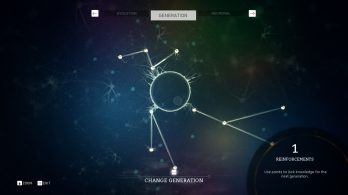 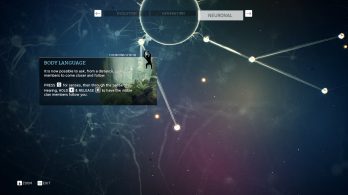 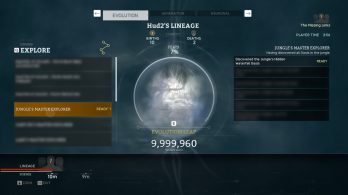 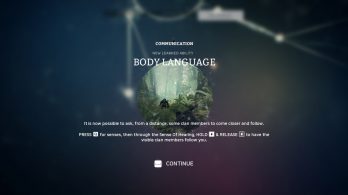 The two things I was most excited about was making a branch into a stick to lift rocks up, and cracking open a coconut with a rock so I could have more substantial food. You’ll get both buffs and debuffs while playing, and I have had more than a few of my poor guys die from making bad decisions. In my video above of my first hour of gameplay, I stole an egg from a birds nest which led to the bird tearing me up, and eventually I bled to death. There is a way to cure most of these debuffs, but sadly I couldn’t figure things out in time. My first playthrough of the game, my entire clan died off in some pretty savage ways. 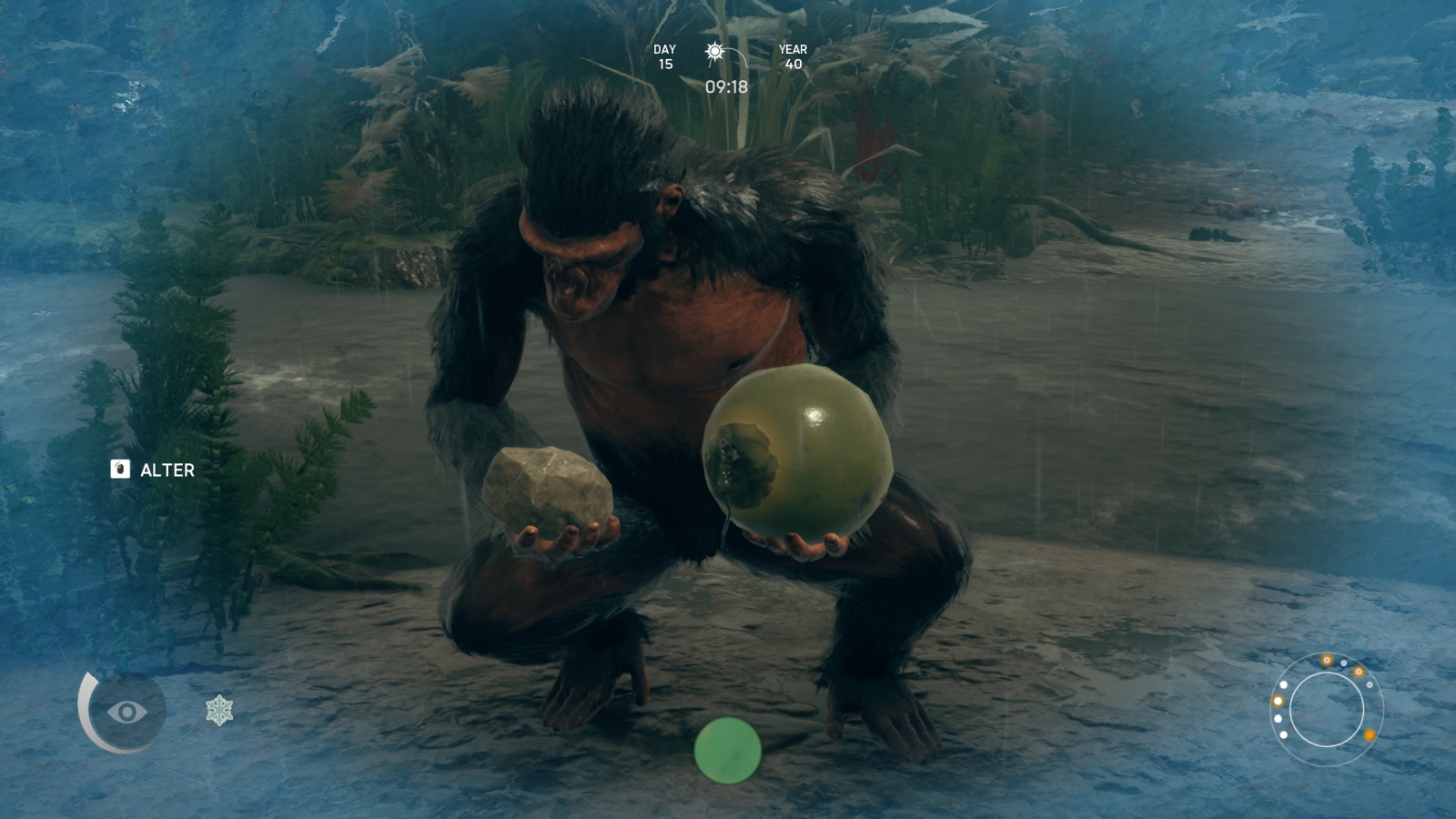 I certainly didn’t do so hot on that first game, but I did venture out (probably WAY earlier than I should have) pretty far into the forest. I came across another encampment that was safe to build in, a few other apes that were not in my clan that seemed to be having some sort of existential crisis, a HUGE snake that ate my partner, a tiger that killed me, and a boar that skewered me. Once you get far away from the safety of your clan and camp, you can become overwhelmed and your hominid goes into fear mode. The screen gets blurry, crazy sounds and images of predators pop up all around you, and you need to find your way out of your own mind. You’ll see a dopamine meter pop up on your screen, and if you can’t get yourself calmed down (by doing simple things such as eating and discovery) you will go into a frenzy and respawn back at your camp.

During one of these freakouts, my primate did manage to calm himself down, only to literally be attacked and killed by a lion seconds after coming down off his fear-induced trip. I quickly found out that staying in the treetops is much safer. When you do encounter a predator, the game goes into slow motion, and a dodge mini-game comes into action. It seemed really clunky, or maybe I just didn’t get how it worked, because more often than not I ended up dying. You have to hit and release a button at just the right time to avoid getting attacked. This may be due to the fact that I am playing with mouse and keyboard, when the game says it’s best experience with a controller. Either way, it’s definitely something I need more practice with. I won’t lie, I am terrified of exploring at this point, and have been super cautious.

As mentioned before, you can switch between your clan members, and in the event you die while out in the jungle exploring, you’ll take control of one of the primates back at your base camp. My second time through the game, I managed to form a bond with a male and eventually mated with him. This produced a baby, which is vital to keeping your lineage going for the long term. Let’s face it, this game is savage and your guys WILL die. Alot. So I’d highly suggest putting in some groundwork early on in your first camp to bond the adults and start pumping out babies. You also get more neuronal energy while carrying babies or just by having them follow you. 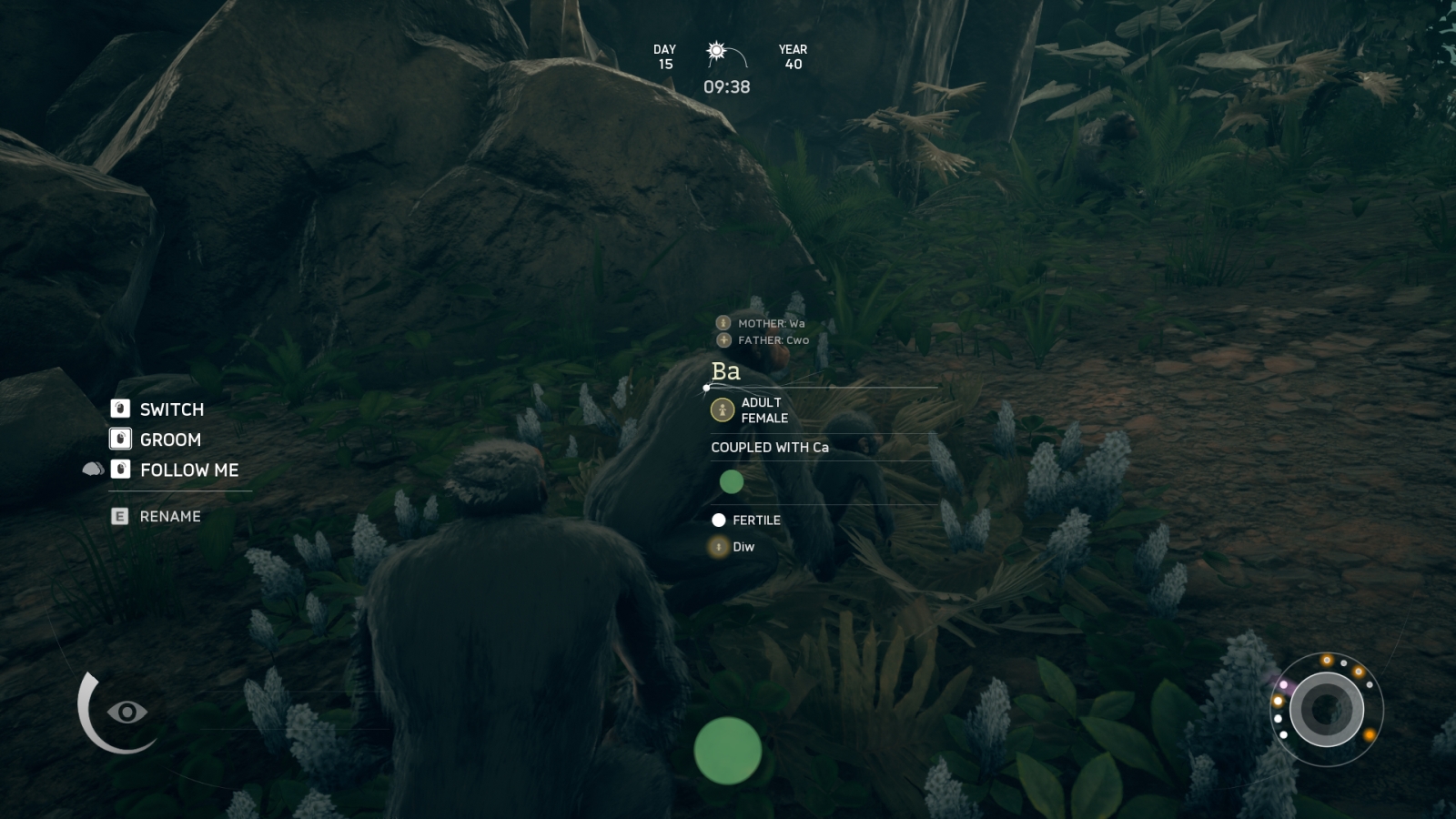 The analysis information that tells you about your clan members.

I am also happy to report that this time around, I finally managed to solve a problem that a wild primate was having, and got her to join my clan. Even better, she was a fertile female, and as soon as we got back to camp I was able to mate her and produce a baby. This was big news for me, because I’m pretty sure bringing in outsiders is essential to keeping your clan going through many generations. I don’t know if you can interbreed, but the game interface does tell you that a certain member of your clan is a family member, so I assume incest isn’t good. I’m definitely no expert on anything in this game, and will admit most of the time I am wandering around wondering what the hell I am even doing, but at least I am having fun doing it!

Right now, things are pretty basic with my new game. I just have to form bonds and use my senses to discover new things and new places. Once I am brave enough, I will venture back out into the jungle again. My next goal is to figure out how to do more than just intimidate predators. I’m hoping once I get better with the dodging, I can try whacking them with my stick. Some people might find the difficulty of this game to be too much, but I enjoy the challenge and will put more time into this game to see where it leads. 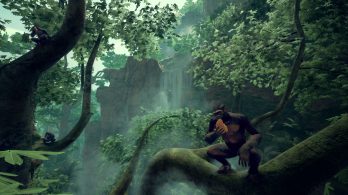 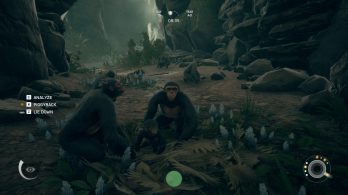 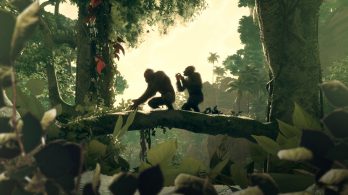 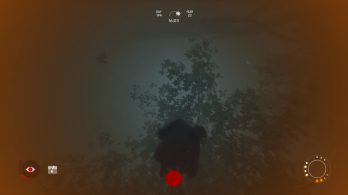 So far, I have put about six hours total into the game between both sessions. I am very excited to learn how to weild a weapon to kill predators, and to explore more into the jungle. This has been a really unique and challenging experience, and I am thoroughly enjoying it. You can get Ancestors: The Humankind Odyssey on PC via the Epic Games store on August 27th, and for PS4 and Xbox One in December of 2019. It’s currently retailing for $39.99

Holly Hudspeth is a best-selling author living in Fort Worth, Texas. She has six published novels to date; The Skyy Huntington Series, which is an epic dark fantasy adventure, and One Small Detail, a stand-alone medieval fantasy. Holly also enjoys writing fan fiction based on her avatars from games such as EverQuest, Elder Scrolls Online, and World of Warcraft. Her first major purchase at the established age of nine was the NES, and she has been gaming ever since. She enjoys fantasy games, city builders, RPGs, MMOs, SMITE, and The Sims franchise. Most nights she is in SMITE with her husband and friends, or playing ESO. When she isn't gaming, she is probably either at Disney or planning her next trip there.
Related Articles: Ancestors: The Humankind Odyssey, Let's Play
Share
Tweet
Share
Submit