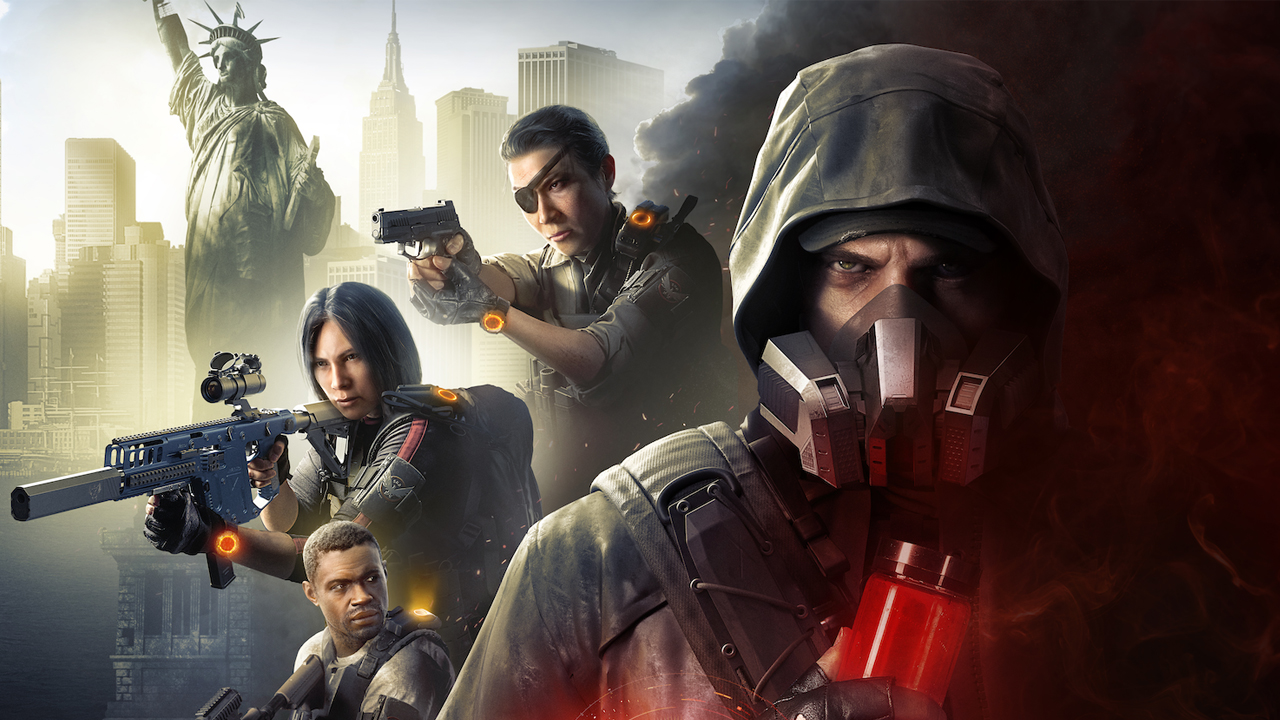 It’s holiday 2018, and everyone is excitedly rushing to stores for Black Friday sales — the largest shopping day of the year. More money changes hands on this day than any other, making it the perfect vector to deploy a terrible virus. The Green Poison devastated New York, causing The Division to be deployed. Aaron Keener, a Division Agent and callsign “Vanguard”, was one of the first deployed. The Dark Zone collapsed quickly under the toxin, roving bands of looters and gangs, and general chaos, leaving Keener defending a band of escaping civilians. Cornered, he radioed the Joint Task Force (JTF) for backup and extraction — a request that would be denied, leaving Keener and the civilians to die. Fighting his way out (though all of the civilians died in the process), Keener turned on The Division, becoming the monster behind the curtain. Surprisingly, despite numerous tangents and audio logs showing how he was pulling the strings, Keener kept to the shadows…until now.

As you might guess from the title, The Division 2: Warlords of New York takes you back to the Big Apple when Keener decides to make his presence known, outright taunting the team to come and get him. Hopping into a chopper, you touch down in the city that never sleeps, only to come face to face with four very dangerous threats on top of Keener himself. Across roughly 8-10 hours of gameplay, this expansion pits you and up to three of your friends against the long-running antagonist and his four lieutenants, each with special skills and equipment to stop you dead in your tracks. 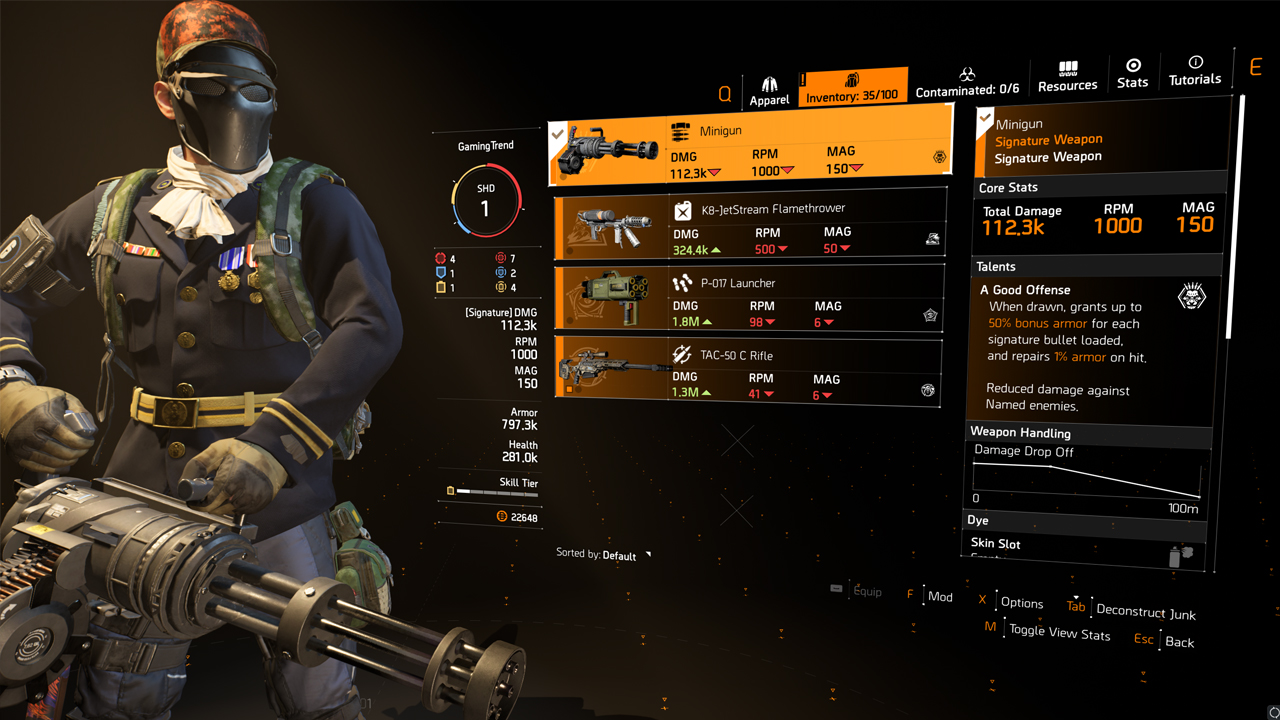 The minigun makes its point in a spectacular fashion.

It isn’t just Keener that throws back to the original Division title, you’ll also be facing some familiar foes. You might recall that New York was gripped by the Rikers, a group of escaped convicts hell-bent on occupying the city and causing chaos, as well as the Cleaners, ex-sanitation workers who are trying to stop the spread of the Green Poison with flamethrowers and bad intention. Despite familiar faces, when you touch down in lower Manhattan, you’ll find yourself in a very changed city. Gone is the blanket of snow, replaced by springtime growth and the ever-present destruction and filth. It’s good to be home.

While the series still relies on ever-rising heath pools (you’ll be reaching the heights of millions of hit points of damage and enemy health as you reach the new level cap of 40), Keener and his crew bring some fresh weapons to the table to keep it interesting. Each lieutenant has a new piece of SHD tech that you can nab for yourself once you put them in the dirt permanently. I won’t spoil these, or what Keener has up his sleeves, as it would ruin the fun, but suffice it to say each fight requires a bit of finesse, or at least different tactics than we’ve seen previously.

Once you reach the endgame, you’ll be able to tackle Heroic and Legendary difficulties, as before. Playing on these difficulty levels, or fighting through Invaded missions extends the mission lengths and challenge through further armoring your foes and giving them ever expanding healthbars. I really enjoyed the experience of getting to the endgame, but that level of grinding is not for me, though it waits for those of you who enjoy it. Thankfully, for those who do not, or didn’t quite max out the main game’s level, Warlords also offers the opportunity to create a new character, placing them in New York with an automatic bump to level 30, and a base set of gear to get started. 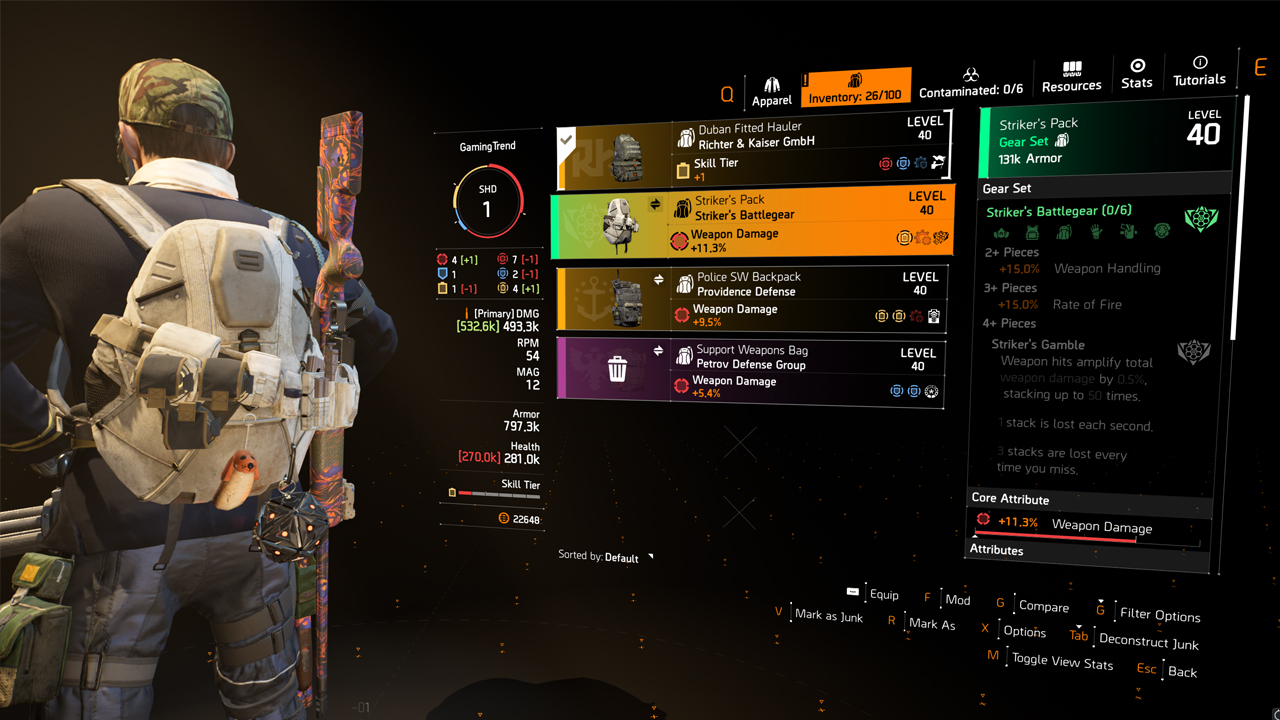 There are plenty of new gear sets awaiting players.

If you are interested in the endgame content, you’ll also find a new mechanic beyond level 40. Augmenting your farming for exotic gear is a new point system that lets players put points into the individual stats that make your character more effective in the field, such as armor regen, critical hit chance or damage, or the other stats you’ll often find on weapons. These permanent upgrades incrementally make your character a little stronger for each “level” after 40, providing an ARPG-like way to grow beyond the cap.

Unfortunately, there is something else waiting for you in Warlords of New York — bugs. During my team’s playthrough, we encountered the usual enemies stuck in walls after dying stuff, but we also hit several moments where we’d become stuck on ladders and couldn’t even press escape to reach the menu, occasional lag and rubber banding, and the occasional hiccup with drones disappearing or hanging in midair after destruction, just to name a few. The team’s track record in swatting these in previous outings is good, but it always takes us a few weeks post-launch to get there.

Beyond the game’s fairly decent story thread, there are a few fresh mechanics, the chief of which being the recalibration station. Located in Haven, your base of operations, is a new crafting desk that reminds me of the Kunai Cube in Blizzard’s Diablo 3. Grabbing oodles of loot in The Division series means being weighed down with an armory’s worth of weapons, most of which you’ll simply harvest for parts if the numbers on those guns don’t beat what you are currently using. With this station, you’ll be able to make use of them in a new way as you extract individual stats, distilling them into a library that you can instead apply to other weapons. By way of example, if you snap up a pistol that has a “god roll” critical chance (represented by a progress bar on the weapon), you can deconstruct that weapon, pulling that individual stat, letting you later apply that stat to the pistol of your choice. It means you won’t be hammering the V key to mark everything as trash any longer, instead giving a more careful inspection to each piece of loot you acquire in the field. This bench, along with a simplified and easier-to-understand loot system, will give players a new reason to care about gear. 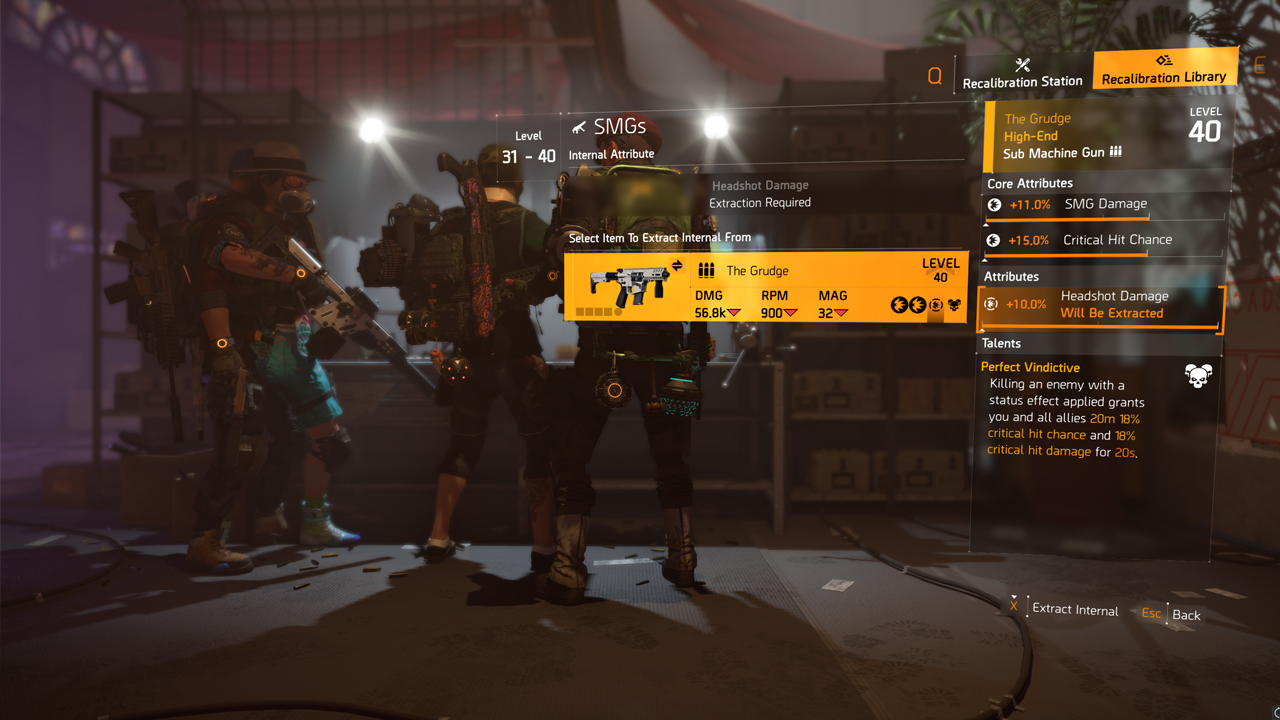 The Recalibration station gives an entirely new way to manage your gear.

One of my favorite improvements Massive Entertainment has brought to Warlords of New York is a greater emphasis on side content, collectibles and puzzles. The environment has always been a twisted maze of catwalks and staircases to find the SHD tech caches, but now there are occasionally more nuanced puzzles that will ask more of your powers of observation. Perhaps you’ll have to shoot out some power junction boxes to unlock a fence, or maybe a door you found can be opened by shooting the lock from a difficult-to-access adjacent room. Either way, it slows the relentless pace a bit, pushing players to take in the scenery.

Speaking of scenery, this expansion brings a few coats of fresh polish to the table. Graphically, it has never looked better, with fresh cosmetic gear, weapons, and goofy emotes, but the new toy is the dynamic weather system. Randomly, and at the most inopportune times, the dynamic weather will blow through. This can mean reduced visibility with rain, or almost no visibility when a sandstorm blows through. During a fight with one of the lieutenants, one of these sandstorms gripped the enclosed space, making fighting the enemies from all sides particularly challenging. The fun part is that it is dynamic, so your experience may differ wildly. My only complaint here is that I wish it was used more. 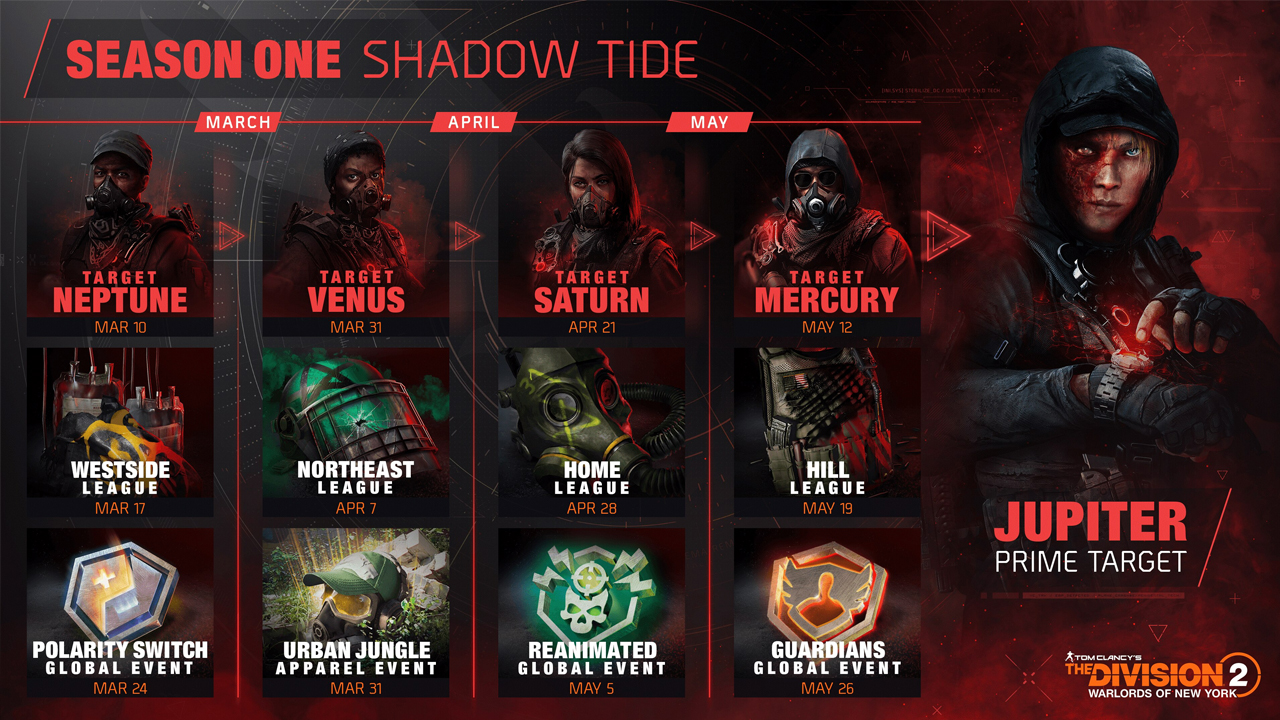 Beating Warlords of New York is only the beginning.

When the expansion’s credits roll, you’ll be given a completely new set of targets to chase, linking directly to the Seasons system in the game. Much like the special targets in The Division 2, these folks are grouped much like the enemies in this expansion — four lieutenants and one main boss. Each Season hunt will last three months, providing fresh targets and new gear to worry about. It’s great to see Massive bring us back to New York, but all of these improvements, and their ongoing commitment to the world they’ve built, makes Warlords of New York a must-have.

The Division 2: Warlords of New York

Warlords of New York is easily the best expansion for the game to date. With fresh foes, a new portion of New York to explore, great gear, and some brand new reasons to care about loot, it delivers on its lofty promises. Now, we just need Massive to settle in and swat some of these bugs…

Ron Burke is the Editor in Chief for Gaming Trend. Currently living in Fort Worth, Texas, Ron is an old-school gamer who enjoys CRPGs, action/adventure, platformers, music games, and has recently gotten into tabletop gaming. Ron is also a fourth degree black belt, with a Master's rank in Matsumura Seito Shōrin-ryū, Moo Duk Kwan Tang Soo Do, Universal Tang Soo Do Alliance, and International Tang Soo Do Federation. He also holds ranks in several other styles in his search to be a well-rounded fighter. Ron has been married to Gaming Trend Editor, Laura Burke, for 21 years. They have three dogs - Pazuzu (Irish Terrier), Atë, and Calliope (both Australian Kelpie/Pit Bull mixes).
Related Articles: The Division 2: Warlords of New York
Share
Tweet
Share
Submit