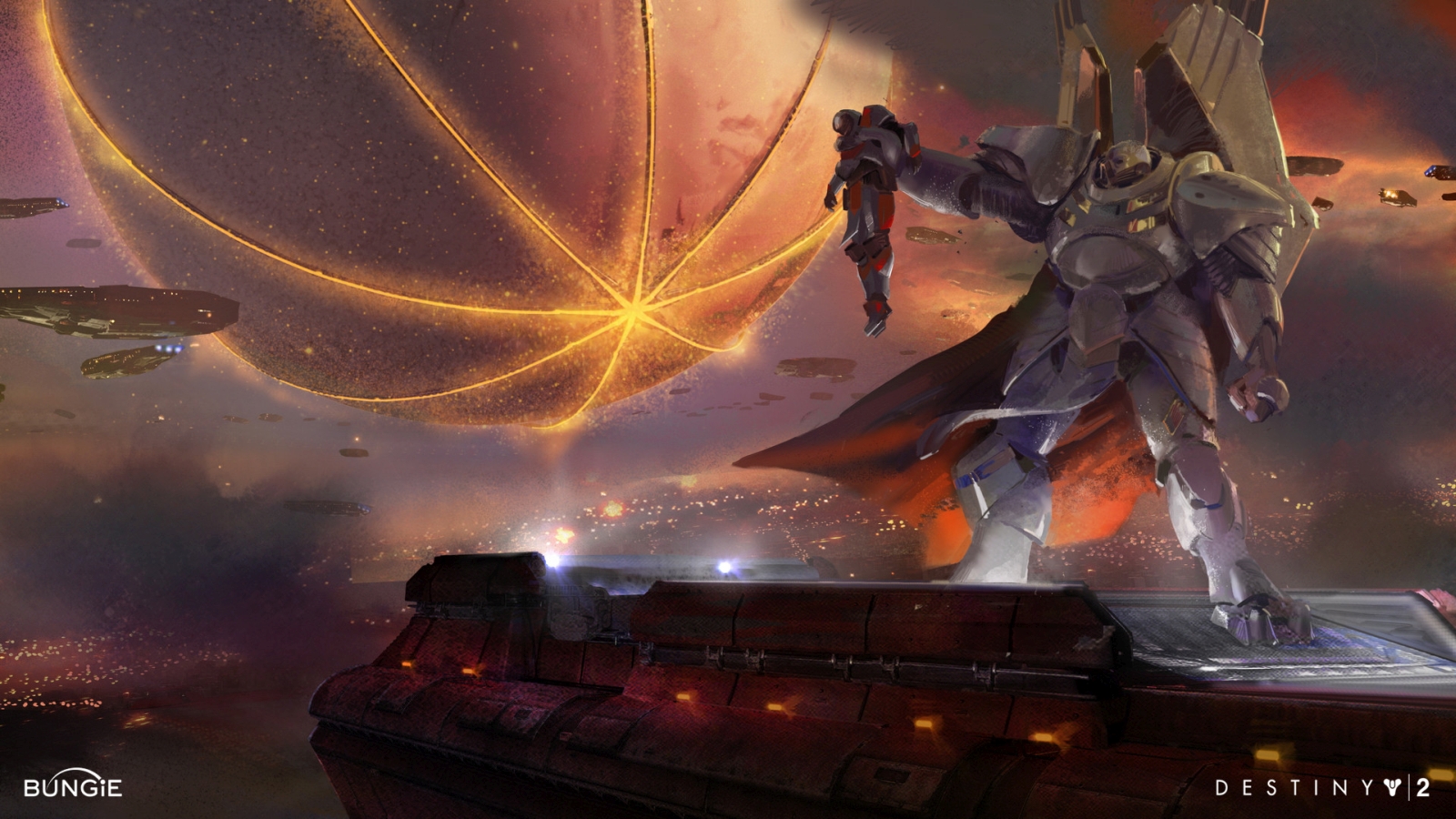 There is no doubt that the push to the current console generations, and the welcome natural home on PC, has pushed the team at Bungie to up their game for Destiny 2. Insight Editions takes us back to the world of The Traveller, Guardians, and The Light, in their second installment — The Art of Destiny: Volume 2.

Unlike most other artbooks from Insight or other publishers, both The Art of Destiny, and The Art of Destiny: Volume 2 are a wide-format book (11 x 1.2 x 10 inches) instead of a more contemporary vertical format (9.3 x 1 x 12.2 inches). Weighing in at 216 pages, this tome is chock full of artwork ranging from early concept pencil and ink work, to fully-realized 3D renderings that appear in the final game.

The book opens with Art Director for Destiny 2, Michael Zak. In it he relays a childhood formative story around how a simple miscalculation lead to the conundrum the team has faced with the Destiny franchise — in a world with limitless possibilities, “The hardest question is what not to make”. Following this preface is a Foreword from Game Director Luke Smith who expands on this concept right off the bat. Destiny represents a world where “Almost every idea fits”. Both of these sum up what comes after them nicely, and provide the solid base on which the team is building the world of Destiny 2.

Part 1 – The Journey
Chapter 1: An Age of Triumph fills in a gap the first book couldn’t cover — the fantastic Rise of Iron, House of Wolves, The Dark Below, and The Taken King expansion packs. The images here are iconic, and I can immediately recall tackling these areas with friends. Also in this section is an in-game event you might recall, when Destiny player Adriel Wallick proposed to Rami Ismail with the in-game custom-made Ring of Eternity, which is a great nod to the way Bungie interfaces with their fans.

The Taken King, House of Wolves, and The Dark Below sections showcase some of the fantastic bosses we faced in those expansions, including Kell of the Fallen, Eris Morn, as well as the titular Taken King himself. Beyond that, the Live Events section showcases a string of amazing armor the likes I never saw in game. I’d kill a lot of Crota’s finest for some of these outfits.

Part 2 – Homecoming
The second chapter of the book, entitled The Last City, represents the start of Destiny 2. It also gives us one last look at The Last City before the arrival of Ghaul, as his Red Legion destroyed it in the opening moments of the game. After showcasing the incredible cinematic work of partners like Blur Studios, the team also gives us a look at some of the iconography present in the game. Representing the Guardian classes and subclasses, as well as the many banners and nameplates that make up some of the in-game fiction, these icons represent a lot of the best collectables in the game.

The third chapter covers the Guardians and their being severed from the light of the Traveller (whom is captured in the opening moments of Destiny 2) representing the main thrust of the first few hours of the game. Whether Warlock, Hunter, or Titan, eventually you’ll reclaim your connection to the light, and in doing so, earn new subclasses. These are represented here with some awesome artwork for each. I particularly like the pieces for the Warlock subclass Dawnblade.

There is a section that also demonstrates how the team would take something from the concept phase all the way through 3D, using Wings of the Sacred Dawn and the Crown of Tempests. This two page spread is repeated for all three classes, giving way to an impressive cross-section of Guardian weapons and vehicles, and the super attacks of each. Capping things off, as in previous chapters, is a bit of cutscene work, as well as a two page spread giving us a distant view of a shard of the Traveller.

The European Dead Zone rounds out this second portion of the book. Once you finish the “tutorial” area, you’ll reach the first central hub of the game — the European Dead Zone, including The Farm, the surrounding forests, and city fragments. Here, the artwork demonstrates the concept the team wanted to create around the shard, with nature becoming more strange the closer the player draws to the object.

Part 3 – Brave New Worlds
The next three chapters take place on Titan, Nessus, and Io, giving the team a completely new canvas to bring their stories to life. Rescuing Cayde-6 and Zavalla amidst the strange worlds of floating platforms and overgrown brightly colored world of Nessus, fighting off familiar foes like minotaurs and centaurs from the Vex. Protheon, the Modular Mind (and sub-boss for this area), also makes an appearance amidst his supporting cast of characters. As before, the chapters end with CGI, but this time punctuated with Ghaul himself holding the limp and seemingly-lifeless body of a Guardian, his towering height stands in contrast to the massive encircled Traveller in the background.

Part 4 – Nemesis
In chapter eight and nine, we finally get a good look at Ghaul and his Red Legion. The Cabal represent a formidable foe, and their weaponry and starships are massive. Each page in these two chapters showcases the immense size differences between the Red Legion and the Guardians who stand against them.

Later portions of the chapter showcase the impressive and varied armors, weapon loadouts, and furious beasts Ghaul and his armies will bring to bear against the Traveller and the players. It also ends with some more excellent CGI, though these last two chapters are filled with spoilers for those who haven’t finished the game.

The final section of the book cover the Trials of the Nine. This brief portion shows plenty of spoilers, including the massive Emissary. Beyond this section, however, lies one of the biggest highlights in The Art of Destiny: Volume 2.

In a fantastic addition to the Insight Art books that I’d not seen in previous art books, Insight and Bungie have included a comprehensive list of the team members. Showcasing the Bungie Destiny Team from 2015 to 2017, this covers every division of the crew, and not just the art team. Beyond that, it covers additional teams like High Moon Studios, Vicarious Visions, Activision Publishing, Audiokinetic, Havok, and CG partners like Axis Animations, Digic Pictures, and Blur Studios. Right after all those credits is an absolutely massive list of contributing authors and the pages where their works can be seen within this volume. It’s a great credit addition for those listed, and an awesome reference for anyone interested in following the works of specific artists.

The Art of Destiny: Volume 2

Unsurprisingly, there are quite a few spoilers contained in this volume, including one regarding the Leviathan Raid. None of that should dissuade you from picking up this second volume of artwork in the Destiny game legacy. Each section provides fantastic backstory and incredible concept and final art that is sure to impress any Destiny fan.

Ron Burke is the Editor in Chief for Gaming Trend. Currently living in Fort Worth, Texas, Ron is an old-school gamer who enjoys CRPGs, action/adventure, platformers, music games, and has recently gotten into tabletop gaming. Ron is also a fourth degree black belt, with a Master's rank in Matsumura Seito Shōrin-ryū, Moo Duk Kwan Tang Soo Do, Universal Tang Soo Do Alliance, and International Tang Soo Do Federation. He also holds ranks in several other styles in his search to be a well-rounded fighter. Ron has been married to Gaming Trend Editor, Laura Burke, for 21 years. They have three dogs - Pazuzu (Irish Terrier), Atë, and Calliope (both Australian Kelpie/Pit Bull mixes).
Related Articles: Culture, The Art of Destiny: Volume 2
Share
Tweet
Share
Submit