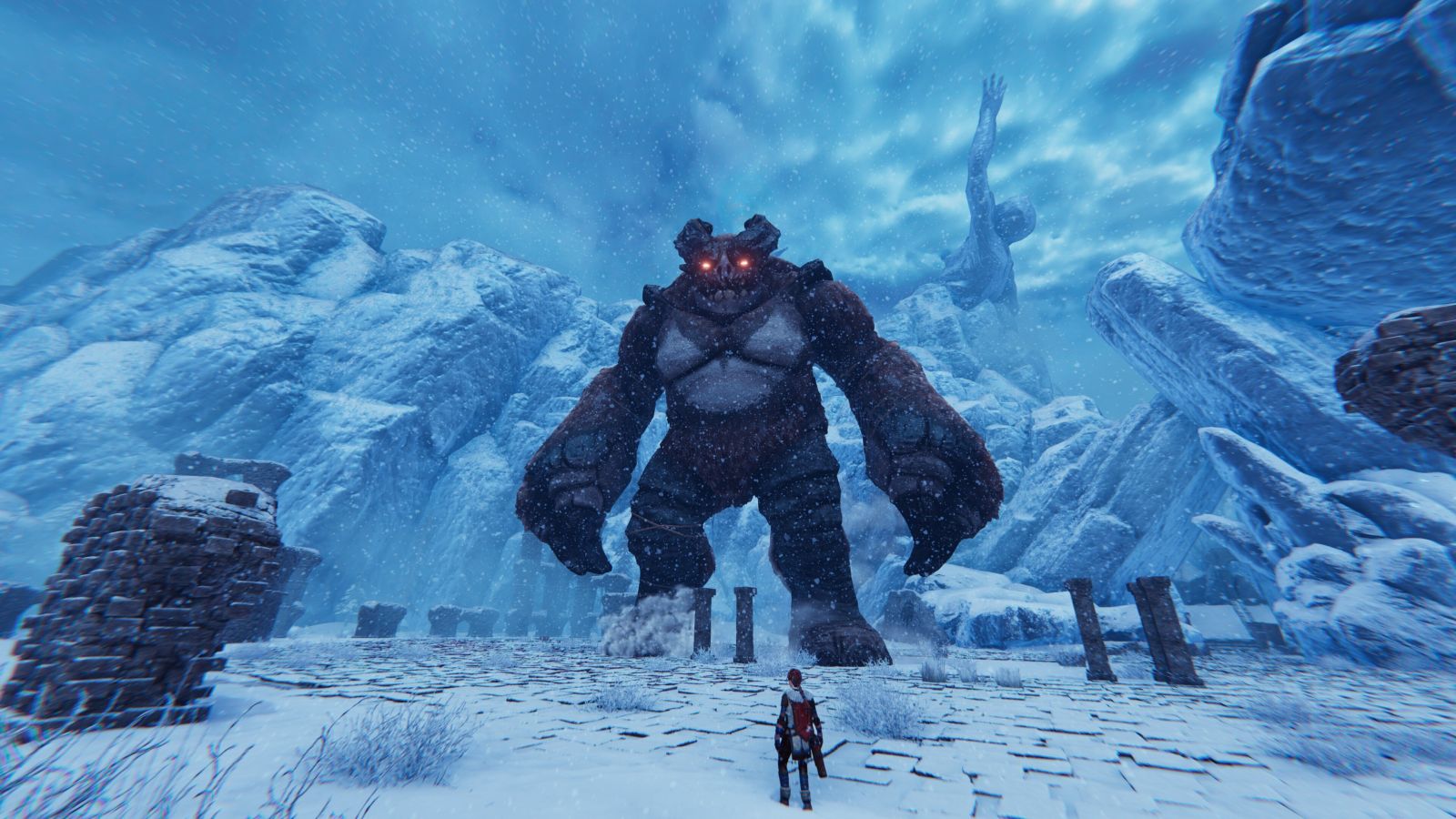 Praey for the Gods, impossible as it seems, was made for less than the marketing budget of any game on your shelf (less than 500k), and by just three people – Brian Parnell, Tim Wiese, and Hung-Chien Liao of No Matter Studios. Using the Unity engine, they’ve brought to life multiple genres into a single game – survival, crafting, exploration, massive boss battles, and more come together that are equal parts Shadow of the Colossus and Breath of the Wild, with a dash of survival sprinkled throughout. Could those come together to scratch the itch Team Ico’s marked absence has left behind? Time to grab our grappling gun and find out.

The game starts with the silent protagonist waking up, her ship having run aground amidst many others. The world has been plunged into a never-ending winter, and this island holds the key.
Armed with nothing but the meager clothes on her back, she’ll need to uncover the mystery of the massive beasts that inhabit this island, and what their presence means to this dying world. Below you’ll find the first 18 minutes of the game in 4K, culminating in the defeat of the first boss. Enjoy!

Before getting started you’ll be presented with four difficulty levels, and you’ll want to pay attention as they are more than just easy, normal, hard, and legendary. While the team is still working on the ability to add difficulty change mid game, as things currently stand you have three sub-options as well. Story reduces quite a bit of the challenge from the cold, and it’s never lethal. Weapons can become damaged and do not break. Boost mode is essentially the same as Story but weapons can break and be repaired. Cold resistance will also only regenerate when out of extreme cold.. The final one is called Survival, and it’s no joke. Weapons break, exhaustion is real, and cold resistance only regenerates when out of extreme cold and in front of a heat source. I’d recommend starting with Story and going from there.

If you do decide to play on Boost or Survival, weapon durability will be a big part of survival. In the beginning you’ll start out with a basic grappling hook, and you’ll likely pick up a busted sword. Over time you’ll learn to make better tools with more durable materials, but the cold can end your plan to take down even the weakest foe. Beyond the eight massive beasts that serve as bosses, you’ll have to pay attention to the number one killer in the game – the elements. Food, sleep, and warmth are the three pillars of survival in Praey for the Gods, and you’ll need to watch all of them to have any chance.

Beyond the colossi (if we are allowed to call them that) in the game, mini-bosses are scattered throughout the world and can be every bit as dangerous, if not moreso. More often these are smaller creatures, but all of them have the same weakness – a concealed bell that must be rung three times to stop them in their tracks. Because these monsters are smaller and more agile they are often tougher to take down as they aren’t so slow to respond. If you die, and you will, you’ll respawn at a central hub pool which holds mysteries of its own. 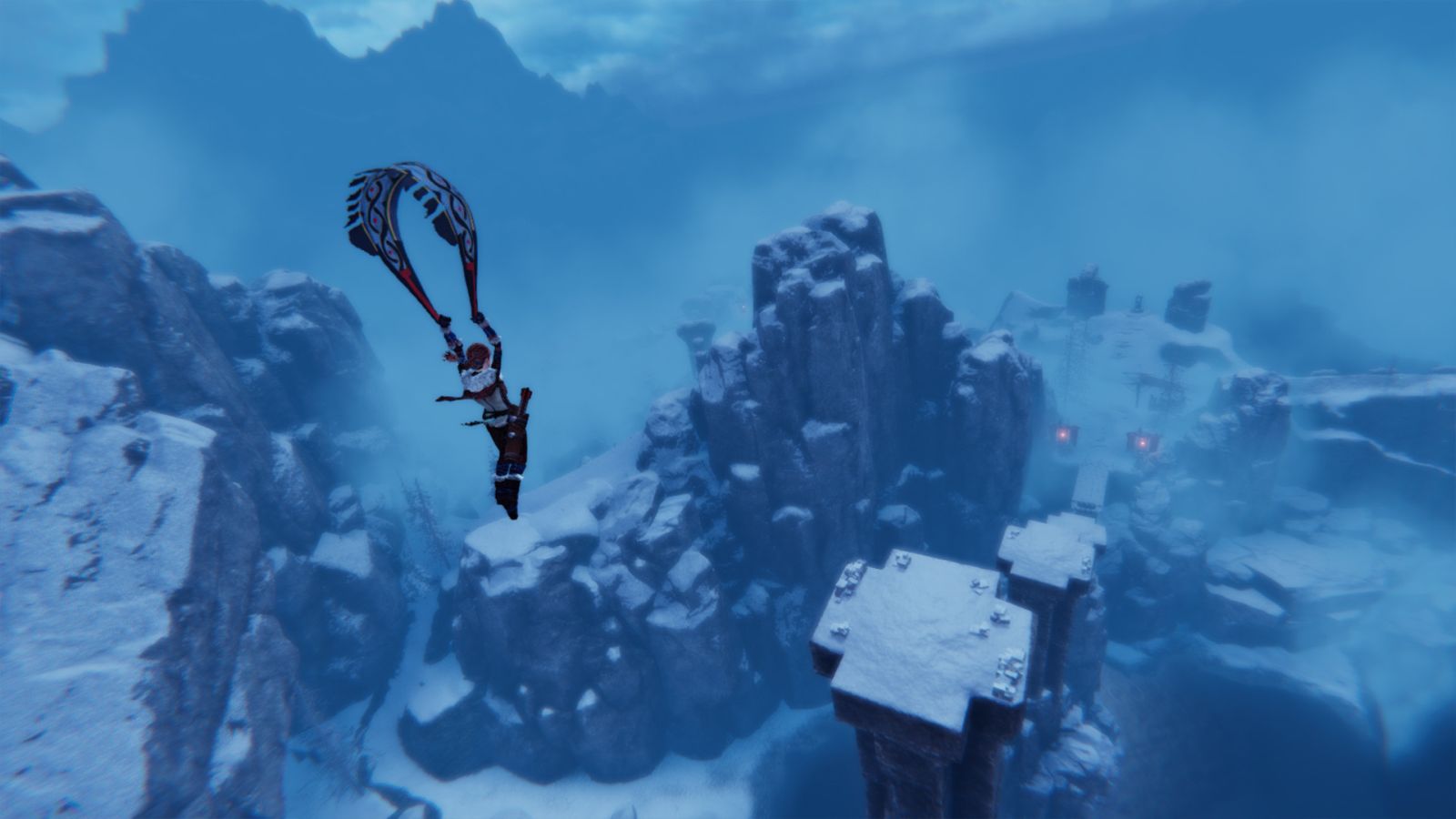 Graphically, Praey for the Gods is impossibly pretty, especially when you again realize that there are three people working on this game. You can adjust the grass draw distance, shadows and how far away they are rendered and at what resolution, SSAO, AA, depth of field, chromatic aberration, v-sync, fur density, and general draw distance to match your hardware, though I found the game to be well-optimized on a GeForce RTX 2060, though the minspec is all the way down to a GeForce 670. If you have a system built in the last decade or more you should be fine.

The semi-tilt shift photography approach makes monsters and mountains look even more enormous. While the landscape is blanketed in white, it’s far from devoid of detail. There are plenty of critters running around that can be a good (and necessary) source of meat that you can cook on a fire. They also provide you with necessary crafting materials. The bosses and sub-bosses are stylized and look both otherworldly but somehow rooted in our world. Creatures like the Boar are clearly larger versions of what we might find, but covered with bony rock-like structures and horns. In the video above you’ll see the very first boss, but I wouldn’t want to ruin how to approach the remaining bosses – that’s a big part of what makes Praey for the Gods exciting and fun. 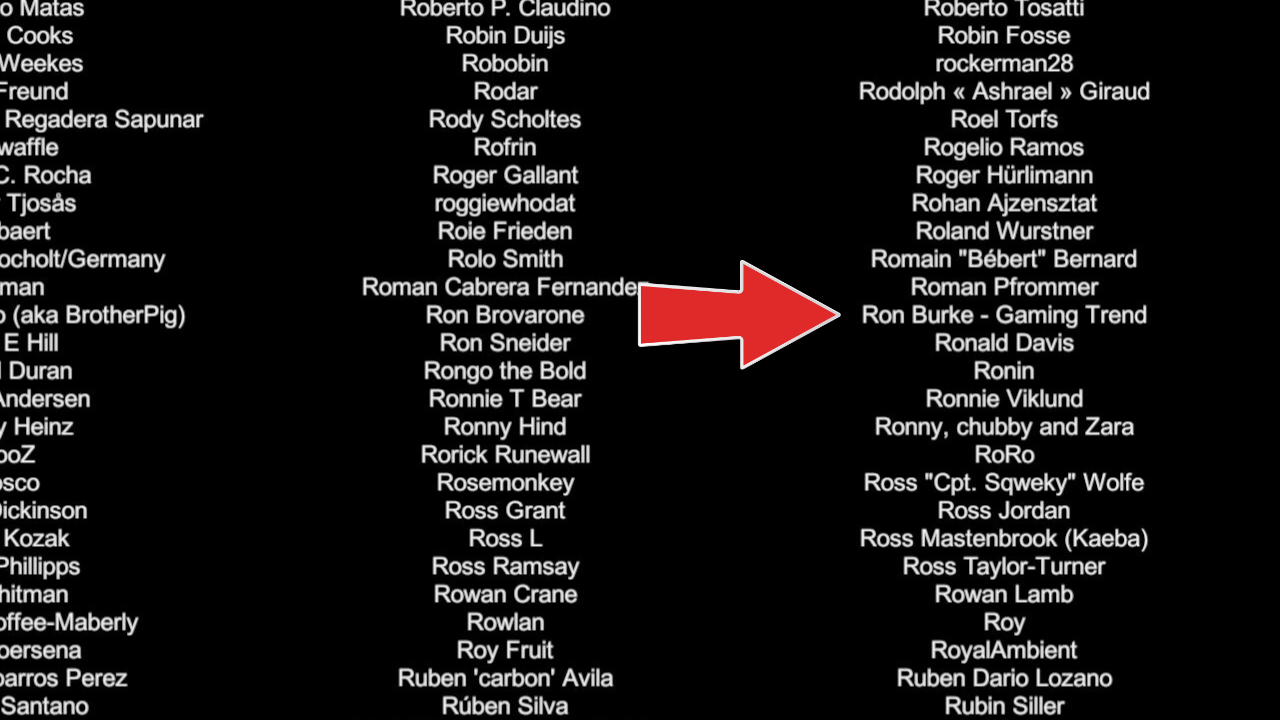 I don’t know how difficult it is to make realistic deep snow deformation, or how challenging it might be to have the harpoon on your arm cut ripples into the fluff, but wow has Praey for the Gods nailed this. Objects in the world stay where you dropped them (handy when you encounter a puzzle where you need to obtain four deer hearts but maybe haven’t upgraded your pack to carry them all. When the storms get bad you might have trouble finding your way back if not for the footprints in the snow, allowing you to backtrack. It’s a cool feature that’d be easy to overlook, but makes the whole thing feel that much more realistic.

Honestly my only real complaints with Praey for the Gods are the controls, the occasional bug, and less occasionally, the camera. Sometimes the controls feel too “floaty”, bringing some deaths that feel undeserved. I ran into this a few times with the colossi, but more frequently with the sub-bosses. When you get trampled it takes an inordinate amount of time to stand back up, which can lead to some animation-lock deaths. Using the combat lock-on can help, but the floatiness will still bite you. I also ran into a few transitions that failed to load, dumping me to a black screen. Not a big deal as the auto-save will set you right, but they happen. The camera really only rears its head on the flying bosses. I don’t want to say more for fear of ruining it, but when you need to run in one direction and the camera insists on facing the other, it can be a challenge. None of it ruins the fun, but a little more polish here would be good.

The soundtrack for Praey for the Gods is fantastic. Ian Dorsch delivers a dynamic set of tracks that fit the setting perfectly, coming to life with driving beats when you face off against the bosses both big and small. If you dig it as much as I do, you can nab it on the Steam store for an additional $9.99. At a whopping 43 tracks (most of which being full-length tracks), it’s a steal if you are into OST. 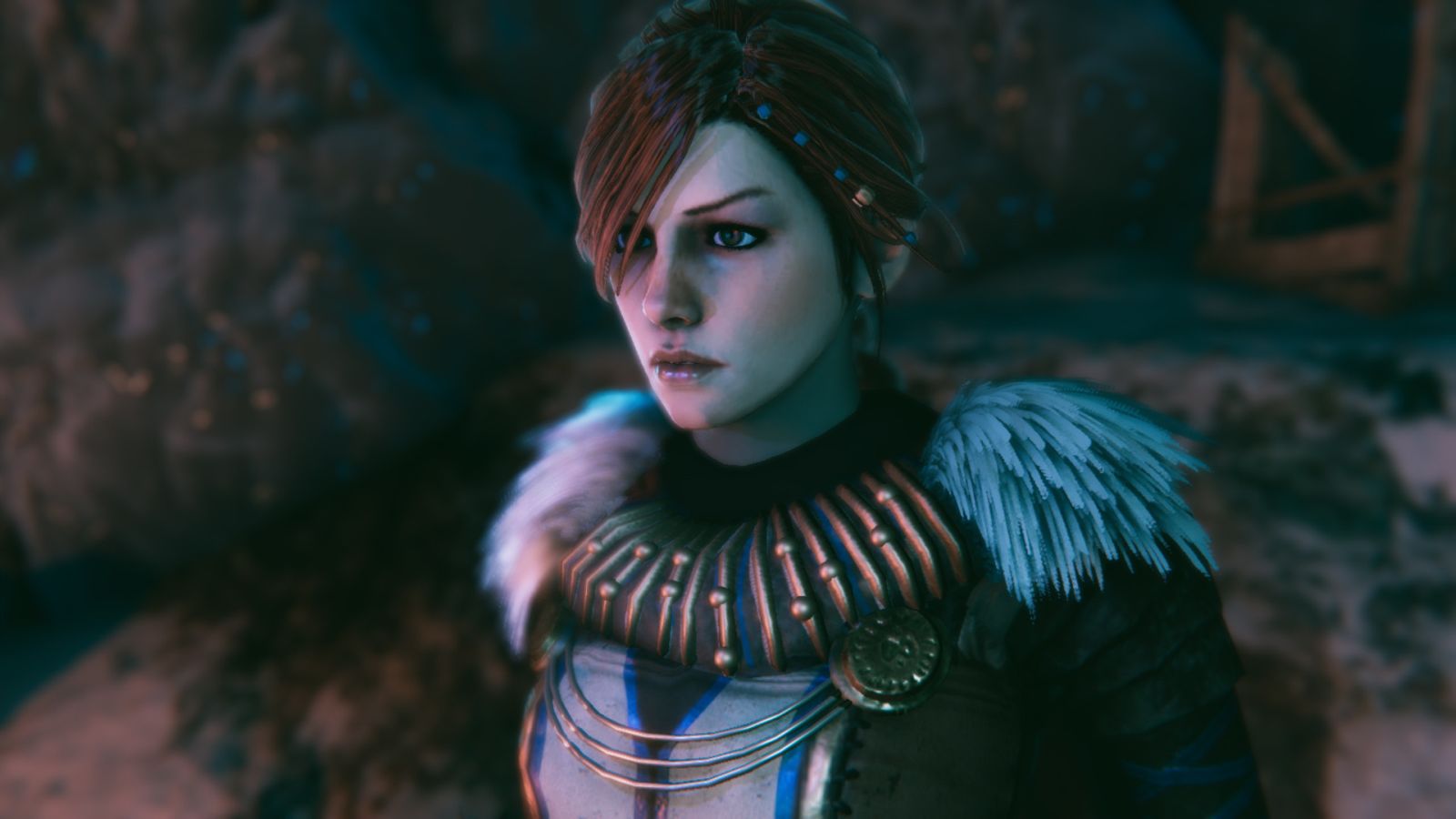 Much of the lore and worldbuilding comes from various scraps of journals left by failed adventurers who came before you. Often near their remains lie little scraps of information about what they encountered when they attempted the same mission you are on. Since you are literally standing over the frozen remains of their effort, you can see how that turned out. Sure, you can just end-run to all of the light falling from the sky to beat the bosses, but there’s a whole world out there to discover.

The game does reward exploration. Beyond additional lore, there are also plenty of puzzles and mysteries to discover. These often reveal totems that, when you collect three of them, can increase your health or stamina. When so much of defeating a boss has more to do with how long you can hold on, it’s worthwhile to track these little golden icons down. 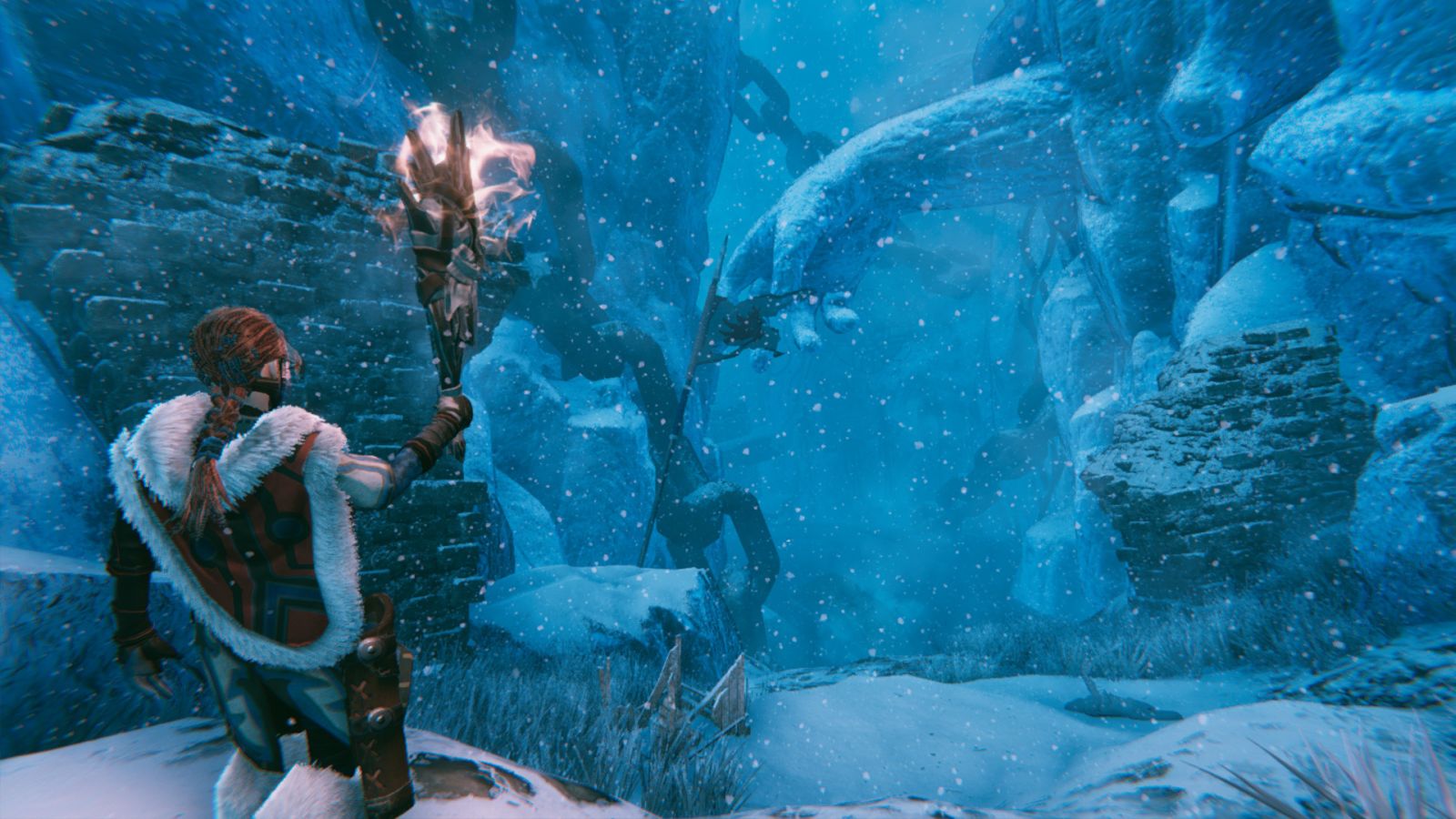 To help you with exploration, you’ll soon discover a sailcloth that’ll let you glide to distant ledges and outcroppings. It functions much like the sailcloth in Breath of the Wild, but this one can be upgraded. Using discovered materials you can craft improvements that help you glide for a longer distance. Similarly, you can upgrade your gear up to three times to help resist cold and damage. These are less important in Story mode as you don’t have to contend with cold other than the stamina drain, but in the other modes you’ll want to start taking out boars and bunnies as soon as possible to build up a barrier between you and the winter chill.

One of the things I do like about Praey for the Gods is that it is not linear. Sure, the beam of light from the sky suggests a specific boss to tackle next, but you aren’t bound by that. You can tackle nearly every boss and subboss in any order you wish, your own skill being the only barrier. Better equipment and longer stamina and health bars might improve your odds, but there’s nothing to stop you – you do you.

When you do manage to pull off that crazy move or slay one of the bosses, there is also an included photo mode in the game. It’s a great addition that has contributed to more than one cool wallpaper for me. If you are familiar with this feature on Sony’s first party PlayStation games, then you know how awesome it is to be able to frame your own hero shots.

In all, the main story will take you about 10 hours to complete, and probably double that if you head out to find all of the various puzzles and lore. All of your accomplishments and attack times are tracked in the stat tracker, and several shrines will allow you to go back and try each boss again. It’s a cool way to showcase the best parts of this game without having to re-explore the world.

Praey for the Gods is another showcase of what a small team can accomplish when a far larger team won’t. While the controls can be occasionally floaty, the pure enjoyment of tackling these puzzle monsters is an absolute joy. Don’t sleep on this one – it’s worth your time.

Ron Burke is the Editor in Chief for Gaming Trend. Currently living in Fort Worth, Texas, Ron is an old-school gamer who enjoys CRPGs, action/adventure, platformers, music games, and has recently gotten into tabletop gaming. Ron is also a fourth degree black belt, with a Master's rank in Matsumura Seito Shōrin-ryū, Moo Duk Kwan Tang Soo Do, Universal Tang Soo Do Alliance, and International Tang Soo Do Federation. He also holds ranks in several other styles in his search to be a well-rounded fighter. Ron has been married to Gaming Trend Editor, Laura Burke, for 21 years. They have three dogs - Pazuzu (Irish Terrier), Atë, and Calliope (both Australian Kelpie/Pit Bull mixes).
Related Articles: Let's Play, Praey for the Gods
Share
Tweet
Share
Submit