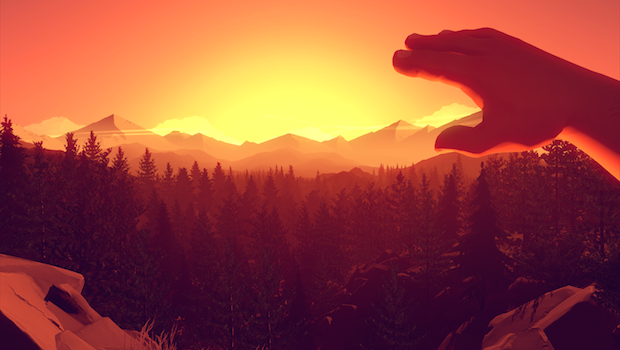 When I was younger, I spent a lot of time camping. It was mostly just a thing to do every couple months, to learn some knots and how to make a fire, but I was always reminded of how vast and wild the wilderness was. It was so big, so foreign, yet I always felt so isolated and alone with my thoughts.

Firewatch tackles those feelings very deliberately, with its protagonist Henry fleeing to the Wyoming wild after a long and strenuous period of his life. He’s tackled love, marriage, loss, hardship, and seeing someone he knows intimately slowly fade, unable to recognize his face on some days. The forest setting in Firewatch isn’t only a beautiful pastel background, but a setting for Henry’s transcendental journey of acceptance.

Your lookout is your base of operations and home away from home, acting as a constant landmark in the woods.

After you learn of Henry’s past through a short series of text vignettes, you’re placed in his shoes as you take on the duties of a volunteer member of the Wyoming Firewatch. Yours and Henry’s only human contact is through radio communications with his coordinator, Delilah. As the days go on, Henry and Delilah begin to talk more and more, they develop a bond, either out of their shared solitary confinement or some other need for human response.

Your tasks as a Firewatch member are relatively simple, and the mechanics here match that, but the presentation often supersedes the complexity. Though most objectives are simply walk to a place, report an event or object, and continue on your way, there’s a physicality to them that gives them meaning.

The map is a literal map, one that Henry has to hold up and peer at, often with a compass in his other hand. Directions are given by way of landmarks, which you can only discover either in-person or by copying them from detailed maps found in supply caches. Picking up objects and manipulating them in different directions is often your only interaction with the world of Firewatch; but the manner that you interact with these objects, and how frequently you’re allowed to do so, makes you feel more involved with the world than most other narratively driven titles.

Pulling out your map and peering at trails and lines is immersive and a welcome change to automated maps.

The summer proceeds on, and as Henry loses thoughts of his marital issues and furthers his relationship with Delilah, small incidents begin to stack up. Two teens go missing, with Henry the last person to see them; the Two Forks Lookout, Henry’s home and watchtower, is ransacked; and a strange man is seen hiking the trails at night.

Mystery abounds in this wilderness, and soon the comfortable space vacuum that Henry and Delilah have constructed to section off their personal problems begins to come crashing down, amidst the spark of a wildfire that slowly burns across their Wyoming forest escape.

Firewatch is at its best in those moments, where the human elements seem to supersede all else, and you begin to truly feel for the emotions these characters suffer through. Campo Santo’s tale is one that’s more grounded than most stories commonly told in games, and so there’s a lack of grand gestures or pointed twists. Most of the narrative is easy to see coming, and so the inflection is not in the “gotcha” moments, but in the way it sickeningly treads on, and then demands you continue to soldier on long after.

Radio conversations happen frequently, and while many are optional, they all build on Henry and Delilah’s relationship.

It isn’t all tragedy, though, as the backdrop of Firewatch has a great deal of comedy and joy. Henry and Delilah often banter back and forth, and the dialogue is delivered well, giving life to two characters whose true face you never see outside of a handful of etchings.

All this is set against a gorgeous wilderness, where sweeping ravines and deep caves meet lush forests and colorful collages of leaves. The wilderness is teeming with life at every turn, yet rarely feels cumbersome or confusing to navigate. Exploring through the wilderness in Firewatch is like finding a new painting at every turn. This is a truly beautiful game, though the PlayStation 4 struggles to keep up with the performance of the PC version. While the PC can maintain a stable and impressive display on most modern systems, the PS4 often chugs and hitches, even crashing on me once during my time with the game.

Those hitches are possibly one of the few detractors from this story, though, as otherwise Firewatch manages to portray a painfully human notion in game form. The feeling of running from your problems, escaping to nature to find wisdom and guidance, only to see that a fire can’t be so easily contained is very relatable, and one I mulled over time and again.

The wilderness is beautiful, stunning at times, and Firewatch’s vistas are something to marvel at time and again.

As the mystery grows and conspiracies and questions abound, the main crux of Firewatch is still Henry, and in the ways that Campo Santo reminds you of the greater blaze that Henry tries to cordon off with smaller fires. Though the ending may falter in some ways and end in a less grandiose manner than you might expect, it’s the striking abruptness that has stuck with me. It isn’t some great expression or orchestrated finale, but simply a tying off of a few loose ends and cut to black. It’s fast, unsympathetic to the audience, and exactly the kind of thing that sticks in your mind for nights to come.

Firewatch is a beautiful story of escapism and loss, set against the beautiful Wyoming wilderness. The physicality of your interactions, the excellent radio conversations, and poignant writing and imagery are hindered only by slight issues in presentation and technical hitching. It’s grounded, human, and one that you’ll be eager to talk about for days after the credits roll.