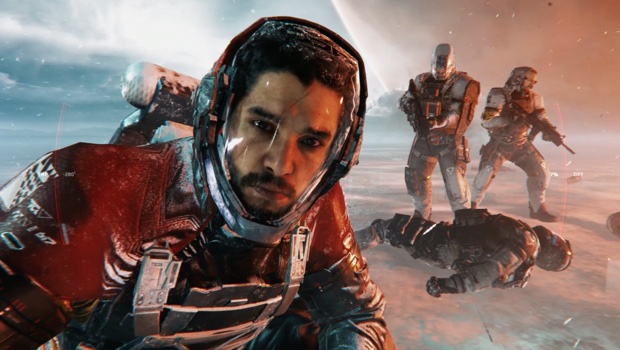 One of the things that typifies a Call of Duty game is the fact that it’s really three games on one disk, each of them a fully realized experience that could almost be a release all on its own. This year’s installment, Infinite Warfare, is no different, and while multiplayer usually dominates the conversation, I’d like to urge players to give what I consider the best and most fully realized campaign mode of the entire franchise a chance.

Infinity Ward has basically given us Battlestar Galactica mashed up with Halo, and, well, Call of Duty. Mankind has gone interplanetary, at least within our solar system, and Earth’s colonies have coalesced into a highly militarized faction that calls itself the Settlement Defense Front. It’s a tight blend of narrative exposition and well executed set pieces, and Infinite Warfare poses an interesting take on our future, especially in light of recent headlines regarding advances in spaceflight and colonization of other planets in our solar system. Equally stunning is the level quality and variation of gameplay; action is split between “boots-on-the-ground” gunplay and the Jackal’s arial/space combat, often seamlessly transitioning between the two. Space combat is surprisingly gratifying, whether you are engaging in one-on-one dogfighting against enemy aces or taking down destroyers and capital ships. The non-linear story progression works well with the setting, giving the player a holographic map of the solar system to select main story missions and side missions. Some of the side missions are surprisingly good, with one dropping you off in an asteroid field with a sniper rifle. It was quite honestly the moment I realized this campaign was something special. Side missions aren’t just fun, though; they always yield a very useful upgrade to either your Jackal or your gear. I can’t imagine I would have had as much fun taking down enemy destroyers without the cannon upgrade I got for my ship after one mission. The main storyline is about average length for a Call of Duty game- roughly 6-8 hours, and the third act goes in some unexpected directions. By the end of the game I caught myself missing some of the characters that didn’t make it and wondering where the story would go next.

If you’re hoping that some of the more compelling gameplay elements of the campaign carry over to competitive multiplayer (and you will be after you play the campaign), you’ll be very disappointed. With no aerial combat and no zero-G combat with grapplers, there’s only the barest connective tissue between the two modes. If you’re expecting an incremental progression from Black Ops III multiplayer, however, you’ll be very happy, as Infinite Warfare builds on its predecessor with tweaks and advances to the formula in its own direction enough to keep things fresh. Thrust jumps, sliding, and wall running are all brought over from Black Ops III, along with standard staples of the series like scorestreaks. The core playing style hasn’t changed much, though there are a few new match modes. My favorite new mode was Defender, a clone of Halo’s Oddball, where players are supposed to capture the ball drone and hold onto it for points. Staples like Kill Confirmed, Domination, and Hardpoint are all present, and in all there are a whopping nineteen modes to choose from. All twelve of the multiplayer maps are visually stunning, with standouts set against exotic sci-fi backdrops like a black hole (Mayday) or an interplanetary shipyard (skydock).

The progression and upgrade systems have been fragmented and are frankly a little obtuse, however. The game splits out different upgrade paths into different buckets, allowing for a wider range of character possibilities, but it’s a little hard to keep some of it straight, as you’re typically progressing through at least four or five tracks at any given time. Infinite Warfare’s version of classes are called Combat Rigs, six total, each with their own upgrade path and unique loadout and ability upgrades. Mission teams are a another layer of progression and reward on top of the standard ranking system. There are four of these, and each has a series of objectives and achievements keyed to specific types of gameplay. Every round you earn keys and salvage, two forms of pseudo currency that complement actual funny money that can be purchased with real money. These currencies allow you to upgrade weapons into prototypes with built-in add-ons, equipment upgrades, and cosmetic enhancements, as well as purchase supply drops (which in turn yield all of the above). Throw in individual weapon progression and the standard ranking system and you’ve got a lot to keep track of. I realize that player expectation for customization and progression rewards systems is high due to the competitive nature of online gameplay, but this just feels overly complex and may be a barrier of entry to new or occasional players.

Besides the single-player campaign, the other standout component of Infinite Warfare lies in this year’s Zombies installment: an 80’s amusement park/ B-movie nostalgia-fest, Zombies in Spaceland. Between previous Zombies offerings and the current level of zombie over-saturation in pop culture, I was inclined to dismiss it out of fatigue. Being a child of the eighties, I found I couldn’t resist the tacky Day-Glo pastiche of the setting, and by the time I heard Paul Ruebens’ voice, I was hooked. With an emphasis on goofy fun over scares, Zombies in Spaceland ends up being a great contrast to the bombastic seriousness of the rest of the game. As our crew unlocked area after area of the theme park, I was struck by how reminiscent the map design was to the more eccentric levels of, of all things, Tony Hawk’s Underground (if you replaced the skateboards with guns and zombies). As far as I can tell, the map is huge- my team got as far as eleven rounds and several areas deep before finally succumbing, and it was obvious there was a lot of uncovered ground left. Some of the areas have some really fun features, like a roller coaster that has you shooting targets as well as any zombies that happen to be walking the tracks, or the disco area where it’s almost a shame to have to take out the ones that are getting down on the dance floor. The only place the 80s shtick runs a little thin is in the archetypal characterizations of the four player characters, but once the pace picks up after the first few waves you’re not really paying attention to their cheesy voiceover anymore, anyway. Diehard players of Zombies will likely enjoy the considerably more minimalist progression and upgrade features of the Fate and Fortune cards and weapon attachment upgrades, but they seem more additive rather than necessary like they are in regular multiplayer.

Game was provided by Activision

While Multiplayer feels largely like more of the same with a few new features and a fresh coat of paint, and Zombies in Spaceland is a goofy, funny romp through 80s nostalgia, the Campaign is where Call of Duty: Infinite Warfare really shines. Infinity Ward brings a level of narrative skill to the series not seen before, with a gripping space opera that makes this one of the best to come out of the series in a while.

Mike Dunn is the old man of Gaming Trend, having cut his teeth on Atari consoles and First Edition Advanced Dungeons & Dragons back in the day. His involvement with Gaming Trend dates back to 2003, and he’s done everything from design and code to writing and managing. Now he has come full circle, with a rekindled passion for tabletop gaming and a recent debut as Dungeon Master (nearly forty years after he purchased the original DMG).
Related Articles: Call of Duty: Infinite Warfare
Share
Tweet
Share
Submit