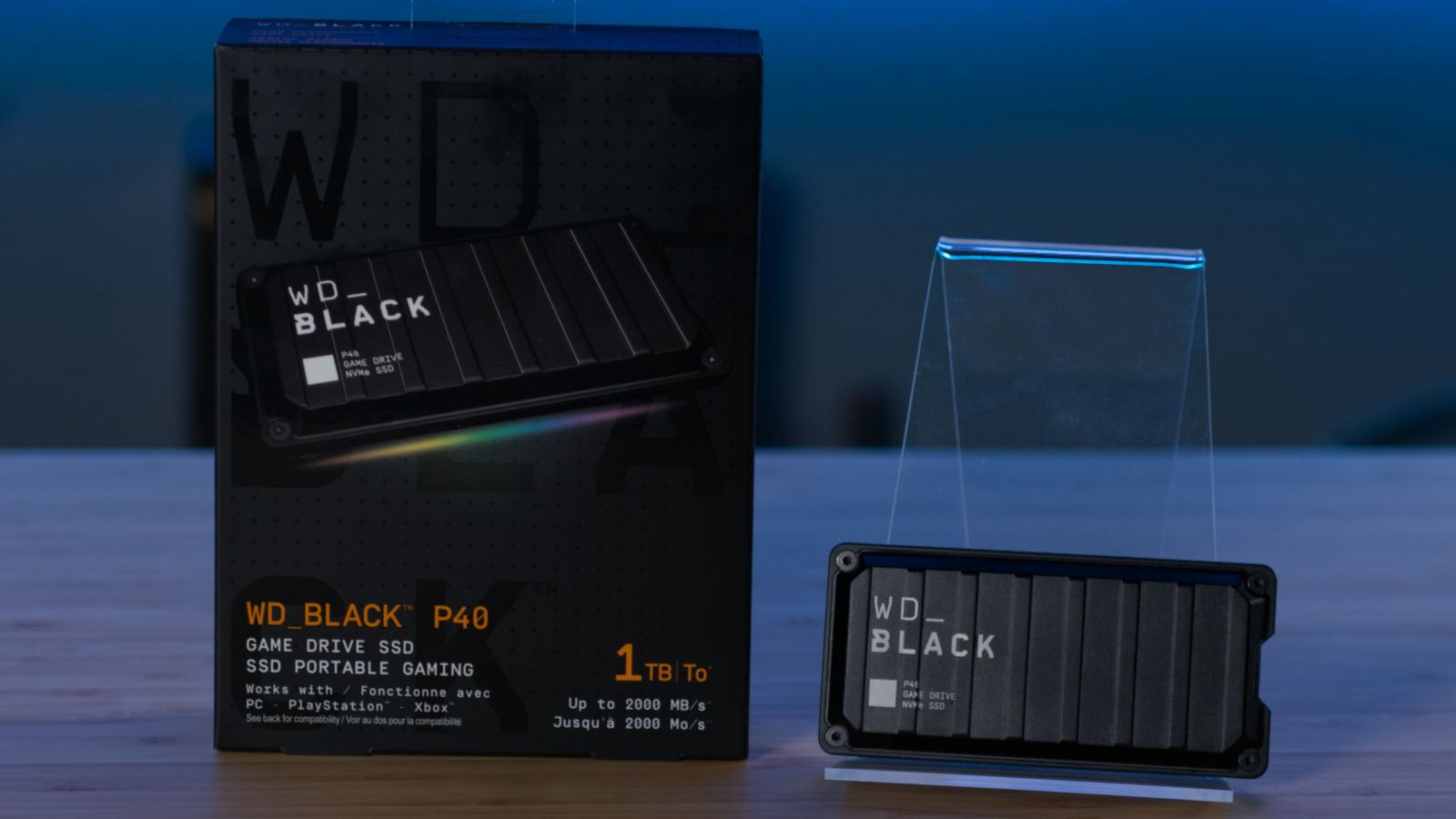 We are in an interesting time in the storage space. Thumbdrives are everywhere, but that’s starting to change. As the price of high speed SSDs come down, their capacities expand, and high speed interfaces catch up in the mainstream, I’ve stopped recommending thumbdrives entirely. Frankly, they are just too slow, and there are far better uses of your time. Western Digital agrees, and they’ve introduced drives like the WD_Black P40 to further expand your high speed storage options. Let’s get into the use cases, and what makes this a huge step up from their previous entry – the D30.

The P40 is branded as a gaming drive, and thanks to its high speed archiving capabilities, that means you can use them on your PC as well as your shiny new Sony or Microsoft console. Like the D30 before it, the P40 works perfectly on PlayStation 5 or Xbox Series X/S, providing fast storage for hot copies of your games that you can swap into the M.2/Internal storage of the console, or to play PS4 and Xbox One games from the drive natively. This means games like Spider-Man: Miles Morales can be archived, though not played from this drive, but can be moved quickly onto the more expensive internal storage on both platforms so you don’t have to download the entire game and patches all over again. This is crucial if your ISP has any sort of hard cap or throttling on your download capacities.

When playing previous-generation games, you’ll see a pretty marked improvement in drive speed. The mechanical hard drives in the previous generation of consoles maxed out at a read and write speed of roughly 100MB/s, resulting in some fairly lengthy initial load times, but fast enough for streaming worlds like The Witcher 3. As you’ll see below, we’ve got speeds well in excess of double that of the D30, meaning you’ve got enough horsepower to load the game as fast as the engine will allow – you’ll be happy with your previous gen performance here. 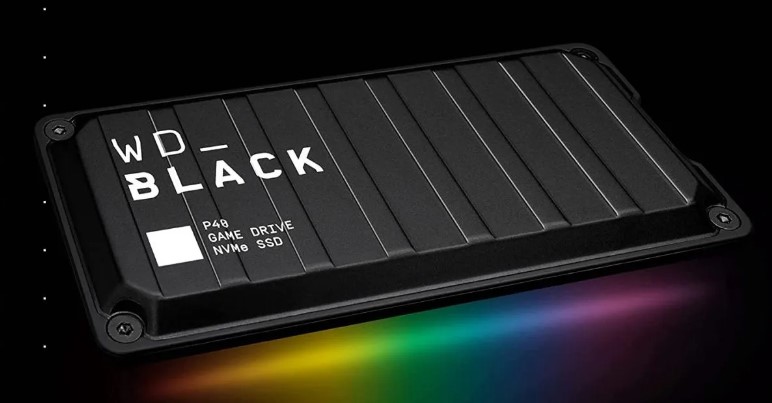 To achieve maximum performance, whether you are using this for previous games or current, you’ll need to use a USB 3.2 Gen 2 port. The Xbox Series X/S and PlayStation 5 both sport Gen 2 ports (you’ll want to plug into the back of the PS5 — the front ports cap out at 480MB/s), so you won’t have to worry about speeds there, but the Xbox One and PlayStation 4 are both USB 3.0, so that 500MB/s we saw on the D30 when plugged into those consoles was as good as it’s going to get. You can thank the IEEE folks for making USB as confusing as humanly possible.

One of my favorite aspects of the WD_Black P40 is it’s size – it’s tiny. So tiny, in fact, that it can slip comfortably in a pants pocket without being uncomfortable. At just 4.21″ x 2″ x 0.51″, it also fits easily into a side pocket on a backpack, and anything I can do to de-bulk my grab-and-go travel gear is a win in my book.

Heading over to the PC we have more tools to really put the device to the test. If you’ve checked out our hardware reviews in the past, you know our primary staples are ATTO and Crystaldiskmark, though with Western Digital there’s an added bonus – the WD_Black Dashboard. As you’ll see in the video above, this dashboard allows you to upgrade firmware, monitor usage, warranty, temperature, and remaining estimated lifespan, and it gives a very accurate view of the performance of both read and write. Naturally, given that it’s 2022, you can also adjust a small RGB strip to maximize speed.

Firing up the WD_Black dashboard I can see all of my drives, their interface speeds, health, capacities, temperatures, and firmware levels. I can also see if a drive becomes unhealthy, as well as access tools to help resolve those issues. In this case, we are interested in the Performance Tab. Running side-by-side with ATTO and Crystal Diskmark I fired up benchmarking on the P40, and wow does it deliver. As you’ll see below, it delivers some serious read and write speeds, hitting 1.84GB/s for any file size larger than 512 KB, and maintaining that all the way up to chunks of 64MB. Better still, it does so while holding up a write speed nearly as fast – 1.68 GB/s for those same file sizes. 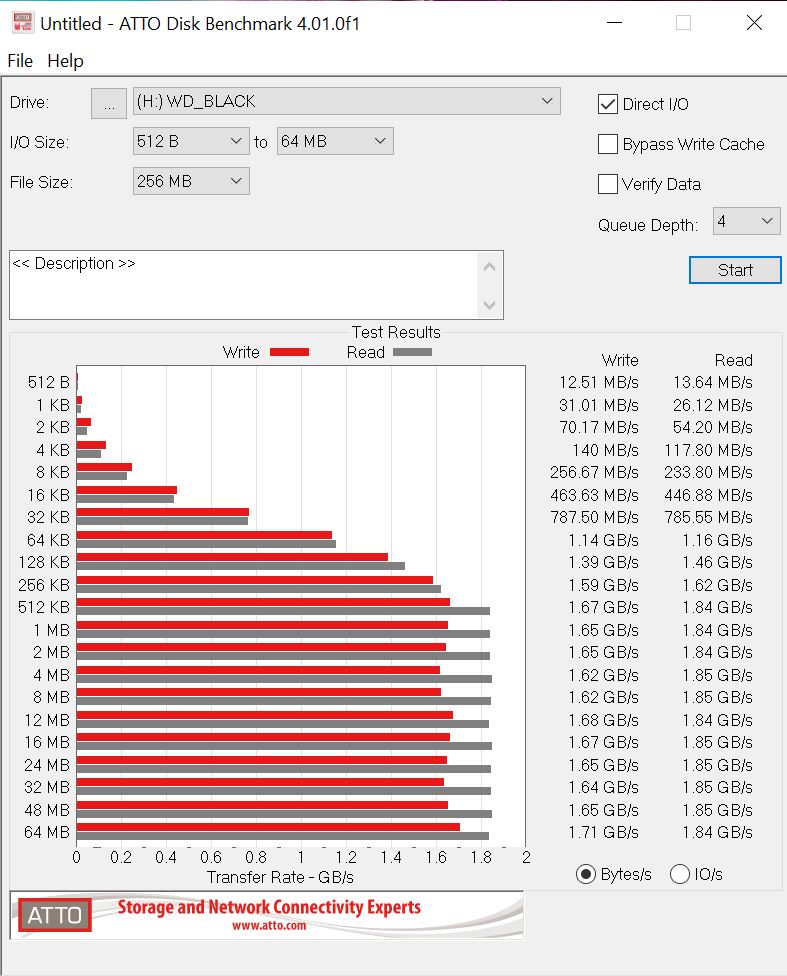 ATTO and CrystlaDiskMark agree with what Western Digital’s own Daskboard is reporting, but I wanted to get some additional information about the drive, and I knew precisely the utility to do it – 3DMark’s Storage Benchmark. This utility focuses on real-world gaming performance, as well as providing some basis for comparison against other drives. Sequential drive usage is easier to quantify as it’s literally about whether a drive can hit a theoretical maximum or not, but having at least some level of repeatable performance simulation is important. While it does focus on SSDs primarily, there are a number of external drives in here as well. It’d also provide the first of our benchmarking database for external drives. Without further ado, let’s get to the tests.

An extensive test, 3DMark’s Storage Benchmark runs sims like recording in OBS at 1080p while playing Overwatch, launching Battlefield V from the main menu, or loading Call of Duty Black Ops 2. Ultimately, like other 3DMark products, it comes up with a score. The WD_Black P40 Game Drive delivered a score of 1056. For basis of comparison, I benchmarked some of the SSDs I had on hand, including the predecessors to this drive – the D30 and the P50, as well as a direct competitor in the Seagate FireCuda SSD. 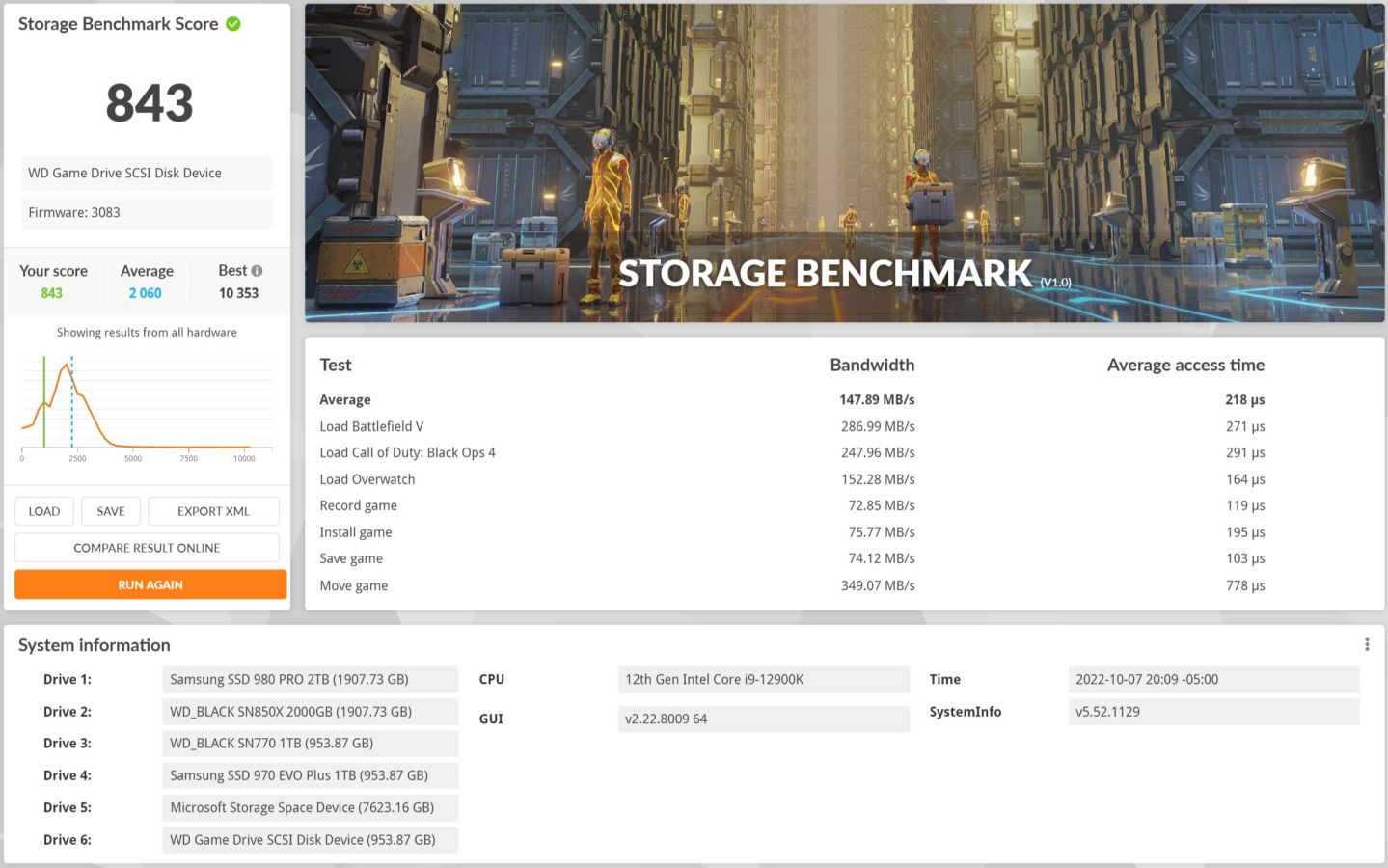 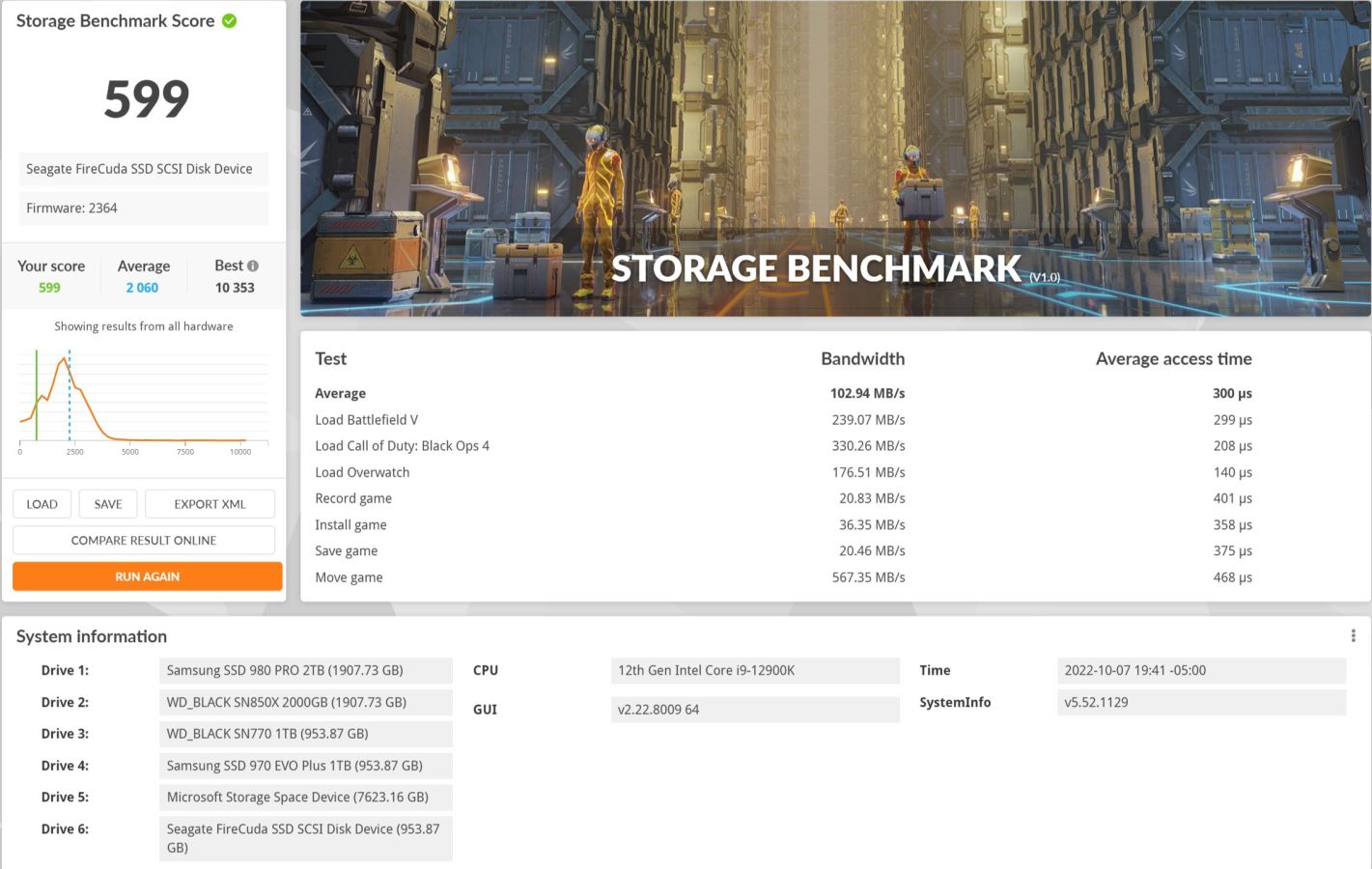 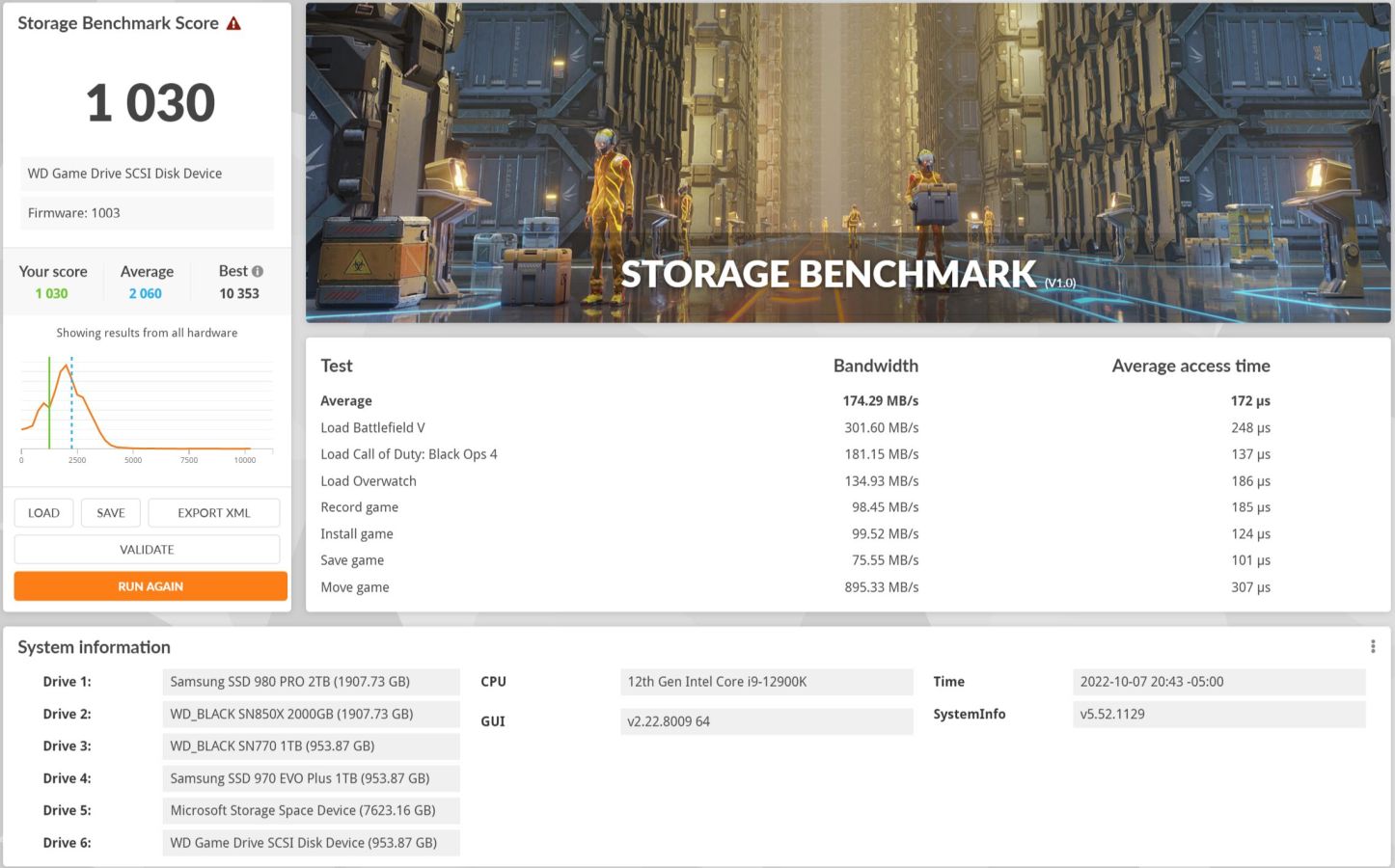 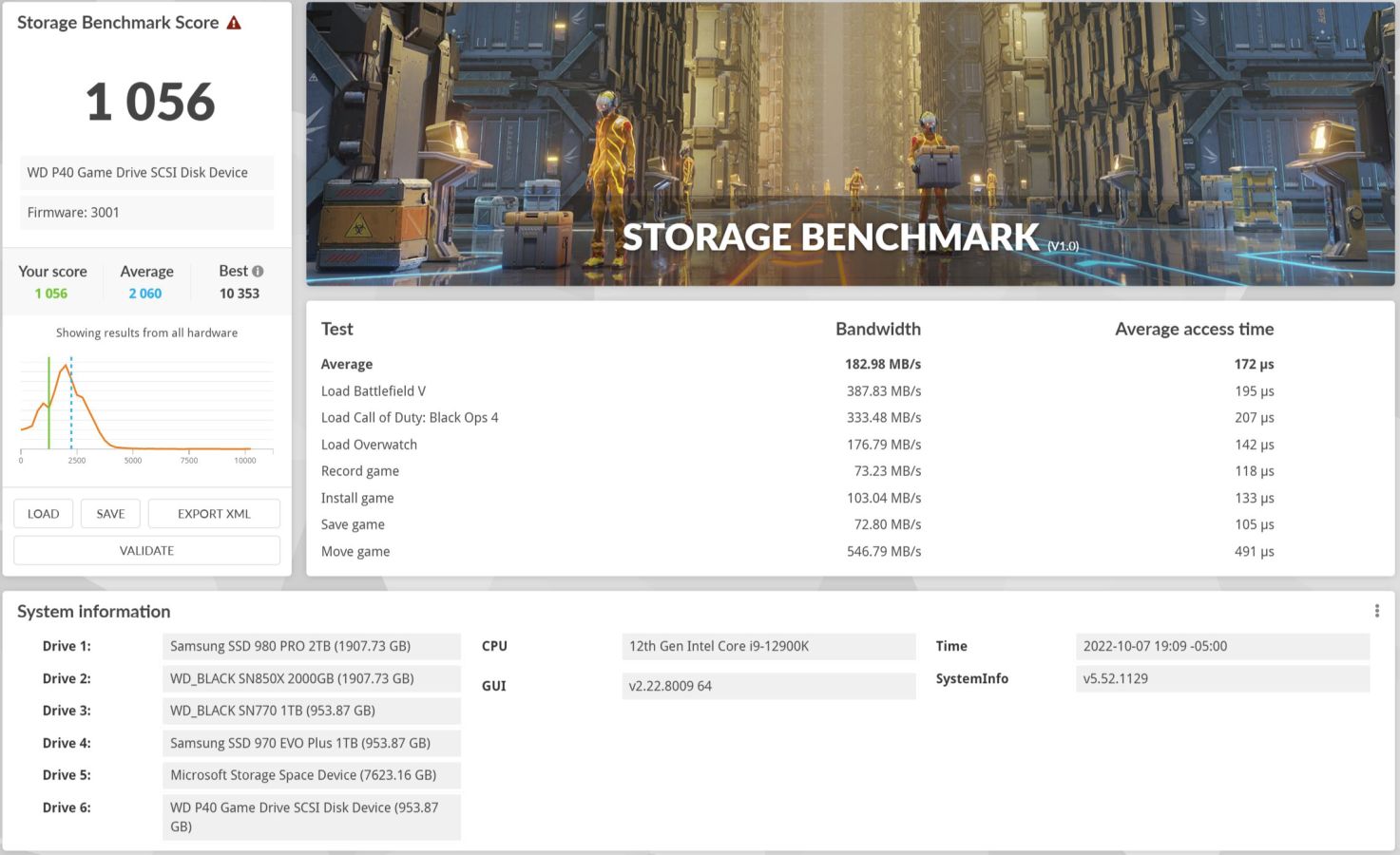 It’s easy to see the iteration Western Digital has done, even within their own product lines. Each one is a significant improvement over the previous, and they are easily doubling their nearest competitor in theoretical speeds as well as real-world simulations. We see this backed up in practical everyday use where file copies are dramatically improved. In these benchmarks we see that only the larger version of this device, the P50, compares, and even that is a few points shy of the P40.

For frame of reference, we see roughly double those scores out of an NVMe, which tracks as they are generally speaking roughly double or more in speed. It’s an unfair comparison, but it does provide some context for where these scores land in the grand scheme of things.

So what does all of this tell us? Well, it’s pretty plain to see that the P40 is an absolute monster of a drive. It’s delivering speeds approaching a mid-tier internal NVMe drive, and that is impressive given the price, portability, and form factor.

As with all of my hardware reviews, I’m a stickler for warranties. The WD_Black P40 comes with a robust 5 year warranty. When so many drive manufacturers offer 3 years, 1 year, or worst of all, just 90 days, Western Digital is standing behind their product in a big way. This is fantastic news if you hold onto your systems for their full lifespan.

The WD_Black P40 comes in three different size varieties to fit your needs — a 500GB model, as well as a 1 and 2 TB variety. The 500GB drive will set you back $119.99, whereas the 1 and 2 TB versions will cost you $179 and $329 respectively. Of these sizes, the 1TB model feels like the right balance between cost, capacity,and performance, but using it as an external drive on my Steam Deck I have to admit that a little extra room goes a long way. The included cable is a little stubby at just one foot in length. Thankfully it’s just a USB-C cord, so just make sure any replacement you get is USB 3.2 Gen 2x2 capable – here’s the one I used for these tests.

The WD_Black P40 Game Drive may be a smaller incarnation of the P50, but the fact that it runs cooler, is more travel-ready, and delivers on its 2GB/s promises is impressive. Provided you’ve got the UBS 3.2 Gen 2x2 interface to take advantage of it, this drive is going to blow you away.

Ron Burke is the Editor in Chief for Gaming Trend. Currently living in Fort Worth, Texas, Ron is an old-school gamer who enjoys CRPGs, action/adventure, platformers, music games, and has recently gotten into tabletop gaming. Ron is also a fourth degree black belt, with a Master's rank in Matsumura Seito Shōrin-ryū, Moo Duk Kwan Tang Soo Do, Universal Tang Soo Do Alliance, and International Tang Soo Do Federation. He also holds ranks in several other styles in his search to be a well-rounded fighter. Ron has been married to Gaming Trend Editor, Laura Burke, for 21 years. They have three dogs - Pazuzu (Irish Terrier), Atë, and Calliope (both Australian Kelpie/Pit Bull mixes).
Related Articles: Hardware, WD_Black P40 Game Drive
Share
Tweet
Share
Submit