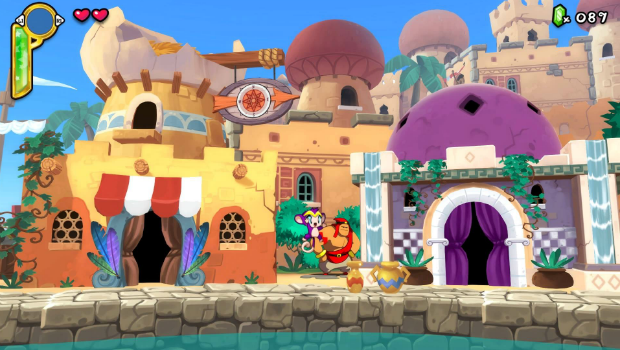 It’s Shantae! She’s here to save the town, but the town’s problems are a little too big for her cliche genie breeches. Platforming, belly-dancing, trancing out, and flailing her hair, Shantae does work in Shantae: Half-Genie Hero and through some madcap comedy, serious danger, and lots of help from friends, that work leads to a very fresh and surprisingly difficult platformer that oozes creativity and simple, cartoony fun. A few minor issues hamper the game at times, but other than that, it’s a title that provides a high quality look, feel, and overall experience. Larger than life boss battles, highly challenging, and fairly unique, Shantae: Half-Genie Hero is a delightful game for any 2D platforming fan.

Shantae, a half-genie, is the protector of her hometown, tasked with fighting away monsters and pirates. Her uncle is building a machine that will provide electric power to the town, thus eliminating the need for her to work as protector all the time. However, a series of events cause trouble for Shantae and her fellow townspeople, forcing Shantae into one last heroic jaunt.

The town is a home base for Shantae, where she can shop, get new missions, look at hints on current objectives, and travel to in-game zones. You can also save the game here. This area is a little too spread out for me, and feels a little like a really slow menu. However, I like that the townspeople are actively in the streets doing different things at different times in the game, making it feel a bit more alive and active, as well as giving you quests to complete.

From there, Shantae enters into different zones, each with different obstacles, enemies, and secrets to discover. The game is a standard , true-to-form 2D platformer, lacking most of the gimmicky nonsense that I’ve seen in recent fare. You move left to right, passing through different areas, avoiding pitfalls, and working through enemy patterns that become increasingly intense as the game moves along.

Shantae uses her hair as a weapon, whipping it at her enemies with high velocity. It feels more like a “sword” type than a “whip” type weapon, but it is effective nonetheless, and has a decent range. Shantae also has a dance move that has a quick effect of freezing time and showing what’s happening around you. The dance’s actual function, however, are various transformations that turn Shantae into a monkey, crab, elephant, and other forms to complete various tasks, jumps, or deep dives.

When playing a zone, you’ll notice different areas that are currently unreachable, but later once you have the correct form, you’ll be able to return and pass through. The game also does a magnificent job of implementing the forms’ usefulness in the zones themselves. I used the monkey form for a majority of the time, which makes Shantae quicker and jump higher, but renders her unable to attack. The game forces you to weigh the ability to defend yourself with the ability to move quickly, and often times, any form will work with high level execution.

The game does suffer a bit from wild controls, and there seem to be an inordinate amount of instances where you’ll have to select between being hit one way or another way when passing through difficult corridors in-game. The enemies are rather bland and a bit too static for my tastes as well. There are times where I feel the game is too easy, and then all of a sudden a portion will come up that is far harder than needed. The difficulty progression seems inconsistent at best and schizophrenic at worst.

The boss battles are by far better than the standard combat throughout. Fullscreen bosses, be they living ships, giant, furious mermaids, or cavernous memory-eating mind worms, each boss battle gives the player a chance to experience something new and unique, a nice reprieve from the other fare between encounters. Despite their creative designs and very fun ideas around how to attack, the boss battles are incredibly simple and, despite one very difficult encounter, are noted for their graphical flair rather than their challenging difficulty.

Part of the mystique of a 2D platformer is in those impossible to defeat bosses, and without that, there is a chip in the patina on what is really otherwise a very nicely presented and modern platforming game. The game has a Saturday morning cartoon style that pops on the screen and fits the comedy of the game to a T. The story is presented with lots of campy humor and fun, and the music, while not a standout in the experience, does a fine job of setting the tone and feel of each level and encounter. The game is also available as a PlayStation Vita release, and the versions of the game are virtually identical.

Shantae: Half-Genie Hero is a highly familiar, yet fresh take on 2D platforming, and the results are a game I can easily imagine scaled down to 16-bit on a Sega Genesis. A nostalgia hound for the 90s will find a lot to love with this game, from the gameplay down to the look, feel, and story it presents. Far from perfect, but charming beyond its expectations, Shantae: Half-Genie Hero is wonderfully fun.

Patrick Rost has been with Gaming Trend since 2013. At first focused on sports coverage, Patrick has gone on to cover a wide range of games and other products for the website. Outside of Gaming Trend, Patrick writes and records music, grinds perpetually in Elder Scrolls Online (PS4), and lives day to day with his two dogs, Bob and Stella.
Related Articles: Shantae: Half-Genie Hero
Share
Tweet
Share
Submit