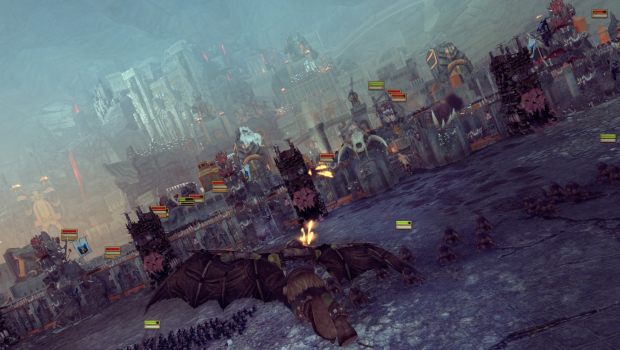 Neverending war. The perennial military complex, gears turning to amass conflict after conflict, as generals loom over a table dotted with markings and figures. Much like a Black Sabbath song, the conceit of the eternal struggle is daunting, and yet it’s also one of the most alluring aspects of a series like Total War.

It makes sense, then, that a tabletop series so known for its brutish, neverending conflicts between various races and species would become a part of this franchise. Warhammer is one of the most perfect fits for the Total War series yet, and stands as one of the highest points for the series since the early days of Rome.

From the outset, your only options are to either tweak and tune options (this is a PC game, after all) or immediately plunge into war. The nature of these conflicts ranges between either a long campaign, filled with army management and strategic maneuvering, or a simple jaunt through one of the Warhammer series’ most iconic battles.

For the campaign generals, there’s a lot to pick through. There’s only four races to select from at the outset, with a fifth coming shortly after launch, but the diversity is enough that each will create radically different world states to conquer. The Empire of Man, staunch and resilient against the darkness, boasts proudly with their heavy cavalry, wizards, paladins, and steam tanks. Greenskins, a faction of orcs and goblins, oppose their righteousness and refinement with primitive tools, powered solely by bloodlust and belief. The Dwarves hide away in their mountain homes, content to hold the line with their powerful artillery and stave off the bloody campaigns rather than participate in them. And among the death and decay rise the Vampire Counts, an undead army built on the backs of fallen soldiers and twisted necromancers.

The campaign adds a bit of flavor to the action, though it sometimes still feels like a means to an end.

This is High Fantasy at its peak, content to play into the many tropes that Warhammer itself has perpetuated through decades of tabletop play. Developer Creative Assembly had its work cut out, trying to adapt a game based around tape measures and painstakingly hand-painted miniatures and making it fit within the Total War mold.

Unsurprisingly, Total War: Warhammer feels like the perfect marriage of two franchises. If anything, it’s even liberating — there’s no effort to conform to historical standards, no need to perpetuate a sense of plausible accuracy to true events. Warhammer has always been a bloody fantasy, and the neverending war complex of Total War thrives in the chaos.

This is best seen in the ways that the races diverge from one another. In other Total War games, mild differences were the only distinction between commanders and armies. Other than banners and names, you could only identify one nation as having slightly more effective archers, or moderately heavier armor. In Warhammer, the playbook is opened again and more judicious changes can be made.

My favorite race, the Vampire Counts, lacks completely in ranged characters. Not a single fighter in my undead legion could throw, launch, or hurl something further than a few inches in front of their reanimated face. But in lieu of missiles, I got necromancy; powerful spells could raise my minions from the dead to fight again, crypt ghouls struck terror into the hearts of enemies and forced them to flee, and my Feral Bats darkened the sky and ripped any enemy archers to shreds.

One of the new additions to the series is the concept of magic itself, and the powerful sorcerers who wield it. While emperors of Rome never tossed thunderbolts, the wizards of Warhammer can call down comets from the sky, inspire troops to fight even harder, or just rely on the classic Magic Missile. Some more brutal spells have ever more interesting effects; I came to really enjoy the Curse of Years, a spell my necromancer Heinrich Kemmler could cast that literally aged an entire battalion by decades in mere seconds. That might be one of the meaner ways to kill foes, but in Total War: Warhammer, it’s all metered out by a pool of magic that builds gradually over time. Magic, thankfully, hits the sweet spot of impactful but balanced, and raising an army of dead right on the spot never feels more powerful than it should.

Massive battles are a true spectacle.

Total War: Warhammer excels in those moments, when these diverse armies are throwing different incredible, dynamic units at each other. Just zooming into the fray and watching as an Emperor fights a dragon, or a pre-industrial tank rolls into an oncoming cavalry charge, is exciting in a manner reminiscent of the best parts of High Fantasy warfare. Strategy is managed well enough that unit composition still matters, especially later in campaigns when unit diversity grows — cavalry can annihilate infantry unless they have spears, and artillery can unleash hell so long as they’re well protected. The incredible moments of explosive battle still happen, but you’ll still lose if you bring a spear to a sword fight.

It’s a little disappointing that, at least in the campaign, those moments are a bit more spread out than you might prefer. For every major battle I fought, there were several more I simply auto-resolved due to the paltry nature of it. A major castle siege or sudden ambush is exciting, but watching my army slowly roll across a plain to smother an enemy five times their lesser is a chore, even at three times the normal game speed.

There’s a solitary hero unit somewhere in the middle there.

There’s some occasional hitching and issues as well, none significant enough to write down as larger, but load times could get a little long on my mechanical drive. A solid state drive was the easy solution to this, and made the bar sail by without a hitch; but your rig, as with most PC games, will be the deciding factor between gorgeous, scenic battles and hitching dots punching each other.

Many campaigns drag on in the middle as well, as you’re done resolving your immediate territorial issues and trying to create the swirling deathball that will roll over your bigger enemies. It took me until halfway through my second campaign to fully understand how some mechanics worked as well, and I often hoped for a little more explanation or visual feedback. “Deploying” a hero unit made little sense to me until I delved deeper into the (purely compulsory) game guide, and even then, I barely understood the benefits of certain actions for a good while. Diplomacy also falters, and frankly felt superfluous; Total War is about the eponymous sense of neverending conflict, and there’s no victory condition for exploring the arts and sciences. Most of the time, diplomatic action felt like a method of pacifying enemies so I could annihilate them piecemeal, rather than fight all of them at the same time.

You can jump into a siege or ambush scenario straight from the menu screen.

For those who would like to avoid the planning and maneuvering, iconic battles are available to simply jump into and play through, and serve as a much quicker method of getting your cathartic fantasy fix. You can use a pre-determined army or arrange your own, and I really enjoyed acting out different sieges or fights in different ways, exploring the ways that certain spells could turn the tides of battle or whether my massive undead horde could overcome any obstacle. (They usually did.)

In many ways, Total War: Warhammer is the kind of freeing experience that historical strategy games have pined after. There’s no limitations here, no need to play equals or favorites. You don’t have to re-enact Hannibal’s attack on Carthage, or Nobunaga’s conquering of Japan. In Total War: Warhammer, there’s freedom to follow a set lore, or to develop your own; as long as it contains blood and orcs, it’s canonical enough. For tabletop fanatics, armchair generals, or anyone who’s seen Lord of the Rings and wanted to recreate Helm’s Deep, this is your fantasy Ragnarok, and with mod support and future races to come, chances are you’ll be plenty sated for the long haul.

Total War: Warhammer mixes computer and tabletop effortlessly into a fantasy bloodbath. With four diverse races, plenty of character and a promise of much to come, it’s hard to not recommend this to anyone who’s ever dreamed of playing armchair general in the High Fantasy realm.