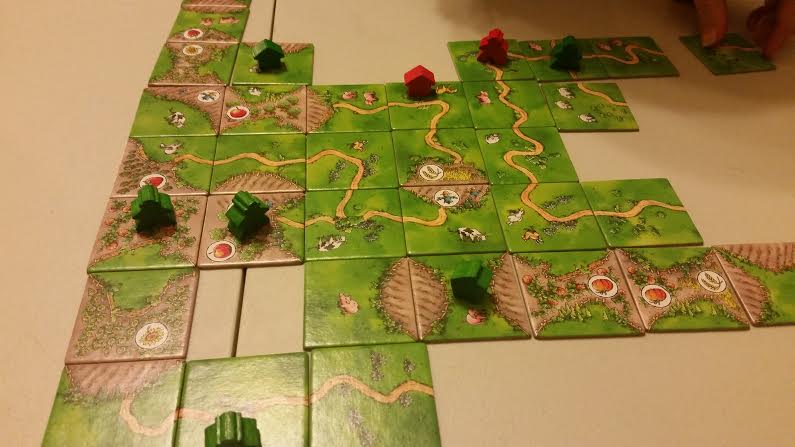 There was a time before the current boom in board gaming that being a gamer meant you liked to break out Monopoly or play a spirited game of Boggle. Gaming has evolved and some of the non-mass market board games have crossed into the mass market consciousness. Ticket to Ride, Settlers of Catan, and Carcassonne certainly fit this description. Not surprisingly, each have spawned numerous expansions and standalone versions to take advantage of this success. It would be hard to find a gamer today that hasn’t been exposed to one if not all of these three gaming giants. While I have played the former two, opening Carcassonne: Over Hill and Dale was my first experience with the series. These fresh eyes learned two things from my initial playthroughs. First, I can understand why Carcassonne had such universal appeal, and, secondly, I’m really bad at playing Carcassonne.

Admittedly, my initial impression was not a positive one. The rules have campy expressions like “gently guide you through” that made me wonder if I was playing a game or getting ready for a trip to the spa. After reading the rules, a whopping six pages, I understood the lightheartedness of the tone reflected the ease of the rules. This isn’t a heavy handed strategy game. Carcassonne is meant to be a relaxing, yet thinking, experience.

Carcassonne: Over Hill and Dale is a tile laying game. Players take turns selecting a random tile and placing on the board so that it fits with the landscape of the current tiles on the table. In Over Hill and Dale, tiles have roads, meadows, and fields. If a right edge of a tile has a field, then the left side of the tile laid next to it must have a field edge to match.

As the game progresses, completing an oddly shaped field can become quite a challenge.

Turns flow as easily as the concept. Players place the tile, then decide if they want to place one of their meeples on the just laid tile. Players can claim control of roads or fields and score points when either of these are completed. Both are typically claimed by a sole player unless two claimed roads or fields end up running into each other later. The tile laying is quite easy early in the game and ramps up in difficulty as the table becomes cluttered. Luck does play a significant role in the game since forward planning comes down to the whim of a tile draw. In one of my games, I laid in wait for one tile, an albeit unique one, that would complete a massive field. The last forty odd tiles came and went with none coming to help. The result was a jubilant nine-year-old claiming a victory over her dad. The lesson learned was that planning is good but don’t count on obscure tile to save the day. Lady luck may not be on your side.

Outside of this standard game play are a few added twists, some of which work quite well. The best addition is that of the stable. Players may choose to place a stable in lieu of a meeple. Stables score points at the end of the game, one for each animal in a meadow in the eight tiles surrounding the stable. It adds another layer to the decision on where to place tile, especially when proper placing could result in another dozen points or so at the conclusion of the game.

Another interesting feature is the use of fields. Fields score double that of roads, making them very valuable. Within some fields are symbols for various fruits and vegetables. Claiming a field that contains one or more of these symbols scores you a token matching that particular food. These are also scored at the end of the game, with bonuses awarded for complete sets of one from each of the foods on the board. In general, this makes for some interesting placement as fields can twist and turn and end up joining multiple players together. However, several tiles allow for a quick back-to-back placement of fields. Since meeples are placed before scoring occurs, this can give a player a cheap four points. It won’t happen often enough to be anything more than an annoyance, but it could be exploited in the right circumstances.

The game’s bright colors and cartoonish illustrations make this a great game for younger Carcassonne fans.

One final addition to the game is the use of wanderers. Instead of placing a meeple, players can choose to have their meeples wander down unfinished paths for points. By this, there’s absolutely no incentive to finishing a road yourself since you’ll score more points in the long run by simply wandering aimlessly up and down the unfinished road. This will cause other players to stop their own plans to finish their roads for you just to get your meeple off the board. Perhaps that’s the strategy since roads are woefully undervalued compared to fields and makes them a bit more enticing. I don’t believe they add a tremendous amount to game play, but others may find the additional option welcome, especially when meeples are stranded waiting for fields to finish.

The colorful meeples, fruits, and vegetables, along with the cute illustrations of animals dotted along the landscape, should make these very appealing to children. The game would make a good introduction into the Carcassonne experience.

I can see the appeal of the game. The game comes with over 70 tiles to lay, but the game flows very smoothly. The rule set is absurdly simple, and the elements of the game can be appreciated by both children and adults. For its price, the production value is pretty good. You can get a lot less for a lot more. Yet, unless you are a huge fan of the series, wanting to introduce children to the game, or like me and new to the experience, is there a reason to own yet another version? It’ll depend on how much you like the game’s mechanics. I’m happy to have played this game, but I’m not sure I’d need a shelf of them.

Carcassonne: Over Hill and Dale

The tried and true Carcassonne formula shines through in Over Hill and Dale. The playful design will appeal to children, and there are a few interesting tweaks unique to this game. This would be a good introductory game to the Carcassonne world. Still, there's nothing overly innovative in this version so owning another copy of this game may come down to how much you like the mechanics.

Nick grew up with games like Axis & Allies, Fortress America, Samurai Swords, and Statis Pro Football. After a life hiatus to work and start a family, he rediscovered his passion for gaming in 2012. Originally a war gamer, he now appreciate different genres and enjoys exploring great game systems.
Related Articles: Carcassonne: Over Hill and Dale, Tabletop
Share
Tweet
Share
Submit