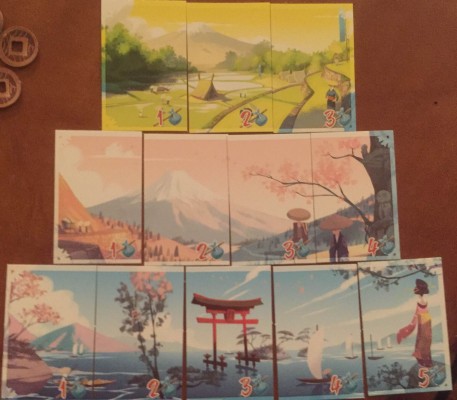 There is only one word that can adequately describe Tokaido: Zen. It is a relaxing and simple game. Players are pilgrims traversing the Tokaido road, the scenic route between Edo and Kyoto. The winner of Tokaido is the pilgrim who most benefitted from this trek.

The board of Tokaido is represented by a long line, with multiple rest stops along the path. There is no turn order in Tokaido, instead it is always the pilgrim who is furthest behind on the road that takes a turn. That player moves their piece to any open space, up to and including the next inn location (represented by a lovely dish with five spaces below it). In a two or three-player game, all locations have one space, while, in a four or five-player game, a little less than half the locations have two spaces. The player who activated will claim the reward of the space they landed on. If that player is still the furthest back in the line, they act again, otherwise the player who is the furthest back on the line will take a turn.

The main decision in Tokaido comes from deciding how far a player wants to go on the road. There may be a space that looks particularly enticing, but is also far away. So, if a player goes to a distant location, their opponents will likely have several turns before that player who jumped ahead can act again. While if a player goes to a nearby but suboptimal space, the space they were actually eyeing may not be available on their next turn.

The rewards of the spaces are all very simple and logical. Some spaces let players collect pieces of different panorama, and having more pieces of the same panorama tableau gives a player more points. The hot spring spaces randomly give a player two or three points. The farms spaces grant three coins. Coins can be used to make donations at the temple space in exchange for points, with endgame bonuses for players who donate more. Coins can likewise be spent on souvenirs at the village spaces, and players with receive more points for having a varied selection of souvenirs. Finally, the players can randomly draw encounters with other travellers who will grant rewards similar to other spaces.

Some sights a player may visit during the game.

Once a player enters the inn, they cannot leave the inn until all other players have reached the inn. When all players have arrived at the inn, the first person to arrive will draw as many meal cards as there are players, plus one (e.g. five in a four-player game). The first player to arrive at the inn will also have the first chance to purchase a meal card. All meal cards are worth six points, but they do not all cost the same, meaning that players that arrive later may not be able to afford a meal.

Play will continue in this fashion, with players stopping and waiting for the other players when they reach an inn, until all players reach the last inn. There are some other bonuses to the scoring and some unique (minor) abilities players can choose to play with, but the player with the most points at the end is the winner.

Even some light asymmetry.

Tokaido is a simple game. This is an ideal gateway game. The rules and scoring are simple, the iconography is clear, and the gameplay is relaxing. Going out and collecting these cards makes for a very pleasant experience. The graphic design and art are simple and elegant, but also quite striking. It all adds to the idyllic gameplay. The icons on the board should have been bigger, but that is only a minor quibble because the icons are still easily comprehensible. Tokaido is more of an experience than a game, but this is not at all a bad thing. Tokaido sets out to be a light, relaxing game, and it achieves that well. It is great for that light experience.Yet, the decision of how far to go on your turn is still interesting enough to entertain gamers trying to convert non-gamers.

For what it is, I do not see any real issues with Tokaido. The negatives from this game come from the players, rather than the game itself. This is not by any means a hardcore, strategic game, which is fine. However, if this game is played with people who take it too seriously, it loses all of its fun. In Tokaido, your best move may be taken by other players. In a casual game, this is fine because this blocking is rarely intentional and because the mood is light — besides there are plenty of good moves to make. However, in a super competitive game, some gamers will equate playing optimally with actively blocking other players. I do not enjoy that sort of indirect player interaction in general, but it is worse when people play that way in Tokaido. This is not necessarily a negative point, but it just means that Tokaido is highly group specific.

Tokaido is a great gateway for anyone looking for more an experience than a game. It is not very deep, and it is less fun when players take it too seriously. However, what Tokaido offers is a zen, elegant experience.