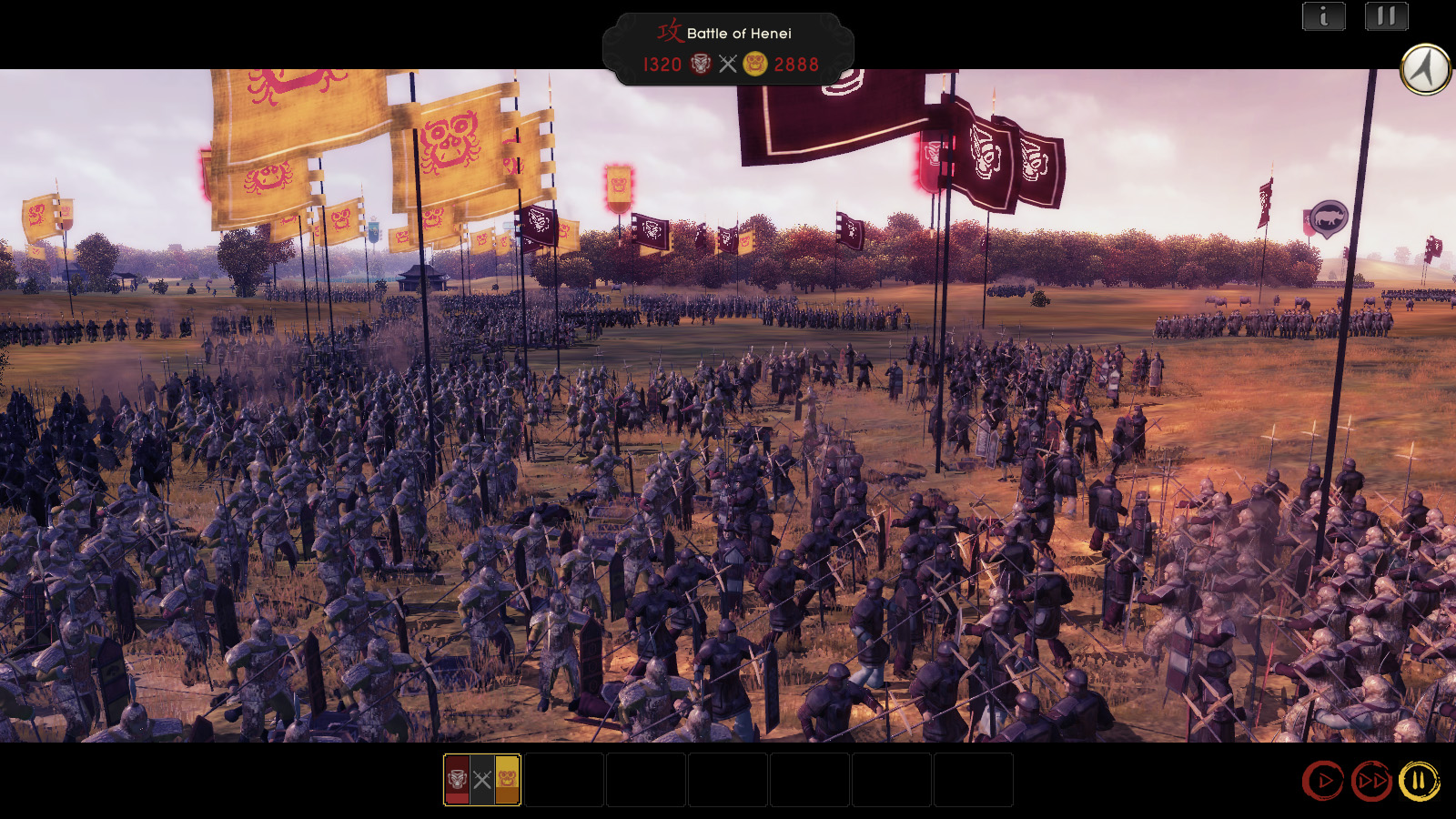 Oriental Empires has all the right ingredients to be a great turn-based 4X strategy game. It’s an ambitious first title for developer Shining Pixel Studios, and when it comes to the look and feel of the game, it really does shine. Unfortunately, the inefficient (if pretty) user interface, unpredictable AI, randomized nature and lack of a tutorial make it difficult for me to recommend.

Set in Ancient China over three periods—Early Bronze Age, Warring States Era, and Imperial Era—Oriental Empire’s basic goal is to build an empire by exploring a map divided into hexagonal spaces. It nails its aesthetic, featuring a classical Chinese soundtrack, beautiful landscapes, and detailed towns (if you zoom in closely enough, your settlements’ inhabitants go about their business, though they’re mostly idle). It clearly appreciates the history it’s trying to emulate, and feeds you trivia about the period from time to time.

One of my peasants, doing–whatever peasants do.

After choosing one of 16 factions (though only four of these are available at the start), your work begins. You carefully select your settlements based on the protection and resources they offer, constructing buildings, converting forest to farmland, and improving your empire’s Culture and Authority.

You can steer the specialization of your empire in a few key ways, such as technological advancement. You can queue up advancements (comprising the realms of Power, Thought, Craft, and Knowledge) through a mahjong-tile themed menu, which nets you new abilities and Authority and Culture points.

Authority and Culture are the two statistics that impact how your population and rival states view your empire. Authority measures “your central government’s ability to impose its will,” and if your number of points is lower than your total number of settlements, it will cause significant unrest among the nobility. Culture points affect the general happiness of your population, as well as the value of trade between settlements.

As you explore the map, you’ll bump into other empires, bandits, and even the occasional encounter, which are opportunities to trade gold for information or advancements. I ended up making alliances with a few other empires, trading with them, and partnering up to take on tougher, less diplomatic enemies.

Map exploration is a bit of a pain. Most of it is invisible to you at the beginning, which is par for the course for the genre, but the problems start when you continually run into impassable mountain ranges and bodies of water. There’s little indication of what areas are more prone to disasters, and resources are scattered haplessly; there’s also the chance you’ll inadvertently catch the attention of less-than-savory parties like bandits or enemy states.

While I understand the meaning behind the madness—the game would be boring if it weren’t for obstacles—the current distribution of land, water, and resources is a little too random to navigate strategically. In one game, I ended up being totally locked in by mountains to the west, an impassable river to the north and south, and a chain of enemy states to the east. I snatched up what little land I could in my square of hexagons.

Diplomacy and war are important mechanics in Oriental Empires. You can request an audience with factions you’ve encountered, or they might journey to one of your cities to ask the same of you. You can also attack each other’s armies or factions at will.  Battles don’t always play out how you expect them to; even against factions dubbed “much weaker” by the game, there’s no guarantee of victory, and almost no information provided whether you win or lose. I had no idea whether or not my investments in better armor and weapons made a difference or not.

Diplomacy, too, has substantial flaws. On one occasion, one of my trading partners asked me to attack a faction I hadn’t even encountered yet (the Zhou) within seven turns. I wasn’t able to discern how this decision would impact my alliance with them, so I accepted. One of my armies attacked a roaming group of Zhou peasants, and the game didn’t count it as attacking the Zhou empire. Their capital was way across the map in the shroud of the fog of war, so predictably, I wasn’t able to honor that agreement, which was pretty frustrating and soured my relationship with my trading partner.

The rival empires also act unpredictably on their own. In my first few games, after agreeing to what I thought were neutral terms, my settlements would be attacked anyway. If that’s an intentional mechanic of the game (people lie in real life all the time, after all) then there must be a better way to convey the ramifications of my decisions when I make them. Especially in the early game, encountering different factions seems to be a surefire way to lose before you’ve even begun.

The consistent absence of basic information is my biggest gripe with Oriental Empires, and the most glaring example is the lack of a fleshed-out tutorial. There’s an in-game guide I read front to back when I first started playing, but it spends much of its time defining terms out of context. It tells you what you need to do to make your empire successful, but not how to do it, or in what speed, or in what order. To me, it seemed as if it had been written by someone who was well-versed in the game’s mechanics  but didn’t think about how it would read to the intended audience of new players.

Even after reading and re-reading the guide, I had some questions: Should I focus on building up my capital’s population first, or expand immediately? What are “local factors” and why are they making the peasants unhappy? Should I keep my armies at my settlements, or use them to explore the map? Should I conquer the first empire I encounter, or avoid them? What the hell is qi, anyway?

In Oriental Empires, you can develop your empire’s technology over three distinct periods.

A dedicated tutorial map would really improve this, particularly for new players who may have never even played this type of game before. (Incidentally, I had only dabbled a bit in Civilization, so as you can imagine I was pretty confused.) Especially with strategy games, tutorials are essential; there’s a lot to learn, and it’s easier to do when the information is being fed slowly.

UI improvements would go a long way. The simplest way to do this would be contextual hover text and streamlined menus. A centralized menu to view all pertinent data could also be beneficial to the overall experience. As it exists now, it feels unwieldy trying to find even basic statistics about my empire.

It’s a pity that these flaws exist because Oriental Empires is otherwise a technically sound and well-polished game. I didn’t encounter any bugs, and the game itself is fun to play.

After a few hours of trial and error, I’m happy to say I found my footing. I had 100 or so turns of peace, with fraternal agreements with three major factions. I founded five settlements, had a healthy net income every turn, and was beginning to specialize and fortify each of them. It was glorious while it lasted. Then one of my trading partners inevitably betrayed me, sacked my adjacent settlement and set off a string of dominoes that ruined me.

I suppose there’s a history lesson in there somewhere.

Oriental Empires is a solid, detailed first effort from Shining Pixel Studios that fans of the 4X strategy genre will enjoy. Unfortunately, newcomers and veterans alike might be disappointed by the unwieldy UI, unpredictable systems and lack of in-game tutorials or explanations.

Taylor is as eclectic as her taste in video games, and she appreciates aesthetic and a good OST. She has a BA in International Business Management she doesn't know what to do with, and until recently helped immigrants and refugees learn English.
Related Articles: Oriental Empires
Share
Tweet
Share
Submit