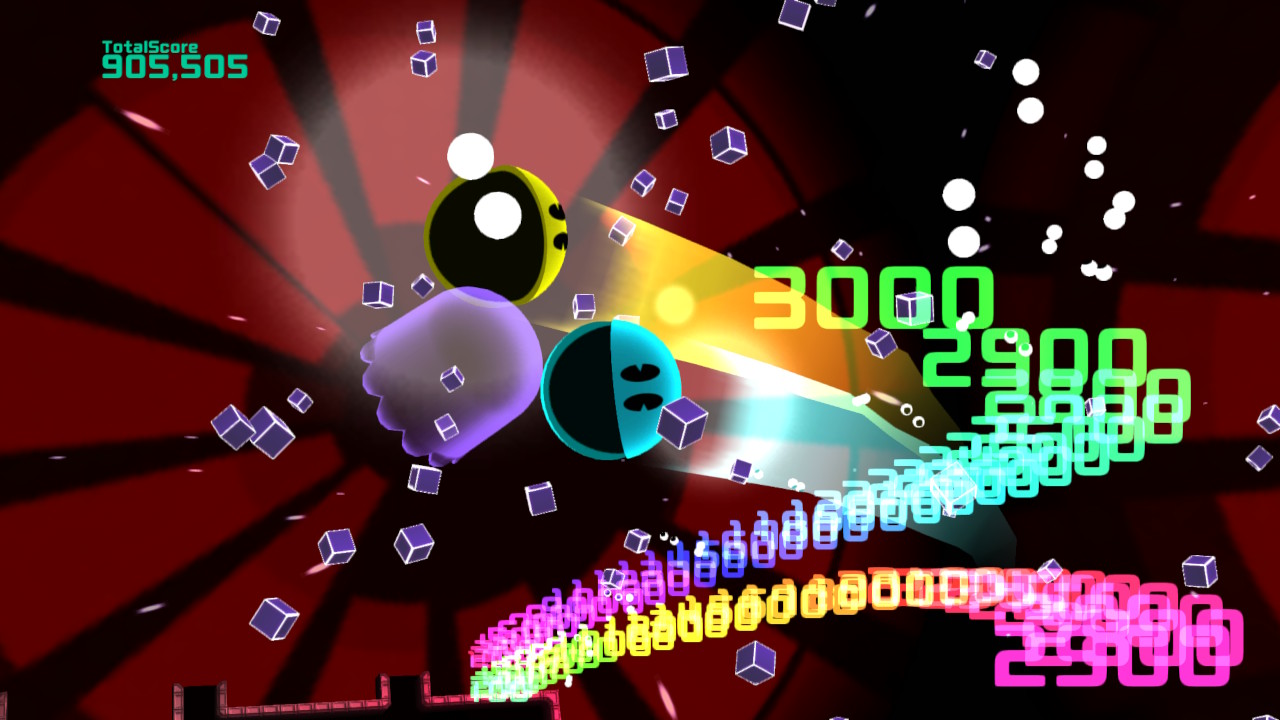 Pac-Man is a game that needs little introduction. You’re Pac-Man, you gobble down dots, eat fruit, get chased by ghosts, find power pellets, and eat the ghosts. Over the years, Namco has tried to experiment with the series in unique ways. One of these ways was with the Pac-Man Championship Edition series. The series’ latest entry has arrived on the Nintendo Switch in the form of Pac-Man Championship Edition 2 Plus, but is it worth gobbling down, or does it fall flat on its back?

In the previous Championship Edition games, players go after a set trail of pellets rather than attempt to clear the entire map at one time. With the mix up of having pellets in different spots, the game doesn’t have to rely on the usual four ghosts chasing the player, but can add new hazards such as a long train of ghosts growing as you run through the map.

Pac-Man Championship Edition 2 Plus builds on this and expands it by focusing less on players finishing dot paths, but rather by gathering a certain number of dots and making a single fruit appear at the starting point to move on to the next stage. As the stages progress, players may get the opportunity to turn the tables and gobble down ghosts, as power pellets are not around the stage as much as they were in the first Championship Edition.

Unfortunately, these ghost chasing segments often break up the pace of the game. When a power pellet replaces a fruit at the end of the board and is eaten, the ghosts turn blue and rush around visible paths. The player must then corner these ghosts on the paths. Where the pace is broken up is with the randomness the ghosts take on these paths. It’s hard to tell where the ghost will go, causing chance in a game where you’re competing for the highest score worldwide.

Chasing these ghosts can lead to a spectacular finale of the chase if the ghost has a long enough train. This can sometimes activate a “gobblefest,” where the 3D model of Pac-Man pops out with the ghosts in a spectacular display of points and satisfaction. This feeling is even greater in the two-player mode.

Exclusive to the Nintendo Switch version of this game is the multiplayer feature, given its own mode as Pac-Man Championship Edition 2 Plus 2P. This mode is unfortunately lacking in content. While the single player game has a wider range of score attack modes to choose from, additional difficulties, the ability to practice, and an adventure mode, Plus 2P only has 6 stages to choose from.

However, the gameplay does differ from its single player counterpart. Playing with either a strangely competent CPU controlled second Pac-Man (not Ms. Pac-Man, unfortunately), or a human partner, both players eat all of the dots shown on the stage and run into each other to earn fruit and move on to the next stage. With a CPU player, the game will slow down if the player is nearing a ghost, however, if the player is playing with another human, that Pac-Man can be captured and saved within a certain amount of time.

Chasing ghosts is still based on luck like it is in the main game, but the gobblefest has a larger payoff visually. One player runs into the ghost from the front, but then the second player has a time limit to reach the other end of the ghost train. What ensues next is Lady in the Tramp inspired gobblefest similar to the gobblefest in single player, but with a second, bluer Pac-Man. If the ghost isn’t eligible for a gobblefest, they can be pushed into the center of the stage where both of the Pacs will squish them together.

Another addition to Plus 2P mode is the inclusion of bosses in a platformer-esque style. Unlike Adventure Mode’s bosses where players simply went through stages normally and grabbed a power pellet at the end to take out a large ghost, both players are suddenly brought into a 2D platformer-esque area with new controls including jumping. After all of the pellets are eaten, a power pellet appears and the giant ghost looming around the map can finally be attacked. These bosses don’t require a great deal of cooperation, but they are enjoyable.

Of the six stages available for co-op play, one of them is considered a boss rush, meaning players can fight through as many bosses as they can using this new control style. It would be cool to see more stages use this platforming style, but it’s a wasted opportunity.

When Pac-Man Championship Edition 2 original was released on PC, there were complaints about how poorly optimized the game was. Fortunately, the game seems to run smoothly on the Switch when it is docked. There have been a few moments when in handheld mode when the game experience slight slowdown, but these moments happened very rarely.

Overall, the main appeal of Pac-Man Championship Edition 2 Plus is racing for the high score globally either alone or with a friend. While this version may be more expensive than the current Steam version of the game, it does come with the Plus 2P mode exclusive to the Nintendo Switch, but that only has six different stages to choose from without any other variations.

Pac-Man Championship Edition 2 Plus performs well on Switch, with only a few fits of noticeable slowdown while in handheld mode. The Plus 2P mode is a nice addition, but sadly lacks the content available in the main game. If you’re looking for a fun and quick distraction for a few minutes every once in a while, this game may be right up your alley.

Sean Anthony likes to combine two of his passions: gaming and writing. Gaming has been a huge part of his life ever since he played his first game as a child, Kirby's Adventure. He aspires to have his name attached to an article that makes the whole world go, "Huh, that's neat, I guess."
Related Articles: Pac-Man Championship Edition 2 Plus
Share
Tweet
Share
Submit