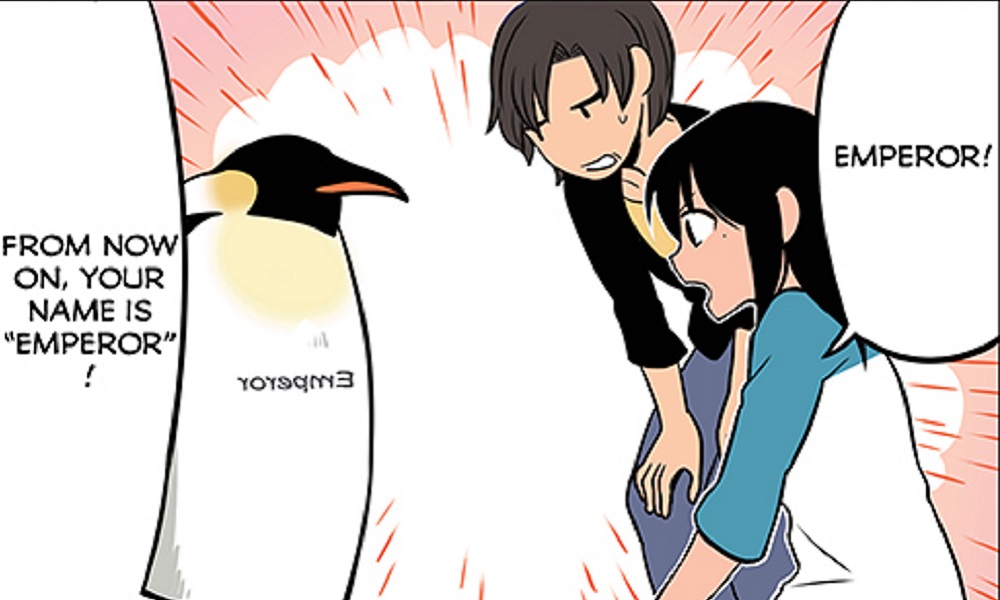 Sunday funnies (and, by extension, 4-panel Japanese comedy) are a throwback to a simpler time, back when lighthearted and straightforward plots warmed the hearts of readers every week. While I do enjoy complex comics and manga, I love going back to basics, and Mato’s The Emperor and I satisfies that simplistic slice-of-life fix nicely.

The Emperor and I begins with our protagonist Kaho Minami finding a big surprise in her fridge: a huge emperor penguin. Unsure of where he came from, Kaho decides to take care of he as he acclimates quite well to the house Kaho’s family lives in. Throughout the first volume, Kaho deals with the newly named Emperor as her family tries to understand their new pet. It’s a simple premise that is very light on plot, but there is a continuous narrative that is apparent within the first volume. Kaho also ponders upon how outsiders would react to the revelation of a penguin living at home, as neighbor Kosuke discovers Emperor near the end of the volume.

Unlike most traditional manga, The Emperor and I is in full color, a decision that works pretty well for the style of the story. The soft coloring is easy on the eyes and doesn’t create a sense of tension when reading, which is good because the manga is a lighthearted slice-of-life story rather than an action-based one. The art style is a mix between a 4-koma and something you would find in a newspaper funnies section; it’s not too detailed, but there remains beauty in simplicity.

In contrast, the most detailed character here is Emperor, of whom Kaho describes in detail, from his fur to how he likes to sit and retain objects underneath his lap. Kaho notes how scary he can be when he opens his mouth to eat fish, and thus the art style matches her horror at the situation. The attention to detail on Emperor compared to the rest of the characters is a pretty neat touch, as it highlights the absurdity of having a penguin in suburbia as well as making Emperor distinct as a character. For a wordless animal, he has quite the presence.

The stories themselves are split into chapters in this volume, with multiple strips in each. While there is a cohesive narrative within the story, its mostly standalone plots make more sense as a sitcom. We get to follow Kaho as she introduces Emperor to her father, deals with having a heavy animal sleeping next to her like a puppy, and even tries to potty train him (which hilariously ends up with Emperor just using a toilet like a human). It’s all-ages fun that is heartwarming and doesn’t take itself too seriously. In another example, Kaho gets concerned that if anyone else knew about Emperor, the public would treat him like an alien, take him away and do some unethical experiments to him. Her parents are less enthused at the prospect and shrug it off. In any other manga, this might be a problem, but here, it’s treated more of a cutaway gag than anything else.

I love the dynamic between Kaho and Emperor, you can see the undying determination that Kaho exudes and how she wants to take care of her new friend. However, there is a lack of interesting supporting characters as well as the fact that the pacing seems a bit off in the beginning. While I do enjoy how Kaho and Emperor interact, it feels like the other three characters (Kaho’s mom and dad as well as Kosuke) are just there to react to the duo’s antics. Additionally, I would love more backstory to Emperor’s arrival, as the story just puts him in a fridge just for fun. If you’re wondering how he got there, you’ll have to wait for a bit.

The Emperor and I Volume 1

The Emperor and I is a heartwarming manga that brings beauty in its simplicity. Its soft colored art style mixed with straightforward yet distinct comedic strips make the first volume of this story a highly recommended debut.

Elisha Deogracias is an aspiring accountant by day, freelance writer by night. Before writing for Gaming Trend, he had a small gig on the now defunct Examiner. When not being a third wheel with his best friends on dates or yearning for some closure on Pushing Daisies, he's busy catching up on shonen manga and wacky rhythm games. Mains R.O.B. in Smash. Still doesn't know if he's a kid or a squid.
Related Articles: Beyond the Page, The Emperor and I Volume 1
Share
Tweet
Share
Submit